There isn’t much in the way of new information in Motor Trend’s article about the upcoming Lexus hybrid, but it did include this beauty of a mockup sketch: 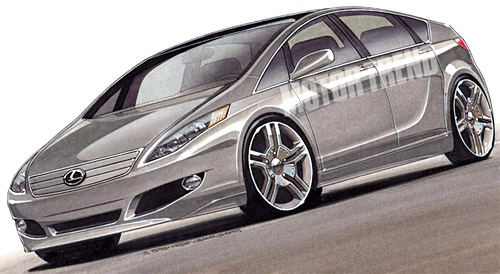 There were a few new points covered, though they seem entirely speculative:

The difference between the Lexus variant and the Prius itself — as is generally the case for Lexus models with Toyota underpinnings — is not expected to be much more than skin deep. The as-yet-unnamed Lexus will have its own body panels and may get a convertible variant, but both vehicles will be fitted with roof-mounted solar panels and nickel-metal hydride batteries upon launch.

I have to say, if the new Lexus hybrid looks anything like this sketch, it’s going to be hugely successful. There’s certainly a hint of Prius in the shape, but the more aggressive front-end and huge wheels remind me of the new VW Scirocco, only bigger and with two more doors. And that’s no bad thing.

Lexus LC ConvertibleUSA
All proceeds to go to charity.