Just one day after posting a Best Car rendering of the rumored Lexus LFA II, we now have this Mag-X photochop of a possible SC convertible based on the LF-LC concept (click for a larger version): 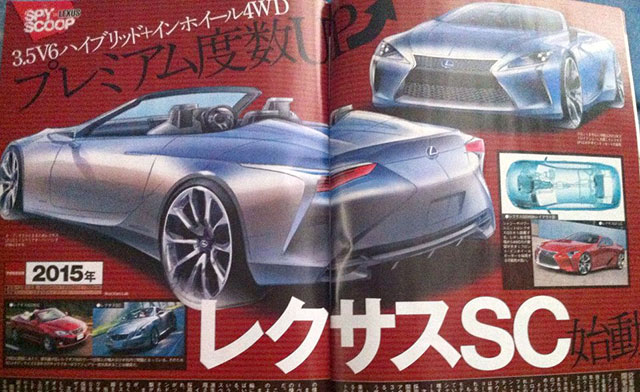 While it’s almost certainly pure speculation, the surrounding Japanese text suggests this next-gen SC would be powered by the same 3.5L V6 hybrid powertrain found in the GS 450h — a sensible choice, I suppose, but hopefully only one of the available engine options.

I’m reminded of a quote from Kevin Hunter, the president of Calty, where the LF-LC was designed:

“It would have 500hp as a hybrid with a battery pack behind the rear seats and a little trunk to be as useful as any car in its class,” he says. “And while this is truly a concept car – it’s where Lexus is moving and symbolises that change – we never build a concept car just to make a car, there’s always some strategic thinking behind it.”

That’s more in line with my thinking — any LF-LC based production model would sit beside the LS at the very top of the Lexus lineup, and should share the same V8 & V8 hybrid powertrains (though I wouldn’t have a problem with a V6 hybrid option in either car).

Gotta love that sexy LF-LC to be the next SC !!!! Just go on Lexus. Go on! [+]
I think I might gonna try design some SC concept with latest Lexus design language as well , I just did the IS one .

Going from the LF-LC concept....this is what I imagined a likley SC convertible to resemble.....liking it a LOT !    Can't help but believe both coupe and convertible are coming.....dream and hope it is.....
If its going to have 500hp and it looks that gorgeous then the price tag will be above 100k I assume. Anybody know what was the going rate for the SC

I like so much this idea! But, I would prefer that they will continue with the classic style of the SC and not follow the 'L-Finnese' like the ultimate Lexus models...
Awesome! I can't wait!