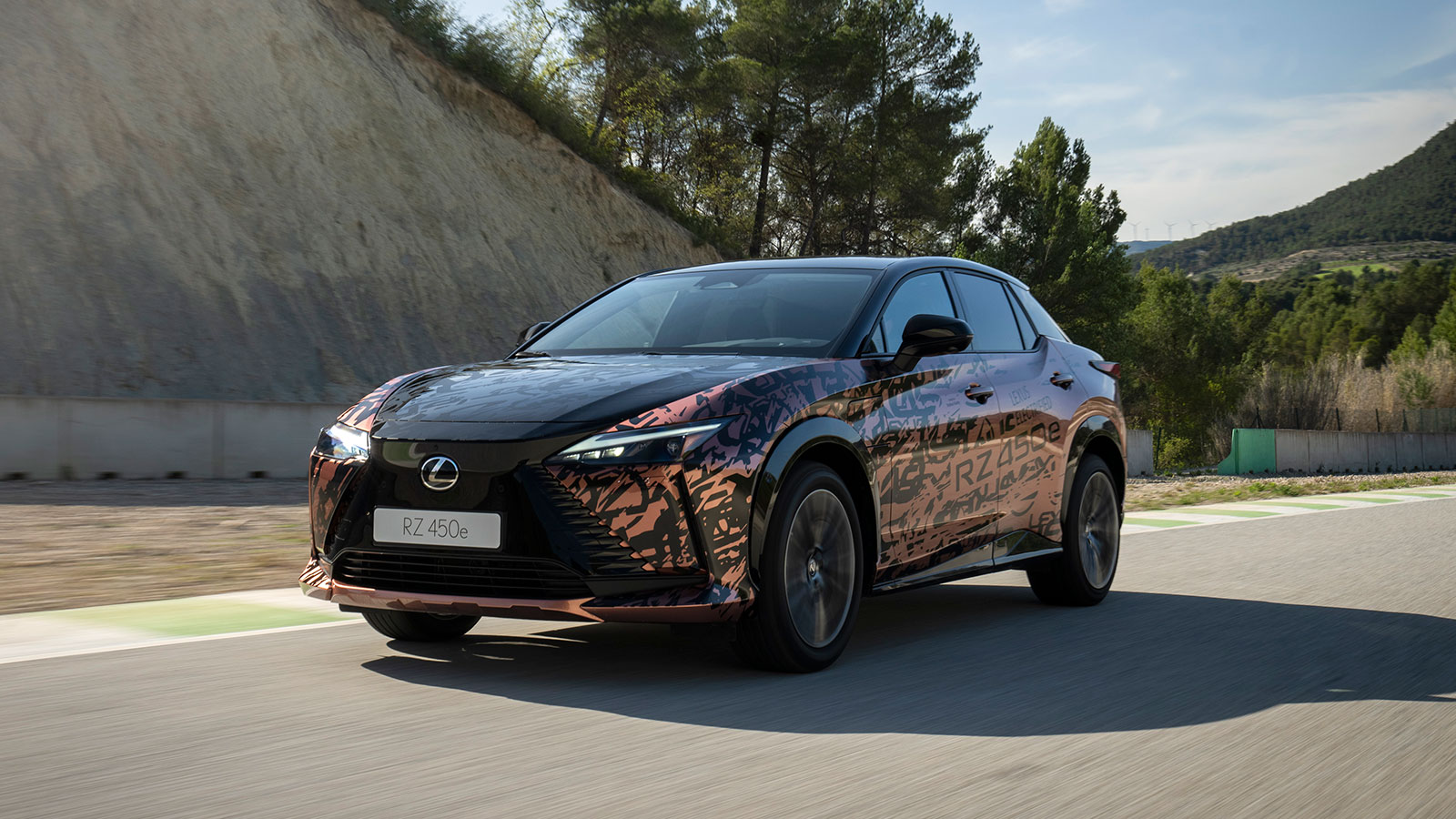 First, let’s set up the event — Lexus invited me to Barcelona to test their newly developed steer-by-wire system in the new RZ 450e. There were only two test vehicles, and they were true prototypes — one model lacked the software to active different drive modes, power delivery was noticeably different between the two, and both had every conceivable warning light flashing on the dash.

This was my first time seeing the RZ in person, and it’s a striking design inside and out. The exterior shows a sharper execution of the second-generation NX, lower to the ground, with a swooping roofline that avoids the awkwardness of other crossover coupes. 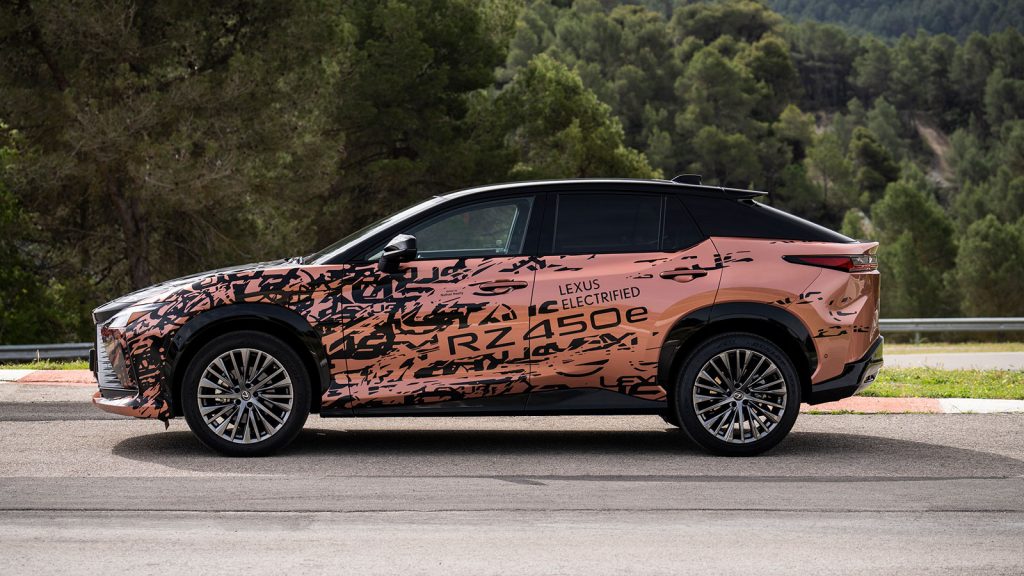 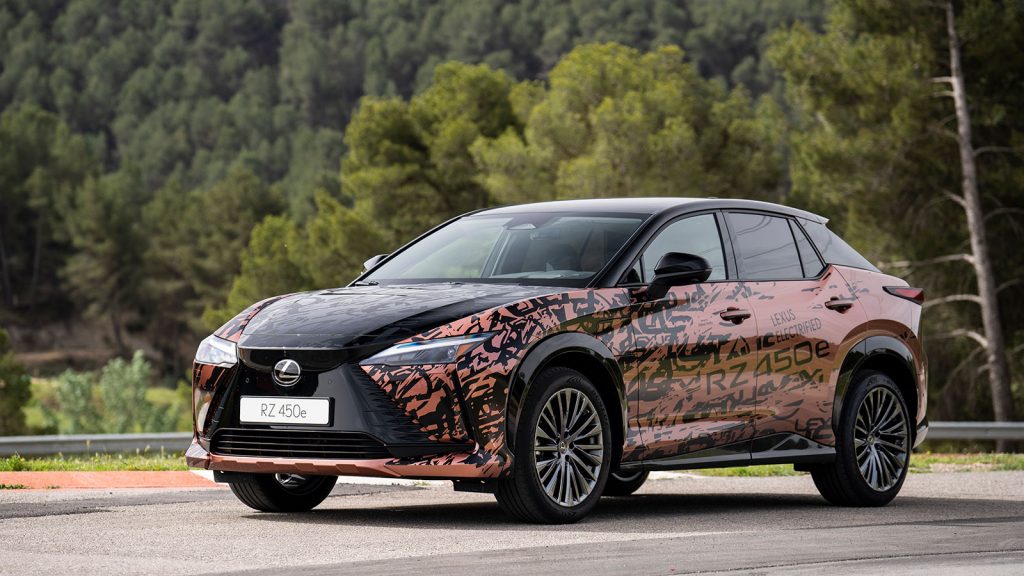 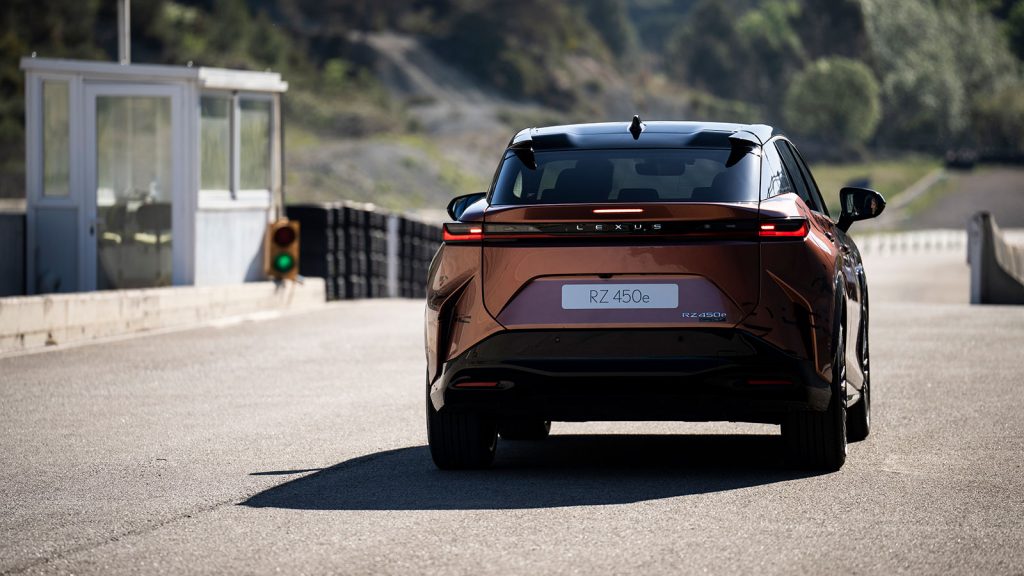 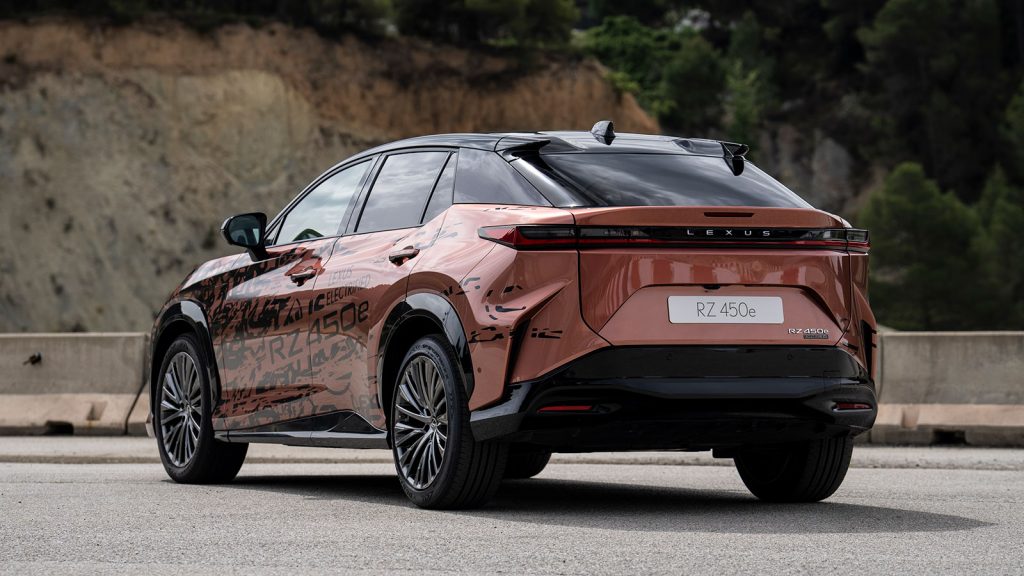 Inside, the RZ takes the Takuza concept introduced with the NX and filters out any extraneous details — the RZ interior feels conceptual in its simplicity, pared down to only the essentials. 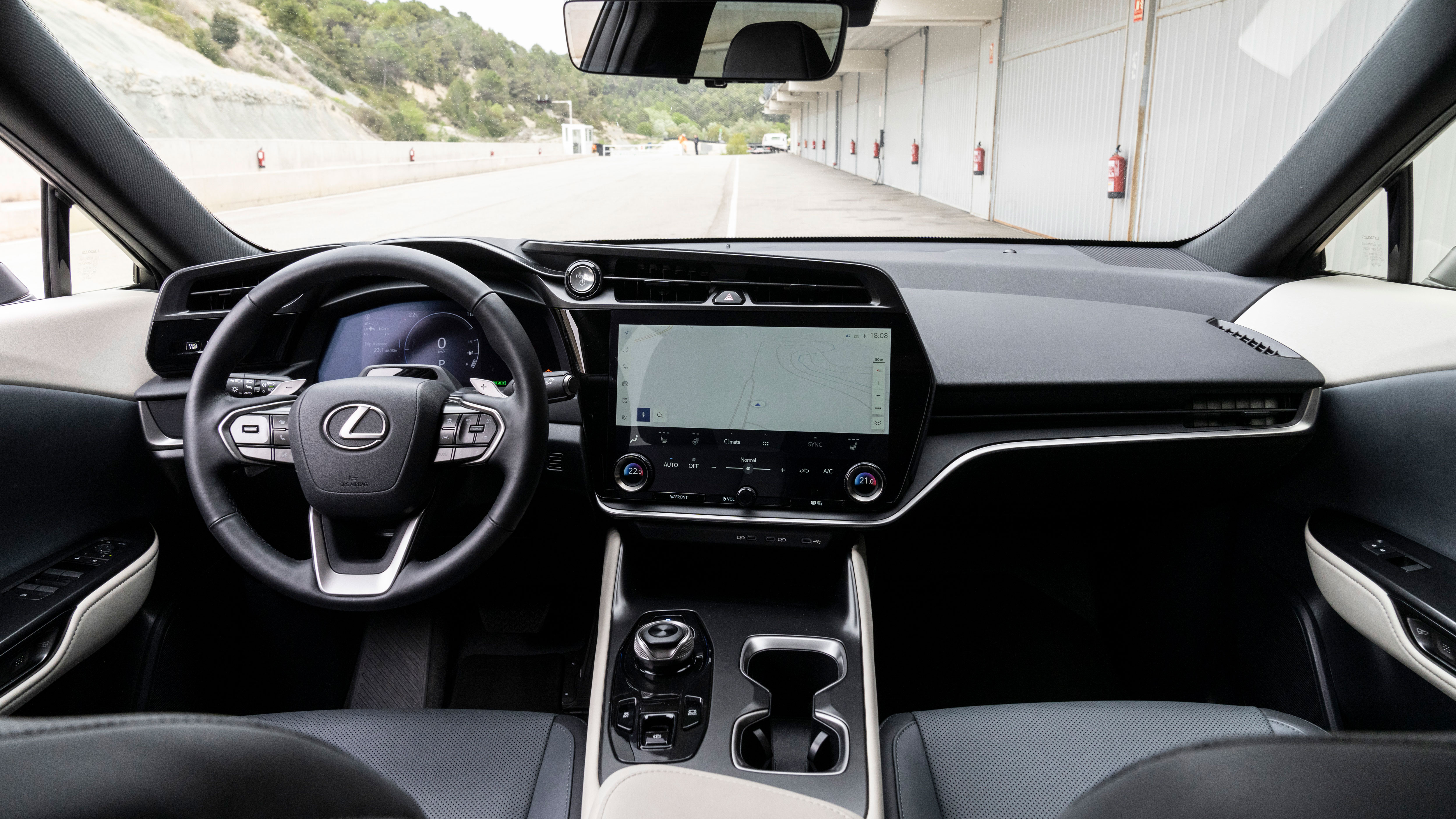 The RZ 450e features the Lexus Driving Signature, the new baseline for Lexus performance built around a Venn diagram of Confidence, Control, and Comfort. There’s a tendency by Lexus to speak in ethereal abstractions, but three core technologies of the RZ demonstrate the LDS concept in more practical applications.

The RZ 450e is twinned with the Toyota BZ-4X as the first two vehicles to be built on the e-TGNA platform designed for battery-electric vehicles. Its low centre-of-gravity and weight distribution is best illustrated by the RZ’s dimensions — shorter than the RX but with a longer wheelbase and more interior space.

As for the battery itself, it’s a 74.1kW lithium-ion water cooled setup capable of delivering 225 miles. This puts the Lexus behind some competitors in terms of range, but also further ahead in efficiency. 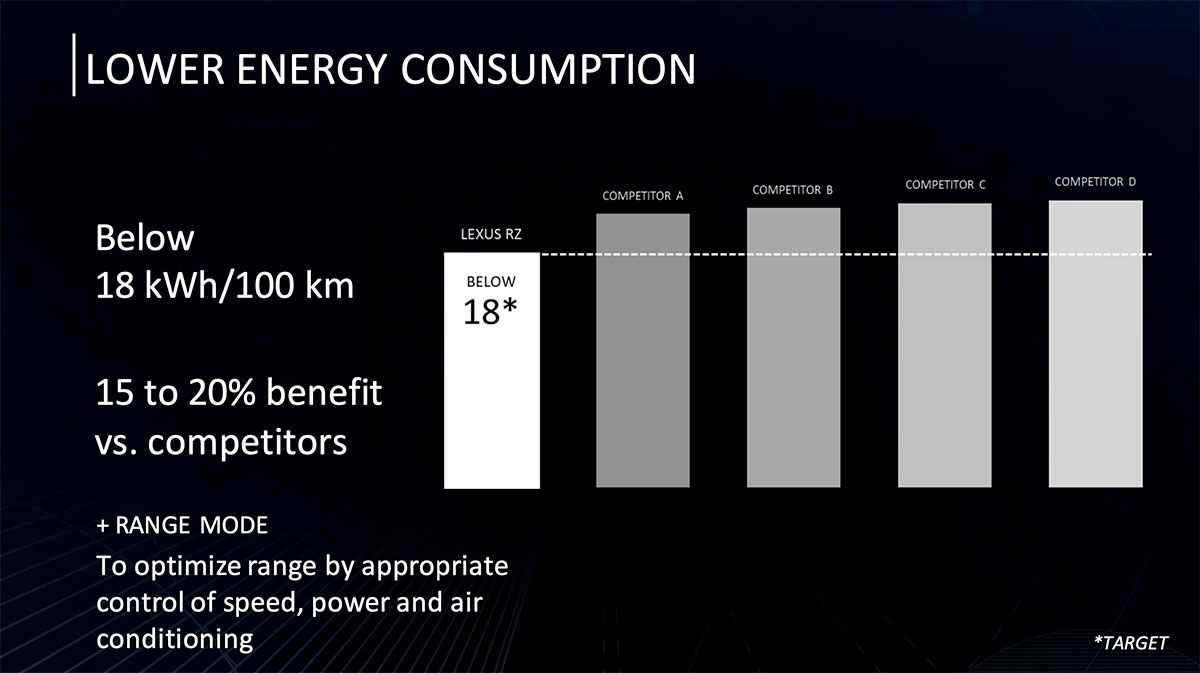 The other impressive statistic about the battery — it’s expected to still have 90% of its charging capacity after 10 years.

DIRECT4 is the next-generation Lexus AWD system, and it debuts on the RZ 450e. It’s a compact and modular package, featuring a high-torque electric motor and transaxle between both the front and rear wheels. 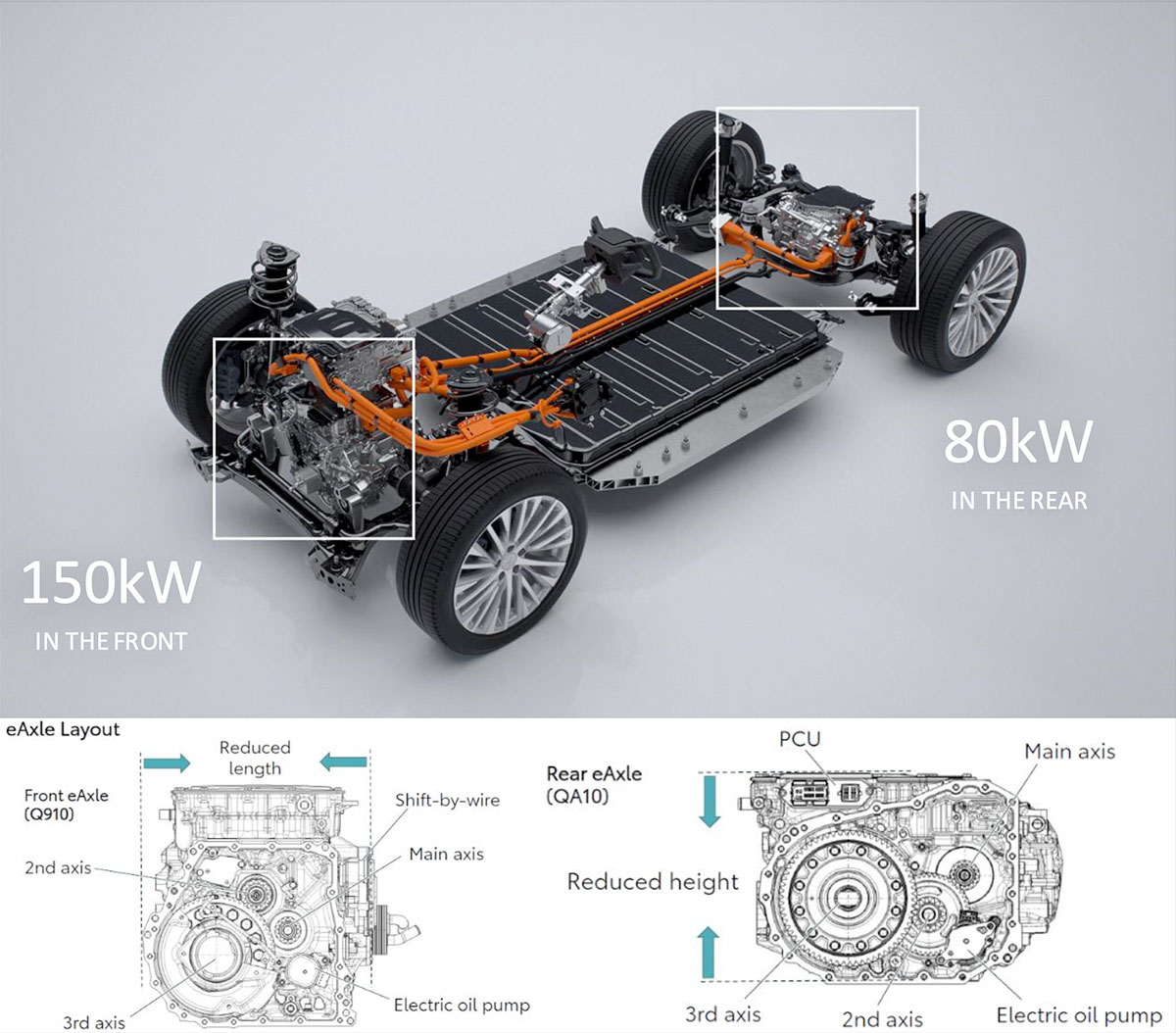 The front electric motor generates 150kW and is mounted vertically to maximize interior space, while the 80kW rear electric motor is placed horizontal for better weight distribution. This makes for 308 total system horsepower and a wide range of possible front/rear torque splits: 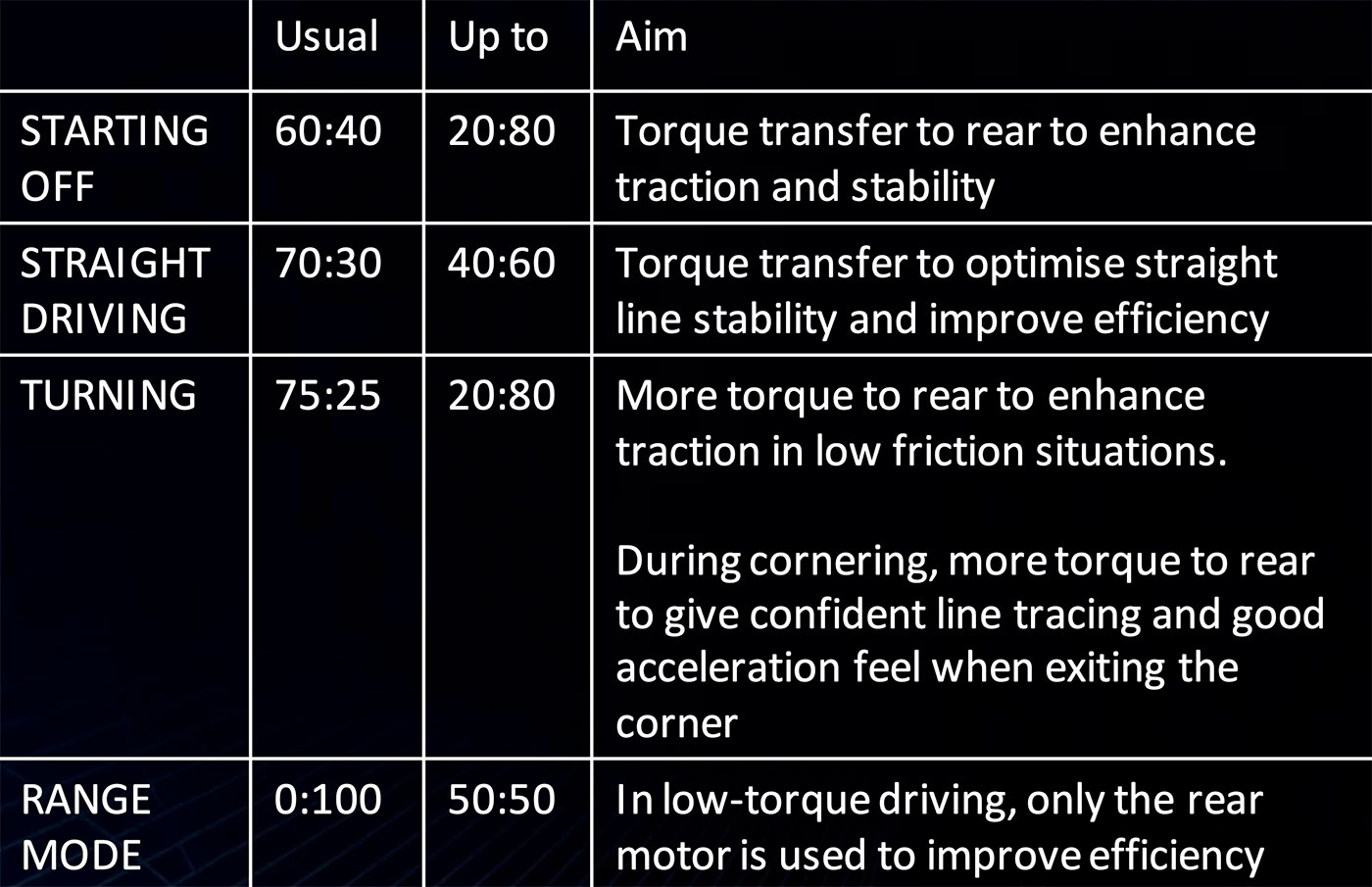 Steer-by-wire is an artificial construct by its very nature, with no mechanical link between the steering and the wheels. Instead, the system works like a real-life driving simulator, continuously sending electronic inputs and outputs back and forth between the steering wheel and the front axle. Any road feel or steering weight is an approximation, and can be dampened or elevated depending on user preference. 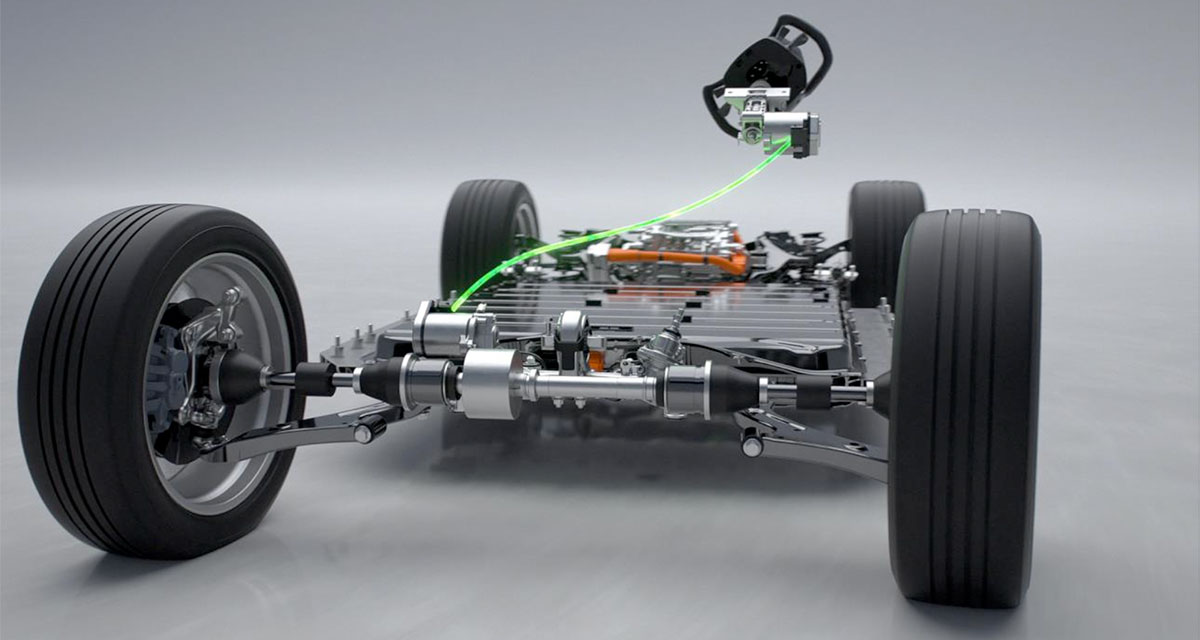 This also means the steering wheel itself is not bound to traditional rules, and Lexus has taken advantage of this fact by introducing a new design that forgoes a full circle for a F1 yoke-style shape. 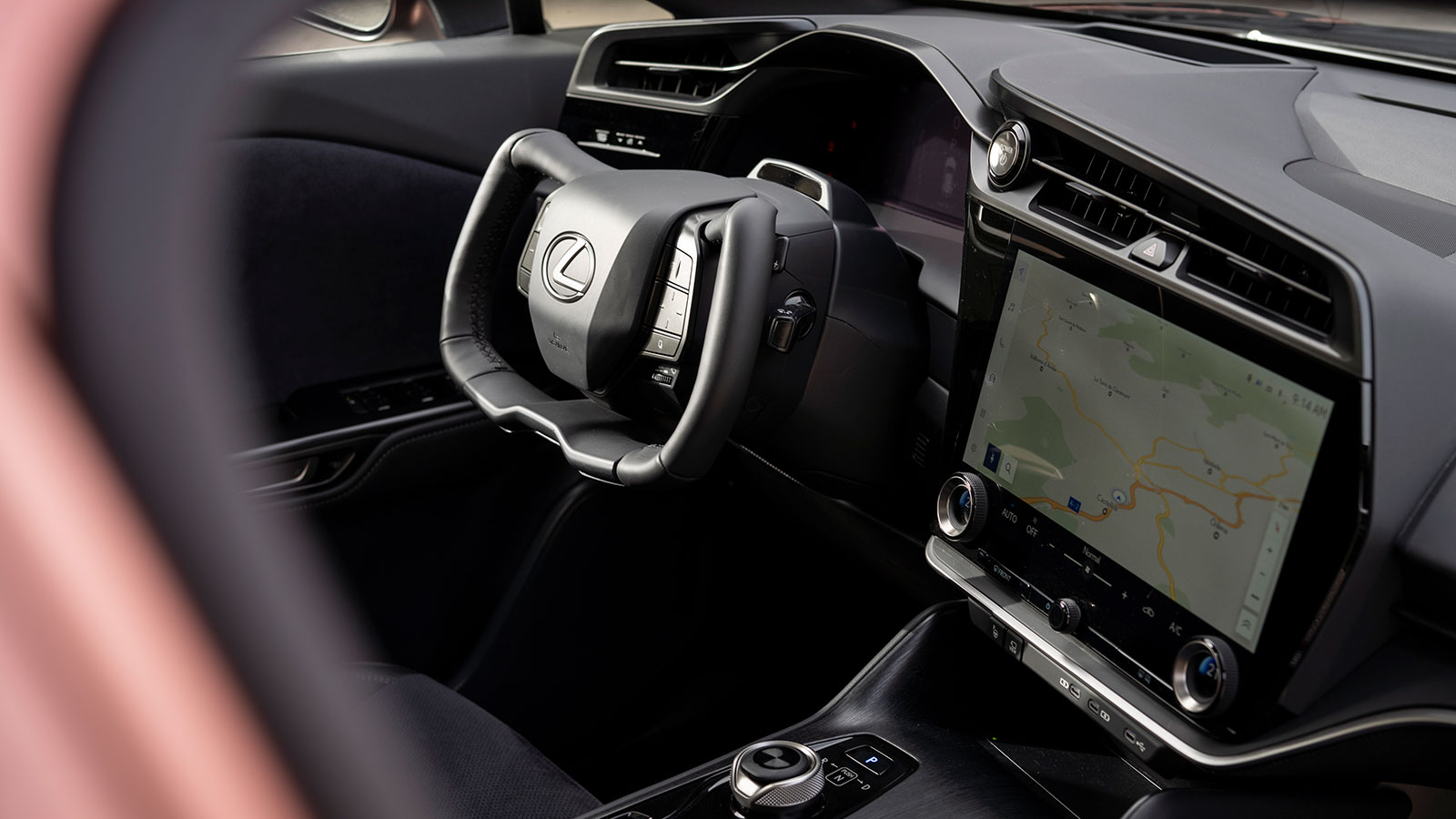 The obvious comparison is with Tesla, who released a similar wheel last year in the Model S Plaid sedan. The difference is substantial — the Tesla wheel is purely cosmetic while the Lexus yoke is variable, meaning the turning radius adjusts depending on speed. The Lexus yoke never goes full-circle, never requires hand-over-hand even in the tightest corners.

For a more visual explanation on how the system works, here’s a video from Lexus:

(Perhaps the funniest moment of the day was Lexus USA representatives explaining that they would not adopt One Motion Grip as the technology name, as the short form was OMG 😱)

When it came to the actual driving, Lexus simply turned me loose on the small track to figure out the yoke wheel on my own. This makes for a disconcerting moment, stepping on the gas while holding something that feels more like a video game controller, but that first corner was all the training necessary. When driving at-speed, there is no difference in the steering of the yoke and a traditional wheel. The more impressive thing was the steer-by-wire system itself — it very successfully transmits the road surface to the yoke, despite there being no real connection between the two. 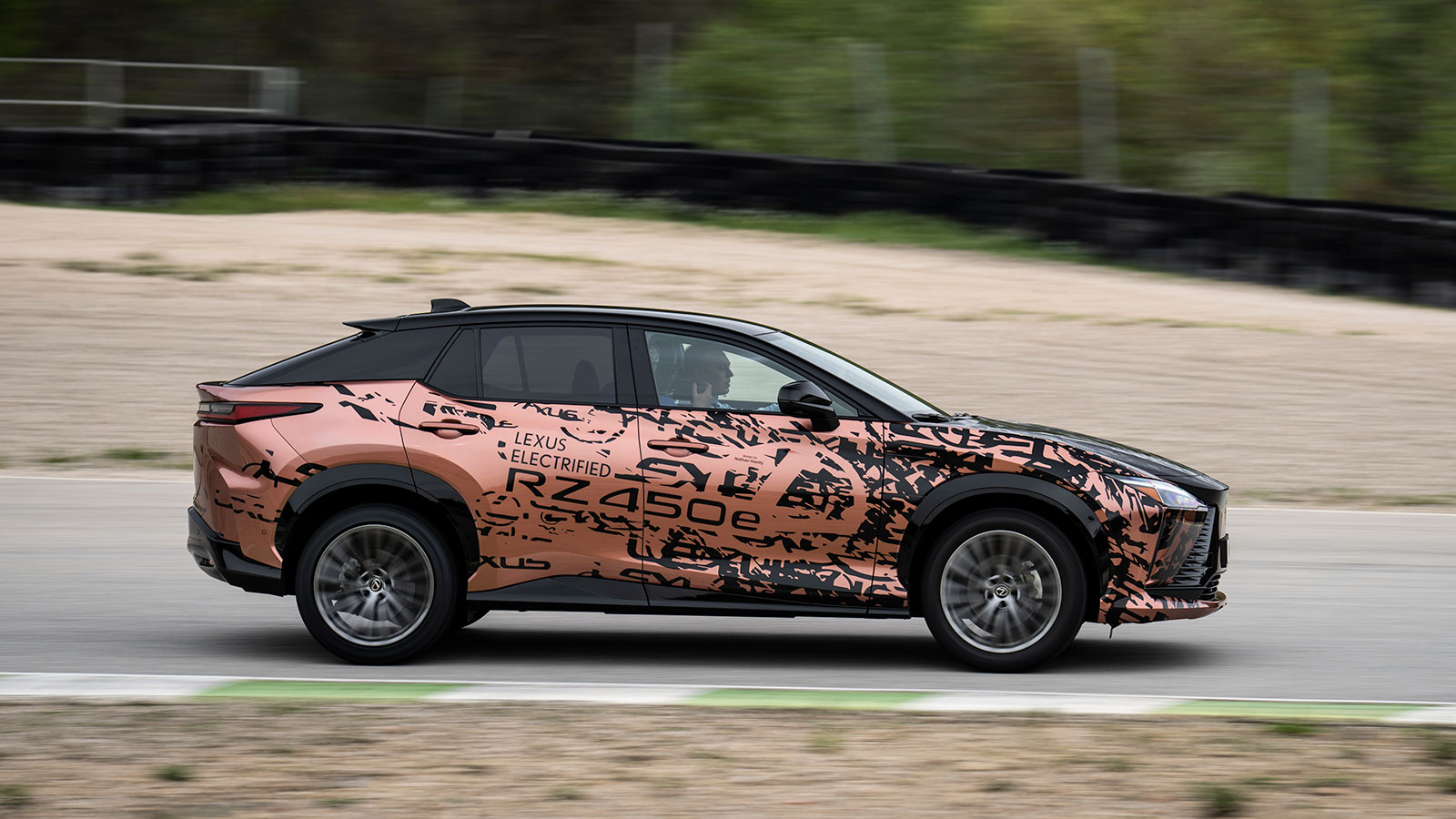 It’s at lower speeds when the yoke wheel reveals both its uniqueness and its learning curve. There may be no real difference in the turning radius between a steering rack and the steer-by-wire system, but the limited rotation of the yoke wheel means faster and more abrupt cornering. I was able to navigate a (very elaborate) slalom course without hitting any cones, but the experience was unsettling. I have to think this feeling would fade away in short order, but it was a reminder that learning anything new requires practise. 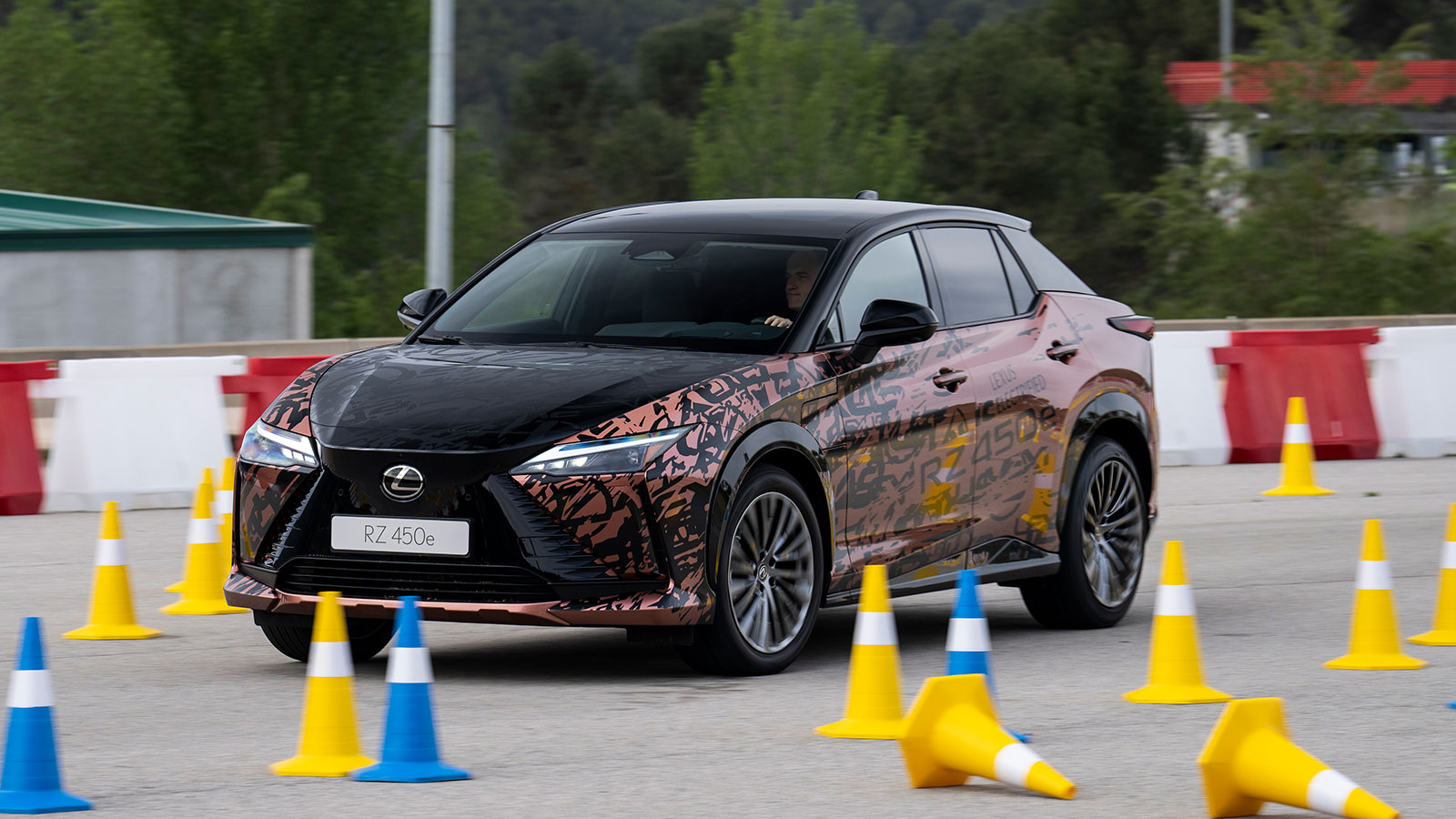 It’s easy to think of this yoke steering wheel as a novelty, an unnecessary reinvention of a functional and timeless design. While this may ultimately be the case, there’s no denying it’s a viable option that streamlines the act of driving itself.

But as impressive as the yoke wheel may be, there’s more to a driving experience. Trying to separate the impact of steer-by-wire from the e-TGNA platform and the DIRECT4 AWD system will require more time behind the wheel, but the early returns of the Lexus Driving Signature

So how much can you take away from seven laps? Let me end on this point — it wasn’t until the last lap that I remembered the RZ 450e is a crossover and not a new sedan. In my fifteen years covering this brand, Lexus has never before put me in a crossover on any track. And that, more than anything, should tell you all you need to know. 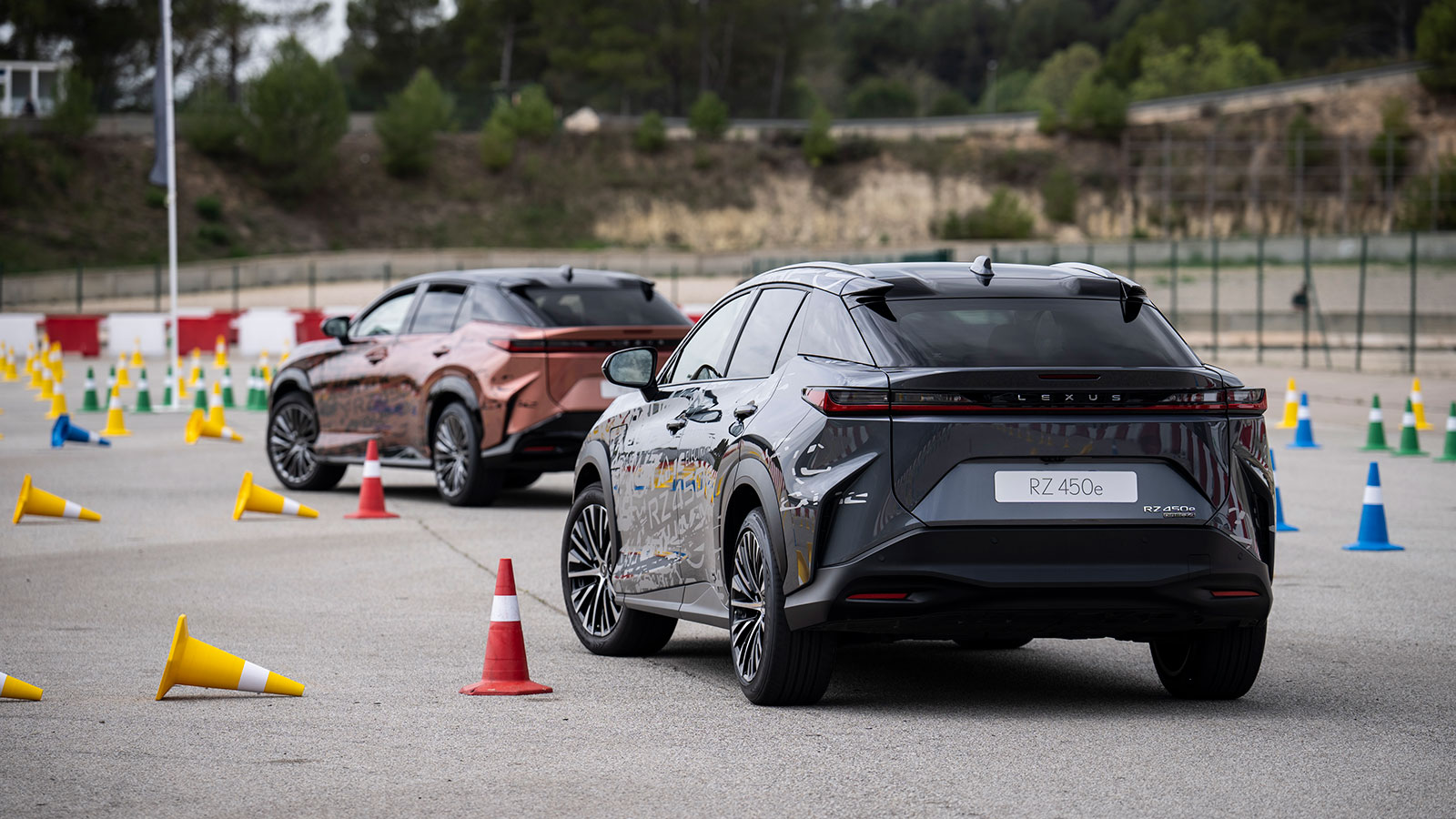 Too bad the US has to wait til next year to get the yoke.
I love your blog.. very nice colors &amp; theme. Did you create this website yourself? Plz reply back as I’m looking to create my own blog and would like to know wheere u got this from. thanks
8joyrt
Driving the NX 450h+