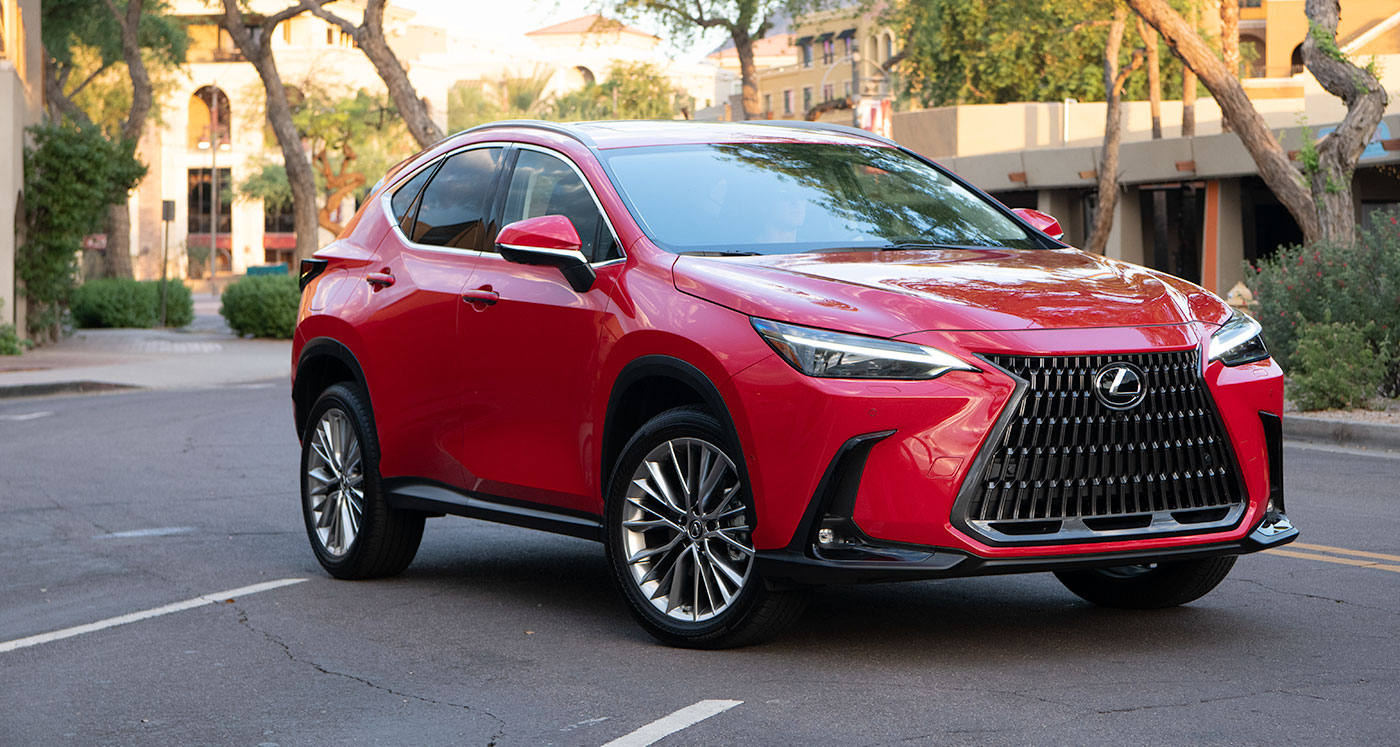 The second-generation Lexus NX crossover will be coming to dealerships this fall with four powertrains and the brand new Lexus Interface infotainment system to go along with its completely redesigned exterior & interior.

Headlining the show is the NX 450h+, the first plug-in hybrid in the Lexus lineup. There’s also the NX 300h hybrid, the NX 350 four-cylinder turbo, and the entry-model NX 250, giving the NX the most engine choices of any Lexus ever.

Just as important is the brand new Lexus Interface multimedia system, which does away with the Lexus Remote Touch controller in favor of a single large touchscreen.

Today, media from around the world will be publishing their first drive reviews of the new second-generation NX, but we won’t be among them. Executive editor Michael Pannone was all set to attend the launch in Arizona, but potential exposure to COVID prevented him from making the trip. For the time being, we will have to rely on the official press release and reviews from other journalists. A full review of the NX is forthcoming.

PLANO, TEXAS (October 7, 2021) –With an extensive list of firsts, from the first Plug-In Hybrid Electric Vehicle (PHEV) in the Lexus lineup — the NX 450h+ — to the introduction of the all-new Lexus Interface multimedia system, the 2022 Lexus NX sets the stage for the next chapter of the Lexus brand.

The Next Chapter for Lexus is centered around four pillars: Design, Lexus Driving Signature, Electrification and Advanced Technology. The all-new NX plays a key role in leading the brand forward on all of these dimensions.

The NX has been redesigned from the inside out. Every exterior surface has been reimagined. The signature spindle grille has been refined in the front. And, perhaps the most notable expression of future Lexus design is the elegant new block LEXUS rear badging and full-width tail lamp.

Lexus Driving Signature results from an entirely new approach to vehicle development. This ensures a uniquely Lexus experience where each vehicle exhibits a direct, linear driving feel that is consistent across the lineup.

For the second generation NX, Lexus doubles down with two electrified options, including a 2.5-liter hybrid powertrain on NX 350h, and the first plug-in hybrid electric Lexus model, the first NX 450h+.

Advanced technology abounds in the all-new NX. Drivers can stay in touch with the intuitive features of Lexus Interface, such as wireless Apple Car Play and Android Auto, Voice Assistant, cloud-navigation capable with Google Points of Interest (POI), over the air updates and available Digital Key. 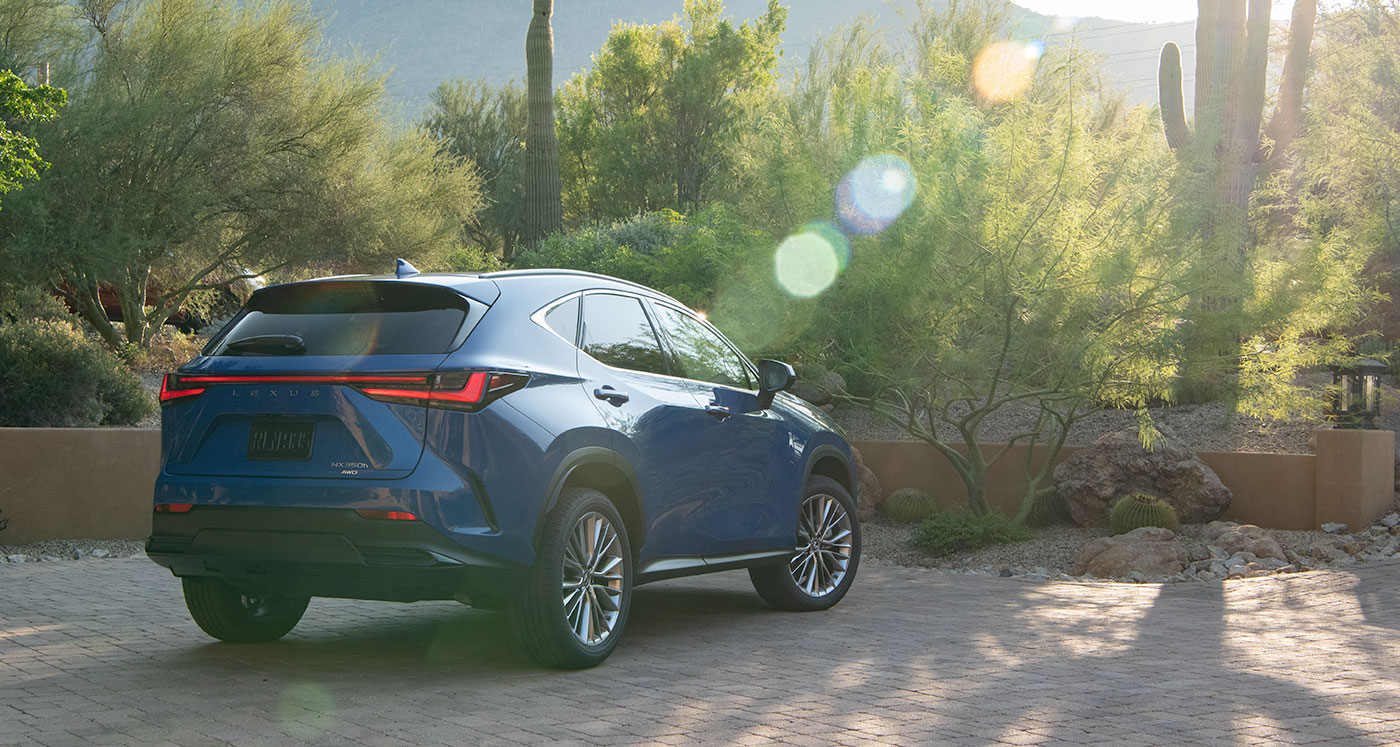 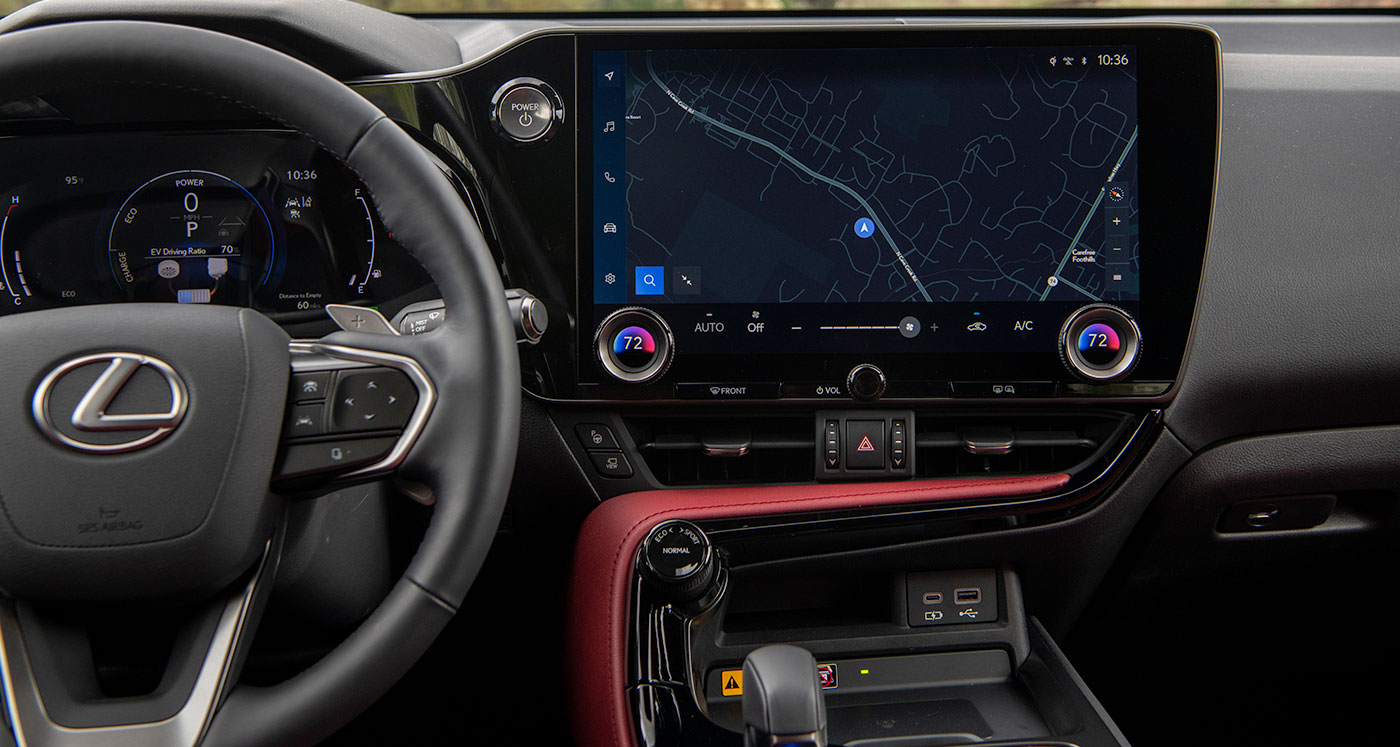 With the ubiquitous use of smart phones, an intuitive and simple guest experience is now possible with Lexus Interface. With the User Profile feature, the driver’s personalized settings and experience can be kept in the cloud and accessed on the go in other Lexus Interface equipped vehicles. Once a profile is created in the Lexus App, guests can use a Bluetooth handheld device, smart key or manual login to access it.

Lexus Interface also incorporates a new Voice Assistant available through voice activation or accessible via a button on the steering wheel. Developed with a human-centered approach, the Lexus Interface Assistant allows for a natural and intuitive way for guests to interact with the new multimedia system. Designed with dual microphones, enhanced noise-cancellation, seat detection and speaker location capabilities, the system enables a voice-first approach allowing front seat occupants an expanded and interactive experience to access media, phone and vehicle settings such as climate control. The available Intelligent Assistant expands upon the standard Assistant capabilities with a Drive Connect subscription. Convenience features such as weather and location-based notifications are accessible, including address and POI search with navigation through Intelligent Assistant. With Wi-Fi Connect, the Intelligent Assistant offers interaction with integrated audio streaming functionality. 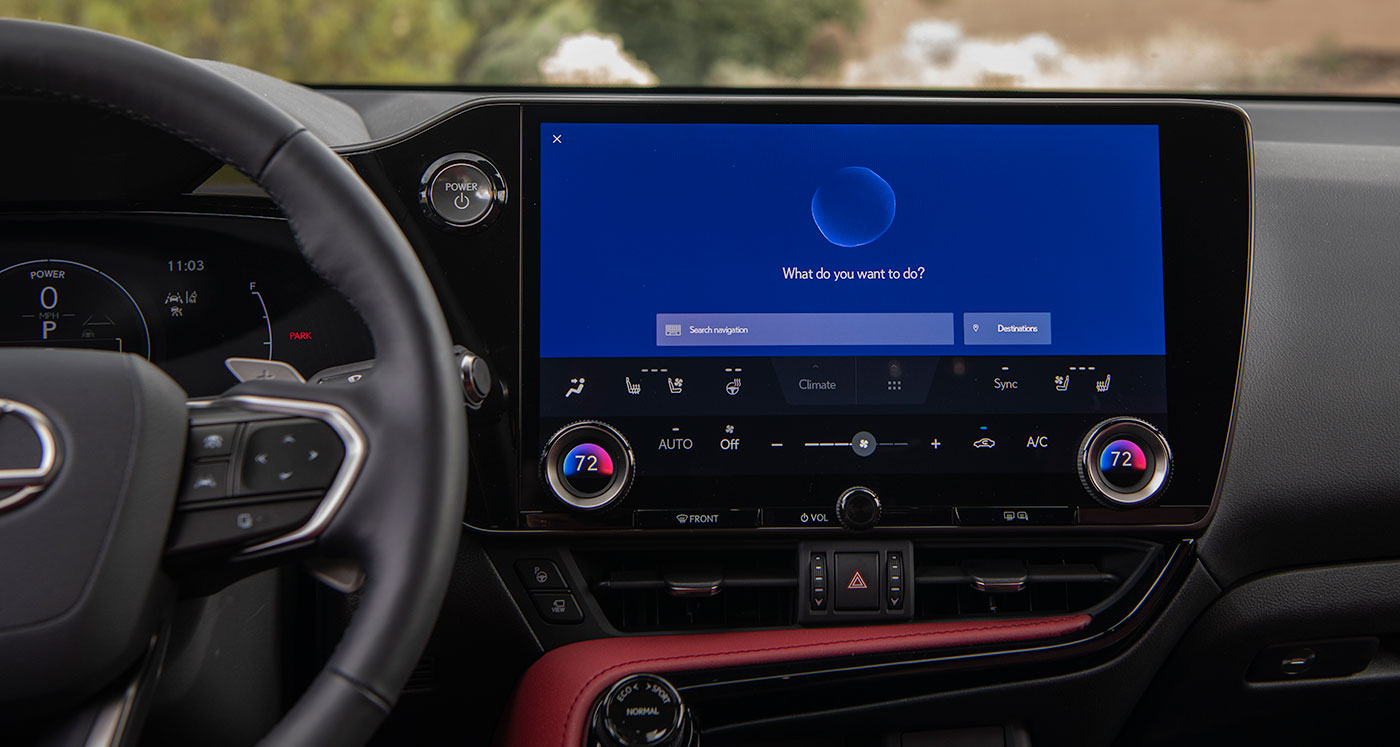 An extension of the User Profile feature, the available Digital Key allows guests the ability to lock/unlock and start/stop their vehicle through their smartphone when within Bluetooth proximity. With Remote Connect services activated the Digital Key can be shared with up to seven more guests, creating a convenient experience for users registered on the Lexus App.

The Lexus Interface Cloud Navigation system was designed with ease of use and functional beauty in mind. Featuring 100 percent cloud capability and integrated Google POI data, the system allows faster and more exact directions and mapping. The latest route and location guidance with Cloud Navigation is included with the three-year Drive Connect subscription, along with Destination Assist and Intelligent Assistant.

Over-the-air (OTA) updates offer real-time updates for mapping, and enriched media experiences. The cloud-based native navigation is also available to occupants with or without a network connection. Offline mode is designed to detect when the vehicle is near or entering an area with low connectivity and can download applicable maps and services in advance.

For 2022, the Lexus NX also features standard wireless Apple CarPlay and Android Auto capability. Guests can charge and stream wirelessly with the new optional wireless charger which can be stowed away to maximize storage.

The NX 450h+ has an EPA-estimated 36-mile range on electric power only, made possible by the newly developed, high-capacity lithium-ion battery. The system achieves the EV output equivalent to a 2.0-liter engine for an EPA-estimated combined 84 MPGe. When combined with the newly developed hybrid transaxle, a 2.5-liter inline 4-cylinder engine delivers on the performance luxury guests are seeking with an estimated 6.0 second 0-60 time. 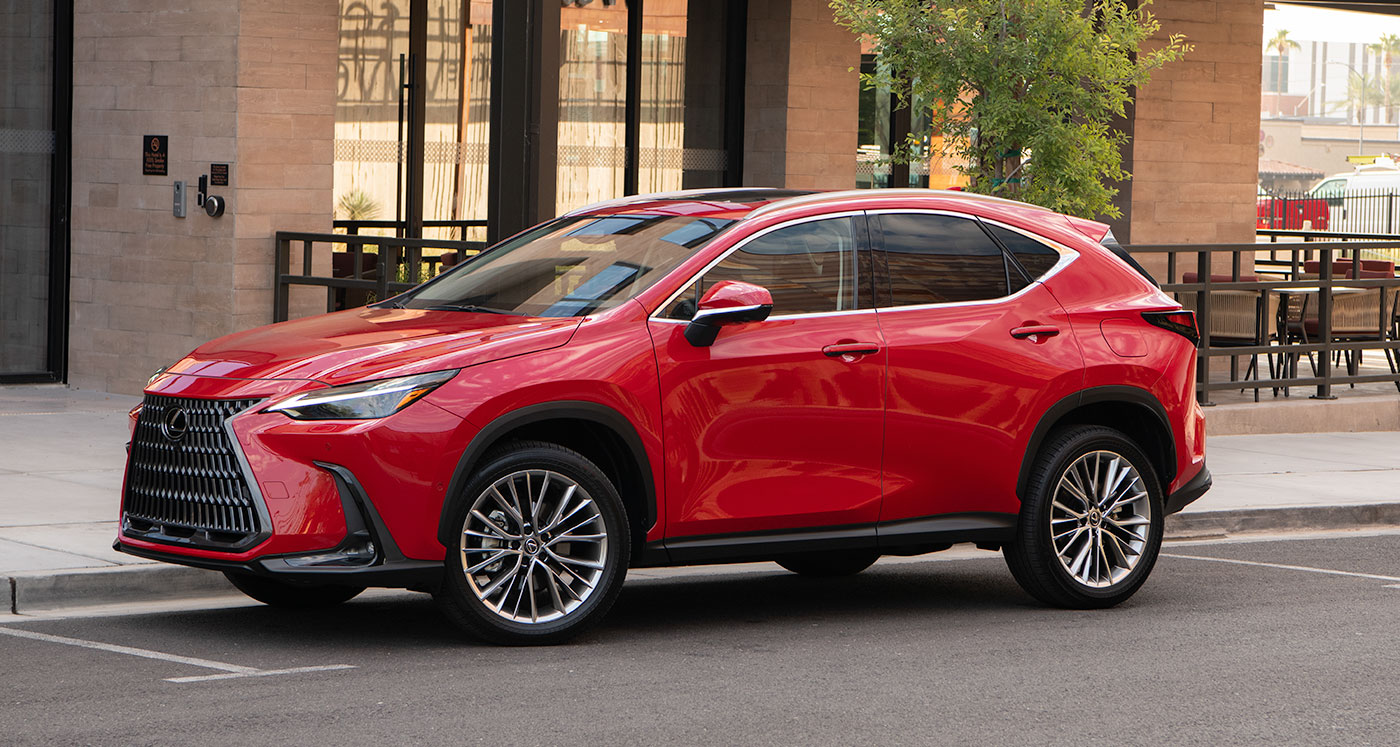 A high-output, high-efficiency system designed to reduce power loss when converting from AC power to DC power results in faster charging times. Using the maximum charging current of 240V, the Lexus NX plug-in hybrid electric can be fully charged in approximately two-and-a-half hours when equipped with the optional 6.6 kW Expedited Onboard Charger. With the standard 3.3 kW on board charger, charge time goes up slightly to approximately four-and-a-half hours. 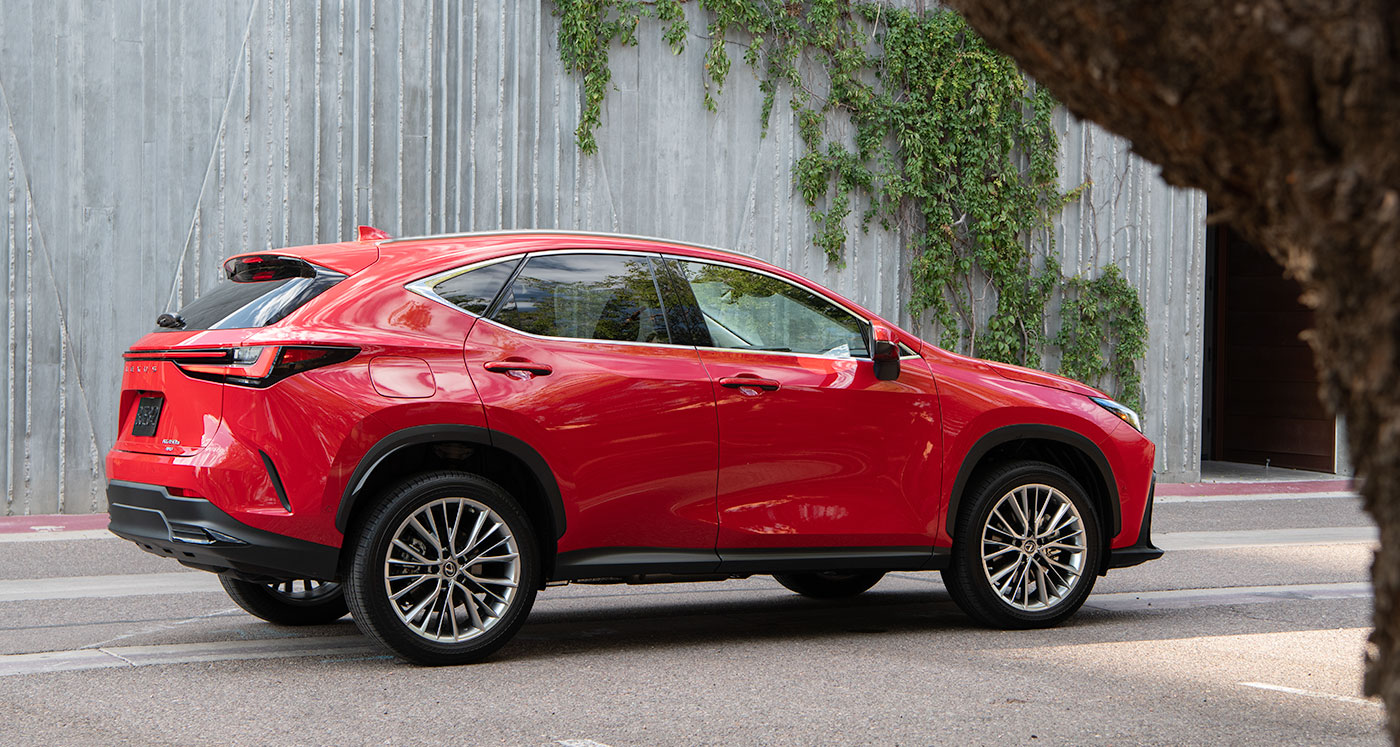 The NX employs an electronically controlled AWD system for a confident, sporty driving experience. Optimizing front and rear torque distribution according to the driving conditions, the driver can control the vehicle as intended. In turns, the NX AWD supplies exhilarating yet elegant control for normal to aggressive driving styles.

The lower center of gravity and enhancements in vehicle dynamics combine for the increased performance of the 2.4L turbo on the NX 350. The new eight-speed transmission supports the luxury crossover’s 275 horsepower and 317 lb. ft. of torque. Combined, the NX is propelled a 0-60 time of 6.6 seconds, over a half-second quicker than the earlier model, with an EPA-estimated 25 MPG combined. 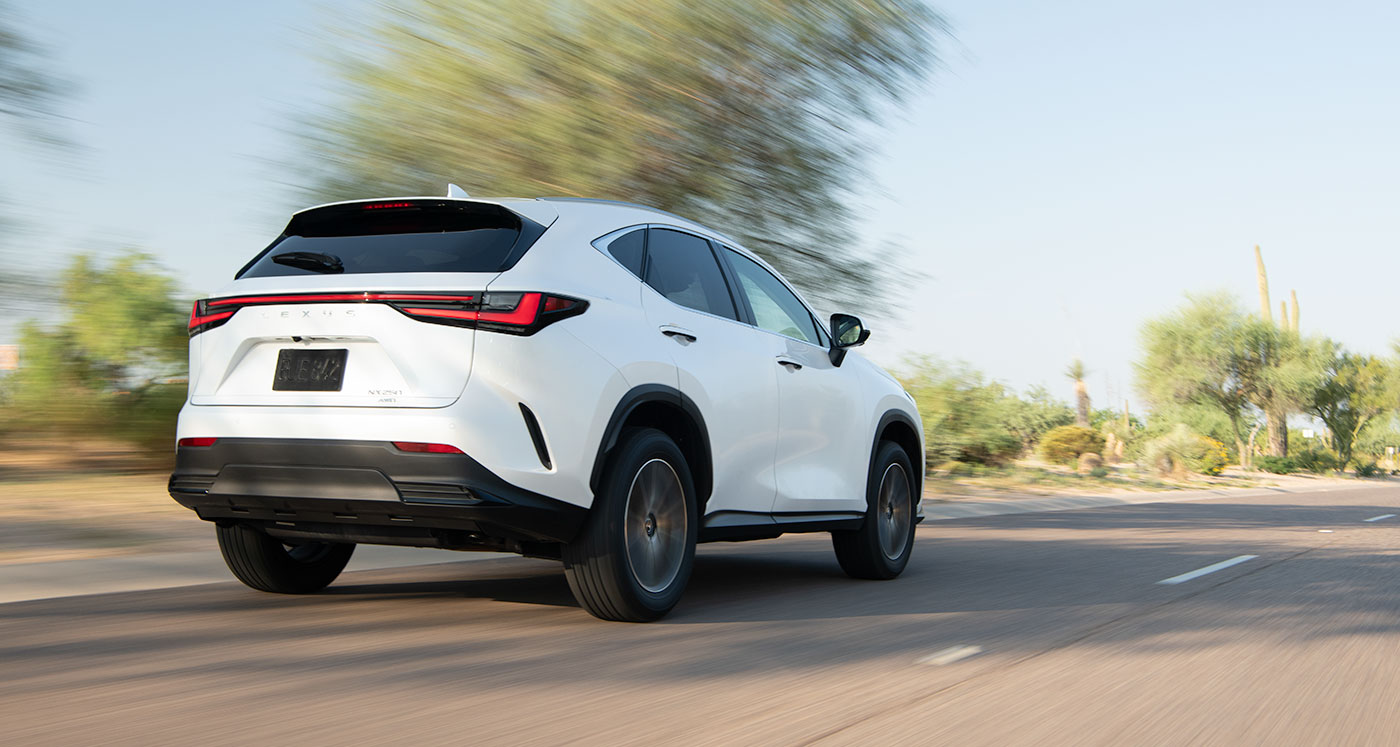 Additionally, the first-ever NX 250 features a naturally aspirated, 2.5-liter 4-cylinder engine with start/stop functionality mated with an eight-speed transmission. This setup, available in both FWD and AWD options, has an EPA-estimated 28 combined MPG. The powerplant produces 203 horsepower and 184 lb. ft. of torque., resulting in 0-60 times of 8.2 seconds (FWD) and 8.6 seconds (AWD), while having an EPA-estimated 28 combined miles per gallon.

The all-new Lexus NX 350h brings power and fuel economy improvements to the mainstay of the alt-fuel family. The Lexus Hybrid Drive system pairs the D4-S fuel injection 2.5-liter, 4-cylinder gasoline engine with two high-torque electric drive motor-generators for strong acceleration and passing performance. Instead of transfer gears and a driveshaft to the rear wheels, the AWD system employs a second, independent electric motor to drive the rear wheels when it detects it is needed to help support traction. 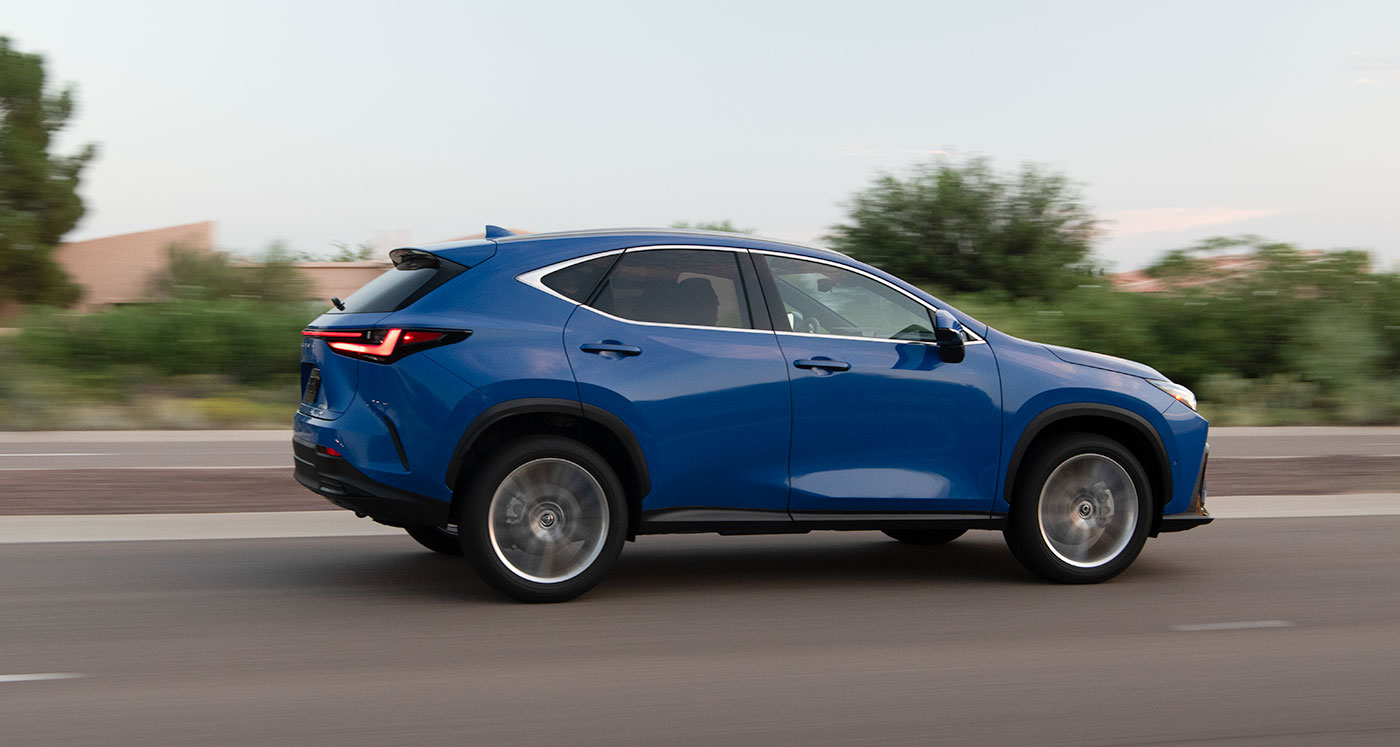 Enhanced Safety with All Passengers in Mind: Lexus Safety System+ 3.0

When exiting the luxury crossover, the all-new, standard Digital Latch and Safe Exit Assist can give each occupant protection from vehicles or bicycles approaching from the rear, a common blind spot in high traffic areas. The new, optional Digital Mirror provides a clear view of obstacles behind the vehicle.

Starting with the 2022 model year, F SPORT Handling will be available on the NX 350. The F SPORT Handling model turns up the driving dynamics with a sporty feel that is amplified by the Active Variable Suspension (AVS), and front and rear performance dampers. Exclusive to the F SPORT family, Dark Graphite Aluminum ornamentation, a unique meter, bolstered sport seats, a newly developed steering wheel, and aluminum pedals and scuff plates set it apart. With perforated interior trim in Black and Circuit Red NuLuxe, the sport-inspired materials are integrated on the seats, steering wheel and center console.

Available on both the NX 350 and NX 450h+, the F SPORT Handling with Luxury package adds the 14-inch touchscreen, unique headlamps and Thematic Ambient Illumination to the styling and performance. 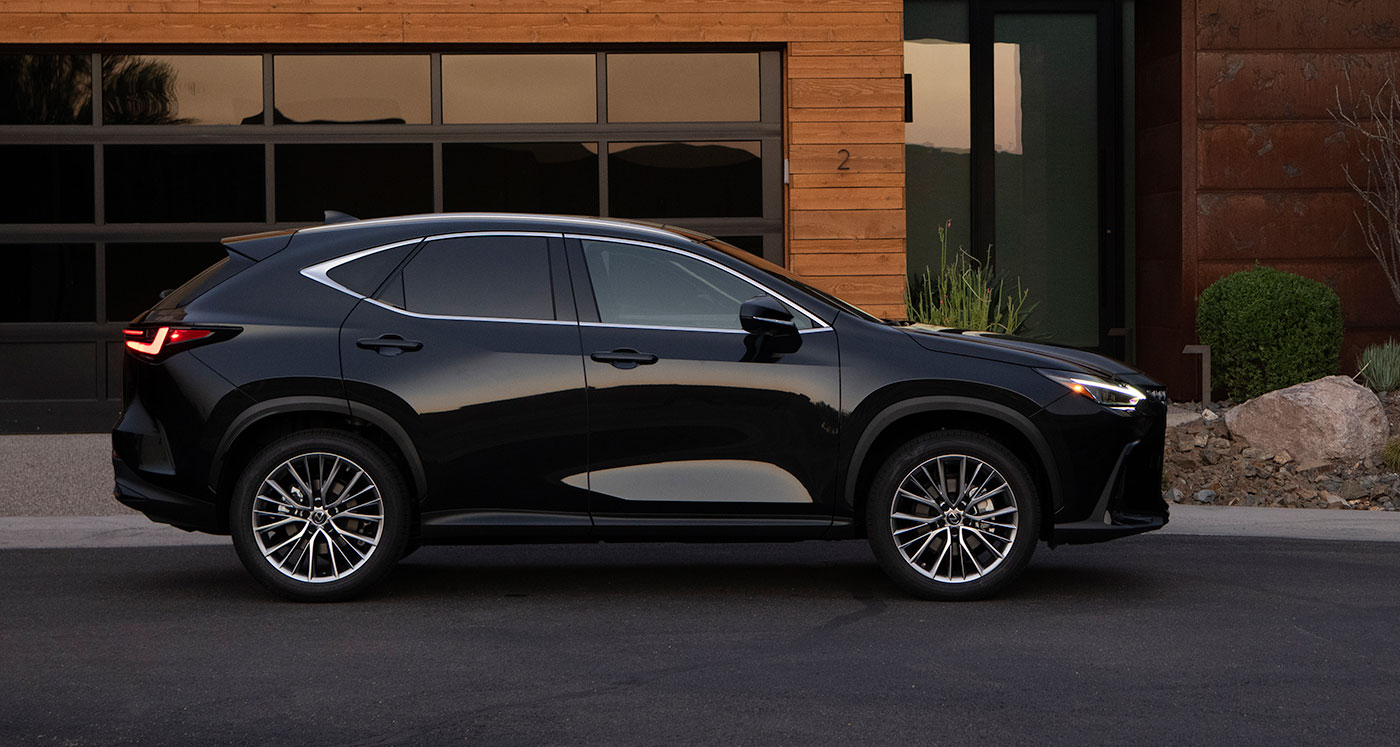 While the new NX is longer, wider and taller than the previous model, Lexus designers took a lightweight and compact approach when re-thinking the NX interior. With nearly 14 percent increase in cargo space with the second-row seats up, the overall gross vehicle weight is reduced by 170 lbs. on NX 350 and more than 210 lbs. for the NX 350h. The use of extended mobility run-flat tires removes the need for a spare tire, reducing weight while creating more space for underdeck storage.

Inside, the 2022 NX provides a whisper-quiet refuge from the world outside with extensive noise dampening materials.

Inside, drivers can create an oasis with nature-inspired Thematic Ambient Illumination, an optional feature that bathes the NX interior in a choice of 14 themes. Each theme has been carefully selected to express a full range of emotions and evoke a feeling of comfort, with themes including Rain Forest, Waterfall and Sunset. 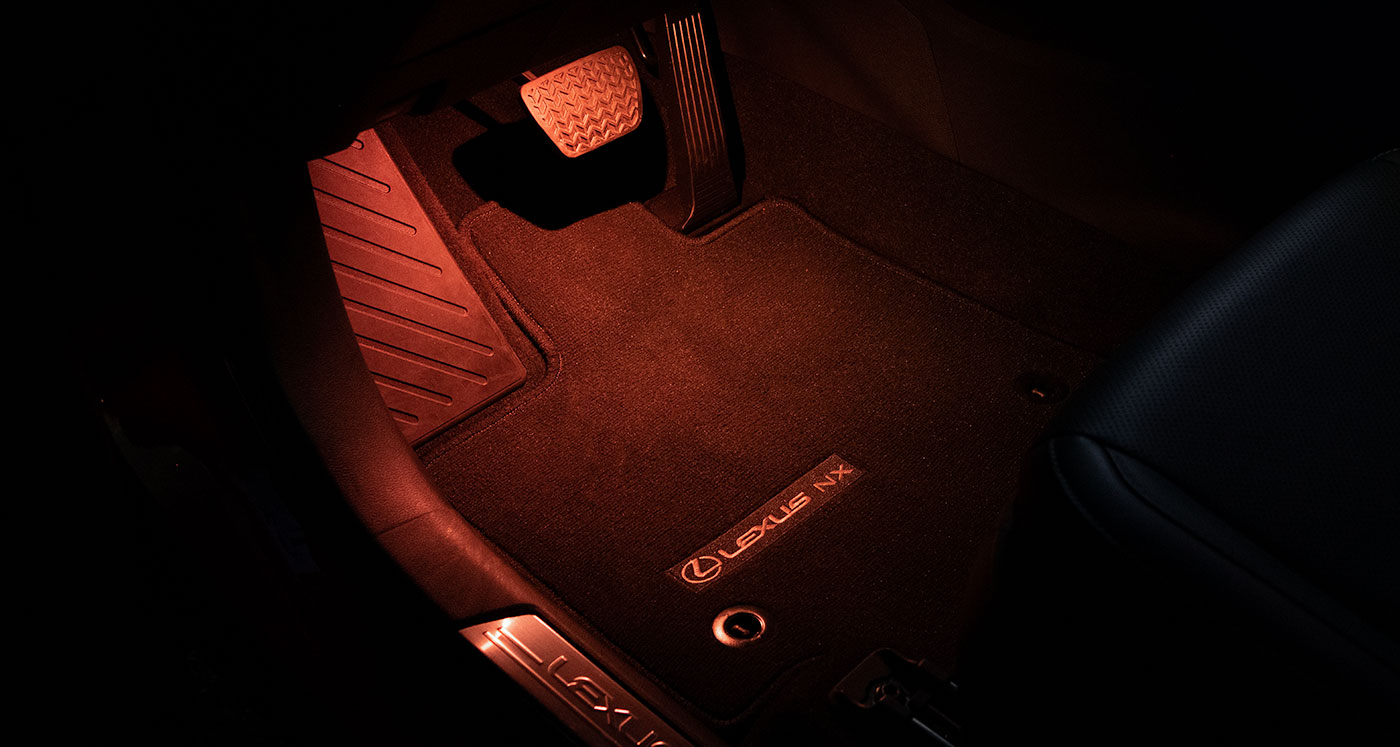 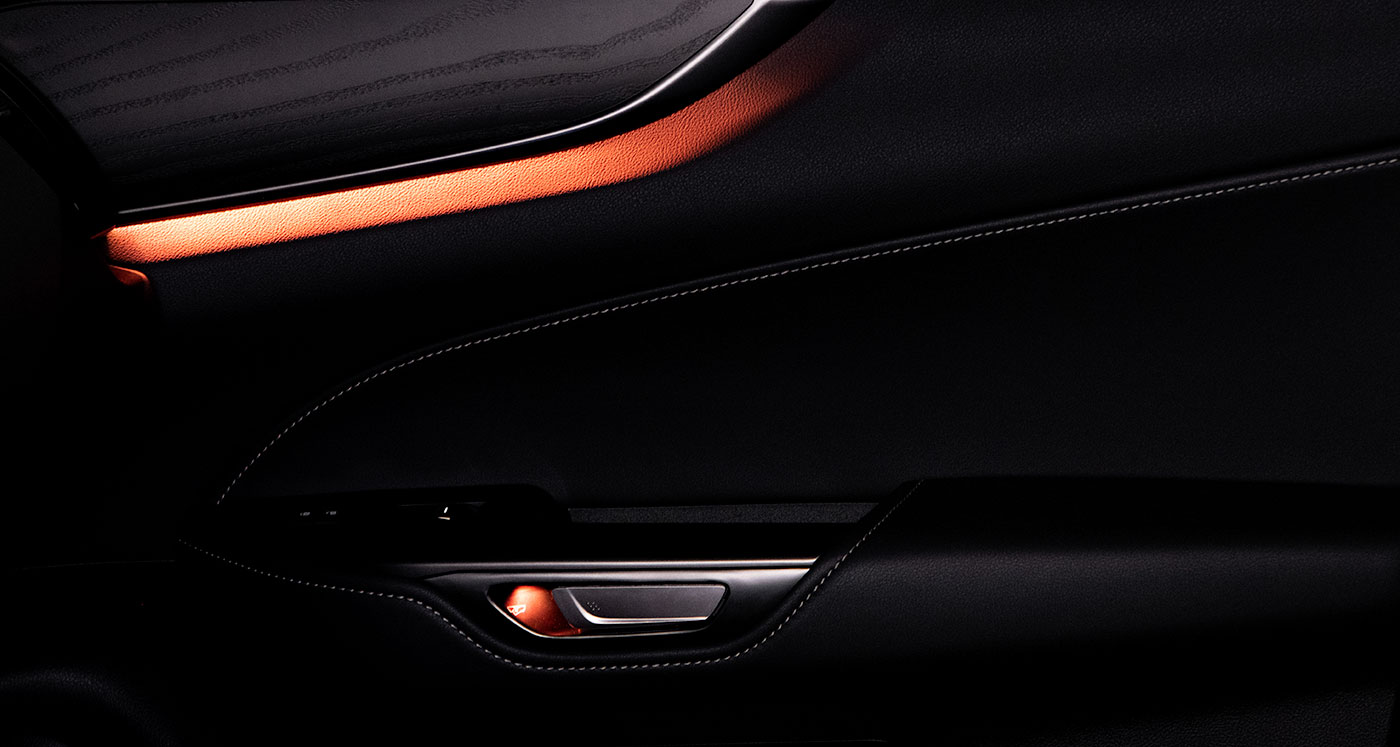 Interior seat and console colors include Black, Black with Rich Cream, Palomino, and Rioja Red NuLuxe trim. All ornamentation has been redesigned. The Stippled Black ornamentation on the entry model exudes a carefully arranged dot pattern with varying density to create a sense of front-rear movement. 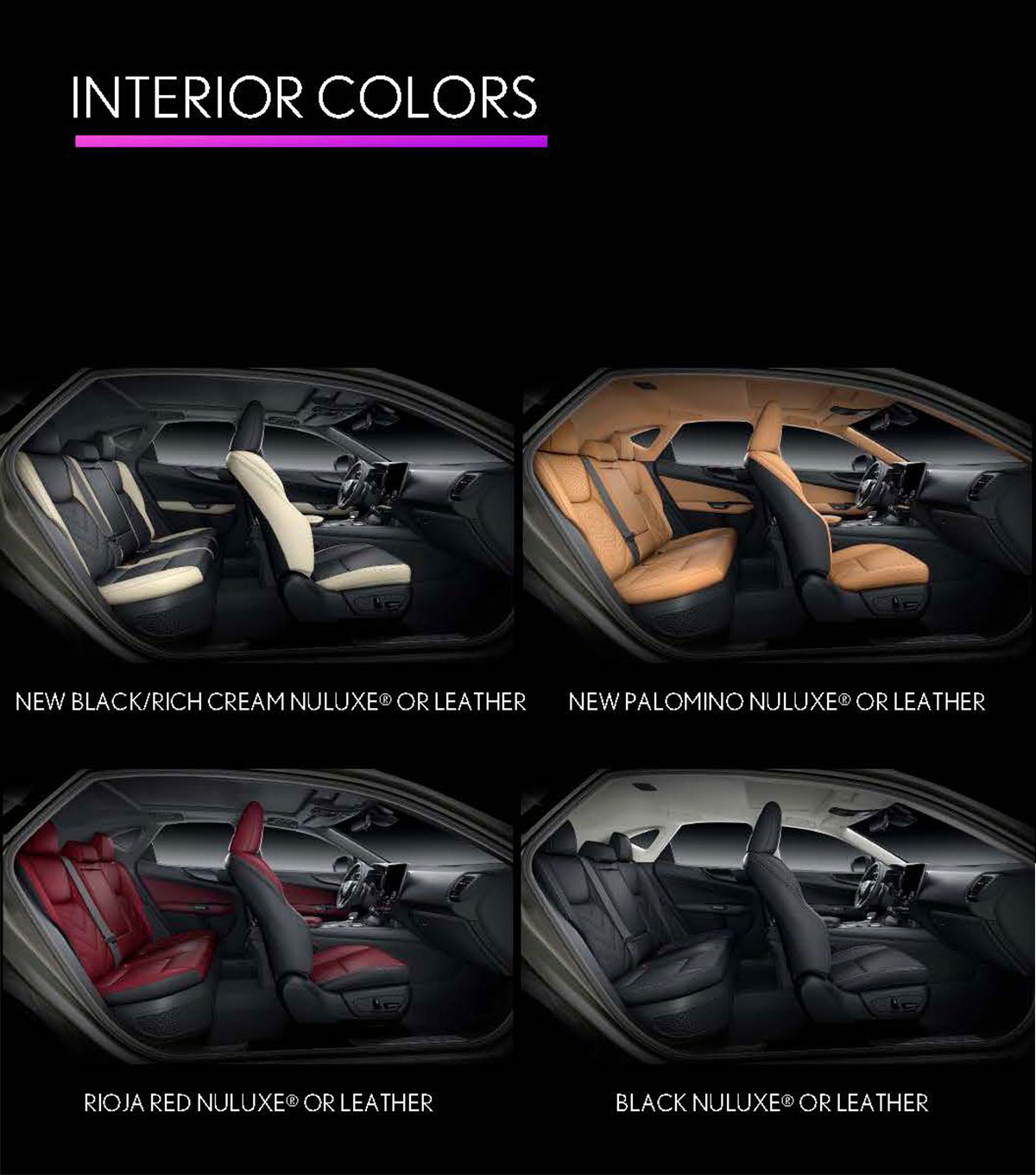 Black Open Pore wood trim adds an opulent touch to the Luxury model. Newly developed Black Prism ornamentation, an advanced looking Piano Black texture, features a three-dimensional fractal that is gradually carved more densely toward the rear so that it changes its expression with transitions of sunlight, creating a high-tech feel on the Premium model.

In a first for the NX, the optional panoramic moonroof gives both the front and rear passengers the ability to see the sky with just the push of a button. Its smooth gliding opening and closing motion supplies easy stargazing or added airflow on a sunny day.

All prices listed are exclusive of $1,075 delivery, processing and handling fee.

The all-new 2022 NX lineup is expected in showrooms as early as December 2021 with production beginning at Toyota Motor Manufacturing Canada in early 2022.

Sorry for your near miss with COVID. Stay safe!
Oh wow, so compared to the pre-order guide, the NX350 goes 0-60 in 6.6 seconds, compared to 6.8 seconds and the combined MPG is 25 compared to 22. I know those are small improvements, but it definitely makes the NX350 quite a bit more attractive (to me, at least).

RobbinN said
Big news! So excited to see it! I looking maybe some Lexus for my self. Does anyone hear about electric Lexus? Just curious.
Click to expand...

Your question about an electric Lexus will be answered in 4-6 months.
Driving the NX 450h+