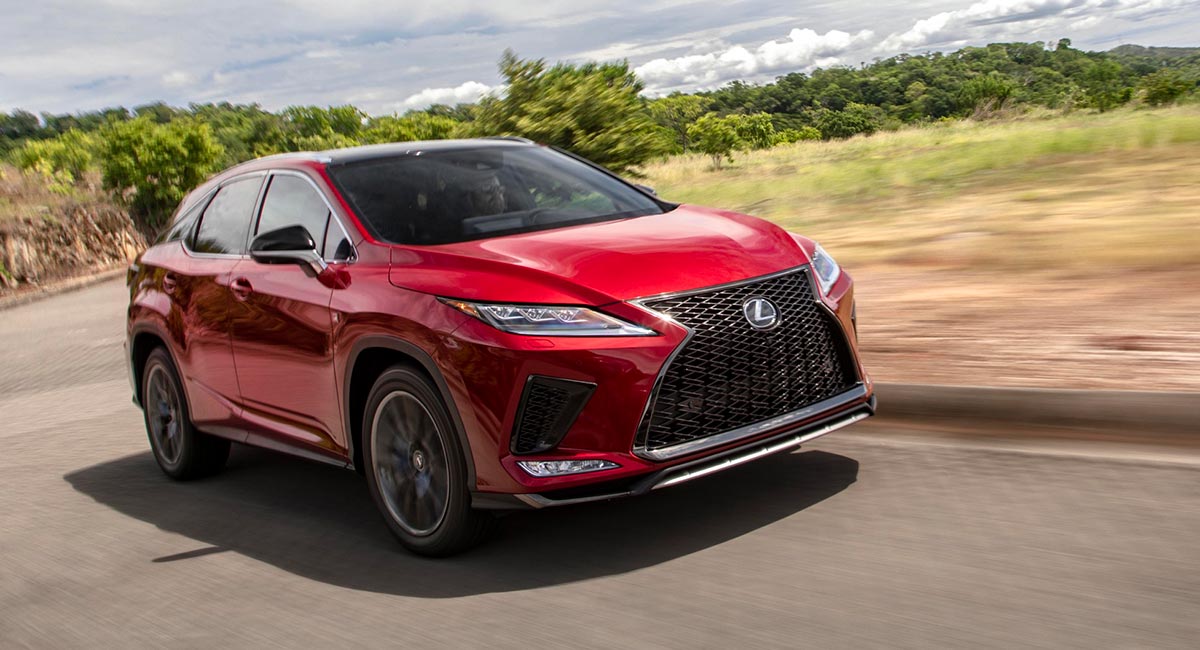 Reviews for the updated 2020 Lexus RX crossover have been posted on automotive outlets online, here are a few choice cuts for your perusal.

Dan Frio from Edmunds likes the handling improvements, but admits the differences are minor:

Thanks to a stiffer body structure and revised suspension settings, the RX’s handling has a little more bite and immediacy changing direction when setting up for quick turns. It’s a subtle change aided by the RX’s new torque-vectoring system, which brakes the inside wheel during cornering to keep the RX on its line.

Fundamentally, the RX’s dynamic character isn’t altered. The RX hasn’t morphed into an Audi Q5 or even an Acura RDX. And that’s OK. Knife-edge handling has never been the RX’s bag, and we think it’s far more valuable for its smooth and absorbent ride. 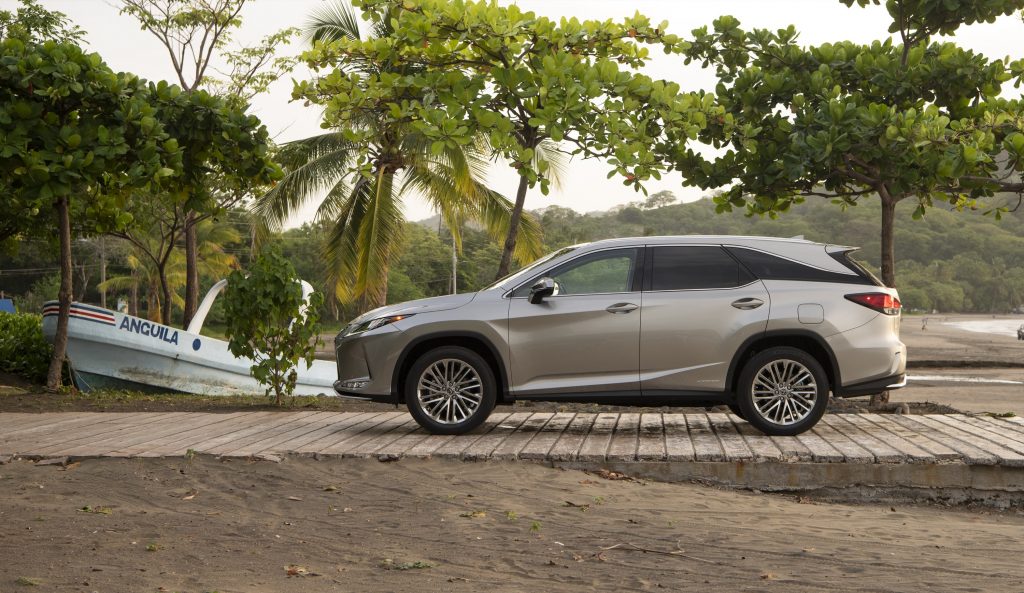 Aaron Gold from Automobile Magazine struggled to tell the difference between the 2019 RX and the updated 2020 model, but didn’t really mind:

Whether or not we’d recommend the RX is beside the point; we expect it to keep plowing its way through the sales charts, at least until gas prices spike and the NX and UX start to eclipse it (as they are primed to do in markets outside of North America). The RX is handsome and competent, and thanks to the freshened infotainment systems, it’s now much easier to use. If we were in Lexus’s position, we wouldn’t have changed more, either. 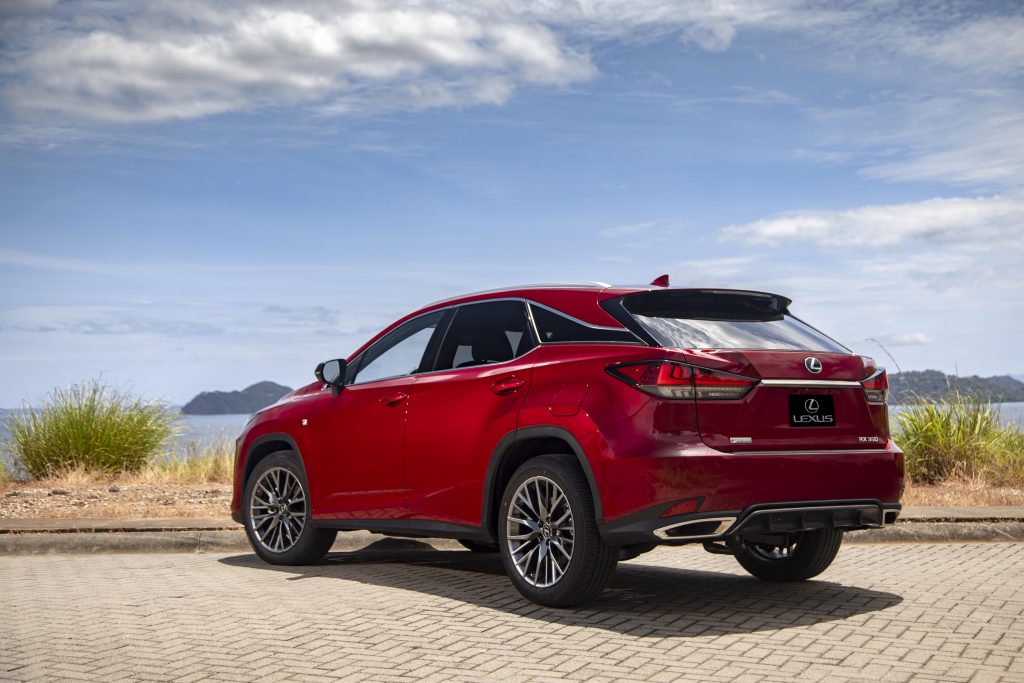 Matthew Askari from Robb Report was effervescent in his praise of the RX’s quiet cabin:

And while the RX handled itself admirably on beautifully winding roads near the Peninsula Papagayo, where this crossover will really earn its keep is in big-city traffic. Perhaps nothing—shy of a Rolls-Royce, Bentley or S-Class—makes for such a pleasant environment as the cocoon the RX provides when stuck in a stop-and-go commute. Everywhere you touch is cushy, padded leather and, with superior insulation, you feel removed and in your own decadent bubble. 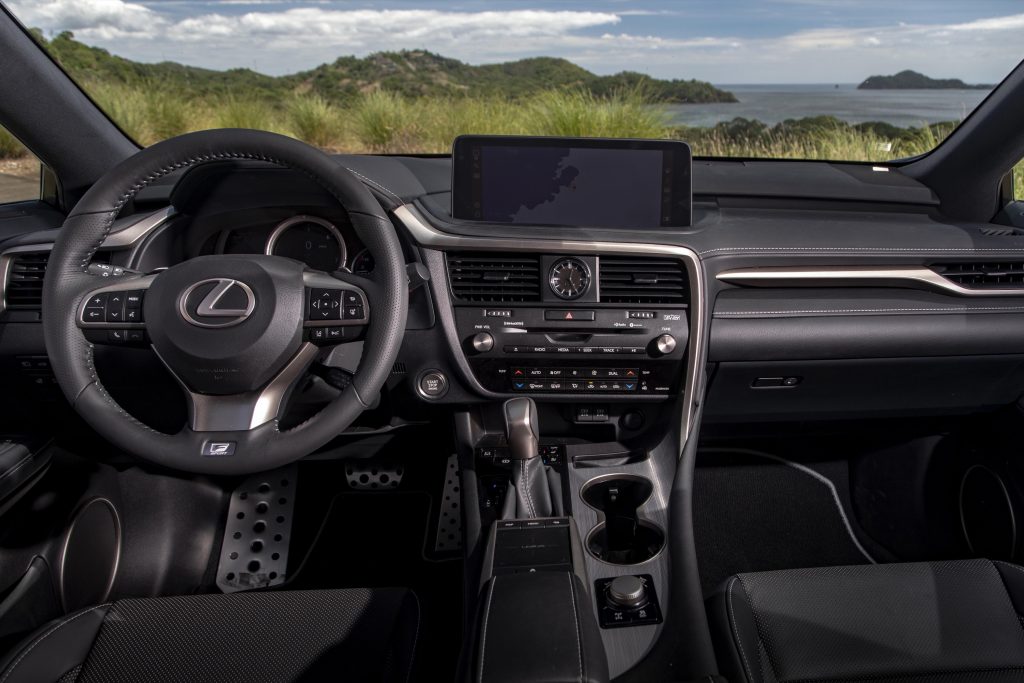 Antuan Goodwin from CNET confirms the findings from the other reviews:

On the road, the changes the driving dynamics are subtle enough that I had a hard time noticing any improvement with a back-to-back ride in the 2019 model. Turn-in feels a hair sharper and more responsive, but overall this still feels like the same RX as before. New “active corner braking” stability control should aid at near the limit handling, but there wasn’t much of that during my fairly relaxed day of driving.

However, I did notice a much larger reduction in cabin noise at speed. There’s a lot less road and wind noise and the thump over bumps is also less pronounced, which makes the SUV a much more relaxing commuting cocoon. 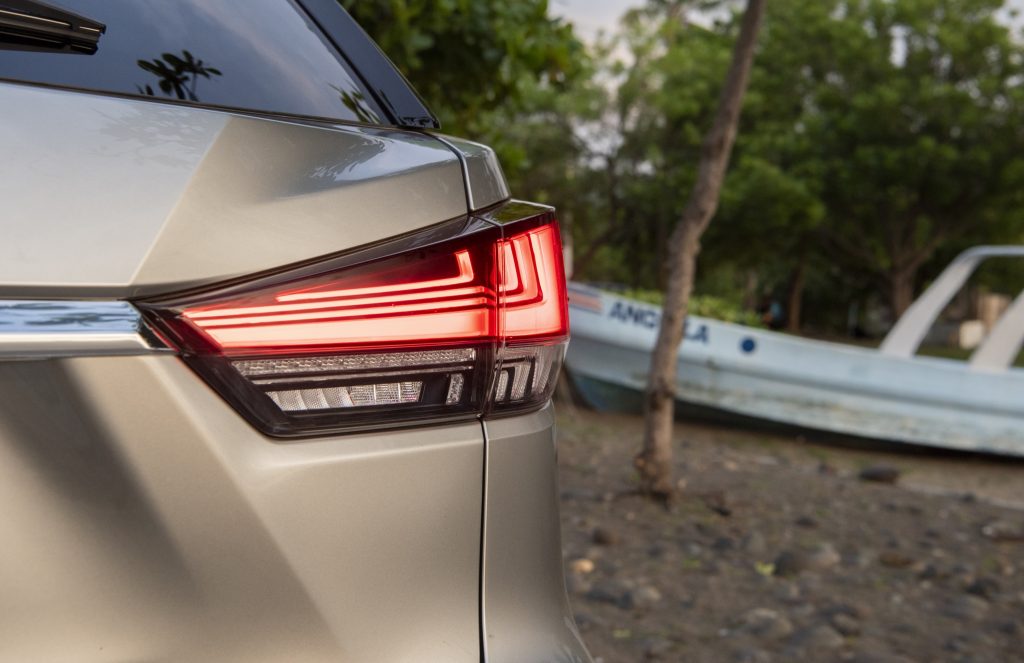 Miguel Cortina from Motor Trend scores a scoop or two with his review:

The Lexus RX won our very first SUV of the Year award back in 1999, and it’s a pioneer in the crossover segment, becoming the first unibody SUV that delivered a “carlike” ride with the seating position and interior space of an SUV. Since then, it has thrived in the segment, becoming Lexus’ most popular model by far, surpassing all of the brand’s sedan sales combined. With its updated styling, better technology, advanced safety, and Pura Vida attitude, the 2020 Lexus RX will continue to be the brand’s sales leader when it arrives at dealers at the end of August. This much-needed update will bring a breeze of fresh air to the crossover. A full redesign is expected in the next two to three years.

Loving all the updates. I used to hate that space in the dashboard with the screen. And now it just looks pretty and clean. It kind reminding me of BMW somehow. But, in a more elegant way. Maybe it's time Lexus brings the RX F to compete against the X5M & GLE63s

I can't put my finger on it, but the exterior looks more like a minivan to me than it did before. It actually looks sort of like the Honda Odyssey in some way. Perhaps the smaller headlights, more sloping front end, swept back roofline, FWD proportions and massive overhangs?

Overall, these updates are nice and help to clean up the design. Head on, the new front end looks more mature and appealing, and I like the new grill insert design. Between this and the UX, it certainly seems to be the grill design for Lexus SUVs. I guess we'll see on the 2020 GX soon?

Gecko said:
I can't put my finger on it, but the exterior looks more like a minivan to me than it did before. It actually looks sort of like the Honda Odyssey in some way. Perhaps the sloping front end, swept back roofline, FWD proportions and massive overhangs?

Overall, these updates are nice and help to clean up the design.

I'm glad I am not the only one to see minivan phantoms from certain angles of the RXL.

Updates look pretty good. Loving the mesh grilles for the non-FSport models that Lexus is doing now. I'm also glad they didn't slap a continuous taillight on it even though there was an article a while ago where Lexus said they were going to start following that trend.

But yes, like everyone else, I also see more minivan vibes in the RXL...
H

I really wish they refreshed the instrument cluster and steering wheel. It’s a shame that in 2020, we are still using Toyota’s cruise control stalk.
Last edited: May 30, 2019

I know it's just a facelift, but sorry to say that this car won't hold a candle Infront of the current Highlander, let alone the newly one which is superior mechanically and design wise
L

From what I can tell hood slope is exact same as on previous design but notion of bigger slope on the front end comes from the bottom spindle part which doesn't protrude at 90 degrees anymore, it's actually missing giant flat piece of surface on the side which helped the front not to look droopy (even LF-1 has that piece). It is now replaced by fake big vent. Second element that adds notion of a slope is removal of flat surface underneath headlights, that snow piling part. Very similar to what they did to RC refresh where headlights follow the body surface without any recess that's why new RC also looks more droopy that the original.

Touchscreen option is welcome addition but it's an instance where you have to sit and try, I can tell it won't be comfortable to reach but I don't think intention was to prioritize hand touch over touchpad. Glad they have touchpad this time instead of the analog stick. Only probable drawback is that screen is not further down the dash but form what I can tell not by much. Unfortunately that surface on top of the center stack that flows into instrument cluster hood is aesthetically ruined now because they put on a cap on top of it to close the hole.
M 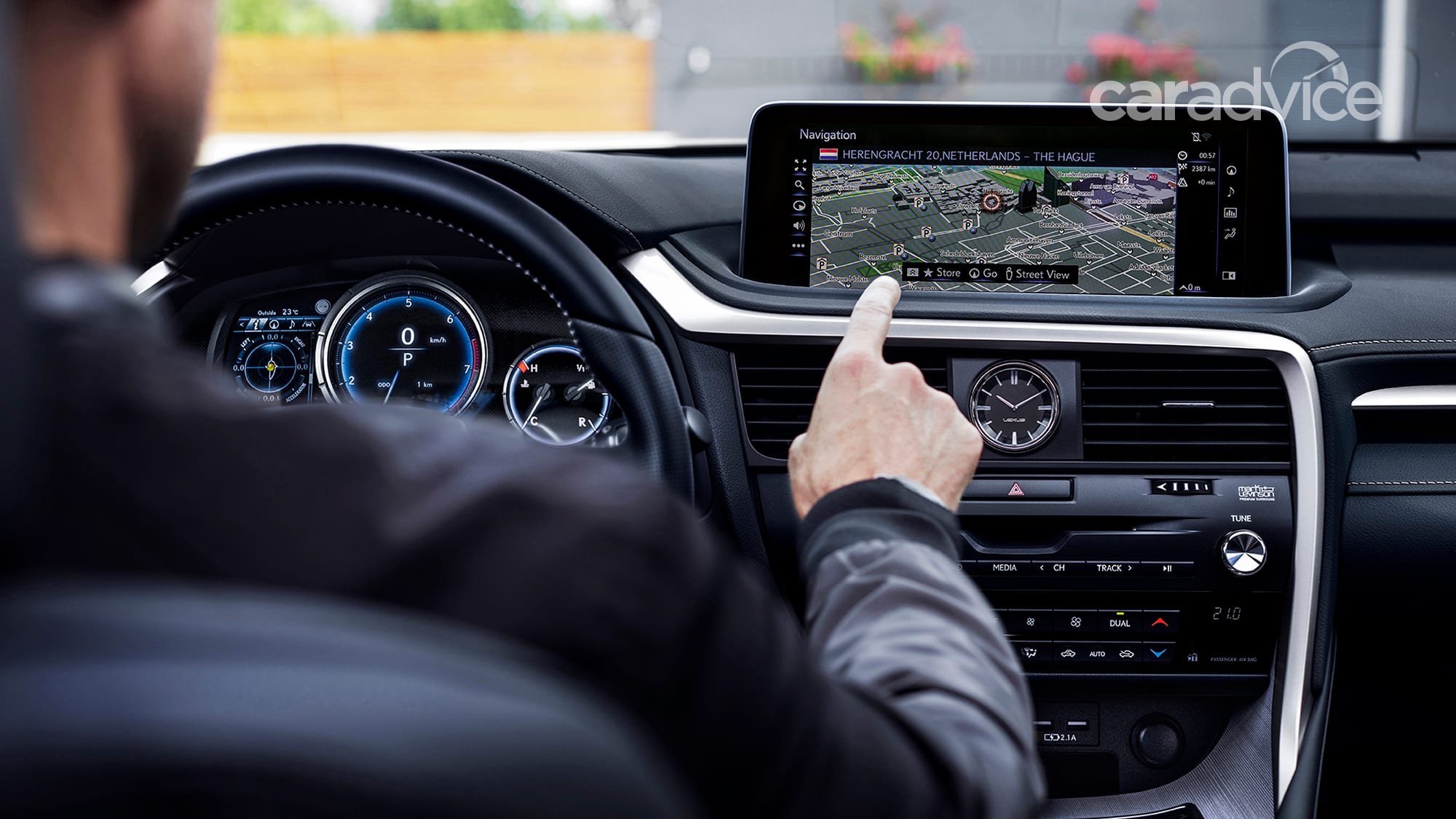 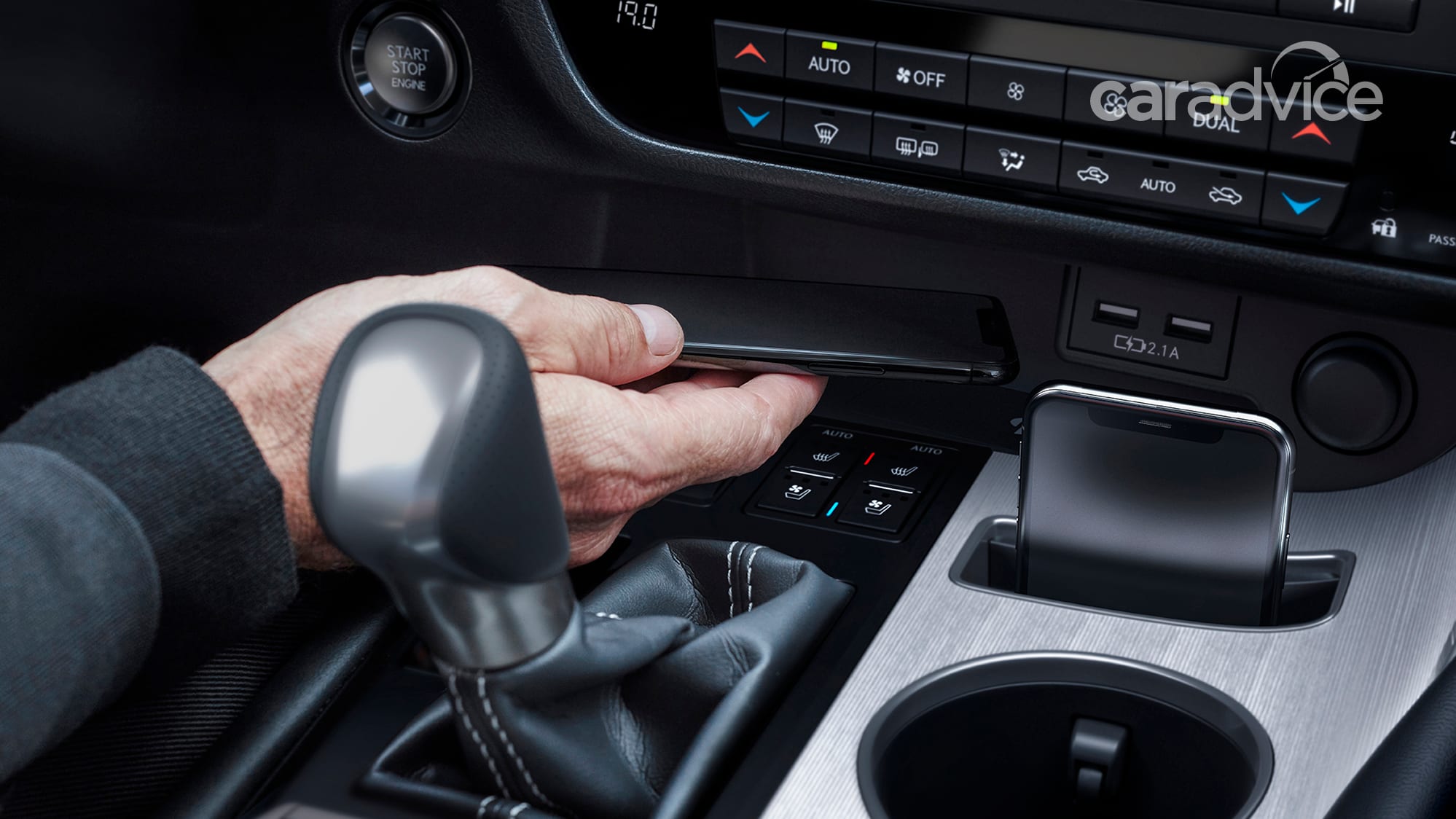 Horus468 said:
I really wish they refreshed the instrument cluster and steering wheel. It’s a shame that in 2020, we are still using Toyota’s cruise control stalk.
Click to expand...

Removing stalk is probably one of the worst ergonomic decisions they ever made.

Old stalk was very intuitive and easy to use, easier than buttons on steering wheel.

Plus new Toyotas get buttons on steering wheel too.
S

Update looks good overall, infotainment was a sore point with reviewers for a long time and now it looks that they covered literally every angle possible with touch, pad, huge screen, android, apple, Alexa... They now have everything.
S

Certainly seems like one of Lexus' more successful and thorough refreshes. The front end and taillight changes look better than the outgoing ones. I like that the suspension tweaks promise to improve the driving feel and reduce body roll. Fingerprints notwithstanding, I like the touchscreen functionality.

I need more clarity on the "2 new options for F Sport", though. Is AVS (Adaptive Variable Suspension) the other difference between the two? Or is it a "base" F Sport "look" with front & rear performance dampers, Drive Mode Select with Sport+ & Customer Drive Modes and then an upgraded F Sport package that adds AVS, cold air intake, active sound control, Electric Power Steering (EPS), and a heated steering wheel? And why mention the EPS as an upgrade? All RXs come with electric power steering. Did they mean to say firmer, retuned EPS?

And why is kick opening for the rear lift gate an option? it should definitely be standard on a luxury brand vehicle.
S

Infotainment in Europe for TMC is handled by different company and usually has different feature set.

And a bit more (and yet more images) on the Lexus Global Newsroom:
https://global.toyota/en/newsroom/lexus/28309969.html

mediumhot said:
Touchscreen option is welcome addition but it's an instance where you have to sit and try, I can tell it won't be comfortable to reach but I don't think intention was to prioritize hand touch over touchpad. Glad they have touchpad this time instead of the analog stick. Only probable drawback is that screen is not further down the dash but form what I can tell not by much. Unfortunately that surface on top of the center stack that flows into instrument cluster hood is aesthetically ruined now because they put on a cap on top of it to close the hole.
Click to expand...

My thoughts exactly. The added touchscreen function is OK and the screen moved forward, but just try to imagine in a current RX: there is no way that the screen can be close enough to get comfortable access to the touch function without a complete dash redesign. Also the extra surface material to close the gap ruins the premiumness. Good additions though are the smartphone holder and added usb ports (which now makes 6 in total!).

No, this new screen remains a fixed one, just like the old version.

They’re clearly addressing what’s wrong or at least people complains about. Even if they lock the touch input when driving it’s a clear upgrade.

In my opinion the general redesign is a success as the model doesn't need much more to face competition.
It keeps its original design (with all its pro's and con's) with a lot of personality. The engineers further improved suspension for comfort and multimedia is now finally up-to-date. They also listened to customers' input on the available interior colours: most combinations now have black lower interior panels. The Noble Brown lower interior panels are kept to a minimum (only combined with one lighter seat colour). The issue of the brown panels having a colour difference between the different surfaces is somehow restricted now.

The only 3 items that are a bit of a disappointment to me, are:
- the lack of a fully digital meter combo with personalization options like e.g. in recent Audi models: I suppose that this is kept for the new model in a few years
- PHEV version: I know that this is coming, but it should have been here now already
- improvement on material use (get rid of hard plastics) in the lower console and door panels: I am afraid that this is not going to happen any time soon, unfortunately...

And... another small item that I would have changed: to make a bit more family lookalike with the new UX the rear light units could have been linked with a red LED illuminated line instead of the current chrome line. That would have been a really cool feature, I think.
Last edited: May 30, 2019
You must log in or register to reply here.
Share:
Facebook Twitter Reddit Email Share Link
Driving the NX 450h+