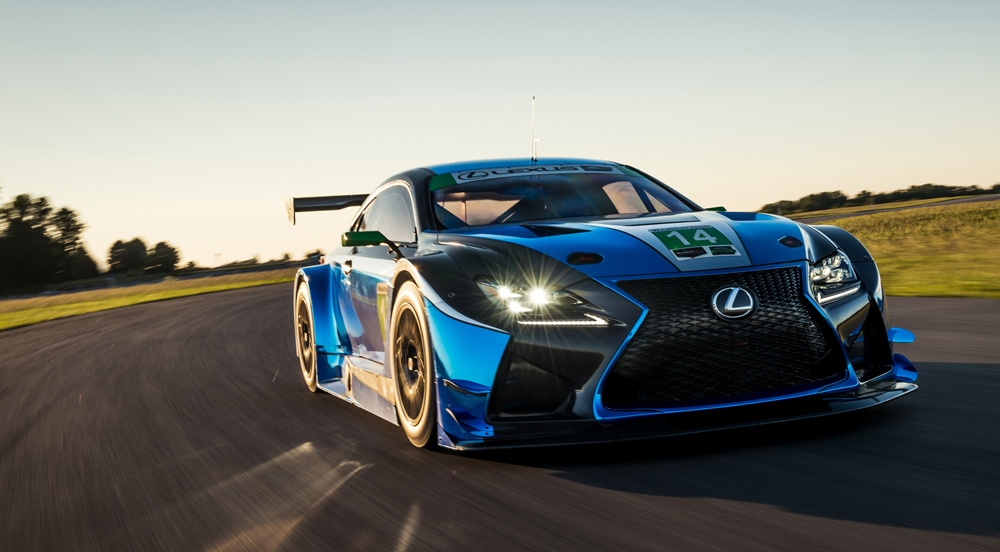 3GT Racing has just finished their first run of the 2017 Lexus RC F GT3 race car at Daytona in Florida, with drivers Scott Pruett and Sage Karam joined by the newly announced second team of Robert Alon and Jack Hawksworth for test laps.

Sportscar365 was at the track for an interview with Lexus Motorsports Manager Mark Egger:

Lexus’ involvement in IMSA was announced nearly a year ago, at Daytona. Are you excited to be making this a reality, in the public North American debut of the RC F GT3 this week?

“Yes, we’re excited. The new car has been fully developed and it’s going through the homologation process right now.

“When we looked at the 2015 car compared to where we’re going this year, we decided to hold off on bringing the ’15 car out and make the best business decision. We saw the development of this car going so well that we decided to put all of our eggs in the ’17 basket and start with a full season rather than mid-season.”

What are the goals and expectations for the season?

“To be able to finish each race would be the priority because then we can take the learnings from one track and take it to the next because we enter the tracks for the first time.

“But then also taking what we learn and applying it to our road cars to make them safer and more reliable, things like that.”

Some quotes from the four drivers were also circulated in a press release:

What has it been like to help 3GT Racing and Lexus launch a new sports car program?

Scott Pruett: “It’s exciting. I mean, this has been a long time coming – about a year. I’m so excited to be back in Daytona. I love this place – everything about it – and with Lexus and everything they’re doing, this is the start of everything. It’s a brand new program for them. Everything we have to learn about the car is new.

From my standpoint, moving from a prototype to a GT is significantly different, so there’s so much newness to it, but there’s so much excitement. I’ve been in this business a long time and when you can work with a manufacturer like Lexus there’s that freshness and that excitement to it all. Instead of just doing it all again, this is all for the first time.”

What is your role at a test like this with a new program?

Sage Karam: “Obviously, it’s kind of like a best of two worlds scenario because I’m out there learning the car – this is a new car for me, so the more laps I can do on it, the better it is for me – but then also the more laps I record, it’s better for the team as well.

We learn more about the car, we learn more about reliability and that’s the big thing in sports car racing – especially endurance racing – is reliability, so tests like these we want to try and put as many miles on the car as we possibly can and come across those issues now rather than race weekend.”

How did the test go and what is it like moving to sports car racing?

Jack Hawksworth: “It’s been a good couple of days. I think we’ve done a lot of laps and the car seems to be very reliable. We’re just kind of running through the first things with developing a new car and so far, so good. Everybody has had some good time in the car and, yeah, enjoying it.

This is my first season in GT, but I have some experience in this kind of racing – longer duration, sharing a car, multiple driver kind of thing – but it’s my first-time racing a car like this. I’m enjoying it a lot. I like the new challenge. I’ve learned a lot and I feel like I’m already acclimatizing very well, so it’s been a pleasure to be involved in it and obviously to be with such a fantastic company like Lexus it’s an honor, so I’m hoping we can go out there next year and do those guys proud.”

How did the test go?

Robert Alon: “Everything was good. We’re just polishing up our program, getting ready for the season and just slowly working our way towards our goals. This is very exciting for me. I’ve always been interested in the engineering side of things and watching the program develop from the car to the team to everything is just a really cool learning experience. Car felt great – very stable, very consistent.”

3GT Racing and their two RC F GT3 cars will have their next MSA-sanctioned test sessions on December 13-14, once again at Daytona.