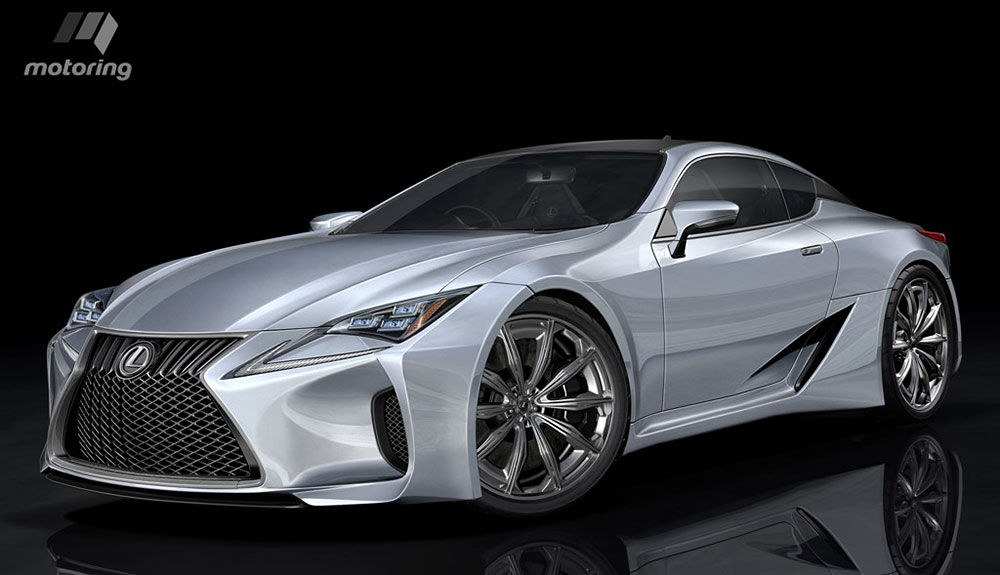 According to Peter Lyon of Motoring Australia, Lexus will debut the LC coupe in Detroit with two powertrains — the LC 500 and the hybrid LC 500h:

[The LC 500 will use] The same 351kW/530Nm 5.0-litre V8 propelling the RC F and GS F will most likely be married to a world-first 10-speed automatic transmission supplied by Aisin, which will aid performance efficiency.

The LC 500h on the other hand, will employ an all-new 3.5-litre V6 ‘multi-hybrid’ for rear-drive models, that will also be offered on the next-generation LS.

Based on the rumor, the LC 500h would have a revised version of the GS 450h’s hybrid powertrain using a redesigned engine and hybrid system. Lyons reports the LC 500h could have a 3.5 V6 engine with 308hp and an electric motor with 217hp, producing a combined 470 horsepower.

There’s also a passing mention of the LC F:

Best looking rendering yet and the #s sound very believable.Lexus has been researching this turbo for a while and they've constantly referenced wanting to "find more creative ways to boost power than conventional turbo charging." I believe electric turbo charging might be their answer of just doing things a little different.
I actually love this render! WOW! The grille is a little inaccurate because of the spy shots, but still I hope it looks like this. Also, I really hope they debut it! Im so excited for this model. Lexus needs this model, let's be real.
I like the sound of the GSF V8 in just the regular model...I like that a lot!
100% yes!! Can't wait for this! These types of cars are what make being a fan and tech so awesome!
The term "multi-hybrid" has me intrigued.
Can't wait. Any guesses at pricing? 100k USD starting?
This is one amazing render :DThe details just sounds so so real!!CAN'T wait for this!!
If this is true, that means the LC F will debut even later. Ugh.
That render is breathtaking!
The rendering looks really nice.  If the rumour that LC 500/LC500h coupe get unveiled in the coming Detroit Auto Show, it would be thrilling.
Forgot to say this: An F version 2 years later? Damn the RCF was revealed shortly after the RC. Oh well...either way LC is coming!
Sounds brilliant. If the lcf rumours are ture, then how about the Rcf#gsf use that 4.0 twin turbo?
Just make it #handle. I'm tired of Lexus building cars that look amazing, go like hell in a straight line, and get hung out to dry by BMW in the corners.RC-F and IS-F were made to look silly by Top Gear, unable to maneuver through corners at top speed without losing it.If BMW can produce boring, bland, uninspiring vehicles that sell so well and handle as leaders in their segment, Lexus should make it an engineering priority to finally put something out that will unseat BMW's stranglehold on the sports sedan crown.
I am trying my best to like this, but it's not happening.
Driving the NX 450h+