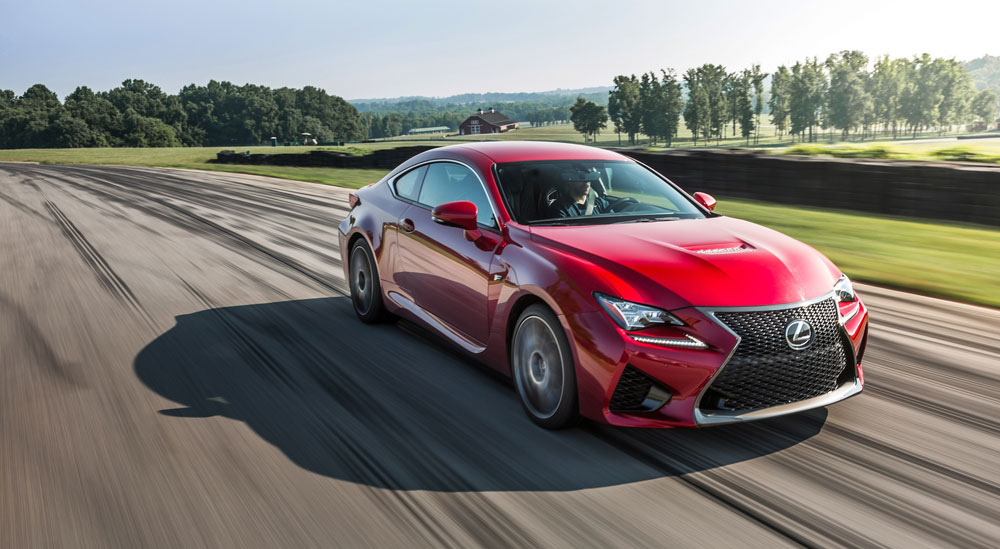 The Lexus RC F competed in the annual Car & Driver Lightning Lap, finishing last in its class and mid-pack in the overall rankings — from the RC F feature:

Almost everywhere on VIR, the Lexus closely trails the Mustang GT, the nearest analogue to a Camaro in this test. Were it 200 pounds lighter like the Ford, the RC F might even have caught the Mustang.

Sure, the RC F would be quicker if you could get it to turn at higher cornering speeds. It pulls 0.93 g in Horse Shoe, a so-so stat that indicates the understeer with which the driver is always grappling. In faster bends the car glues down and stays flat, its speed limited by the power available.

Of note, the RC F’s lap time is .4 seconds behind the 2011 IS F in the historical rankings. This is something that could no doubt be attributed to track/temperature differences year-over-year, but that lack of improvement also explains why the RC F struggled in this year’s comparison.

God I love Lexus, but man the RCF really is a joke. There is no logical reason as to why anyone should buy the RCF over say a Mercedes Benz C63 AMG... Which I love, and although I do however hate BMW, the M4/M3 is a better vehicle also. The only reason really is that Lexus makes a reliable, well-built, comfortable vehicle, but still not enough to make me run out and get one over the competitors. Just my two cents, any other thoughts?
The simple truth is that the RC F doesn't stack up against the competition when performing an overall comparison of vehicles in its price range. Referring to the C63 and M3/4 as stupid toys when compared to the RC F simply doesn't make sense. One also doesn't have to drive a car on a track to appreciate its features. The general industry consensus is that those German vehicles are outstanding. Having driven the new C63, it certainly did impress. Buying an RC F over a better-performing German alternative boils down to brand affinity. Although the C63 outperforms it, I'd buy the RC F instead as I sense a much more complex design philosophy in a Lexus than in any other brand. Let's not however break the competition down to try and build Lexus up. The Germans know what they're doing in this segment and opting for a C63 or M3/4 over an RC F would be the most logical decision for most performance-oriented buyers.
I love the fiery nature (maybe a bit over the top) but we all love Lexus here and want what's best for the company! Exciting times RX is out GSF will be out soon and the new LS concept is out! Keep it up Lexus we're proud of the new changes! It's exciting to look and to drive a Lexus and that means a lot to us hard core fans!
i just wans my IS200t lol