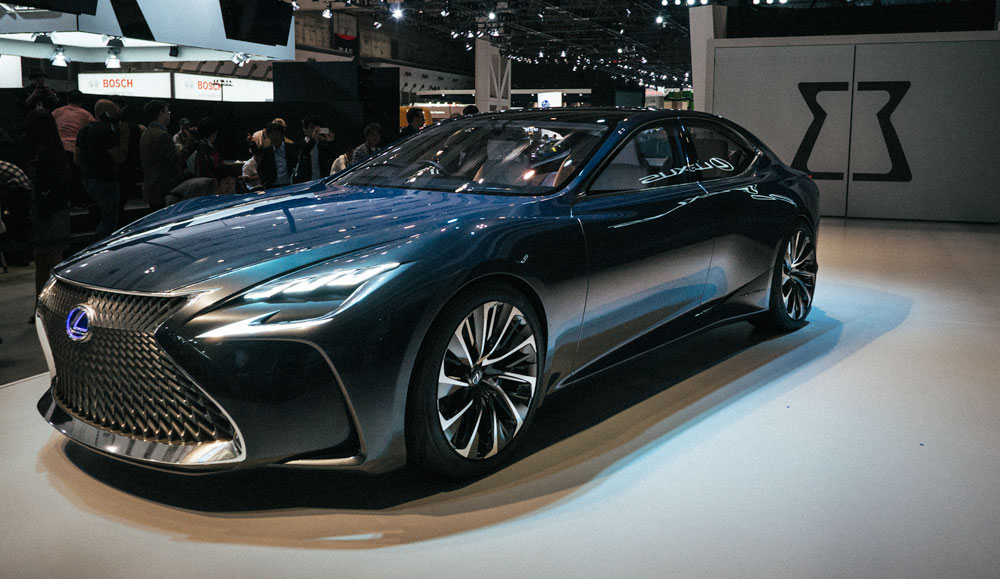 Lexus debuted the LF-FC fuel cell concept earlier this week at the Tokyo Motor Show, and Lexus Enthusiast editor Kevin Watts was there to see it. Here are his thoughts on the brand’s “future vision of progressive luxury”.

Immediately, it’s the size of the Lexus LF-FC that surprised me the most. Significantly larger than the current LS, the concept has a commanding presence and a confidence that has long been missing from the Lexus flagship sedan.

The front end is the absolute essence of modern Lexus design — the massive spindle grille pushing every other element to the very edge, the triple-L headlights embedded in a steep angle: 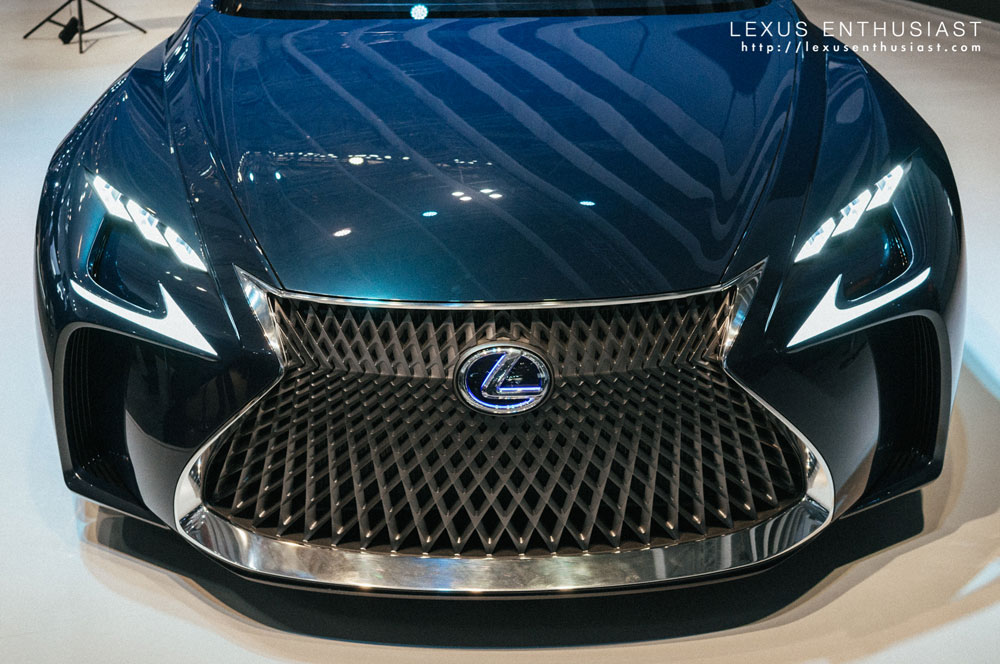 The lines moving out from the spindle grille resolve well throughout the vehicle, something that Lexus has done better and better with each new model.

The side profile is set with bold, confident character lines that pinch in at the rear doors. This is flagship design at its core, with a silhouette that marks a dramatic departure from the current LS line.

The overall rear design is an evolved version of the LF-LC — where the coupe concept had an exaggerated point to the trunk, the LF-FC has smoothed out the angles and looks production-ready as a result: 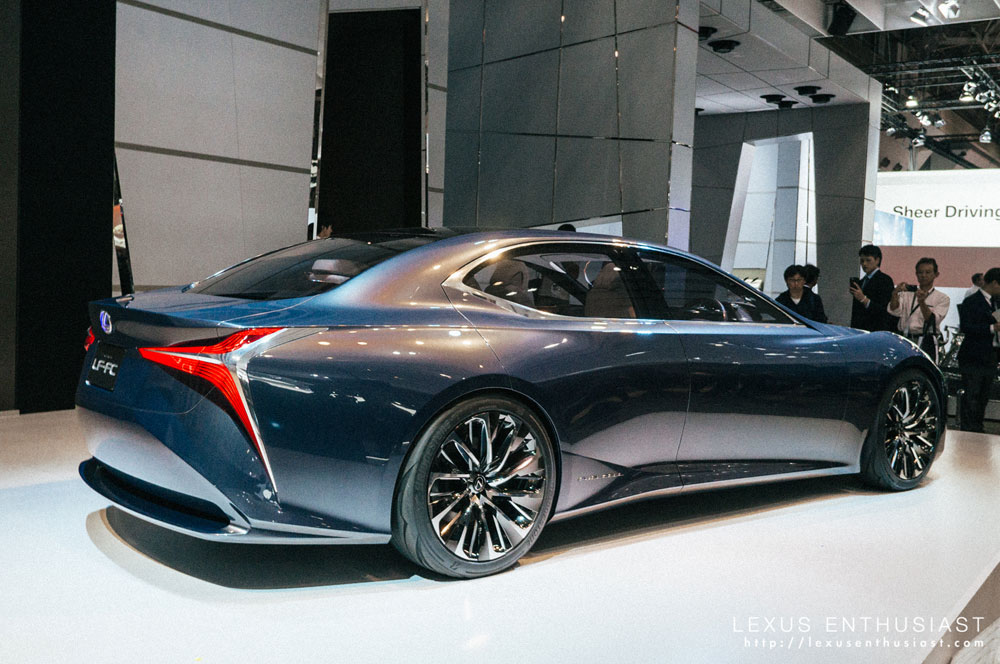 Straight on, the rear is dominated by taillights that start near the trunk logo and expand outward in every direction. The large mesh areas on the outer edges suggest the LFA to some degree, but the LF-FC might have been better served with an updated version of the LF-LC “afterburner” taillight design.

The show car was locked up tight, meaning the official images with their CGI elements are the best way to see the interior:

Being a concept, there are fantastical elements — the floating front seats, the interactive hologram in the center console, the missing side mirrors replaced by cameras, all of these details seem unlikely to make it into a short-term production model.

Even so, there’s a glimmer of the direction Lexus might take with the next-generation LS interior, particularly with the airy open design and the first-class material quality. It’s my hope that the next-generation LS also carries over the minimalist approach of the LF-FC cabin — there doesn’t seem to be a traditional button anywhere. 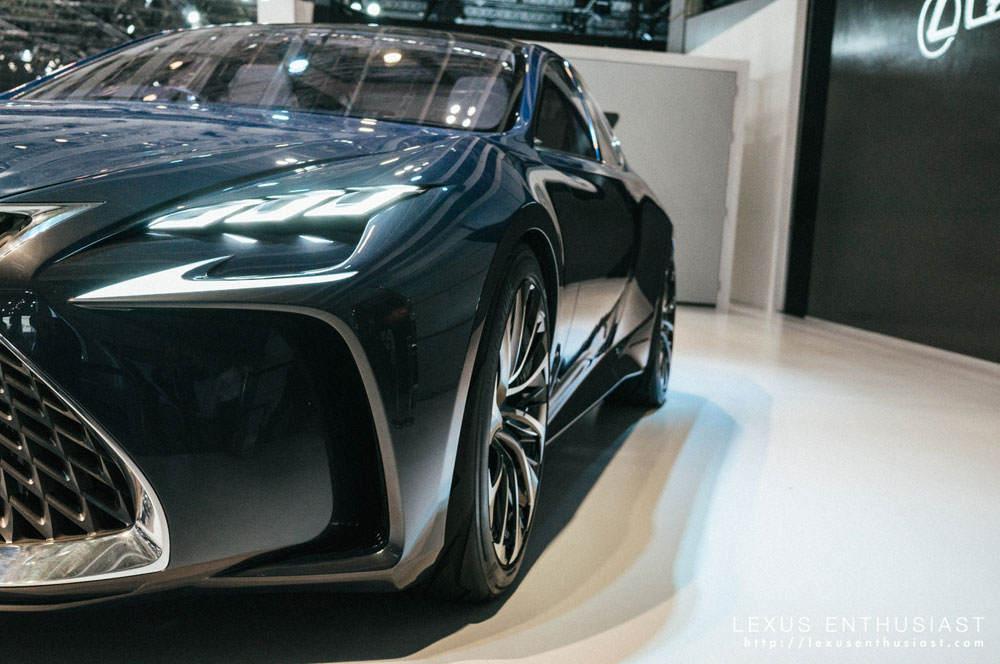 While I have no facts to back this up, my hunch is that the LF-FC previews both the production LS and production LF-LC coupe. This would be a similar strategy used with the LF-CC concept in 2012, which worked well in showcasing design elements used in both the RC and IS.

What does this mean in practical terms? Well, I don’t believe that the LF-FC is an amped-up version of the next-generation LS — I expect there to be substantial changes between this design and the final production model.

In talking with Lexus International executive vice-president Mark Templin after the reveal (full interview to come shortly), he said that the LF-FC and LF-LC represent the future of Lexus. I can’t wait for that future to arrive.

Great write up and photos, Kevin. You really showed the details - and thus personality - of the car that nobody else noticed. Thank you!
It looks way too European, Aston Martin look alike boring but I'm confidence LS will come out looking like a lexus
Nice shots.I'm looking forward to the interview with Mark. Thanks again Krew.
Krew - great pics. although I am sure interior will have plenty of buttons, as it should... when I am driving, i dont want to wave my hand in the air to change radio station or raise temperature. Ergonomics and usability have to be #1 as always with Lexus.
Nice Krew. Great pictures and even better written impressions. I hope this concept makes it on to the North America tour, I'd love to see it with my own eyes.
I do hope the production LS stays as close as possible to this. And that given it's size they give it 4ws.
It would be the BEST if the next generation of LS would take over most of this great looking concept.
According to DigitalTrends.com, after speaking with Lexus of Europe boss Alain Uyttenhoven, the all-new 2017 Lexus LS500 and LS600 will land next year. The Lexus LC500 production model is set to be shown in Detroit, and I highly doubt both cars will be shown at the same show, so I'd expect the LS to be shown in New York in April. According to this information, the 5.0 V8 will make 465 HP, not much different from what it makes in the RCF, but hopefully, they can get more torque out of it. The hybrid will be V8/electric, not V6/electric, and make 535 HP, which makes some sense given they also say the future LSF sedan will be a turbo V8 making an even 600 HP. The hydrogen version comes a year later, and has a range of 239 miles (such an exact number also lends credence to the sources). Also the TX full-size crossover is being rushed to market. Sounds like the reveal may come next year at this time and should hit dealers in early 2017. It is being described as "a second flagship" model. Outside of a lack of torque in the V8, the LS looks like a winner, and 2016 looks like it will be a very big year for the top of the Lexus lineup. http://www.digitaltrends.com/cars/2017-lexus-ls-hybrid-news-rumors-specs/ BD
this looks a little too simple, and soft. I liked the hard edge design of the RX, especially the side profile, it had a lot going at the doors, floating roof. This one on the other hand is too plain, rounder, feminine. This can easily be confused with infiniti. Also the proportion seems off, the front end is too low, and long, making the rear look bulky. still a good effort, 100 times better than the current LS.
I daily drive a current-gen LS460, and I have absolutely no problem with the low-end pickup. So if the new one bumps HP to 465 I'm going to have a hard time finding fault. Also I agree with IS-SV: modern sedans should not be truck-like, that's what CUVs/SUVs are for. One point I haven't seen made: it's been noted that the proportions on the current LS look a bit better on the long-wheelbase 460L model compared to the standard 460. This concept is clearly the xxxL model; it has the L's reclining rear seats and the length is similar to the current 460L. I'm curious if the concept will similarly be hurt by trimming it down to standard wheelbase.