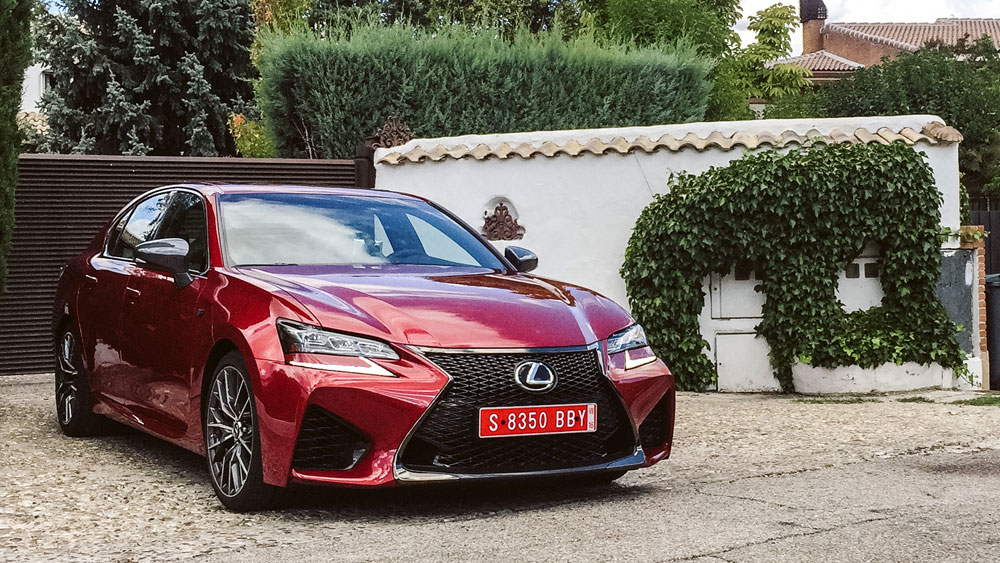 When the fourth-generation GS 350 was introduced at Pebble Beach in the summer of 2011, it marked a turning point for Lexus. This was the first model to wear the spindle grille, the first move toward performance as a core attribute of Lexus models, the first step in a direction that would transform the brand.

Four years later, Lexus has introduced the GS F — a high-powered variant that combines the standard model with all the performance enhancements recently introduced in the RC F coupe.

But is this nothing more than a GS with the RC F engine, or is it something else entirely? Lexus invited me to Madrid, Spain, to test drive the GS F on both street and track to find out for myself.

The days starts off in an Ultra White GS F, cruising the rural roads and highways to the northwest of Madrid. 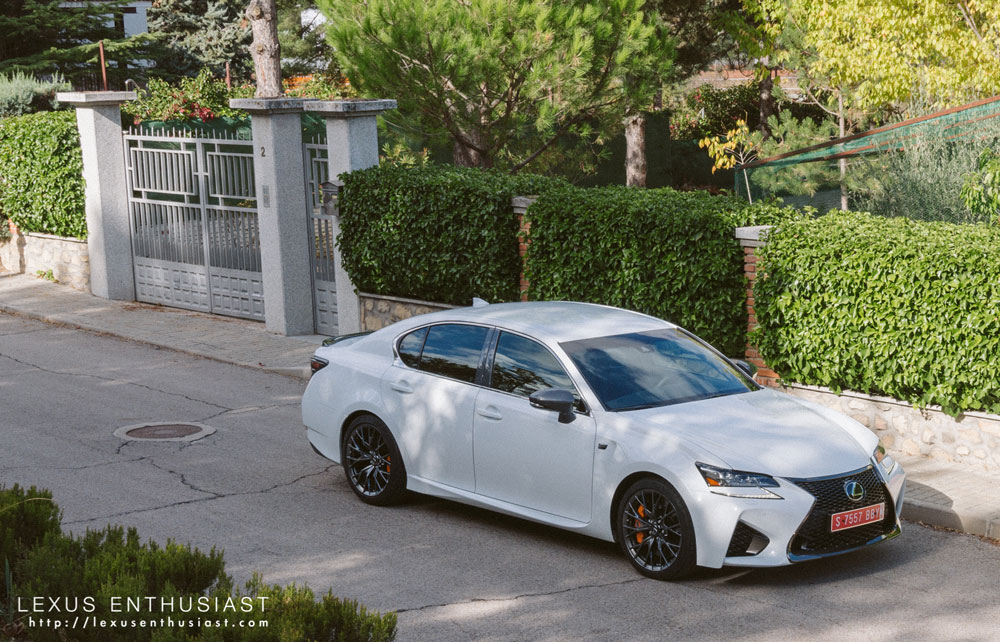 The lack of an adaptive variable suspension had me concerned about general road harshness, but Chief Engineer Yukihiko Yaguchi and his team have managed to balance the comfort necessary for every day driving with the edge expected from a high-performance vehicle.

Over the course of my two hour route, the refinement of the GS F shines through. This is a car meant to be driven forever, eating up miles effortlessly. The only real problem is staying under the speed limit — exactly the type of challenge you want in a 467-horsepower sedan.

Pulling off into the town of Bustarviejo, it was time for a closer look at the GS F. I’m a big fan of the current GS exterior, and see the GS F as the ultimate expression of the design. Starting off with front end, there’s an appealing smoothness despite all the hard lines and edges: 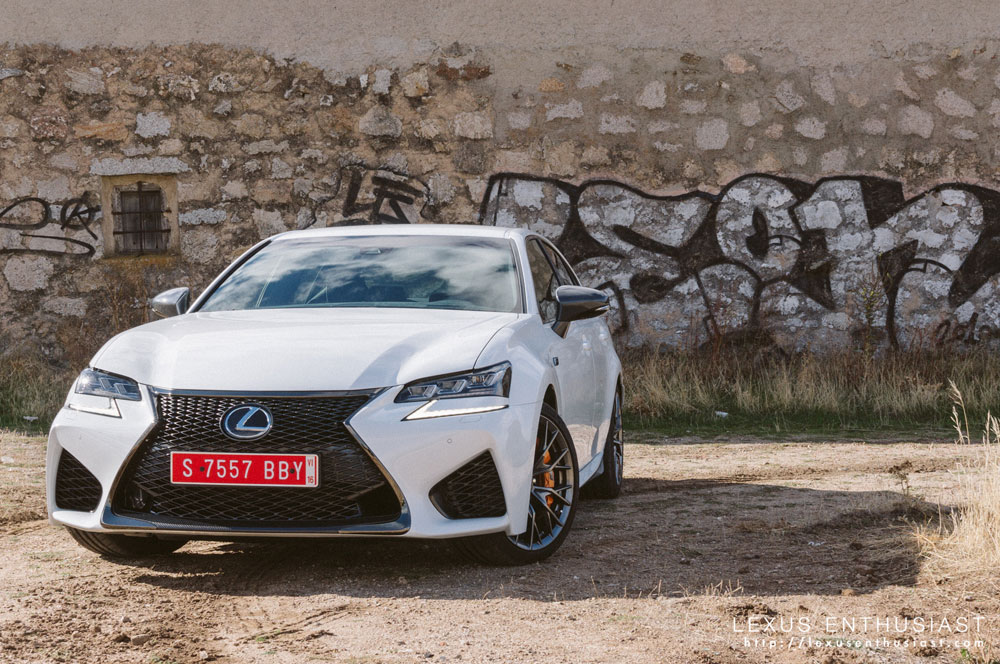 The two vents in the bottom corners of the front bumper are functional, with an oil cooler positioned behind the left and the transmission cooler behind the right — one of the finer details is the thinness of the outside fin of the bumper: 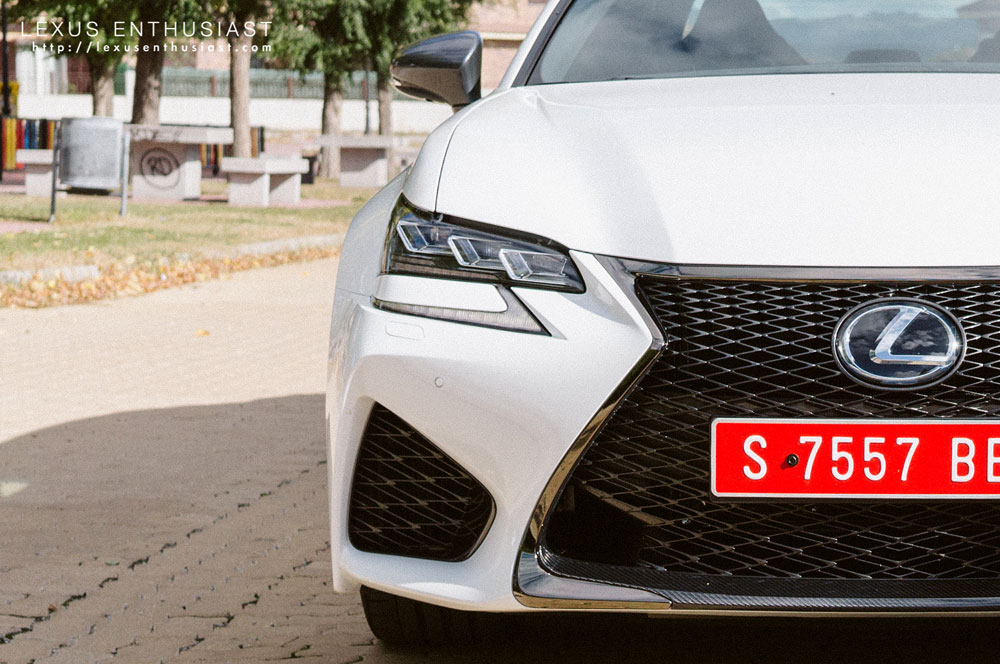 The triple-L headlights will be standard on all GS F models, and that’s a very good thing, as they bring a distinctive and premium look to the whole vehicle. The way the daytime running lights hook into the main light casing is new for Lexus, and signals an evolution in their headlight design.

The side profile is classic Lexus, understated and elegant even with the F-standard vents built into the front fenders: 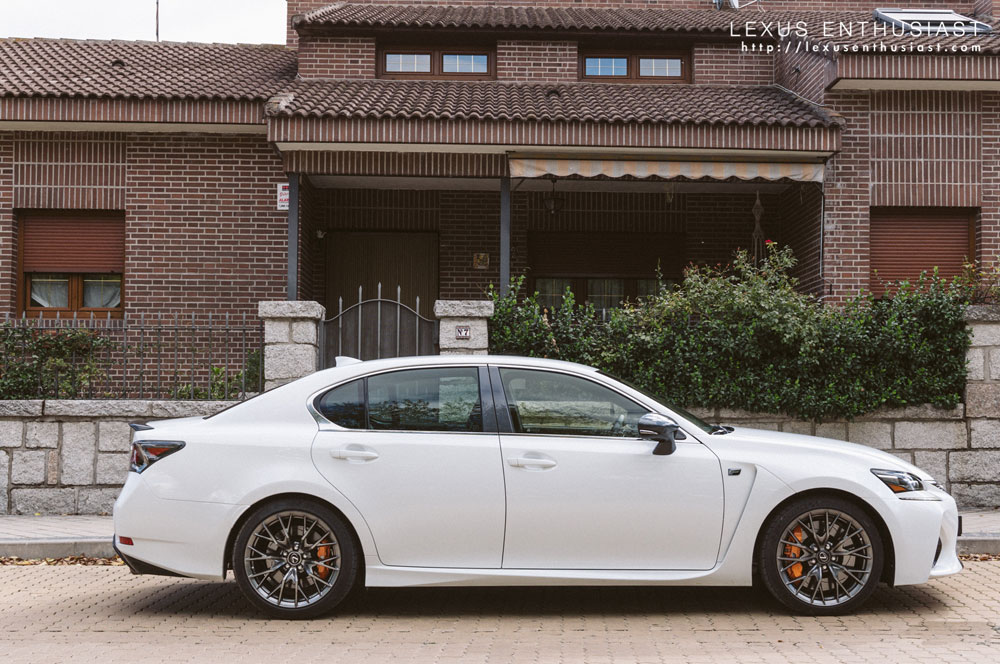 The 19-inch forged aluminum wheels are wrapped in 255/35ZR19 Michelin Pilot Super Sport tires at the front and 275/35ZR19 at the rear, and have all the signs of a BBS design meant to show off the optional orange brake calipers (black calipers are standard): 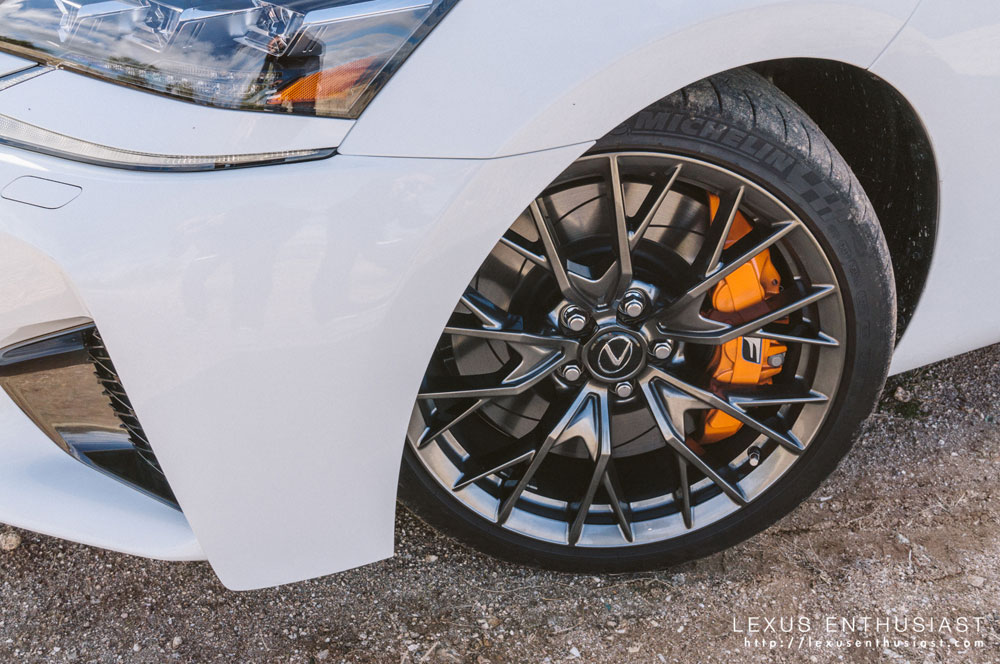 Moving around to the rear of the vehicle and my only real criticism of the exterior design — the black of the rear taillight surrounds, combined with the dark silver chrome trim and carbon fiber spoiler add a layer of complication to GS Fs at the lighter end of the color spectrum: 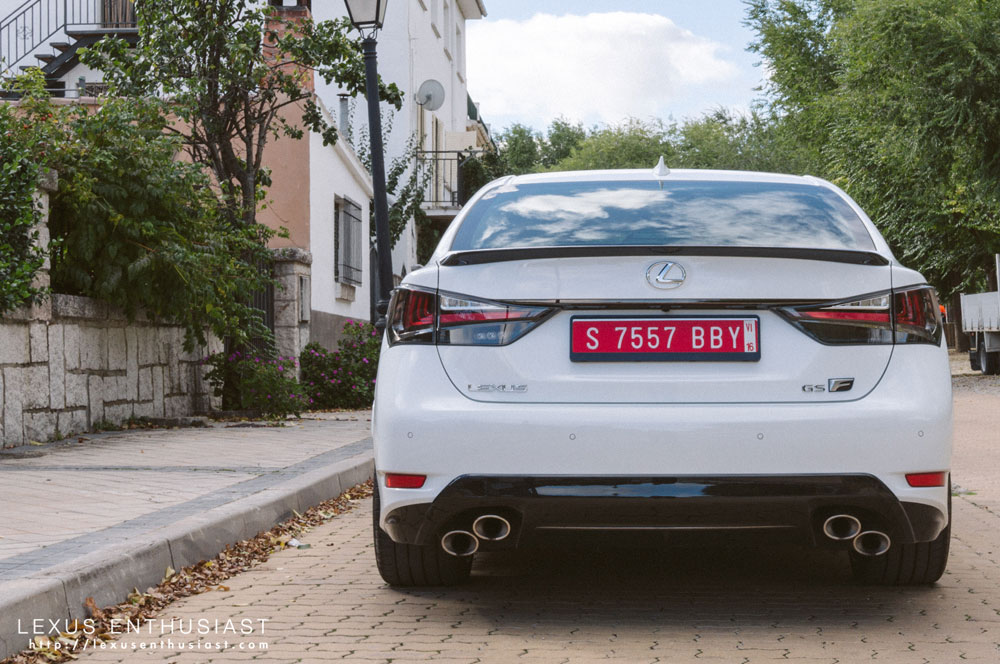 These dark elements don’t detract in the same way on darker colors, such as the GS F in Ultrasonic Blue Mica: 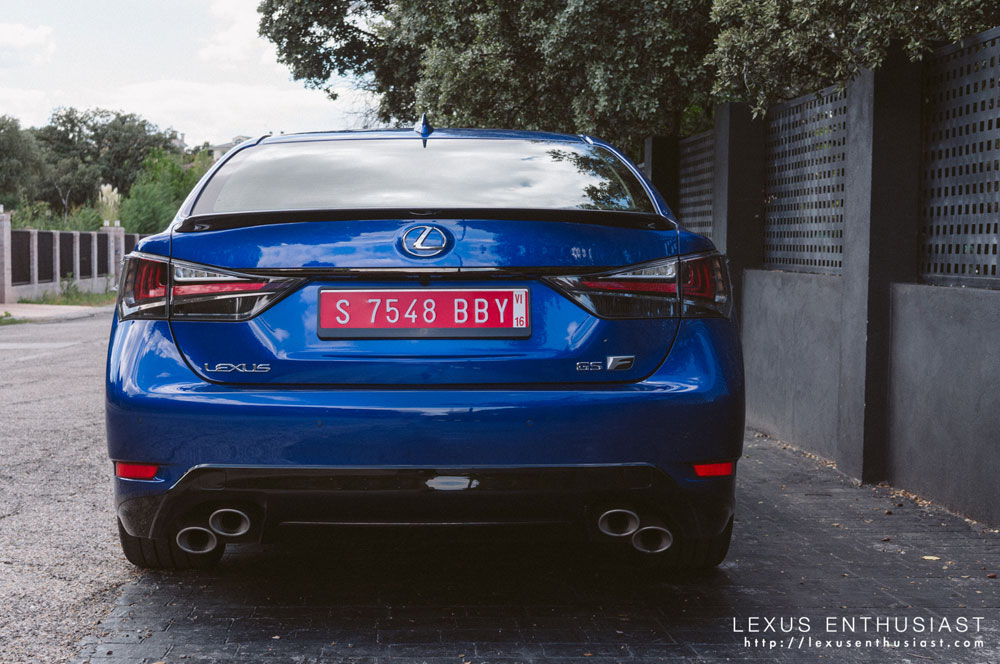 Beyond the standard front, side, and rear angles, are plenty of details worth pointing out — here’s a random selection of images of a Matador Red Mica GS F as a contrast to the Ultra White:

Inside the GS F 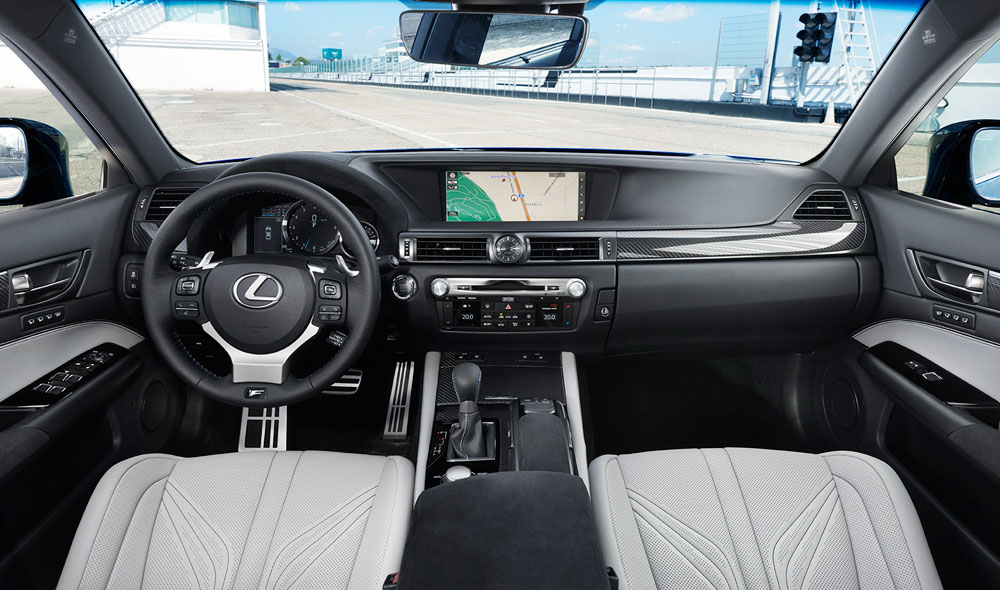 The GS F builds off an already excellent GS interior, which doesn’t require much in the way of upgrades. The biggest change are the high-back bucket front seats, which feature a stitching design that “closely mimics the skeletal and musculature of the human body for the highest degree of comfort and stability”: 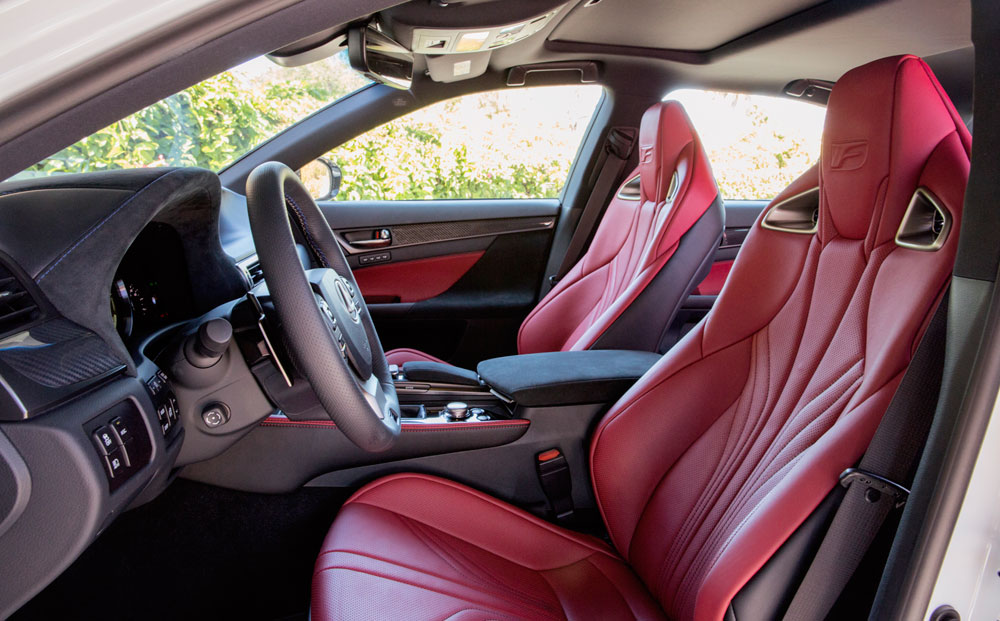 The other adjustments are small but meaningful — there’s a generous application of alcantara throughout the cabin, on the doors, the armrest, the Remote Touch controller:

Contrast stitching is everywhere, and it brings a very handmade feeling to the cabin — the interior feels bespoke, personalized. One of my favorite details are the LFA-style bolts on the dashboard: 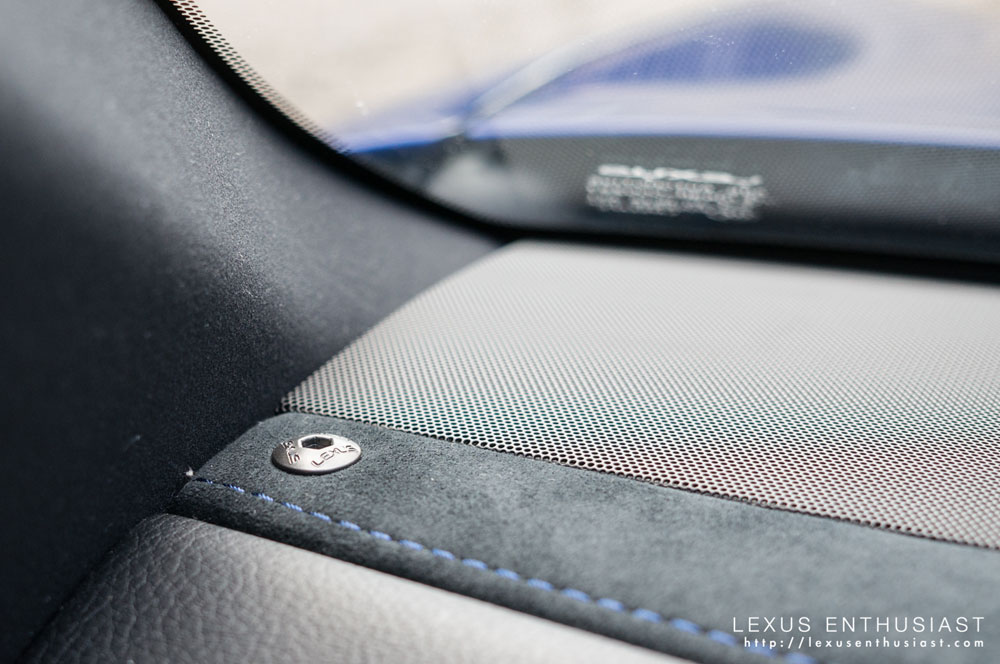 The carbon fiber trim is nice enough, but I also want to point out the gun metal accents used instead of the usual bright chrome work:

On the interior tech side of things, many of the features will be familiar — the 12.3″ central display, the F instrument panel, the Remote Touch controller, the Heads-Up Display, it’s all standard Lexus functionality. 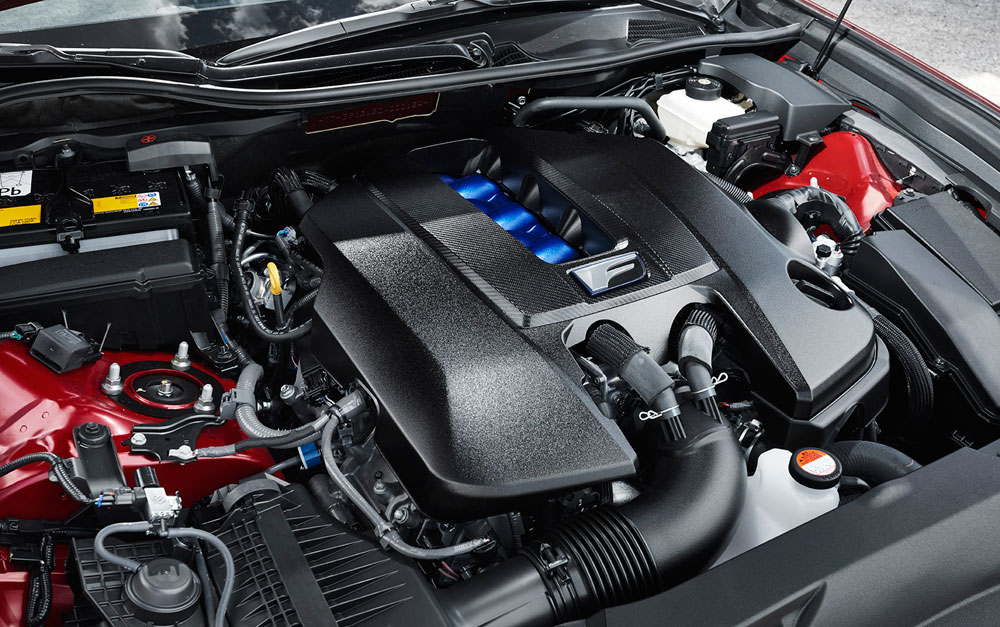 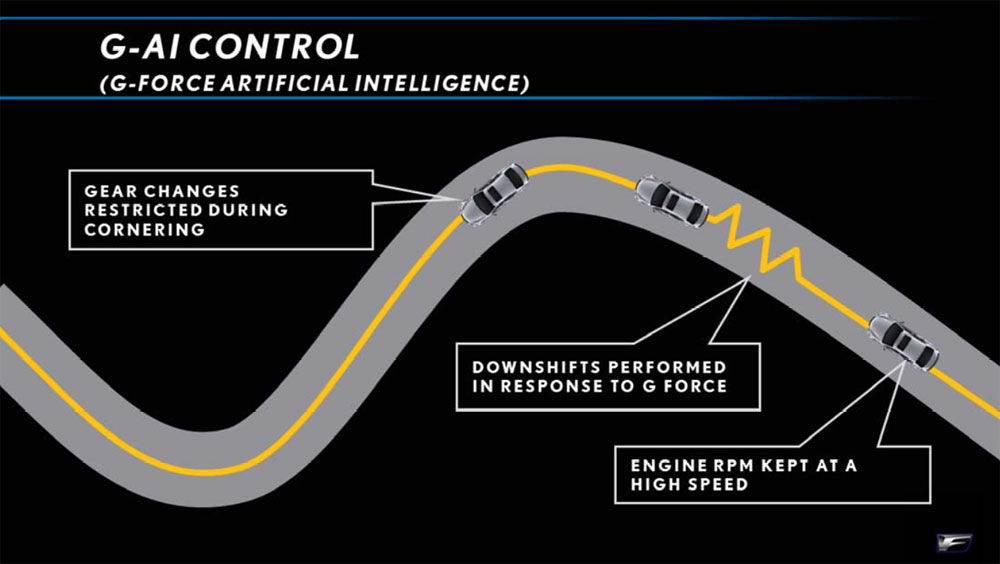 As mentioned previously, the GS F forgoes the Adaptive Variable Suspension for a more traditional double wishbone front/multi-link rear setup. The chassis benefits from improvements made to the updated 2016 GS, with an additional 188 points of spot welding, 73 feet (22,500mm) of structural adhesive, and 132 additional laser screw welds.

These are big numbers, and combined with four underbody braces, considerable improvements have been made to the overall rigidity of the GS F body. 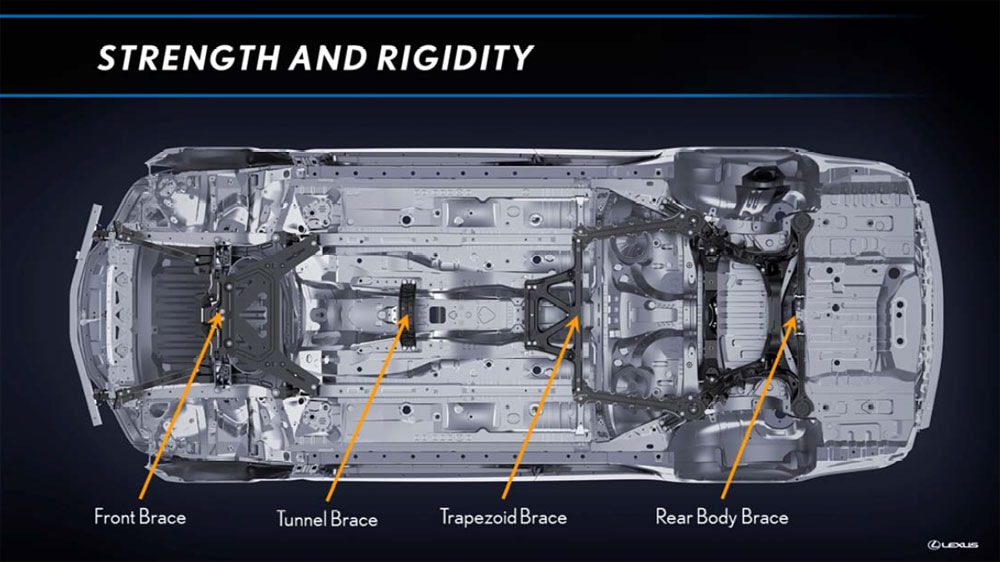 The Torque Vectoring Differential (TVD) that’s optional on the RC F will be standard on the GS F — this is a system that optimizes the transfer of torque between the left and right rear tires, and has three distinct modes:

After lunch, it’s time for laps at Circuito del Jarama, a former F1 track just outside of Madrid. Built in 1967, it’s an old course with plenty of elevation changes and corners large and small — very challenging for someone that only gets track time a couple times a year.

First up is the RC F, where a combination of nerves and unfamiliarity with the track had me fighting every corner. The RC F has this neat trick of augmenting the abilities of an average driver, but it requires a certain recklessness — six laps of Circuito del Jarama, and I was mentally exhausted. 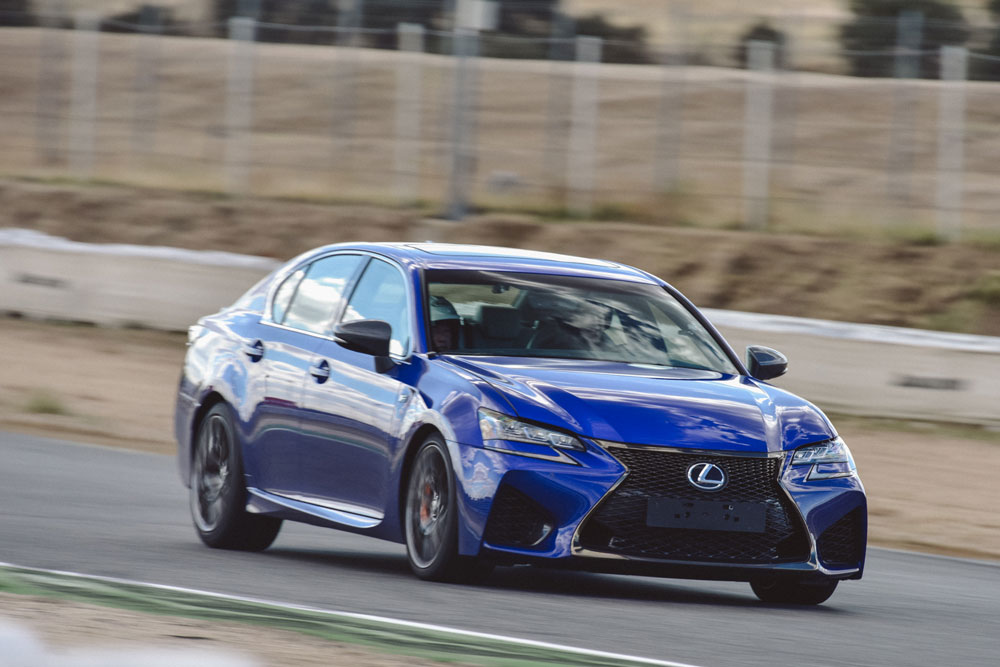 Moving into the GS F, there was an instant comfort right from the first corner. My personal driving style is more long-distance runner than sprinter, and I can think of no better metaphor to compare the RC F and GS F on the track. I could feel myself getting better on every lap, more awake, settling into my groove.

While the longer wheelbase had a great effect on overall stability, there’s a lightness of movement with the GS F — steering is precise but not heavy, the electronic power steering system detectable without being overbearing. 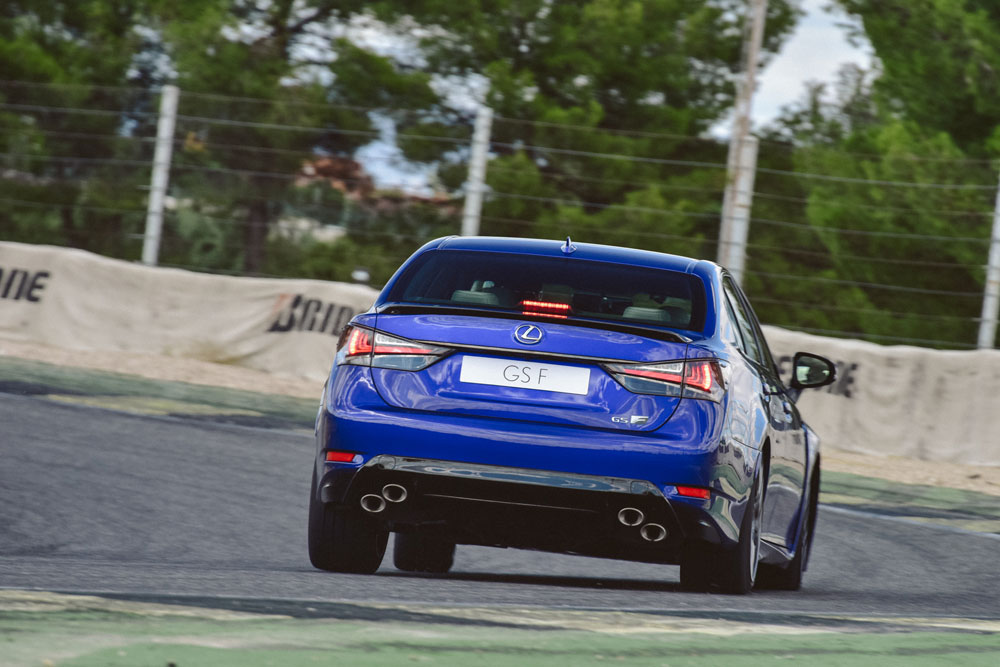 The variation in the GS F’s Drive Select modes — Normal, Sport S, and Sport S+ — can be felt on the road, but it’s on the track where minor differences become major changes. I start off driving the GS F in SPORT S+ mode and work my way down, and you can feel the electronics smoothing out the throttle and steering input.

Installed on the GS F is Active Sound Control, which electronically synthesizes the engine sound and pipes it through two dedicated speakers. The system is only active in SPORT S & SPORT S+ mode, and on the road, it’s a welcome boost to the engine note.

On the track though, Active Sound Control slips a little, unable to keep up with what’s happening. I found the mismatched sound a distraction, and was happy to learn there’s a switch to turn it off.

The GS F will be available in eight colors, including the flamboyant Molten Pearl orange: 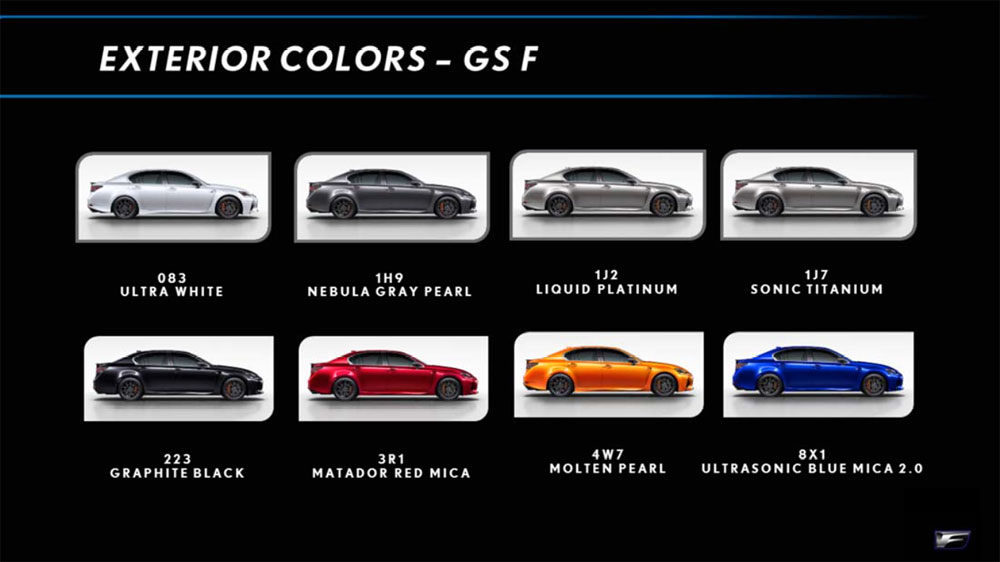 While Ultra White would likely be my personal choice, Matador Red Mica is especially well suited to the GS F. Surprisingly, there is no Obsidian option, only Graphite Black: 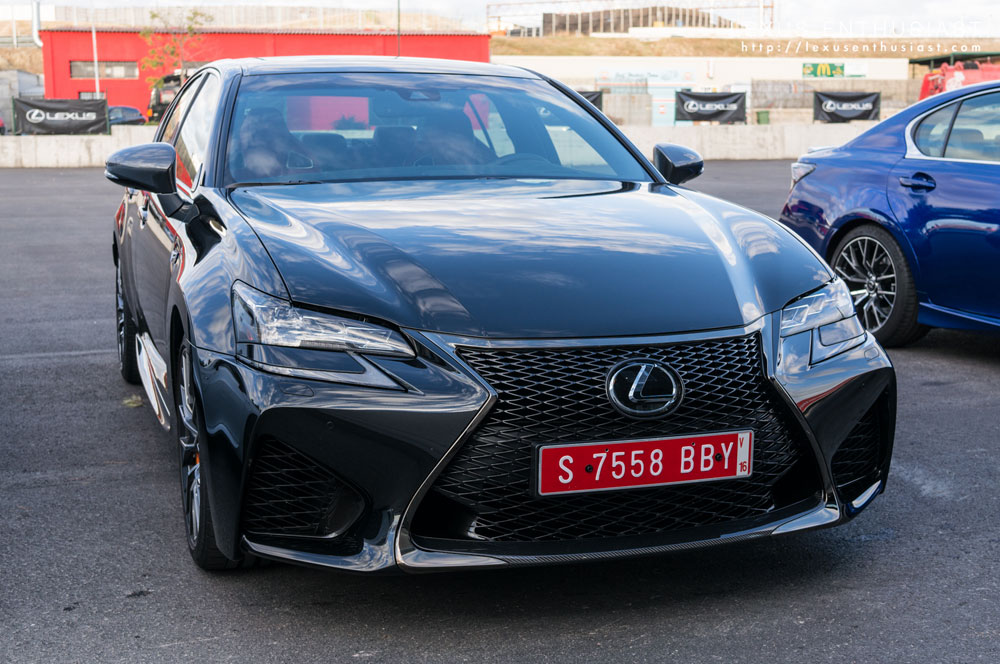 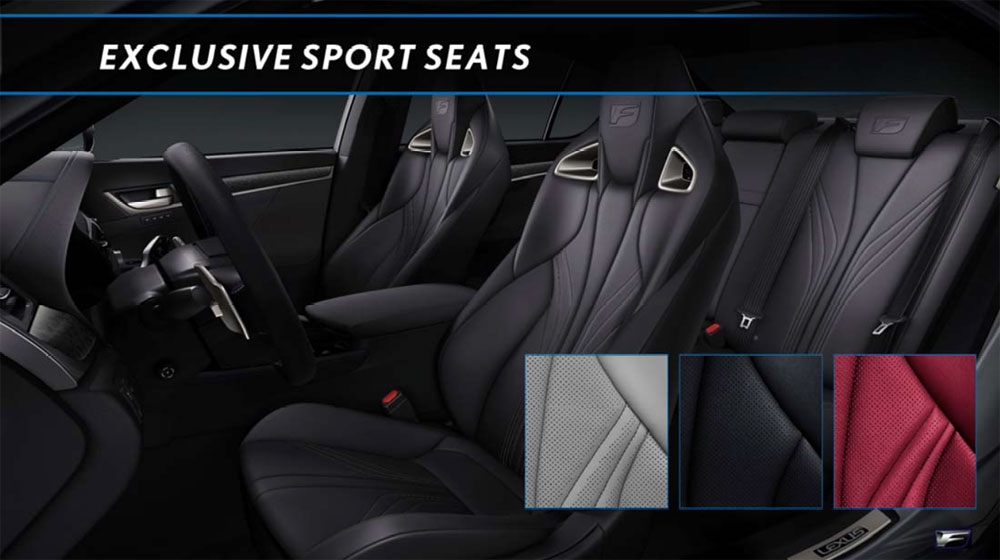 Nearly all the features outlined above are standard — in fact, there are only two options available: the orange brake calipers and the Mark Levinson 17-speaker sound system. Pricing for the options has not yet been released.

In the end, there is a sense of applied formula — take the core elements of the F brand, and fold them into the existing GS.

It would be easy to look down on this process, or to write it off as a shortcut, and yet it’s that now-standard package of F brand elements — the V8 engine, TVD, forged aluminum wheels, the sports seats, the suspension fine-tuning — that have transformed the GS into something much greater than the sum of its parts.

Molten pearl is my new favorite color next to the usb!!! wow...and those seats are gorgeous.
Not to be a fuddy-duddy but can't I have the calipers in Lex' Blue? ..Overall im loving this car, pure V8 rumble is an addiction of mine!
This is likely the best review Lexus vehicle in the history of brand... even European (UK) media gave it 4 stars, for instance CAR and Autocar...
This is the second GS F review I've read that rates it highly and above the RC F. It looks like Lexus has produced its best car since the LFA and damn, I really want one!
This will definitely be my next car.
looks surprisingly good in red! It's a good balance and overall performance package
With good chessi, light weight and TVD it will distroy the competition. I'm confident
This is the first Lexus which I don't think looks good in White! Definitely red, blue, black or orange! Anything but White! Too much going on and white sort of clashes with the dark wheels, orange calipers etc
That interior.... I could sit in that car all day long. Beautiful. The colors from factory are awesome. As far as the competition goes. This car is right on par with them but wont win because its has less power which is obvious. But I believe out of them all the Lexus is the best at the combination of ride comfort reliability and high performance. I cant wait to see how Lexus improves this car down the line and what new engine is gonna replace the Na V8 Look wise... mmmm I love the front end, its just mean and aggressive you kno it means business but the back im not in love with as the front. There something about those taillights that I just dont like. Kind of remind me of what they did with the IS300 taillights. Also i think the tailpipes could be larger in diameter.
http://www.caranddriver.com/reviews/2016-lexus-gs-f-first-drive-review
WAY above my price range but if the V8 is your seduction, I'd grab one now because everything we're reading on this site suggests it's done in the near future and onto the turbo era. You don't need to ask: Matador Red Mica FTW. Amazing front end treatment.
I would go for Nebula Grey Pearl/Liquid Platinum/Sonic Titanium exterior and definitelly red interior.