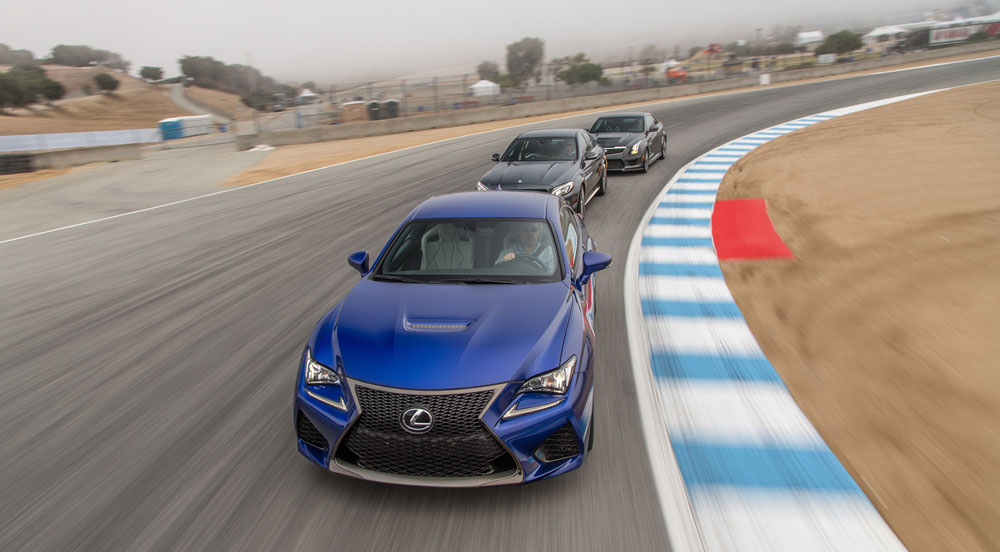 Problem is, the Lexus’ speed doesn’t translate to emotion, a much-needed qualifier when ranking contenders for Best Driver’s Car. Per Jonny Lieberman: “I want engagement. I want to be thrilled. What I don’t want is to get out of the car thinking, ‘That’s much faster than I thought.’ That’s the problem with the RC F.”

While I disagree completely with the idea that the RC F lacks emotion and take issue to many of the editor complaints, it was a undeniably tough competition this year — the Mercedes-AMG GT 3 and Porsche Cayman GT4 finished first and second respectively.

Well what did they think it was going to be slow..:? They were driving a high end sports coupe not the CT (which is great for what it's used for!) if you take the Lexus badge off and put the Audi, Benz, or BMW they would say it's fast enough. I guess haters are just going to hate. Keep it up Lexus and bring back the ISF...
Looks like they had the car without TVD. That could have been a problem too.
Lol they did a lap the car was on the automatic moode meaning the car was changing gears itself. Like top gear sometimes you get the feeling they don't want the RCF to prove itself faster then some cars. They complained about the N/A engine pulling like a snail but the more the time they spend on this car convasation change to complimenting this engine that it strong and responsive. Also they complained about the gearbox but at the end they ended up complimenting this box. I'm tired of these reviews
The problem is people don't understand Lexus as a brand. They still see it as the "luxury Toyota." They see that Lexus is trying to improve itself and introduce themselves to new categories like the RCF, but they don't understand that Lexus isn't going to get it the exact way they want right away. For this [RCF] being the first of its kind for Lexus, it's pretty amazing. Will they understand that? Never. Personally, the RCF is the better driving car. Hands down. It combines track performance with every day driving and reviewers will never understand how amazing that is and how much car enthusiasts and every day drivers appreciate that. It's not always about track performance. Also, I love the picture included. I cannot get over how sexy that RCF looks compared to the losers kissing its ass in the background.
Looking at all of the cars in the competition, I definitely expected the RC F would place in the bottom half. 8th may seem harsh, but I think it placed about where it should have and it's probably a good thing it fell that far. I feel the RC F's and it's Franken-chassis of a mistake prove to be a valuable lesson for Lexus moving forward in building performance vehicles. The RC F deserved it's own new platform. Trial and Error. F marque is still INCREDIBLY young, and they produced a beast of a car in the RC F. It's getting there, looking forward to that LC F/SC F!