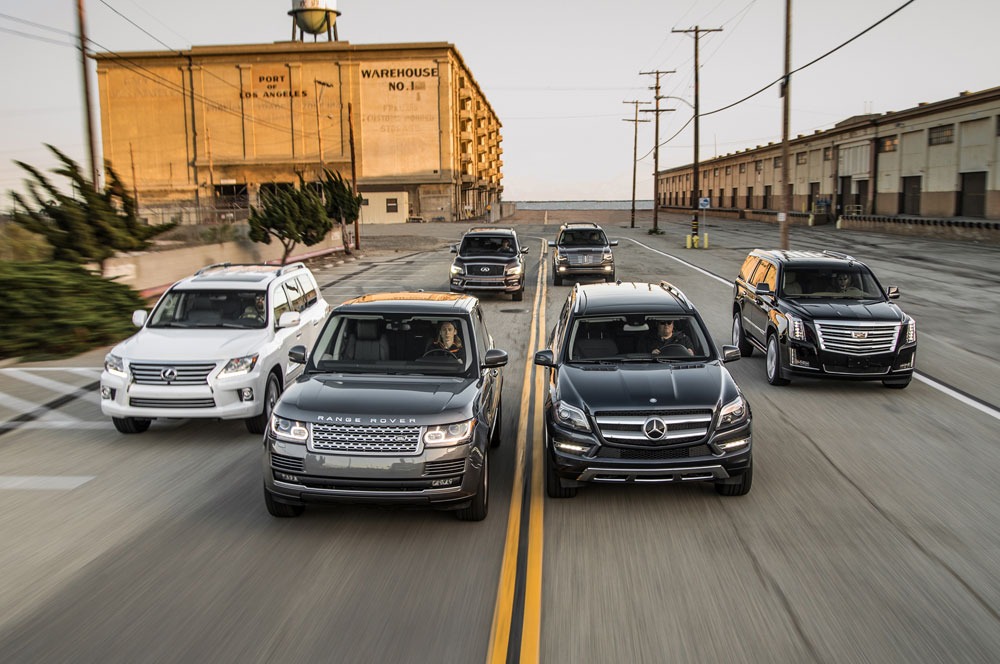 The Lexus is the oldest vehicle here by some margin, first introduced in 2007. It’s also the worst-selling by quite a bit, moving around 4,000 units last year, which puts it at just over 3 percent of the segment…Look, if you need to pre-run the Baja 1000 or compete in the Paris-Dakar Rally, the LX 570 is the obvious choice. But for pulling up to South Coast Plaza in gilded luxury? Not so much.

“The leather isn’t that great, the cabin materials are meh, the infotainment system is ancient — the Lexus is just plain old,” Seabaugh says. “Yet at the same time, there’s something incredibly luxurious about the capability the LX 570 brings to the table. It’ll fit in just as seamlessly at the valet stand in Manhattan as it would in a war zone in Mogadishu. Now that’s luxury.” I couldn’t agree more.

Despite its age, the LX has a unique place in the industry — it’s difficult to find another vehicle that balances off-road capability with high-end luxury.

(I won’t reveal which vehicle wins the comparison, but I’m sure anyone that follows this segment won’t be surprised by the result.)

Testing
How come its the worst selling? You guys forget that in the Middle-East it got 50% higher with the little changes in 2014 with the spindle-grill It obviously made a difference!! And for Middle-Eatern the LX570 is the MOST PERFECT SUV!!! Maybe its the worst selling in the US .... but NEVER the Middle-East Also, if you're comparing Lexus LX570 & The Range Rover Vogue HSE ... for SURE Lexus LX570 sells more in the Middle-East and forget about the Lincoln Navigator, Cadillac Escalade and Mercedes GL450 maybe for the Mercedes you ONLY get to see the GL63.
Well the car is selling very well here in the middle east, but really the car is quite old now, any information on when will the new one come ?
I am from Middle East also, I couldnt agree more! the LX sales aren't bad here, specially in KSA and Duabi.
Kinda odd that the LX is the only white vehicle in the test...
Third place not too shabby for a dinosaur hehe.
If column shifters are so space-efficient, how come every suv doesnt have one...
Why does the QX80 have almost 100 more hp than the Titan with the same engine?
The souped up Suburban, Expedition needs its own zipcode.