The Lexus LF-SA: A Teaser of the Geneva Concept

Lexus have released a teaser of the Geneva concept — it’s called the LF-SA, and it’s small: 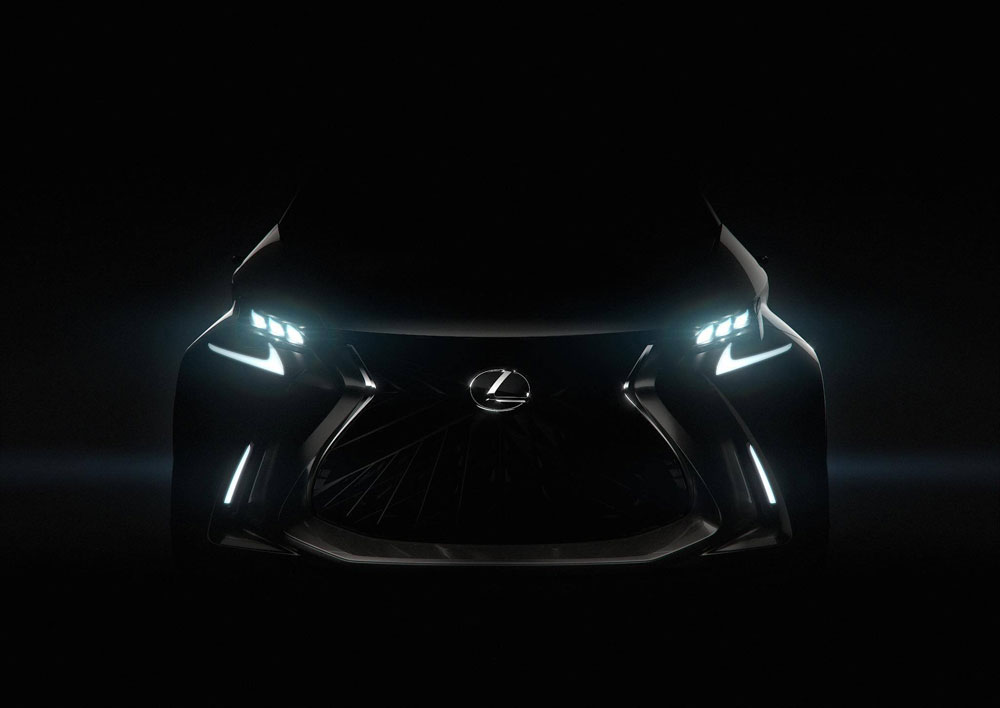 An illustration of Lexus’ passion for upcoming design trends, the LF-SA concept explores unexpected territories for the brand in a bold and emotional execution.

In a future world which many people see as increasingly influenced by technology and virtual experiences, the LF-SA concept is also a driver-focused vehicle, reflecting Lexus’ vision that real experience will remain ultimate luxury.

As with any darkened image like this, let’s brighten it up and see what’s revealed: 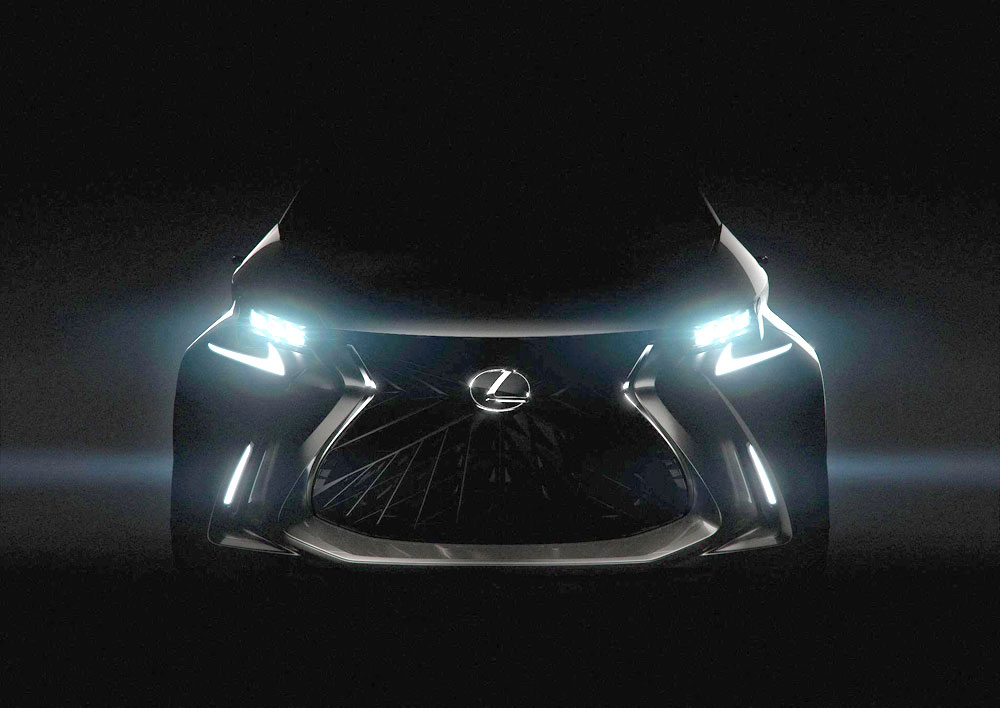 There’s plenty that can be seen in this image:

We can even analyze the name — the “S” could stand for small and “A” could be a nod to the “A-Segment” in Europe, which would make the LF-SA a potential competitor with the Mini Cooper, Audi A1, and Fiat 500.

Could Lexus really building a city car? Putting aside my personal feelings that yes, they absolutely should, a concept does not necessarily mean that a production model is on its way. Still, no point in assuming too much — there’s a limit to what can be determined from a near-black teaser image and a few letters.

Finally, a different grille design!! I'm tired of seeing a lot of mesh grille already, lol
It's almost certain that this is a city car; but one that looks so damn cool. Make it, Lexus!
They need to do this if they're truly interested in competing globally on the sales front. It doesn't matter if Toyota exists for this reason as some will pothesize. The the ES, based off the Camry/Avalon, and the NX, based off the RAV4, has proven that Lexus can share platforms "responsibly," aka better than GM.
This can be a a class type car or can this be a concept be a lexus version of the toyota C-HR concept?

Or if it was would lexus have titled it as LF-SX or LF-AX instead?
AX was Citroën at some years ago... I Hope neve see those two letters on a Lexus.... Moreover, one of the versions of AX is called TRD ... (the turbo diesel one ) LOL

S usually stands for sedan. I wait for a model based on C-HR, but not that too soon.
Shocking. Goes against Lexus' statement they will not go sub-30K, at least in the US... (of course, I'm assuming this vehicle would be sub-30K...)

As the Lexus badge is black rather than blue this should be a non hybrid vehicle.
Whoa, that's a pretty damn aggressive front! I'm guessing CT sedan.
This car will not go below $30, Lexus themselves admitted to the fact that a luxury car below that price isn't actually true luxury, and Lexus would never want to lose the essence of luxury in their vehicles. That being said, I'm a bit nervous for this move of a city car, however, there is no doubt there is an existing market for this type of car and a very rapidly growing one at that! Lexus always has a tendency to come into a category last because they take their time with R&D and when they release a vehicle, it is not there just to be there, it serves a purpose and when that vehicle comes out, it shows that Lexus has done their homework, I expect nothing less from this car.
I posted this too (on the NX vs GLA post). But yeh I think it's an Audi A1 competitor...I don't know what else it could be. Carefully looking at it leads me to the deny the belief that it could be a sedan. It has such a Smart Car slope in the front...
Looks Awesome :)
One word - WTF? Lexus is beginning to go nuts. Not to mention, it is based on a Yaris. Yuck!

I haven't seen any source saying it is based on a Yaris. Can you share it?

Guys, this is no A1 competitor. It is the Lexus version of the IQ/Cygnet.
We wait and see.. times are changing indeed, exciting at best! This could be a Supermini..
The A pillar seems very steep. This indeed suggests a small car. My gues is is a Yaris based compact luxury car. I'm basing my assumption on that the WRC version of Yaris with its widened front looks similar to me. PIC: https://i.embed.ly/1/display/resize?key=1e6a1a1efdb011df84894040444cdc60&url=http%3A%2F%2Fpbs.twimg.com%2Fmedia%2FBuSsp4FIcAE7iuX.jpg
Mercedes A-klasse as well as its derivative CLA is actually a С-segment car in Europe and his rivals are BMW 1-er and Аudi A3 both hatchback and sedan.

Did not realize the A Class had grown so much -- an assumption on my part, article has been updated.

I don't think it was accidental, it's been published openly on the UK Lexus blog this morning, with the following...The concept reflects Lexus’s passion for new design trends and explores unexpected territories for the brand.
It looks like It's based on Aygo, just in order not to compete with CT
I think a Yaris-sized city car is the safest bet,and a good idea too in my opinion.
For me it looks like based on Aygo. As long it is true Premium, I see no problem with such a car. Lexus is a Premium brand that should offer only Premium products, unlike German Premium brands that offer Non-Premium products when price is under 50K.
Updated with official information, including the full press release.
The new Euro Yaris is pretty good on highest trim level. A Lexus version of the Yaris makes sense. At least here in Europe.
What comes to mind is this old computer generated Yaris with a spindle like grille. It came out a while ago and everyone was sure it would be a new Lexus. Then we saw mash ups of a Yaris and a CT named AS150t. Now, that would be improperly named for S represents the sedans and lowercase t is now turbo. It should be called the AT150 for the capital T represents the wagons and hatch backs like the CT. But who knows...maybe it was sign that it was coming; Lexus just took a while to get it to the public.
Lexus AS? http://lexusenthusiast.com/2012/08/06/is-lexus-planning-a-city-car/
Lexus version of the Scion IQ???
To me it almost seemed like a xB...Lexus sure has us fooled on this one!
Perhaps it is a Lexus version the 2010 Toyota FT-EV, which may not even be highlighting a currently planned production model, but a feeler for what future could hold, and bring buzz to the auto show.

Picture.
This is the FT-EV by Toyota mentioned above.

Keep in mind that rumors have recently surfaced that a production version of the A-segment MINI Rocketman concept from a couple of years ago would be built as the second BMW/Toyota collaboration after the upcoming sports car. Perhaps a production version of Lexus LF-SA would be a derivative of this "baby MINI", and not of the Toyota Yaris.
The real bad thing about a either Lexus IQ or Yaris would be, that they will for sure get the same drivetrains (as CT and Prius). So be prepared for a 1,33 gasoline or 1,5 gasoline-hybrid Lexus with a whopping 95hp!
Driving the NX 450h+