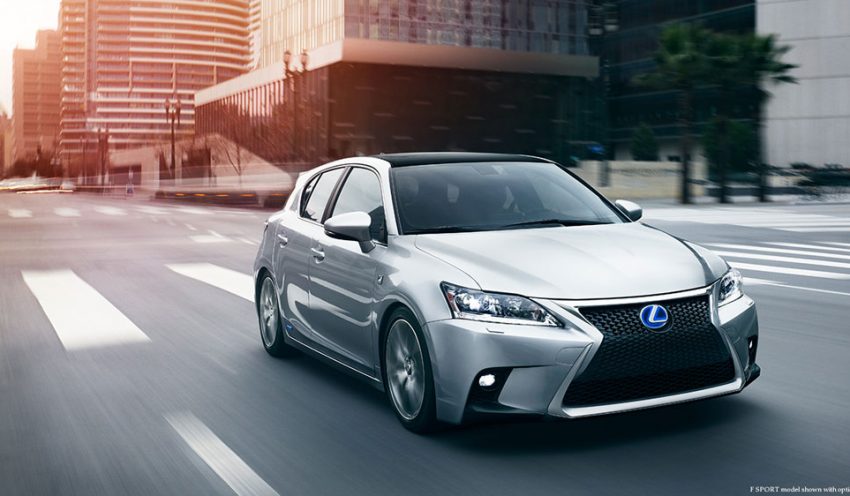 “At the moment this engine is being assessed for its suitability (for) other Lexus models,” Mr Hanley said. “It’s a logical enhancement for 2.5 litre V6 models.”

But will it find it’s way into the much smaller CT hatch?

Mr Hanley would not be drawn, but his repetition of the statement that this engine “is being assessed for a number of models” would seem to indicate that consideration is underway.

There’s not much here in the way of certainty, but it makes for an interesting discussion. The lack of power is the biggest knock against the CT 200h, and there’s a couple ways for Lexus to address the issue.

The CT is likely to continue with the Prius drivetrain as the base engine, but Lexus could:

I’m sure price would figure into any decision, but the bigger question is how important it is that the CT remain a hybrid-only model.

Hybrid was a key differentiator when the CT was released in 2011, but the hybrid marketing message has become more evolved and competitors now have comparable gas mileage. For every Lexus hybrid but the CT, Lexus offers a gasoline engine as an option.

What makes the CT so different?

New generation CT will be arrived around 2017, no turbo CT until that. In this year: IS turbo (from july), GS200 turbo (from Oct.), and new generation RX (incl. 200t) from oct. New, smaller SUV within two years (same platform as the Toyota C-HR).

What a load of rubbish; you obviously have no idea about Lexus product plans
Do you want to bet?
No need to bet; its obvious
Will see. ;-)
You'll be fired first
I think Mr.Doe's predictions sound quite plausible. And for those who disagree:please do so in a polite and respectful fashion.
What do you mean polite and respectful? What do you think we are? A great community that enjoy discussing things in a polite manner? I'd rather bash people that express a point different to mine and avoid making counter arguments ... :D :)

I don't find the CT 200h to be under-powered,but it can certainly handle more power. It is however unusual for a new engine option to be introduced this late in a model cycle. Either way,there is no car that offers anywhere near the refinement and sophistication of the CT anywhere near it's price. Dig that CT!!
Why not improve the Hybrid technology in conjunction with the new 2.0L Turbo engine?

I remember that I read a comment someone wrote here, who mentioned that Lexus is currently developing a 3.0L turbo hybrid and a 4.0L turbo engine. Another comment came from BD, who said that a 2.5L turbo engine is also in the works and will feature as a variant on the new RX. For the CT hatch, it would be turn to a performance hatch and whether Lexus would want to stick to the hybrid only for CT, remains a question. Expect Lexus to also spawn a performance CT wagon/shooting brake, maybe..;-) I somewhat agree with what krew worte in the article, they could possibly offer a CT300h, CT300ht and CT F 500h (my dream) From what I see happening with Lexus these days, the new concept, probably the CT sedan, would work in a way similarly to Avalon/ES pair, which in this case Camry/CT sedan. Since sedan growth is stagnating in US, and plummeting and shrinking in Europe and elsewhere, the only logical way is to create a luxury sedan to take some sales from Camry around the world. This way, the company can increase profit margins and sales. Cost of building the Camry has increased, but in order to stay in the mid-size segment around the world, price could not move much north. So, this is where the CT sedan comes in, I think. In Europe, the CT sedan and CT wagon could also replace the aging Avensis. So, hybrid will still be an important part for the CT family.

As far as i know there is a new Avensis on the way. Introduction early 2016.

If both the h and T model are available in the next gen, I would get the h again. I like the smoothness and eventual power of the 2L Turbo in my NX but the responsiveness takes getting used to, at least how it's applied in the NX. In short, I'd prefer the instant electric torque in city driving to be able to make quicker and safer maneuvers. My '11 CT was one of my favorite cars and the power was adequate for me.

i so agree with you regarding the sound and smoothness of the V6 - in my opinion it is this that puts Lexus in the class above the rest. Will be sorry to see the demise of this motor - agree it possibly needs some work but hopefully Lexus will still offer a V6 normal aspirated motor. Besides anything else it is absolutely trouble free and totally reliable.
I loved my '07 IS 250. However, the engine is known not to be so reliable. It had carbon buildup issues. Drivers would report sudden engine power loss and/or idling issues. I've been clamoring for the 2.5L hybrid power plant from the Camry hybrid in my '13 CT200h and calling it the CT300. I know Toyota has dropped in a 2GR-FE from the Camry into the Corolla Matrix in Japan. It's marketed as a gentleman's hot hatch. This means they have the room for something wild. Maybe even the 2GR-FSE and call it the CT-F!

I was a few months back in Dubai, will have to go back someday. This, and so many other things to enjoy in VAE.

It will just get the new Prius powertrain. End of story!
Seriously if they make one. I will be first on the order list ** (Make sure to have a 6-spd Manual gearbox w/Helical LSD none of those Torsen viscous crap. Or Dual Clutch 7spd???)
After driving a regular CT for 6k miles and then getting an F-sport version I walked away being very impressed with this car. I of course would love to have more power, but the refinement and handling of this car made me happy.
Firstly Lexus is going about this the wrong way the CT should first be seen as Hatchback not Hot hatch before it can be considered a hybrid , only then the option of adding turbos becomes a reality. But until then it will never receive the turbo treatment.
The LX 600 IRL