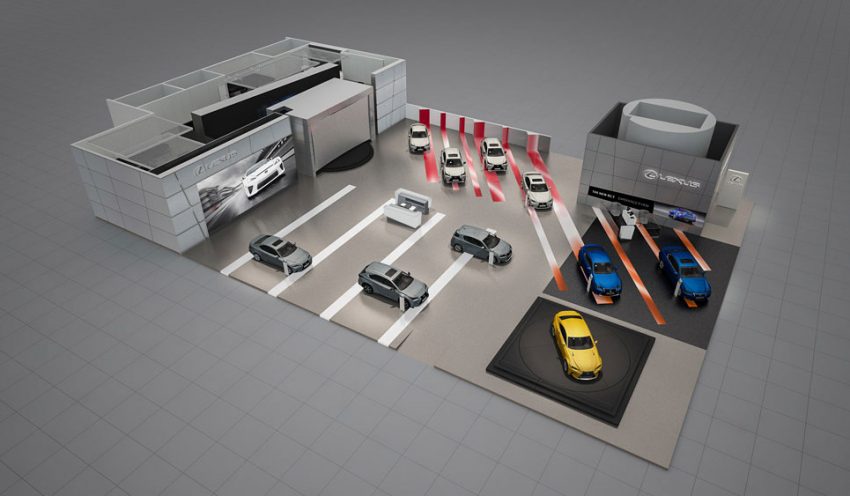 Lexus has announced that a new concept will debut at the Geneva Motor Show in March. Details are nonexistent right now, here’s the full quote from the Lexus Europe press release:

Finally, during the Lexus press conference, a new Lexus concept will have its World Premiere.

Lucky for us, Auto Express did speak to someone at Lexus:

But when asked about a successor to the £340,000 supercar appearing, a Lexus spokesman said that “couldn’t be further from the truth”. He went on to describe the new concept as “range-oriented” rather than an exclusive supercar built in small numbers. Whatever the “future-facing” concept is, its design will influence the firm’s models in the years to come.

(Why Auto Express would ever think this new concept was a next-generation LFA is beyond me.)

The “range-oriented” quote is a clue, however minor. It’s a curious phrase to use — I read it to mean a concept based on an existing model, but it could easily mean any number of things. It does appear to rule out a real-life model of the LF-LC GT concept from Gran Turismo though.

It’s also worthwhile pointing out that the reveal will happen in Europe — this makes me question an RX concept, as the model is much more popular in North America.

No matter the concept, one thing’s for sure — Lexus is firing on all cylinders right now, and the pace just keeps picking up.

So excited ... Keep us updated!!
Any leaks of such models!! I'm sooo impatient!!

I completely agree I come on this site multiple times a day expecting brand new models like once a week and than I realize how unrealistic that is...but I continue to dream of new Lexus models! Go Lexus!

Yes, most likely that.

Next month I am visting this concept in geneva. If some one likes I can makes shots. bestgreetings from swiss

They should at least release a teaser image soon...as in now please.
"Range-Minded" sounds like a new technology being released. Range, as in distance minded...new hybrid technology, or possibly the hydrogen fuel cell tech we have been reading about lately? Or, " range" could be referring to Lexus testing the "range" of their technological abilities. Still possibly a new hybrid technology, maybe integrated into a new LFA-Like concept. We all know how Lexus is pushing the limits on design, now lets hope it's next push will be for new technology. C'mon Lexus, lets see a game changer!
Looking at the floor plan - There's no RX or LS in the pictures shown. As the spokesman said its "range based", I have a feeling it may be the LS concept (which according to my sources is insane!)
If the picture is any indication of what will actually be at the show. I just realized that the yellow coupe in the bottom right is not a car I have ever seen before. Save the picture to your computer and zoom in. I originally thought it was the LF-LC2 with the top up but the rear end, bumpers and hood don't match. Look at the LFA style vents in the hood! Its definitely not an RC , its too long...Any ideas what we might be looking at? A near production ready LF-LC?

That yellow car is certainly something new. It's a bit reminiscent of the LF-CC from few years a go. Vents, lights, proportions. Its grille is about the same size as the IS', if not a tad smaller. So it makes me speculate that it could be a coupé that sits between the CT and the IS in terms of size - just as the RC sits between IS and GS.
I agree, it does look similar to the LF-CC...interesting...
It is the LF-CC, or rather a 3d model of it. Anyone can see that, even you guys.

The official Lexus Europe site has posted another view of the Lexus Geneva show stand ( http://www.lexus.eu/lexus-today/motorshows/geneva-motor-show-2015/index.tmex#/Introduction ). Sure enough, the yellow car is the LF-CC concept. It has seemingly been repainted in the same yellow gold color as the LF-C2, which leads me to believe that they just used it as a placeholder for the LF-C2. I'm betting that the new concept will be placed and unveiled in the back of the stand, to the right of the large photo of the LFA. And what will it be? Concept predictors for the next-gen LS or RX, or a closer-to-production LC concept are the 3 likeliest possibilities, with a concept for the next CT a long-shot, unlikelier fourth option.

Great find -- what's weird about the second image is that there's actually a vehicle in the place where the new concept will be unveiled. Attached an zoomed-in image, looks like a small city car.
They sure like to keep us guessing!
Oddly, it almost looks like the Aston Martin Cygnet (Scion iQ) with the 2 hood marks, and the upper and lower grills.
We all know how poorly the iQ fared as an Aston Martin. For the love of god, it better not be a Lexus Cygnet.
You were right. They updated the picture again. But it doesn't have a spindle grill. I'm really confused
They are playing with our sphincters coz they are air-tight with anticipation!!! ...aaaall in good time..

Allow me to remind us all of an interview conducted by Motoring Australia last year. Check out this Lexus Enthusiast post: http://lexusenthusiast.com/2014/10/03/lexus-build-ct-based-sedan/ A small, CT-sized city sedan/coupe is what I'm putting my bet on. Only time will tell whether Fukuichi was telling the truth.

Can't believe I forgot this. :<

Should Lexus build another LFA?