Lexus UK has published an extensive photo collection of the LF-NX, showing the compact crossover concept from all angles:

On appearances alone, the LF-NX is pure bad-ass. There’s some similarity to the LF-CC concept, but with the super-angular slashes of a Lamborghini (?!?) — hard to say how the concept will transition into a production model, but right now, the LF-NX is unlike anything else in the compact crossover segment (save perhaps the Range Rover Evoque). 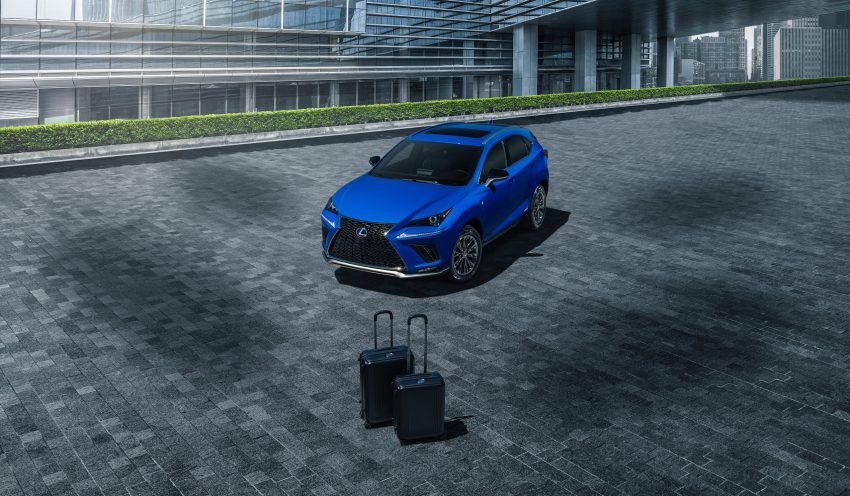 It's like if BlackDynamiteOnline pared his Daewoo With a Nissan Juke and added some of his home made styling-parts. Lexus cant sink any lower than this and theire designers should be fired. L-finesse is dead!
Sad thing is that the New coupe they are testing now, probably will share some design-cues With this horribly designed concept car.
Ugly or not... it will be 'talk of the town' at the Frankfurt IAA. Better polarized opinions than a grey non-event in the mass. I surely expect a production model which is a lot more down to earth, with styling between concept and new IS style.
I See a new mini RX in here.. i would hope they keep the front end and the interior
...not sure how I feel about this car, but looks like if you swipe your finger on this car you will cut yourself.
Once its toned down I think it will look great. Its a bit too rough and sharp right now but the production car won't be. I like the overall shape. Kind of reminds me of the Mazda CX5, which is a nice looking crossover.
Too square at the wells.
I love the front, the back is hideous. Tone that down Lexus!
HOLY..................... Is this for the next Transformers movie?
Looks like the Cayenne and the Evoque had a baby in the set of a transformers movie.
If you dont like it, shut up and go buy a BMW X5. Lexus must not tone down anything from this. The evoque did not get tone down. If you dont like it go buy a Audi and stop toying with lexus cause it clear you people dont know what you want. This is as aggressive as the Evoque

I think if you Straight the sheet metal of the side (the doors) Tone down the wheel arches Give it the RC front head light and the IS rear light Replace the mirrors with a production Lexus ones Take down the rear plate a bit and just minimize the down end ----Then you will have the exterior production ready
I love it. The production one would be the combination of the RX, IS and the Venza.
Now I definitely see the Lamborhgini SUV concept in the NX. Very bold Lexus, very bold, and I LIKE IT ! Can't wait for the prod unveil, supposedly at the Tokyo autoshow in November.

How come it's so popular to use the word 'bold' and 'Lexus' in the same sentence? I hate this expression.
dude, everything changes. Lexus wants to evolve and thats the reason why they are started daring their designs. If you dont like it, better stop pretending to be an enthusiast. Lexus knows their business and i believe they are doing it right.

It's alright polarizing opinion with something outrageously ugly but you risk turning away committed enthusiasts. I was blown away by the IS and have one on order. I was eagerly anticipating the NX as I expected it to take forward design cues and would be a beautiful car of a perfect size below the RX. In ‘krews’ sales report he observed not only is the IS selling well it has started to capture sales from BMW, Audi. I could deduce from this that BMW, Audi exec would be getting a bit worried and shaking in their shoes, but having seen this ‘effort’ I think they must be laughing their boots off. If ever there was a case of ‘snatching defeat from the jaws of victory’, this has to be it. And to the guy who says go buy a BMW, Audi or Evoque. I don’t ever want to buy one, I want to buy a Lexus.

Those of us who have been loyal Lexus owners for years don't want to buy another brand. I held my nose when we bought our "spindled" 2013 RX. I look at this NX and wonder what next? Tesla's forthcoming SUV is looking better and better. Have you read Tesla's reviews lately? Elon Musk is determined to build the best cars in the world . . . and from the looks of things he is well on the way. Look out Lexus!
It makes the Evoque look old, that what important. If lexus do the toning down like you guys command. Audi is probably coming back with a whipping of new aggressive designs
It makes the ugly Evoque look better and the very Nice Discovery look even better.
Well mybe you should consider getting yourself the Discovery. I find the Evoque to be to girly and im not a girl. The Discovery is a good vanilla. I want lexus to make a lexus not a Discovery
I thougt you said the Evoque was "super aggressive" and now suddenly you find it "girly"...
Yes Supper aggressive in a girly way. It like the mini, very aggressive but in a girly way. This lexus is aggressive but not in a girly way. Evoque and the min are the two cars i would never let you see me drive them