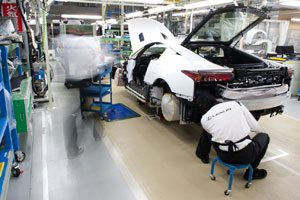 Motor Trend visited the Lexus LFA Works at the Motomachi Plant in Aichi, Japan, and have published what may be the final article on the unique supercar factory.

(The photo gallery is quite a sight, highly recommended.)

Read the Motor Trend tour of the LFA Works

Though, Motor Trend has proven over the years time and again to be the absolute worst automotive magazine of all times and to be a poster child of pure gonzo journalism in a  desperate attempt to sell more magazines through generation of controversy, I will give credit where it is due. It is a very well written article and definitely the pictures are superb.
Loved the article.  Of course, several other places told this story first—including some excellent videos.  But it probably cannot be told too often because it re-inforces the idea that the LFA was "peak auto."  There has never been an organization that had so many resources combined with a management willing to spend whatever it took to build a niche automobile.  People who understand the process of building high-quality and difficult goods are understandably VERY impressed. Unfortunately, the terminally stupid are with us forever.  Read the comments.  According to  some, the LFA cannot be a great car—no matter how much effort went into making it perfect—because it is a Toyota.  A rice-burner!  Poor saps will NEVER understand that Lexus are special cars because Toyota first learned to build excellent cheap cars BEFORE it moved up the ladder.  This is why our Lexus are more reliable than a Toyota pick-up—an unheard of luxury in a premium car with lots of systems.  But these dumbos think that it is impossible to have a high-status car built by folks who make Corollas and Yaris.  My guess is that fool has never built something more complicated than a birdhouse. As for me, when folks criticize Lexus for its Toyota roots I just say, "That's the best part of my car.  You are saying this as if it's a bad thing."  And if anyone calls my car a "rice-burner" I just assume they are dangerously stupid.