Less than an hour before the Lexus LFA makes its second appearance on the Top Gear TV show, Jeremy Clarkson’s Top Gear Magazine article on the Lexus supercar has shown up on German Car Forum — here’s a quote:

I love the LFA a lot. So much, that I recently described it as the best car I’ve ever driven.

Naturally, this caused both [Richard] Hammond & [James] May to scoff loudly. Mainly because — as they kept pointing out — it costs £359,590. That’s nearly five times more than a Nissan GT-R which, if anything, is even more technical. It’s way more, too, than a Ferrari 458 or a Merc SLS. It is, they argued, a stupid price. 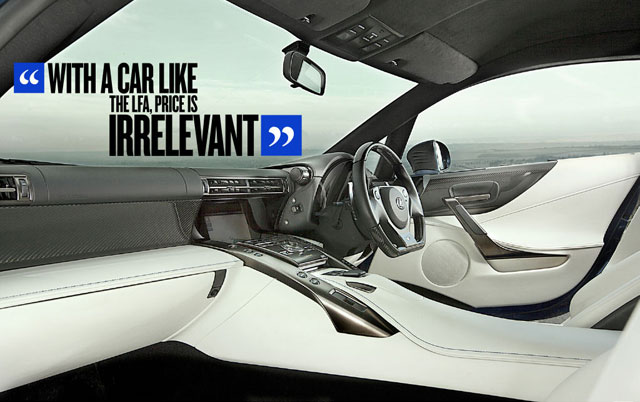 The full article was also uploaded by a good samaritan:

The Lexus LFA will also be appearing on tonight’s Top Gear episode, where it will go against an Aston Martin Vanquish and a SRT Viper — looking forward to it.

Jezza gushing about a Lexus?! Surely there's something in the old testament about this being a sign that the end is nigh? ;-)
Top Gear has just finished and the yellow LFA came off very well.  Jezza said again it is his favourite car.  James May rather liked it as well.  Main problems were the small fuel tank, lack of a cup holder and the small seat belt.

Waiting for it to show up online...can't wait.
Funny how it's a Lexus this time that has problems with cupholders! Normally, that's a German thing!
Yes... Jeremy Clarkson actually said - it is the best car he has EVER driven..... now that is a wow - can't wait for him to try out the new IS.....
and iPod ports *roll eyes*

Sounds like Jezza wants an LFA! Maybe he already bought one. (;
Thanks for the scans, Krew.
I think Top Gear needs to give the LFA a fair (dry) hot lap attempt on their power lap board! It really annoys me that they picked a wet day to give the LFA a run, when they did not do that for almost any of the top contenders. We just want to see a dry lap thats all, preferably in a Nurburing Edition, just to see where the LFA stacks up against the best. If you say its the so called best, Clarkson, then at least give it a fair shot so we can see what it is capable of..... I think Lexus fans, especially high level ones, who agree should try to petition the show or something so we can see this happen....

The LFA owns Nurburgring.  Let the competition catch it where it counts. I couldn't give a funk what Top Gear says..... BD

Clarkson should have driven the Lexus Lfa NE edition and see what he has to say...
If the Nurburing Edition shows up on Top Gear, I believe James would say something about how all cars tested on the Nurburing are stupid.
Top Gear, probably will do the lap test with the Nur edition but I don't think any owners would let them borrow that car for a day. Do you guys know if there is even 1 owner of a Nur Edition in UK?

Our boys (Akio, Mark, Karl, Andrew etc...) can make it happen if they wanted to. Lol they just raced a learjet, im sure this cant be such a big hurdle to be overcome.....

Boy did it take those British road tester journos long enough to get the message on the LFA! You cant be a pedigree snob and at the same time expect to discover the LFA's true qualities.
Driving the NX 450h+