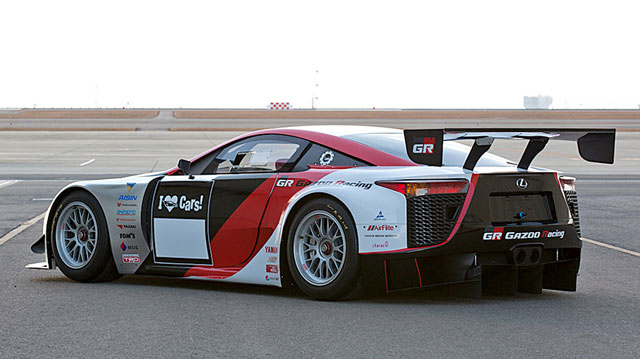 A video was also released showing the LFA and a Toyota GT86 race car:

So far, no technical details on the new LFA racer have been released, but it will be entered into the 2013 Nürburgring 24-hour race in May.

I wish that they bring 2 LFA's to the Nurburgring 24 hours and hopefully Gazoo improved the reliability considering the two consecutive years with engine failure in '10 and '11 I believe.

LFA did not have any engine issues in 2011. The LFA was # 23 before a BMW crashed into the LFA from behind putting it out in the pits for several hours. Last year, in 2012 LFA placed overall #15 and won its SP8 class beating out GT3 class cars like the MP4-12C (#31) and the production model Nissan GTR in SP8T class (placed #51).
One of the 2 LFA's had to swap engines in 2010 and I believe one of the 2 LFA's from 2011 also had to swap engines. I recall the 2010 issue was "foreign contaminants" in the fuel, don't know what the problem was in 2011. So hopefully they don't run into any issues as 2012 proved they can get a high finish. Still wish they brought a pair of LFA's though.

Can't wait till May to see that LFA in action!It looks pretty serious!My birth month too,so a win would put me in pretty good spirits!
Wowww....I can see they made big modifications in the LFA - Big side vents in the front,something more?- Will be interesting this year what this LFA can do - I know LFA sold out but this race mean something for the future for Lexus super car - personal now look more compact and strong.
Notice how the side vents behind windows have shrunk to tiny sized compared to the older racing car (and production LFA). Now the radiators are getting that massive amount of air either through those small vents or some alternative source. The broad "shoulders" because of the lack of the tall vents makes the LFA look so much more muscular directly from behind and front.
They only competed with one LFA last year and two GT86's.  LFA placed first in SP8 class (15th Overall), while GT86's placed first in SP3 (46th Overall) and 6th in SP3 (65th Overall)
Driving the NX 450h+