A Closer Look at the 2014 Lexus IS Exterior

The 2014 Lexus IS has been revealed, so let’s take a closer look at the exterior of the next-generation sports sedan.

Circling around the car, the front end is angled with curves and creases, with plenty of new design elements (click any image to see a larger version): 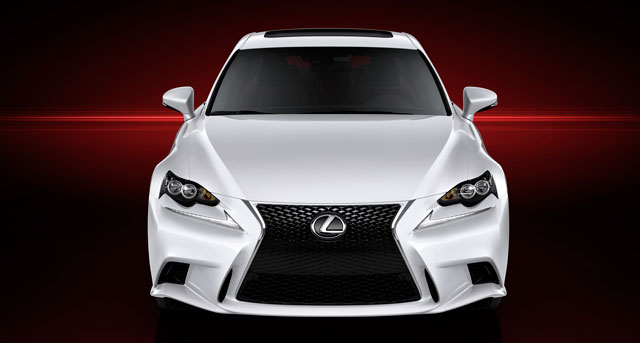 For the first time since the spindle grille was introduced, Lexus has hidden the dividing bumper between the upper & lower grilles — it’s still visible behind the mesh, but just barely.

In a neat design trick, the grille pattern also changes from top-to-bottom, inverting from fat to thin L shapes: 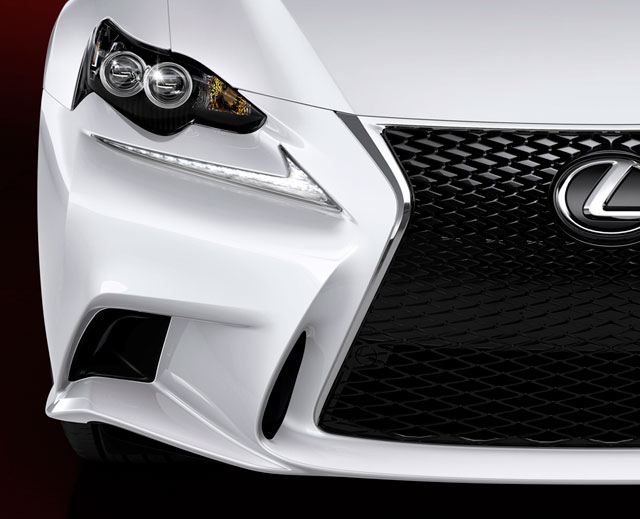 The headlight design takes some direction from the LFA, with the casing curved around the bulbs, and also marks the first time the daytime running lights have been separated from the rest of the encasement.

Next up is the side profile, where the resemblance to the LF-CC concept is very clear: 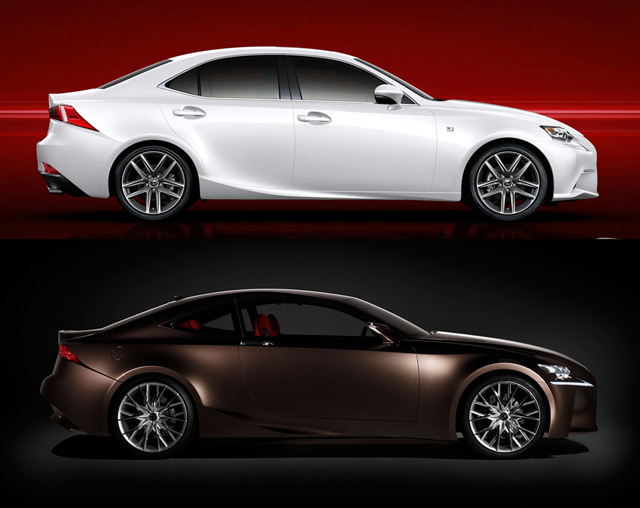 There’s a couple kinks in the rear taillight that throw off the lines a bit, but the double swoosh of the rocker panel and rear bumper looks great: 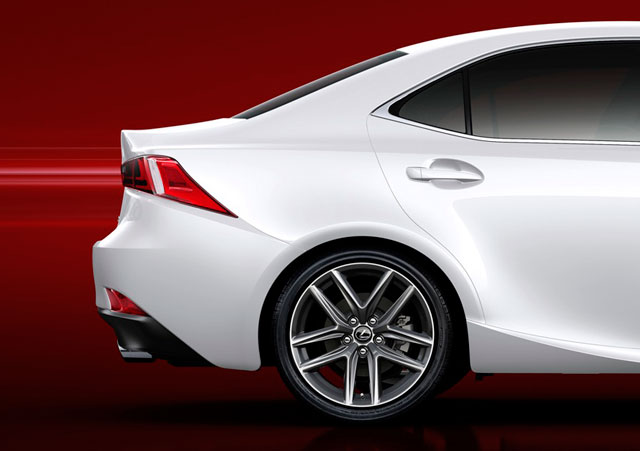 In another LFA-inspired design cue, the wheel design is a dead ringer for the supercar rims.

Wrapping up the exterior, the rear of the car is a sportier interpretation of the GS: 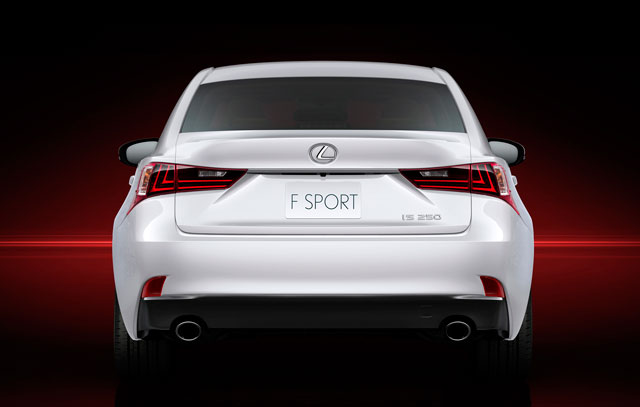 There are elements of the LS & GS all through the rear, but the devil-horn rear reflectors makes for a great detail: 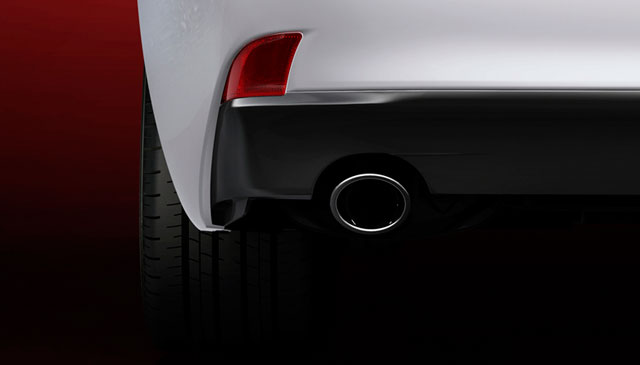 As with any new vehicle, I’m going to reserve judgment until I see the new IS in real life. Overall, I’m impressed by Lexus’ decision to take some chances with the exterior design, and by how closely the IS resembles the LF-CC concept AND the LFA.

Good start but where is the IS-F coupe??

More like RC-F as the IS will only be a sedan, and coupe will be named RC.
I would like that with a big V8.  I certainly am not a fan of the F-Sport line.  Lexus needs a car that can compete with the Mercedes M3!

I am so impressed by this car. Can't wait to see it live (March 2013 @ Geneva). It must look 10 times better live. The LF-LC was KILLER when I saw it live.
Surprised there doesn't seem to be an 18" wheel on the F-Sport BD
The headlamps appear to be LED. I wonder if they are for both main and dipped beams? I do not see the supplemental halogen high beam lamp. It is a shame that they did not conceal the drivers side door lock cylinder like my 2010 IS. Where is the sunglass holder in the interior pics? It should be forward of the moonroof/map light buttons. Glad to see the car is larger in almost every dimension inside and out.
I loved Ultrasonic Blue Mica when it first came out as an exclusive color on the IS-F & I still do,but I'm half wondering if this White Nova color,a tribute to the LFA,should be the new hallmark color on ALL F-Sport Lexus models.As excited as I am to see the new IS in black,I'm really "digging" this White Nova on the IS F-Sport...especially with the Dark Rose interior as it looks very JDM.White is also Japan`s official racing color for car exteriors.
I like the shortened side profile of the LF-CC concept taillights compared to this new IS which it seems to droop down too far. Maybe it'll look better in person! Other than that, kuddos for sticking so closely to the concept! Excellent job Lexus!

I have to admit,that is a design element that could have gone very wrong,(the taper where the rear valance connects to the rear fender) but Lexus did it very,very well.They always have been famous for exceptional build quality & tight fitting body pieces.

The yen has depreciated 10% since October. If that keeps up, Lexus pricing will become very competitive.

Ok I think this is overall worse than the last gen, front is ok..but weird, interior is lovely and that's about it.  I was excited for this car, now not as much lol. I'll pass. But who knows, maybe it'll grow on me.
What's wrong with the headlight curving (between the LED and the headlight?) The headlight housings seems similar to the Acura RSX, but Lexus could have straighten out the lower portion instead curving it.
This is following a great design in the current IS.  The current car is as attractive as you'll find south of $40k BD
A+ drooling.... Only nit pick is side rear resembles the conservative Acura TSX.
other live photos http://es.autoblog.com/photos/lexus-is350-en-vivo/5554724/full/ ciao Claudio Italy
I've been looking at this all day...and I like it! Not sure about the headlamp curves - think I'd have preferred sleek and slim rather than a little fussy however I think they will grow on me.  Think it could take a bigger wheel (maybe 19"?).  Interior is brilliant.  It simply oozes quality.  The whole design looks modern and premium.  On the road I think 2014 IS will make everything else seem old.  Can't wait to see it in New Zealand in a few months.
My interpretation of what it should have been.

Your interpretation looks horrible. And you probably made it in Paint.
You seem like a jerk.
Must say I agree. Lower front looks like the standard version (not F Sport) - it more classy and clean lined while the spindle grill retains the F Sport mesh. As for the headlights I seem to prefer the original, curvasious version. PS: Thinking about the F Sport version; is there no fog lights or are they hidden somewhere?

I think that the coupe is just that a coupe version of the IS, would love to see a IS F coupe, that would be hot, can not by the profile see any difference between them, other then the rear doors and rear roof line, can't see how you could sell it as anything else the the IS coupe, which is over due. Over all the cosmetic changes are minor to the current model, dislike the two open drink holders in the centre console being opened, prefer the current setup, not that I ever eat or drink in the car anyway. I find the front end aggressive and the use of running contour lines tie the car design together well, most of these lines exist on the current model and here are just a little  deeper. So the platform is slightly bigger and the instrument gauges are digital, but i prefer the current position of the navigation display, the dash console and air vents is looking to much like a interior of a BMW, which I have never found appealing. I some respects the interior dash is a step backwards to the eighties, excluding the digital read out display
The LF-CC has perfect proportions and a gorgeous interior.  I really wish Lexus would have merely stuck even closer to its design that was widely hailed - especially the front end headlights/grille and the rear light design.  The headlights on this new IS F Sport look like a mask and where are those three projector beams??  Appears like a missed opportunity but I too will reserve final judgement until the Auto Show arrives in town next month.

I agree! Fix these detaljs like LF-CC, and i will buy. In some angle from the front it looks ugly. If they correct this will be a success, if not i think it flops. The solution are there, very close. LF-CC.
agreed - I have to say - the more I look the photos - the less I like it - there are too many holes (literally) on the outside and clashing angles on the inside. Yes it's new and swanky - but it's ripe for violation by pimpsters! Also - I think the spindle grille is going to date badly generally and especially on this IS. There is little room for flexibility with that grille. Overall - very disappointing and I agree - it's an opportunity missed unless we see big changes in Detroit ... here's to hoping!

The front organic looking headlight design resembles the Infiniti FX's
I am dissapointed that Lexus has not even attempted to take the  LF-CC or LF- LC or the new IS to Nurburgring Nordschleife for testing like how thier did for the LFA before it was part of the GAzoo Racing Team and the 24hour Nurburgring race.

Disguised IS's have been cruising the 'Ring plenty in the past year. For example, a IS convertible bearing GS suspension, and IS-F exhaust has been seen. Interesting point as I look at this picture, look at the two cutouts made in the front bumper beside lower grill. These probably turned into the two air vents we see next to lower portion of spindle grill in this new IS. The suspension has made its way into the new IS. This also leads me to believe that a RC-F is in the works and still being tested.

The grille sucks and this design is mediocre at best. Guess my dream of buying an IS has died.

This design led me straight to my Lexus dealership--where I bought the 2012 IS350 on Saturday. To each his own, but the styling is just too polarizing for me. The LCD gauges are cool, though.