Carsguide Drives the 2014 Lexus IS Prototype

Paul Gover from Carsguide also had a test drive in the the next-generation Lexus IS prototype:

The IS250 is immediately quieter than I remember – Furuyama confirms big cuts to wind and road noise – and the eight-speed auto is great. As the road turns twisty the IS responds in the way I used to expect from a BMW. It responds eagerly to the wheel and drives confidently through turns.

The IS350 is not as precise – with an extra 30 kilograms in the nose – but the extra punch makes any short straight a fun run. I also enjoy the LF-A-style instruments and the multi-mode automatic, which responds almost like a manual in the sportiest setting.

So I’m convinced. These are real driving cars for people who take their motoring seriously, but they also have the sort of practical improvements that are essential for the long-flawed IS. 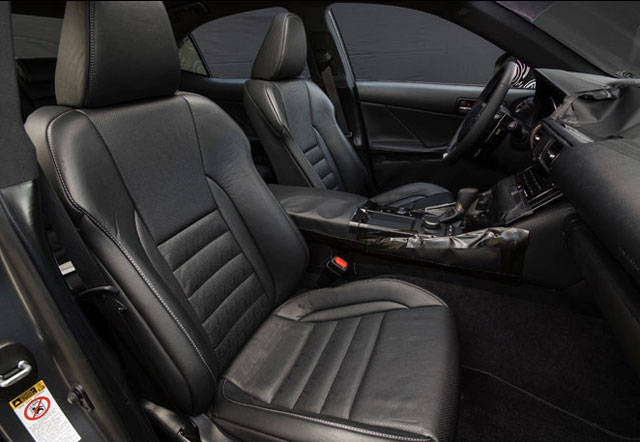 The cabin space is a huge improvement with better-shaped front seats. The wheelbase is out by 75 millimetres but there is 90 more in the back-seat space, and even the door opening has been enlarged for easier access. The view from the back bench is also helped by front seats that are set 20 millimetres lower, although that was done to improve comfort in the front. Oh, and the boot is about 20 per cent larger.

There’s a video included with the review, but I was unable to get it working — more next-generation IS reviews on the way.

Read the Carsguide Review of the 2014 IS Prototype

The perforations in the leather are little Lexus L's. Neat little details
Another glowing report..... BD

Yeah I agree... But the interior feels too sporty the new IS. The current one with wood grain and the light biege coloured upholstery and semi-aniline leather is more luxury and has a 'plush' feeling to it.. Now it's more of a CT200 mixed with the 3 series interior. For god sake I hope this new IS can at least compete as the IS fails to compete with the segment!

Video works fine in Chrome on Windows 7. The instrument panel looks incredible! Can't wait until January 15th.
http://www.caranddriver.com/news/2014-lexus-is-sedan-prototype-drive-review Car and Driver's prototype first drive is up.  They imply with the GS Platform change comes extra weight.  And no hybrid is expected...... BD

I thought it would be lighter , according to this article , the whole car seems to be larger ... or maybe just a longer wheelbase with better packaging .

those are the ugliest seats I have seen in a while...
https://www.youtube.com/watch?v=hHtiLNJdDag Love it!

That's a good video too !

I've notice something , according to the quote of their review , it seems like the LFA-style instrument panel is only available on IS350 but not IS250 ?

I've seen pics of the LFA-style instrument panel on IS300h F-Sport model as well.
Why you confirm that is F-Sport model ? It's nice to see it's on Hybrid too , because Hybrid needed those fancy gauge to suit it's technology !
The rest of the pics had F-Sport logo on steering wheel. From pic in same set, you can see the instrument cluster showing Charge, Eco, Pwr, and there is also an EV button below mode selector.
For those who want to see the full set of interior pictures http://my.is/forums/f235/3rd-gen-interior-447376/#post6666135