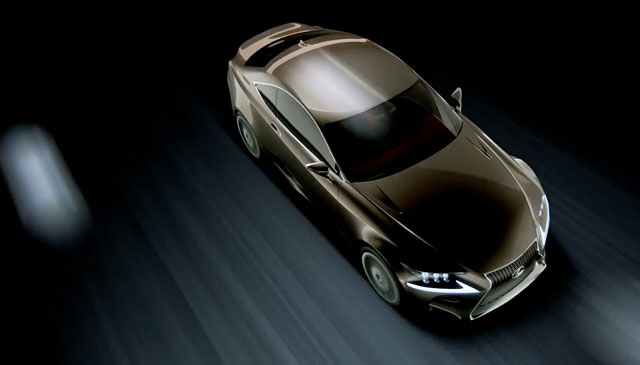 A second video of the Lexus LF-CC coupe concept has been released, and it’s amazing — drop everything and watch this:

There’s a lot of visual information packed into this two minute video — for reference, I went through frame-by-frame for some screenshots:

It only takes a little imagination to see how the LF-CC could transform into an IS coupe — in fact, I wouldn’t be surprised if this concept was based off the next-generation IS production model, rather than the other way around.

I think you're right, more like this is a concept BASED on next IS. I also think there is a surprising amount that will transfer to actual model.. We've only got to wait til January and the Detroit show to see new IS in actual design anyway, we can then hope they add this coupe to the line up very soon afterwards :)

Precisely, as the look of the IS XE30 line-up was decided way before this concept came to fruition and it shows greatly. Is it possible the LF-LC is also (secretly)based on an upcoming production model?
I wonder if Theophilus Chin will make a Photochop of the production IS. His last GS was dead on.
It's pretty much been made already. The car doesn't look 100% like this, but it's very similar. This was first shown in November 2011 and judging by this production IS inspired concept car and the spy shots, this is as close as one will get.
I hope it looks nothing like that if not Toyota might get a call from Nissan.

Sorry dude, front end gotta stay!
It's gonna be toned down to production level and it will lose a lot of the parts I like.

I know the integrated shark fin/tail light probably doesn't meet standards, but it'd be a really nice touch if that it made to production.
Not necessarily. There are no rules preventing them from using the fin for braking lights. Actually, that would definitely set them apart, design-wise and give other drivers a better indication that the car is braking than installing it on the spoiler or rear window.

The grille is too dynamite, so I don't expect it to make production....... BD
Loving the LFA style dials. The production has to look something like this concept.
SEDAN PLEASE CAUSE PEOPLE WILL MOST LIKELY BUY SEDAN THAN COUPE FOR CONVINENCE

I'm sure the idea was to announce that the next-generation will also be available as a coupe, not that it will be a coupe only.

Car looks great, really great! BUT: Should have been a wagon. Would have bought one as our next car. But a coupe has absolutely no everyday-value for a young family.

As for most people.

Please offer it with a MANUAL TRANSMISSION.  Some of us still prefer stick shift to lame automatics.

Question is: Do you actually buy new cars, or are you just a dreaming "enthusiast"?

Actually, I think the IS is based off a concept. Not this one, probably an earlier version which had 4 doors. What they did then was make a sporty coupe version of that concept. I doubt that Lexus would start building a car on the fly and then base a concept of a production model. It's no longer a concept. The interior, however, is way too hi-tech for an IS, or even a production car, so that can definitely be crossed out but it does show that it will be touch screen which means that the IS may remain a touch screen car and not the same as the GS. Only time will tell though.

That's pretty much true and spot on, here's a like. In terms of the design process, there are a different stages. You have a design theme in place(compact, sporty expression of L-finesse with a spindle grille), then comes concept approval in choosing a definitive exterior design(headlight/taillight shape, no door handles). Afterward, you then have the "design program approval" when the more detailed production design is frozen and is identical to what will be sold. Your first statement is very reflective of the concept approval stage, being before the car is "watered-down" to detailed production specifications. I feel too many people are getting confused and are assuming the 3IS is based on this LF-CC, which it is not as it would be the other way around. The 3IS definitely around 1 1/2 to over 2 years ago was originally a four door concept that was designed and engineered into production specification sometime last year. A good example of this would be the E60 5-Series in 2000 vs. the actual production car in 2003.

Where has the video gone? When I click it on, a message appears saying it has been removed "by the user".

The original uploader has removed the video -- however, Lexus Poland also uploaded it, so I've updated the post with the new source.