Is Lexus Planning a City Car?

Japanese magazine Mag-X reports that Lexus is working on a city car based on the Prius C — anything’s possible, I suppose, but looking back at recent quotes from Lexus executives, it seems unlikely in the near future.

Lexus has just one car below the $30,000 mark, the pint-sized CT 200h hybrid, and it sells well enough. But the automaker wants none of the near-luxury pie, said Brian Smith, marketing vice president.

“I don’t think [entry-luxury] is a focus of ours right now,” Smith said. “Other manufacturers have a reason for going there. Some might be customer demand; some might be government regulation” — a reference to the federal government’s corporate average fuel economy program.

“Unfortunately in the U.S. right now, there’s not a lot of consumer demand for really small cars,” Templin said.

Of course, it’s worth noting that both these quotes relate specifically to the U.S. market, a region where the luxury sub-compact segment is quite small. An argument could be made for a Lexus city car in Europe — it would certainly boost sales and create more brand awareness, though it’s questionable if moving downmarket would be positive for Lexus in the long term.

Regardless, even if the Lexus strategy has changed and a city car has been approved, releasing a vehicle that looks anything like this Theophilus Chin rendering would cause catastrophic brand damage: 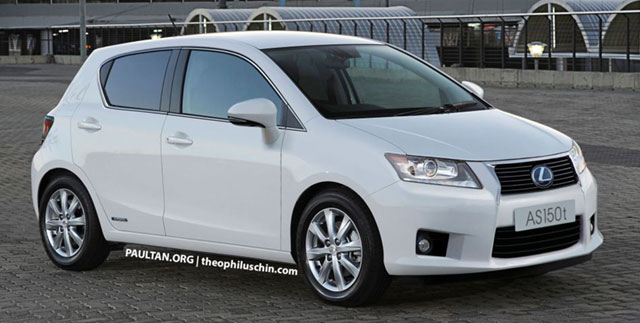 Also, there’s no way Lexus uses AS for the name.

If it does come out. Hopefully it just stays in Europe and Asia.
Agreed.
Lexus did at one point say that they wouldn't make a vehicle below the IS,yet now we have the terrific CT. The market changed,and it will in the future,in some way or another so one never knows.
Lol the rear look like yaris
The CT is already criticized as the slowest car in the competition. Instead of focusing on new cars they should really focus on new engines.Lexus/Toyota is nearly a decade behind its competition on engine tech.

Can you specify that?
I'm not sure what he means, but I do notice that Infiniti has had a 3.7 liter engine producing 328hp and Cadillac has a 3.6 that puts out 321.  Lexus has been running the 3.5 for a long time now and the IS gets 306 hp.
If somebody is behind the competition, it is Infiniti with the named 3.7l and an average inner city consumption of 15.3l/100km. (G37 Coupe) This is only 0.5l less than a 500hp Porsche Cayenne demands. The Lexus IS350 isn't modest too with 12.4l/100km, but definitely better. Of course, there are, especially from european manufacturers, engines that still do way better. (The Cadillac engine is similar thirsty with 13.1l/100km) So, maybe that does not affect some US customers that much, but, e.g. in my case, this would be pretty annoying since I have to pay 7.76$ per gallon (~1.65€/l). And gas prices in Japan are also not as cheap as in the US. Maybe the other engines got a little more power, but gaining it at a price, many people in the world are not willing to pay. BTW.: The rendering is a nice slightly changed Yaris...

Well first of all it would be called AT150 not AS150T because the 'S' like ES GS LS IS kind of represents sedans and the 'T' like the CT represents hatchbacks.

That's exactly what I thought -- can't see Lexus EVER releasing a sub-compact sedan, only a hatch.

Don't make this car, Lexus... Please...
Some Daihatsu looks way better than this. If they can actually pull off a design that is loved by the Europeans. Then build it, but only sell in the euro/asia market.
It's not aprils fools day, is it...
Bad idea... cheapening the brand.
Driving the NX 450h+