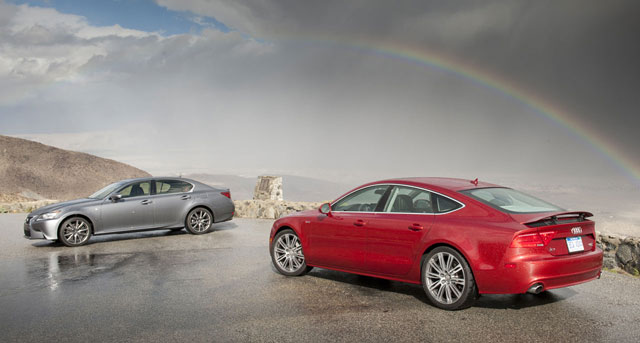 Road & Track has published a comparison between the Lexus GS 350 F Sport and the Audi A7 3.0 TFSI Quattro:

Romping through some uphill bends, the Lexus feels fleet and certainly has a handling edge on its heavier Quattro-equipped competitor whose natural propensity is to understeer at turn-in. But as it literally starts to rain on our parade, the advantage skews heavily the other way. Kim notes, “The GS’ high-tech suspension may be too sophisticated for its own good.”

The F Sport does shine over the A7 in lateral support, thanks to 16-way adjustable form-fitting bucket seats. These easily qualify as the best factory seats available today.

On a purely emotional front, it’s the F Sport that gets our attention, as it’s the car both Kim and I are most excited to drive at the end of the day. But for now, our hats go off to the Audi A7.

While the A7 is eventually named the better of the two cars, it’s by the slimmest of margins — in the end, the GS F Sport finished with 380.6, just 6.7 points behind the A7 and its 387.3 final score. Going by the points breakdown, the difference is all in the performance — the Audi’s supercharged 3.0-liter V-6 ends up being the deciding factor.

Here’s the accompanying video that summarizes the review in under four minutes:

Of course, all this ignores the obvious comment — these two cars don’t really line up as true competitors, and when price is figured into the Road & Track equation, the A7 tops the GS 350 F Sport by just 1.6 points.

Should have been the A6. The GS is just nailing the driving dynamics competition. The Germans must be worried by now. [+]
The GS has better driving handling than the Audi A7. Great numbers,
You know the 4GS is beating it's in class competition when it's being compared to a car that's a little higher in the ranks.
1.  I personally have a problem with them comparing a $52k base price car with a $59k base price car 2.  These are not direct competitors (Never seen a E350 compared to a A7) 3.  Still waiting for a 535i Sport to go against the GS F-Sport.  Looks like mags don't want to see a fair fight on that. 4.  A7 sells exactly 500 cars a month, a niche product.  A hatchback?  Really? 5.  The huge difference in price is only worth 5 point to R&T?  In the real world, prices that different are driving people from Audi dealerships.... BD

Great points: 3. Find this hilarious as well -- why no comparisons with the 5-series or E Class yet? We've only seen the GS against Audi so far. 5. Was going to point this out, but didn't want to get too confusing. I think the near $7k difference in price is worth more to the overall ranking than 4.1 points.
Motortrend (if I'm not mistaken) reviewed E350 Sport, 535i M Sport and GS350 F Sport and the GS was named the best car.
It was a set of track test, with MT as an observer.   They won't put that in their magazine..... BD
You're correct, there was a Automobile/Motor Trend test of those three models, but it was sponsored by Lexus and included in the magazine as an advertisement: http://lexusenthusiast.com/2012/02/21/lexus-gs-challenges-bmw-535i-mercedes-e350-sport/ While I don't doubt the numbers from this test, that's all this was -- statistics. I'd like to see the GS compared to the 5-Series & E-Class in a real comparison, even if I can already guess the results: 1. BMW 2. Lexus 3. Mercedes Rinse and repeat.

A6 3.0 TFSI should have been paired with the GS350 F-sport. with real world comparisons.. where it matters.. not just stats.. although i have to say here in S.E.Asia i dont know why the GF350 fsport wheels are only 18" and not the standard 19" ones..apart from that am super excited to take delivery of the GS soon. YaY :))
Omg Road & Track is retarded as hell. #smh
Have they even compared this to a CLS or the new 6 series grancoupe yet? Also, maybe Lexus shouldn't have went with the cheaper option (older engine) and put in some real power in the GS to compete better, even though it doesn't really need it, but a "complete" overhaul was maybe necessary..? It seems the mags, and most internet (ignorant) commenters are still playing the "numbers" game, giving more credence to a few tenths of seconds on a clock, which isnt even a half a breath in real life. That is the difference between a 6 second car and a 5 second 0 to 60 car, get it, about a breath. Nothing.  Want to try and guess what the difference between a 6 sec car and a 4 sec car is, for the mentally challenged? So to play the numbers game with today's current crop of cars is pointless, but they are still doing it, to win their little ego points, when the glaring obvious truths exist. This is what the magazines and biased internet blogs and bloggers are doing now to disqualify great cars.  Also, the price "issue" like with the LFA and now the recent Scion FR-S/BRZ. AND or with subjective bs like with looks. They mostly only do this with Lexus and Toyota cars, glaring over obvious weaknesses in other big brands. Real drivers look at who's LIGHTER, and overall the better driver, not fat overweight, dead-electrical steering, computer nannying pigs, that are the current crop of most so called "sports cars" today. Lexus, learn your lesson with this and take the GS-F properly. Please give it the horsepower and torque NUMBERS, or STATS that will compete, as well as the fun to drive package that we know you can do now. Don't make it too bloated or racy, but dignified and powerful, while a bit aggressive.... Keep the weight down and what ever engine you use, please try to make sure it has the most linear throttle response possible, as close to NA as possible. Then you will solidify your position, as well as drop that/those deadly coupe(s). Please!  Don't go soft on us. And worry about these fake, partially biased reviews or reviewers, just don't give them ammo. Keep up the good work, out.

Lol I meant don't worry about the fakes lol....
Excellent comment, thanks for sharing.
Brilliant Comment hope really LEXUS hear you and give us the GS-F with the pure 4.8 LFA V10 engine to share it's cost among the line up and to teach the German Specially BMW which drops it's amazing V10 to that new turbo V8 one
I hear you on that. Maybe that's why the Lexus lost against this Audi by a small 1.6 points. These reviewers don't want to admit the Lexus was better despite the numerous advantages they write in their review about Lexus.

Interesting that no mag has had a problem getting the 328i up against it's competition right away, but the GS gets set up in these must-lose matchups, either without the same equipment (A6), or against much more expensive cars where it's lower price isn't factored in correctly (A7) Looks like some places know how it would end, and don't want that to be the final chapter in this class, as no other redesigns are scheduled for quite some time...... BD
Bullshit the GS does 0-60 in 6 seconds.. If that's the case then you have serious problems with your engine or drivetrain.. or the petrol you've used.. More like 4.6-5.2 seconds The 2GR-FSE (GS350 engine) is an incredibly powerful motor.. The V6 Camry can do 0-60 in 6 seconds.. I've done it in 5.6 seconds with rh 2GR-FE engine (V6 Camry)

I don't see anywhere in the R&T test that says the GS did 0-60 in 6.0 seconds -- here's a link to the PDF with all the technical data: http://www.roadandtrack.com/var/ezflow_site/storage_RT_NEW/storage/original/application/f8e8d0afaf9941a5e3cff35b3336e3f0.pdf

Test driving a car for a day, a week or perhaps for a month is one thing however vehicle ownership particuarly over the extended term often brings about different experiences. Historically ... Audi as with it's parent company VW are not regarded as manufactuering the most reliable / dependable vehicles on the market which is a vast contrast to the solid reputation Lexus has established.