Shamiz, our source for Japanese magazine rumors, has come through again with these Best Car renderings of four possible next-generation IS variants: 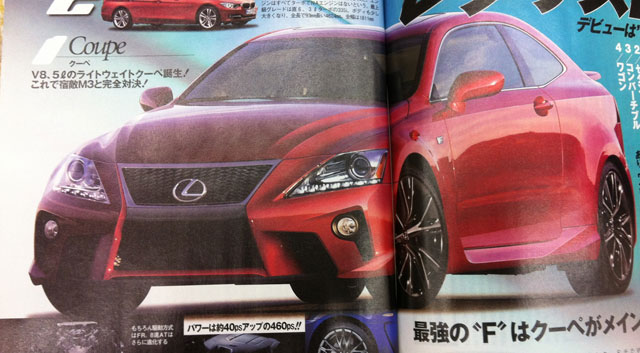 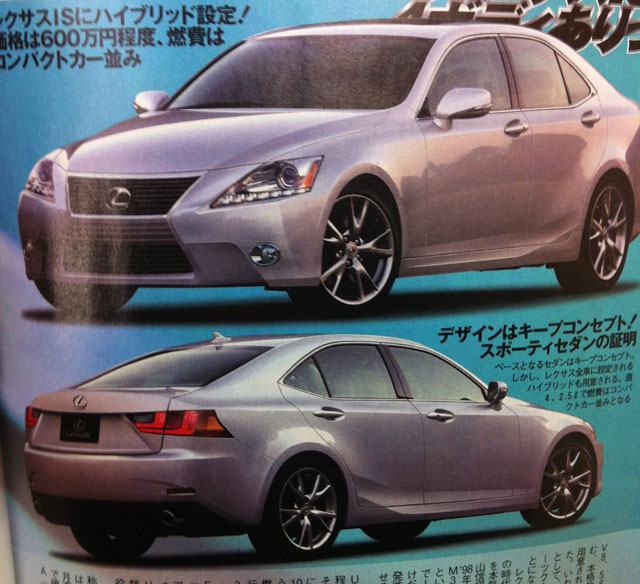 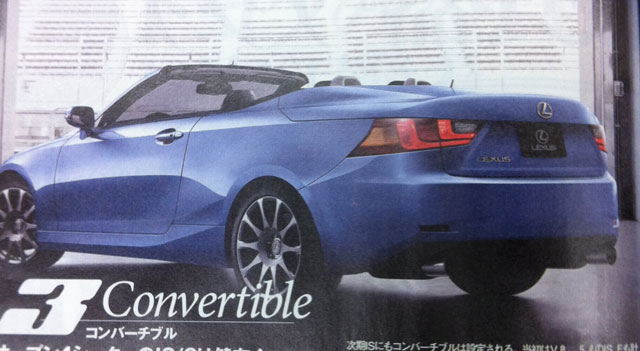 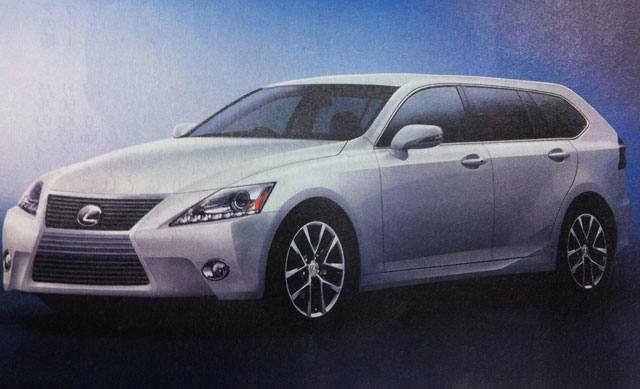 With the exception of the IS wagon (which is just hideous), these photochops have some mixture of good and bad elements, with the bad mostly winning out — every single rendering has an awkward C-pillar and an oddly exaggerated front face. That said, I do think the new spindle grille will fit the IS range well, and I look forward to seeing something a little closer to the real thing than these mockups.

Even the included spec sheet has its share of ugly: 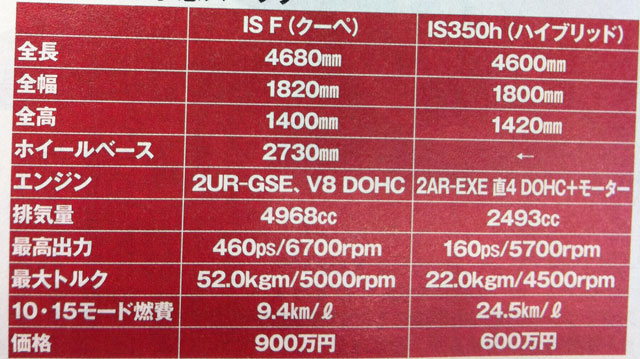 Leaving the IS F engine untouched is one thing, but Lexus putting out a IS 350h with a four-cylinder engine producing only 160 PS/158 HP? Even with the added electic motor boost, I just don’t see it — at least with the 350h designation.

Regardless of ridiculousness, here are all four pages in high resolution for your enjoyment:

Ugly, hideous, retrograde.... all correct, I hope the new IS will never look like any of these! I hope that lexus consider the existing market of drivers ...those who want exclusivity, sports, but some refined ...not a boy racer's wet "fast and the furious" dream! think the smooth and powerful lines of the Jag, Aston Martin and the existing IS ... then take it from there. The danger with trying to be "radical" is that you end up with a genetic mutant from hell!

Haha, that's being generous. I struggled to stay polite. >-(

Post updated for clarity.
haha~ i hope its accurate cuz it'll make me love my 07 even more :D
IMO, all three look H-O-R-R-I-D.
No, please... I can't accept it if that is going to be real..
I don't like them either. If the new IS does look like those, I'm sure glad I got my 2011 IS while I was able to!!
I hate these hideous photochops from these Japanese magazines, they're worse than the pics I drew in gr1 using paint on windows 95.
BTW, the current car looks GREAT! Aged very well.   I don't expect major changes Drove the 350 when it came out HELLA fast, but the interior is small.  Smaller than a Corolla Needs a bigger back seat, and stick on the 3.5 BD
omg butt ugly.
Here's Theophilus Chin's idea of a micro Lexus.
All these chops are off of existing cars on the market. The IS coupe clearly has the new tC C-pillar, the next gen GS grille and the current IS headlights. The IS sedan has a mix of the first gen IS rear end and the current IS front end. The IS wagon just doesn't look right. I can't quite put my fingers on it... As far as the hybrid spec, The Camry with the 2AR-FSE makes more power than what is listed on their spec sheet. Plus a typo with the engine code. 350h, psh, yeah right, I would say it's an IS250h.

Hybrid IS will be IS250h.  Will be introduced at the same time and with the same drive train as the GS250h.  Both 4 cylinder 2.5litre engine developed from 2012 Camry hybrid.

When is the next gen IS supposed to go on sale?  Next fall?

Great@!)
LOOOOOOOOOOOOOOOOOOOL AHAHHAHAHAHHAHAHAH!!! As always, I wonder why these people even get paid!
I kinda like the back of it, would accept something similar. The other angles....f**k ugly.
Whether or not it would look like the picture, I happen to think the sportwagon is a damn good idea.  Reminds me of the classic Volvo P18000—which all the Volvo guys I know want to see come back.  Be much better if made by Lexus.
Uhmm no, i highly doubt Lexus will make an uglier successor.. But mind you, the current GEN IS looks very nice, especially the face lifted model from 09 onward..
yuk
ewww. On another note.. the next GEN lexus ISF send chills down my spine.....
Not a fan... however i do appreciate the two body lines between the rear door and the rear wheel well. VERY cool!! and the ISF hood is AWESOME!!!!!!
幹!LEXUS敢出這麼醜IS一定沒有人要買，叫設計師去死 狗屎......我隨便畫一台車都比它好看
幹!LEXUS敢出這麼醜IS一定沒有人要買，叫設計師去死 狗屎......我隨便畫一台車都比它好看
叫設計師出來我一定開IS250撞死他
這才是LEXUS IS http://www.facebook.com/media/set/?set=a.258750537478400.61057.100000303673892&type=3#!/photo.php?fbid=334834643203322&set=a.258750537478400.61057.100000303673892&type=3&theater
不要開這種玩笑，不好笑，是誰設計出這麼醜陋的 LEXUS IS ，這種車只會破壞 LEXUS 和 IS 的形象...我很不希望看到這麼醜陋的 IS 在展示間和路上跑，如真的出這種造型的 IS 我會再台灣發起拒買 IS 的活動，讓 LEXUS 高官知道這款 IS 是有多麼醜，簡直是失敗品，我希望 LEXUS 不要再開玩笑了拿出真正的 LEXUS IS 我期待。
This looks so strongly similar to the prototype sedans that it's scary. Someone in Japan saw the car and made themselves a drawing.