So while I was out relaxing at the beach with the family, the Internet blew up with new spy shots of the next-generation GS — let’s take a look at a couple of the images, starting with the front:

Judging by the mesh grille, I’d say we’re looking at the F Sport trim level — have to say, I’m surprised by how much of the LF-Gh has been carried over. The front grille is a touch smaller than the concept’s, but it’s very true to form. One thing: I’m not really a fan of the side mirrors, though they do have a bolted-on look so there many be no need for concern.

The headlights are difficult to read — I don’t know what to make of the dotted LEDs, but I’ll hold off judgment until I see them without camo. 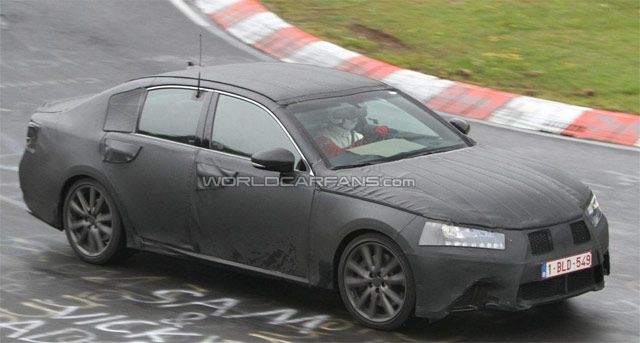 If I had to guess, I would say those are 19″ wheels — which would continue to suggest we’re looking at the F Sport model. Beyond that, Lexus has done an excellent job in hiding most everything else from the side profile, so let’s move on to the rear: 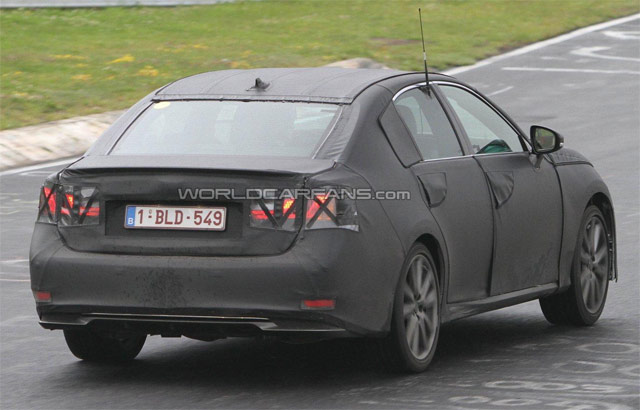 It’s difficult to say for sure, but it looks like a rear diffuser between the integrated exhausts — the Lexus camo hides most everything else, including the rear lights.

Perhaps the biggest photo of them all is this grainy image of the interior, though it really doesn’t show all that much: 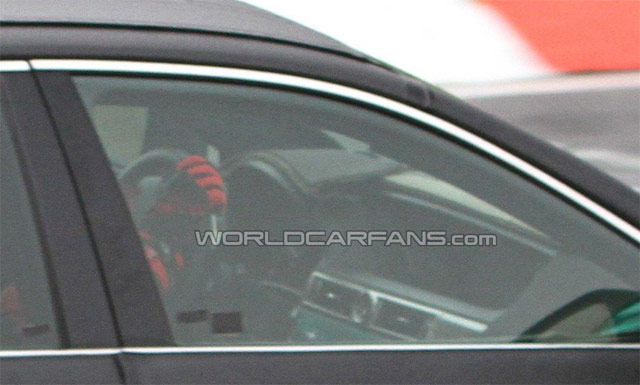 At first, I thought we might be seeing a leather trimmed dash as well, but it’s starting to look like camouflage the more I look at it — regardless, the navigation slope in the center console looks similar to the current RX design. It would also appear the analog clock seen in the LF-Gh concept is making it to production — which is a nice move by Lexus to get away from their old-school digital clock.

I really recommend checking the full-size images over at World Car Fans, and be sure to share anything you notice in the comments.

(Thanks to everyone that sent this in!)

I'm actually not a fan of the analog clock. Not even when it's traditional, like on the Porsche. ;)
I like it!!!
Finally a Analog Clock ! Lexus had been use a old-school Digital Clock for over 20 years ... my '89 Corolla have the same Color & Shape of clock in a '11 RX , it's bit outdated but to be honest that clock seems like never died . Back to the total design ... the whole shape of this prototype is same as the one that appear in concept , the LF-Gh . Taillights is now very concept-ish & also the headlights , seems like Lexus is going into a new direction !
The Lexus digital clock looks pretty good for some interesting reason, but this is a nice change. I think the car with the best looking side mirrors is the IS. btw, Krew... were you in a rush to publish this blog post? lol

I can't deny it -- I motored through this post! I need to take a closer look at these images, see if I spot anything new.
If you look closely the IS, ES & LS have similar shaped side mirrors...
I'm very happy with the fact that Lexus bothered to shrink the bulky side mirrors of the ES before its facelift. It used to look so out of place!

The Lexus digital clock looks pretty good for some interesting reason, but this is a nice change. I think the car with the best looking side mirrors is the IS. btw, Krew... were you in a rush to publish this blog post? lol
Dotted LED's. I hate it!
The LEDs on the headlights have a masking over them with pre-cut holes. Im almost 100% sure they will look just like the CT and IS LEDs

aha yeah! That's what I was thinking! There's probably just more camo under the camo!
Good observation about the masking over the LED.... I thought it was dot led's also
Good eye -- that would make sense to me, it seemed strange that Lexus would change from the design seen with the IS/LS/CT.
"...the design seen with the IS/LS/CT" ...which IMO is quite hideous, Lexus does some of the worst LED lights in the business. Best has to be S-class & XJ I think. I still don't understand why the facelifted LS didn't get LED indicators?!
I think it did aha

The taillights at the back have carried a similar style as seen in the concept. The 'L-shape' is retained. http://www.caradvice.com.au/wp-content/uploads/2011/07/Lexus-GS-3.jpg Check it out
mmmmmmm I dont think this is the GS-F. The ride is a bit too high to be the F model... and the brakes dont give sign of a large motor as in case the ISF has performance brakes. But wassup with no exhaust ??? I don't dig must be the hybrid model the rear bumper reminds me of the CT.
Also if this was really the F model... you would be able to see the indentation of the F badge even if it was covered.

I don't think it's the GS F, but rather just the F Sport package, similar to the one available on the IS.
With the LF-Gh concept, a mesh grille was featured as well, and that was supposed to be a 'hybrid'

Now I'm really starting to like this car.. It will finally truly compete with the 5 series..
I have very similar photos that I took myself, but not as clear as this one. I'll have to post this up, thanks!
That looks interesting... would like to see the photos Krew took of the interior & I'm surprised he didn't mention anything about having seen the interior at the NY show..
My photos weren't nearly as clear -- I kept expecting better photos to show up online, but it never happened. Missed these Autospies images, though.
Too bad. Lexus slipped when they left the production interior exposed in the LF-Gh concept at NY & then camo'd it at the Nurburgring. Anyway I think Krew may need to start a new thread for those interior images as there seems to be a lot to discuss...
Your wish is my command. ;-) http://lexusenthusiast.com/2011/07/18/is-this-the-next-generation-lexus-gs-interior/

Just hurry up & give it to us already!!!This feels the same as waiting for Toyota to give us a Supra,but remember,we did get one better with the LFA!

Admittedly, waiting for the LFA was way worse than this. ;-)

BTW,I'm loving my desk top wallpaper of Gazoo Racing's # 88 LFA from the nurburgring 24h race in June.Thank you 'krew' for the amazing high res. pics. from flickr & suggesting to use it as a wallpaper.I admire it every day!!!

That's great -- I have another LFA wallpaper set up for tomorrow, hope you like it!

I miss them as well, but suppose because the first-gen GS didn't have them, it's ok.

Hate to be a dissenter, but the hooded controls, beneath the clock, I'm not feelin' Looks very German.  I want more Lexus and less BMW on the inside I miss the original LS controls on a single plane, very elegant.I'm getting MR2 Spyder flashbacks!BD
Looks like it has run flat tires (?) in the second photo. Very clever camo done by Lexus, the "dotted" LED look seems to be round cut outs in additional camo behind the clear plastic headlight covers.  Analogue clocks are well & good in your house but digital ones are easier to read at a glance especially while on the move, also helps when your passenger (annoyingly) asks the time even though the clock is right smack in their face. The Jag XJ has a digital clock in the instruments in addition to the analogue one, Lexus should do the same.

Not only that, I hope the GS gets the Multi-info display in the speedo like MB's or HUD