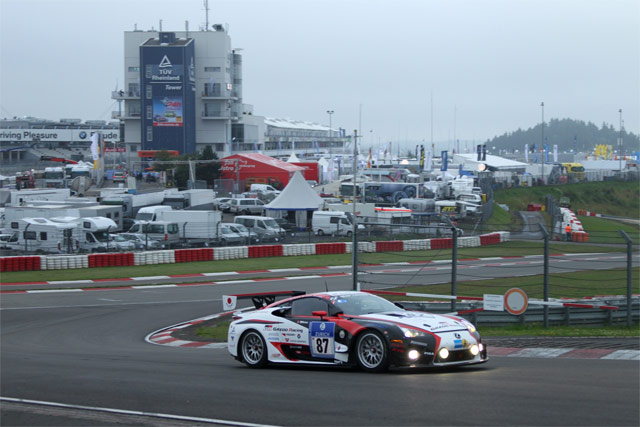 From the start, the #87 LFA struggled to keep its pace from the qualifying rounds, falling to 46th place before an engine fire took the car (and drivers Takayuki Kinoshita, Andre Lotterer & Juichi Wakisaka) out of the race for over ten hours.

The dedicated Gazoo team didn’t quit though, managing to make the necessary repairs and returning to the track. Final result: 83 laps, 151st overall, and 8th in the SP8 class. 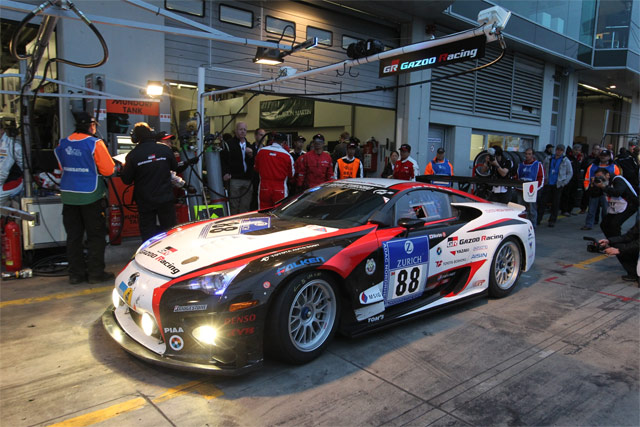 The #88 LFA, with its team of Akira Iida, Hiroaki Ishiura & Kazuya Oshima, fared much better — at one point climbing to 20th overall — until a collision in the pit lane and two hours of repairs derailed any hope of a top twenty finish. Final result: 133 laps, 42nd overall, and 3rd in SP8 class.

While it would be easy to curse bad luck, that’s what makes endurance racing so difficult, and especially this race — there’s a lot of time for things to go wrong. That both LFAs suffered serious damage and both finished the race is something to be proud of — congratulations to everyone on both Gazoo Racing teams for your perseverance and dedication!

(Be sure to check out Lexus Europe’s coverage from the race as well — plenty of great pictures to go through.)

I'm really not happy on whatever happens this years ... :(

It was a tough race, that's for sure -- but it's all experience for next year! :-)
They was quite good in last year , so I was expected the same happens ...

I really think the LFA should´ve won a special award for being the best-looking car in the race. ;-)
really no comment can describe how much am sad
With japanese drivers the result is very good!!!! They only know drifting!!!!
I wasn't able to stay with them through Lexus Europe's twitter updates all night, but I was cheering for them all the way! How come Gazoo Racing didn't have the chatterbox they had last year with all the ranking data right next to it? Anyways, congratulations to GR for such an amazing feat! The LFA is one heck of a car without a doubt! I hope that Lexus stands by this for years to come!
The car that violated the rule and kept speeding when the yellow flag going up and rear ended the LFA should be severely penalized and also should be sanctioned.

Was there an IS-F in the event and, if so, how did it do?

It was only the two LFAs from Gazoo Racing -- I don't know about any independents.