Japan’s Best Motoring series may have been cancelled, but not before putting together a superstar supercar comparison featuring the Lexus LFA, Nissan GT-R, Porsche GT2 RS, Corvette ZR1 & Ferrari F430 GT3 on the Fuji Speedway.

First off, each car took a solo lap of the track to determine the starting position for the main showdown:

Here’s how the solo laps turned out:

This set the stage for the VS. battle, with the LFA sitting in pole position due to coming in 5th (it’s in reverse order): 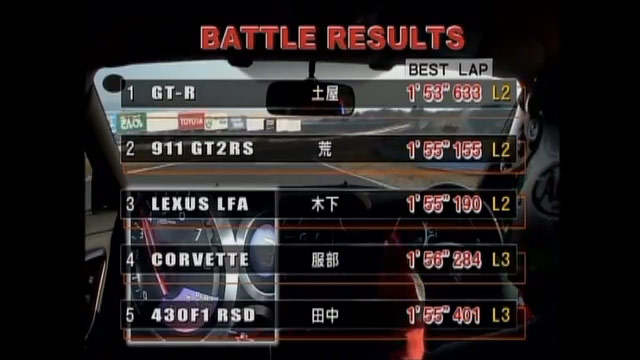 After a disappointing solo lap, the LFA redeems itself with a solid 3rd place finish — especially when you consider the rest of the cars in the race.

Still, much of the nuance in these videos was lost on me due to the language barrier, so I was enthused to find some very insightful comments by Club Lexus member Motohide, who was able to paraphrase much of the discussion — here’s a choice quote:

It was accepted before, a car like this to be rude, sinful, chaotic, irrational, perky, or dysfunctional in some ways to be at this speed and capacity. Toyota has re-defined it for this segment, and is a car that has none of the compromises and one need not fear, sweat, or endure. One can jump in, and situate comfortably, and have the car speed at stratospheric performance levels, but in expected, managable, and predicatable state of hospitality and “omotenashi”. In that sense, it is unlike any other car in the world.

You can read more of Motohide’s translation here, here & here — I highly recommend his posts to get the most out of these videos.

This race in no way represents what each car's maximum capacities are since there are too many variables here that easily skew the result in a direction.
This race is obvously going to be a hot topic for fans of all the brands involved -- but I don't think we can draw any real conclusions, especially with different drivers.

It tied 2nd place in the best lap of the battle.
Yeah, regardless of the race outcome, I don't think you could ever say the LFA is slow.

It tied second place with a car that has a Nurburgring lap time of 7:18 with far less grippier tires than GT2 RS and Nissan GTR. It was not even properly broken in yet. LFA could have easily been much quicker if Kinoshita had not let off at 9:25 for 20 seconds to let the GT2 RS catch up.

I didn't want to get too granular in my post, but there were plenty of times throughout the videos that I thought "what is that person doing?" A lot of headscratching moments, but still entertaining.
Agreed. It is nothing more than entertainment. Videos were full of flaws and variables skewing the results. Another one, when they did the 'power battle', they start the LFA in 2nd gear at 50 km/h when the optimum gear for LFA's 9500 rpm redline was 1st gear for immediate torque burst, but since other cars had 6700 rpm redlines and could not start in 1st gear at 50 km/h due to being outside the gear ratio for 1st, they chopped LFA's legs off and forced it to start in 2nd gear. Unfortunately, like all of last year, fanbois have seen this yet another opportunity to thrash the LFA. All the great achievements LFA has attained are completely disregarded.

The GT-R is a fast car - did you see it off the start? It murdered the Fiat!!!! It is also the easiest car to drive fast and requires less nerve to drive it to it's limits where as the ZR 1 is a needs a brave pilot to compete. The LFA driver looked like he left the door open a few times for the 911 but then again, what do I know.

Yeah, the GT-R's AWD system is so good it's unfair. What an amazing accomplishment that car is.

RWD inherently are much better balanced and handle better than most AWD car. That is why all racing cars in professional racing series choose RWD. However, it requires far more driving skills to extract the best out of the RWD car. GTR is a heavy tank at almost 2-tons weight and has 55% weight pinned to the radiator. This car would be absolutely NOTHING without the high grip tires, AWD and two turbochargers. Ask anyone who drove this car with traction control off. It is a nightmare to drive even for the most skilled drivers. Lexus LFA is mid-engine rear balance and lightweight is its biggest weapons. However, its weakness are mediocre tires that are designed for daily driving that can be used on the track. Almost all of these other cars are using super-sticky high-grip tires. In the case of high horsepower RWD car like LFA, putting all of that power down comes down to tires and Lexus LFA was not developed with the sole intention of running the fastest laps since it is so many different things. However, with high grip tires like the one on Nurburgring edition LFA would make LFA easily 3 - 4 seconds faster as 5% improvement is typical with high grip tires.