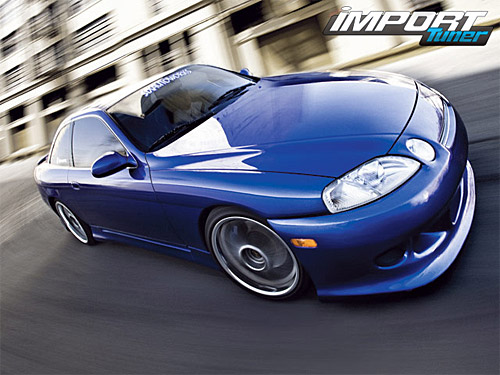 Featured in this month’s Import Tuner is the story of Geoffrey Chen, who set out to “recreate a simple, clean and practical VIP-styled [Toyota] Soarer” from his existing Lexus SC 300.

During his years researching the capabilities of the 1JZGTE engine, Chen found it could be made to hold about as much power in stock trim as its nearly indestructible 2JZ cousin. Predicated on this knowledge, and after some short conversation with Danny at SIXautoworks, Chen had a request put in overseas with GReddy for one of their T78 single turbo kits. “The kit is so rare, it’s not even kept in stock in the Japanese factories,” Chen explains. “To my knowledge, it’s the only one on an SC in the states, and one of only a handful in the world.”

All in all, though it’s an interesting technical look into a SC 300-to-Soarer conversion, the article is written with a certain verve you don’t often see in a tuner mag. Case in point:

What’s most impressive about Jeff, even more so than the car he built that’s presented on these pages, is that he was able to find that balance between passion and restraint that comes with the realization of having nothing to prove, while recapturing the simple enjoyments that are so fleeting for many of us as we strive for progression in this game.