ssun30 said:
I don't like how this forum is becoming so much anti-Tesla...they are a controversial company but have done more good than bad.
Click to expand...

That depends on if you believe all the stories of worker abuse that have been compiling in the US media.

But more to the point, I'm not anti-Tesla, I'm just disappointed in them. If they brought out a new Model S that actually was luxury-competitive with the LS and S Class, had a Lexus-like dealer and service experience, and was assembled to at least modern-GM levels of build quality I'd be ecstatic. They're doing none of that, though, so I'm just here shaking my head.

Incidentally, I understand from automotive Twitter that there was a surprise big push by the Chinese government into FCEVs at the Shanghai Motor Show, including SAIC introducing a new FCEV model and aggressive timetables for hydrogen refueling stations to roll out, but I haven't read details yet. That's quite interesting.
S

Ian Schmidt said:
Incidentally, I understand from automotive Twitter that there was a surprise big push by the Chinese government into FCEVs at the Shanghai Motor Show, including SAIC introducing a new FCEV model and aggressive timetables for hydrogen refueling stations to roll out, but I haven't read details yet. That's quite interesting.
Click to expand...

It has to do with the world's largest confirmed clathrate deposit first successfully exploited in 2017, and the best part is that it's not in contested waters. With an abundant source of methane, Hydrogen Economy suddenly becomes extremely tempting for a country without a lot of oil or gas.

Clathrate extraction is extremely risky though as a minor uncontrolled release could offset years of effort we spent controlling CO2 emissions. This is why a very cautious approach is taken and we only expect commercial exploitation in 2030s, but most cars will still be running on gasoline by then anyway.
C

A little bit strange seeing it being benchmark against the IS F. Kinda hard to hear what the car sounds like because of all the tyre noise in the video.

If we remove the weight difference with the same power and handling so we have ~350hp hot hatch , the questions are,

1) are they testing the engine performance alone or engine with the body ?

2) will they make a lexus based NG Yaris ?

3a) will the Corolla get that variant or not ?

3b) will Toyota distribute the cost for all Corolla / Yaris variants or just the hatches?
C 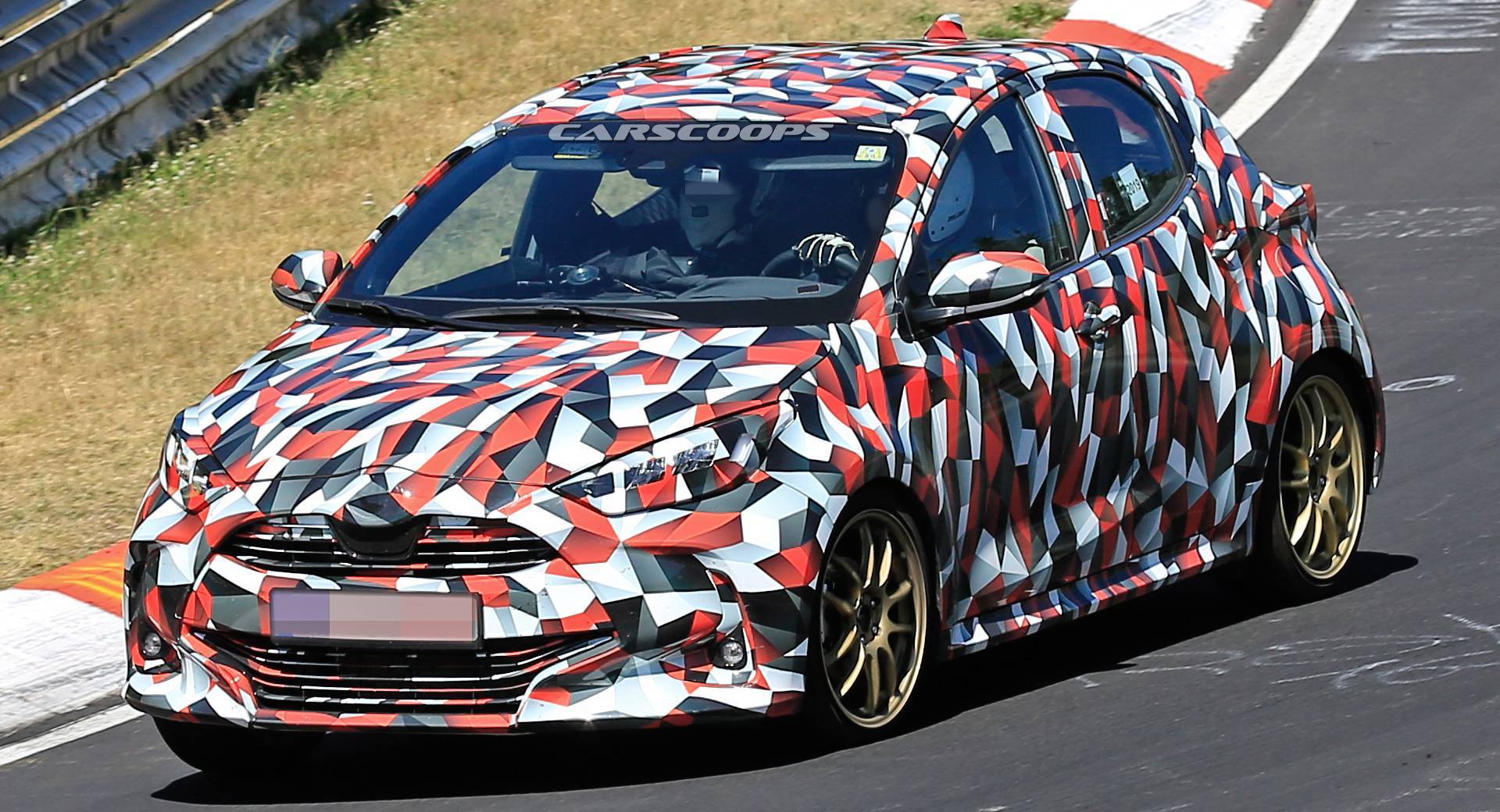 Whether in performance or hybrid guise, the upcoming Toyota Yaris looks much more modern than the current model.

www.carscoops.com
Finally spy shots of the next generation Yaris with its actual body.

The windows on the rear doors may look very Mazda 2 esque but they aren't the same. My personal favourite part is the rear end, at least based on what I can tell from these spy shots.

Interesting thing is if you look closely both Yaris have 5 bolt hubs, which is very unusual for a car of its segment. Maybe there's something more than meets the eye. I hope it stays lightweight and doesn't become as heavy as some of its European competitors, some of which are becoming almost as heavy as C-segment cars.

No one could deny striking similarity to this weeks old "fake news outlet" bestcarweb.jp CG rendering
I

I think it's Bestcar 1-0 haters. Let's see how badly haters get beaten in years to come.

so the global next generation Yaris will be a brother to Mazda 2 !!!

maiaramdan said:
so the global next generation Yaris will be a brother to Mazda 2 !!!
Click to expand...

I highly doubt it, although the resemblance is undeniable.

@flexus , it’s hard to spot anything wrong on this rendering!
This things really looks like a Mazda 2, which is a bit rubish to be honest... Feels too cheap...

why I always hear here everyone thought Mazda = cheap, it's wrong at all, it's really wrong

maiaramdan said:
why I always hear here everyone thought Mazda = cheap, it's wrong at all, it's really wrong

I believe we're perceiving quality quite differently... Were I work we've a few cars (Mazda 2, Mazda CX-3, Volvo's V40/V60/XC60/XC90), and both Mazda's are really uncomfortable for anything beyond 100km, their seats are hard with strange foam placement's. Also, Mazda's 2 are full of cricks and noises even on smooth road surfaces just because the diesel engine usual harshness. Not to mention interior quality, all the plastics are essentially hard and seem brittle (maybe one of the reasons for all of this noises...). Maybe it's because I'm more used to it but my sisters 2010 Auris HSD is a lot more comfortable, even my 1999 Avensis is way easier on longer journeys.

They do handle amazingly well for their price point, but I see quality for this segment as more than just handling

3 and 6 are amazing sedans

Sure, but even our current gen Yaris is more comfortable than Mazda's 2.

I will try to get inside a 3 or a 6 as you're making me a bit curious about them, even more regarding 3 just to check seats as I really think CX3's seats are awful.

Rendering based on early sketch. Toyota insiders say eberything about design is open. Powertrains are 2.5L hybrid and 2.4l I4 turbo. Next gen LM is also in development.

maiaramdan said:
so the global next generation Yaris will be a brother to Mazda 2 !!!
Click to expand...

Speaking of the Yaris, a user on SupraMKV posted this over a year ago... (I can't believe how similar their renderings were to what we see now). However, if I remember correctly, it's been discussed that it's more likely to be a 1.6 L turbo four cylinder...

Current type (third generation) Vitz 's debut is December 2010. It is a selling compact car class, it is a world strategy car widely deployed in Europe, but seven and a half have already passed since it first appeared.

Although this compact class has long-modeled rivals, it is expected that development of the next term model should have advanced soon .... In the place like that, the development information of a new type jumped in under the best car scoop information group It was.
Below, I would like to deliver that information in detail.

Restoration of the hot hatch that is spreading globally
Speaking of young people 's sports model, it was "Hot Hatch" based on 2 BOX. In the 1980's, the 3 rd generation Starlet was equipped with a turbo, and at the same time a city turbo and Chardy Detomaso appeared. Hot hatch, because it is based on a compact hatchback car, is affordable and highly practical, yet it also has the ability to lose the sports car, it gained high popularity at the time.

But as approaching 1990, the young people of those days moved to sports coupes like Silvia and Roadster. In addition, expensive high-performance sports such as Supra, Fairlady Z, GT-R, RX-7 became the yearning personality.

However, recently attention to sports models based on compact hatchbacks is on the rise.

Domestic cars have swift sports and notes NISMO, but the number is still small. But looking overseas, VW Polo GTI and Fiat 500 based Abarth are no longer standard in this category, last year Renault Twingo's high-performance version of "GT" appeared. In addition, there are also Rutecia RS and Peugeot 208 GTi, etc. European compact hatch has very attractive sports grade set, and the car type is substantial.

The European compact hatch is a grade composition with the sports model as the top grade, raising the attractiveness of the whole model.

And now, Toyota is trying to do with the next model of Vitz.

■ New Vitz revised Yaris, design turns out!
According to the information grabbed by the best car magazine this time, the next term Vitz renamed it. Rename it to the world-unified "Yaris".

In addition, this time we got new information of the next type further.

First of all, the design was fully discovered.

This time, the design is fully discovered. A large front grill and a body line with edges in some places are adopted, and the standard model is reborn into a sporty design

The front mask is characterized by adopting a powerful large grill which is common with the new type Corolla hatchback published in North America in March. The character line which wraps around from the rear fender to the back side is also impressive. Its body size is standard car with total length 3940 × full width 1695 × total height 1475 mm. The sports model will be a 3 number wide body.

And this sports model is the "GR" model in which know-how in motor sports was introduced, becoming the most noticeable grade in the next model.

For the present, Toyota is currently participating in WRC at Yaris, but in fact it is aimed to make use of this WRC image to the commercial Yaris. Therefore, the presence of the sports model "GR" deeply involved in motor sports is important.

Also, I got more details about onboard engines. All NA cars are in-line 3 cylinders, 1L, 1.3L, 1.5L are prepared as standard model engines, and the combined transmission is CVT.

The view from the rear is a feature on the design line that leads to turn around from the rear fender to the rear hatch. Appearance is prevalent at the end of 2019

A hybrid is also set up, and this is 1.5L + THS which is the same as conventional Aqua. In addition to FF, HV 4WD of the same system as Prius is also prepared.

The sports model's GR is equipped with a 1.6 l three-cylinder turbo. There is information that transmission is combined with 6-speed MT, and newly developed high-power compatible AT.

For debut, the standard model is expected to be the end of 2019, GR to be delayed by about 1 year to 2020. In addition, the sports model is also planning a GRMN model that expands the tuning range to the engine and can enjoy more extreme running, so this is also expected.

The "GR" specification of the sports model is equipped with a newly developed 1.6L straight 3 turbo. It adopts wide fender and it becomes 3 number size. Yaris which wins the WRC (World Rally Championship) is a model that strongly reflects "its image" in the new model

Speaking of Vitz, the first model appeared in 1999 (as a successor to Starlet), and the third generation, which is the current type, was born in December 2010. It has been progressing steadily since then for seven and a half years, but here I am going to compete with the car name "Yaris" to fully demonstrate its role as a world strategic car.

I would like to inform you on this issue as soon as a follow-up report is received."
S

1.6l 240-250hp engine will be used in multiple GR vehicles, it has been talked about for part years
C

The rear end of the rendering doesn't look right at all, it looks like they took the back of a Jazz/Fit and just slap on a set of weird looking taillights.

One can clearly see the Yaris prototypes have a very "3D" rear end, instead of a "flat as a pancake" rear end of the rendering.
Last edited: Jul 10, 2019
You must log in or register to reply here.
Share:
Reddit Pinterest Tumblr WhatsApp Email Link
Top