BMW's new Z4 convertible is being developed alongside new Toyota Supra, and BMW has now teased it in concept form

The new BMW Z4 has been officially teased for the first time, with a single, shadowy image of the new sports car, plus a promised unveiling next month.

The new Audi TT and Mercedes SLC rival will make its debut on 17 August. While that rules out a Frankfurt Motor Show reveal, it matches up nicely with the 2017 edition of the Pebble Beach Concours d’Elegance and Monterey Car Week.

With BMW choosing Pebble Beach to debut the Z4, it’s likely that we’ll see the car in concept form rather than the finished product – full debuts are few and far between at the Monterey Car Week, though concept vehicles, one-offs and special edition cars often break cover.

Therefore, we could see BMW unfurl the new Z4 in a similar manner to the all-new 8 Series, with a revealing concept vehicle to whet the appetite for the production model.

Our exclusive images show how the new two-seat roadster could look when it arrives. It has already been spotted testing on multiple occasions, with the most recent spyshots showing it winter testing with a slightly more revealing disguise compared to earlier mules lapping the Nurburgring.

The new Z4 Roadster will replace the ageing second-generation model, in production since 2009, and be a fresh rival for the likes of the Porsche 718 Boxster, as well as a reborn Toyota Supracurrently being developed in parallel and set to use the same platform.

It's likely the new car will ditch the current Z4's heavy metal folding roof for a lighter, more traditional fabric hood. This could mean it's being aimed more towards the Porsche 718 Boxster and away from softer, more refined cars like the Mercedes SLC. The soft-top will gain a rear window for production.

An insider told us that “this car will use the same lightweight body construction as the i3 and i8. And even with that type of construction, you can expect a price around the same as that of the current Z4."

The familiar set-back cabin, pert rear-end and long bonnet remain on the new model and the kidney grille looks to be larger than ever.

Mounted behind the front axle will be a range of BMW’s ‘TwinPower’ turbo petrol engines which will be offered in both four and six-cylinder forms. Expect at least 200bhp from base models, with top-end turbocharged straight-six variants nudging 300bhp. As before, all cars will be rear-wheel drive.

The Z4 will also use the same rear axle design as the M3 and M4, and it’s likely that a full M version will follow within a year, possibly using the M2’s 365bhp 3.0-litre straight-six.

The Z4 also provides a base for Toyota’s new super-coupe. Rumours suggest it will bring back the iconic 'Supra' name, though unlike the Z4 Roadster it'll be a hard-top coupe, influenced by the FT-1 concept from 2014.

The Toyota version has potential to receive a plug-in hybrid model, with electric motors boosting output instead of a turbocharger.
Click to expand...

Very excited to see this thing...

While I'm not in love with the blue rendering, I do think it looks better than the current Z4.

I'm only here for all the frog comparisons.
S

I think it's freaking beautiful. Between this and the 8 Series concept, BMW knows how to design some sporty 2 doors...

I like it. So much better than the current boring Z4. Hopefully the production car won't be water down too much.
S

It's absolutely gorgeous. BMW did a great job.
S

Meet the future: Many parts of the Concept Z4 are already very close to the serial version

Finally. The wait is finally over!

BMW has not been building a crunchy roadster for more than a year. 2018 finally the Z4 successor to come.

For the first time with a flat kidney, the headlights are now superimposed. New are the shark nose and the honeycomb structure of the cooler instead of the classic kidney bars. The engine draws in air through wide radiator openings. The engine hood arched over the wheels, almost without joints and edges - very smart. Stylish ventilation slits indicate this.

Carbon to the front, rear and the entry rails reduce the weight. The production car is estimated to weigh 1.4 tonnes. The typical gills at the A-pillar and the curved door provide more light and shade - this gives visually more power. "This makes the study very sporty," says designer Marc Girard, head of the conceptcar department at BMW.

From the front, however, the concept car recalls a Jaguar F-Type.

The light red soft top will be hidden behind long drawn-out hooves with an integrated rollover bar. In the short tail are duckbürzel, carbondiffusor, 3D-LED taillights, bullige exhaust tailpipes and in the center in between a small red lamp - as with Supersportwagen. The 20-inch wheels integrate cleanly into the wheel arches.

The thin mirror arms, retractable door handles and the fanned taillights will not make it into the series. The next Z4 will opt for the larger 8 series, which also comes 2018. "86 percent of the study will be seen in the production model next year," says Girard.

I drop myself very slowly into the dark brown seat, exactly in the center of the car. Driver's seat as well as door mirror, instrument panel and center console are in black and set off from the rest in color. Fine nubuck and smooth leather dresses the interior. BMW calls the exterior color "Energetic Orange". Pure energy.

The study is a one-off, I must be very careful. An employee wipes my fingerprints at the door immediately with a cloth. I can only touch the clever leather steering wheel carefully. The instruments aim at the driver. New: Both displays can be combined and the presentations can be moved back and forth by touch. The keys are missing in the center console. Via voice control or the I-Drive rotary / push control in the center, the entertainment can be used.

BMW speaks of the next ultimate driving machine, of freedom on four wheels. Easy, direct, strong.

The new roadster (internally G29) is to get right under the long bonnet. BMW does not yet specify any technical data and prices. Only so much: The standard model is to be ready next year, weigh little, have rear-wheel drive and be fired by strong four- and six-cylinder engines. Between 200 hp and 360 hp would be in it.

So the next summer can come. We look forward to the first ride.
Click to expand... 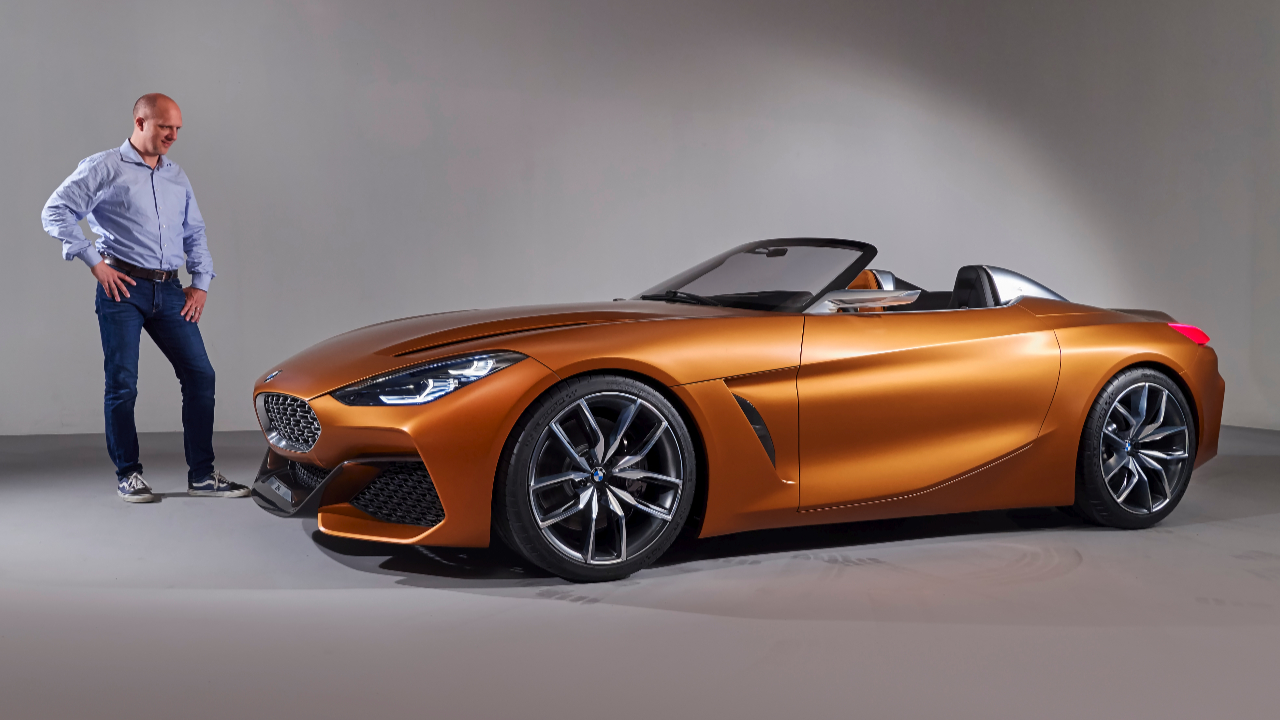 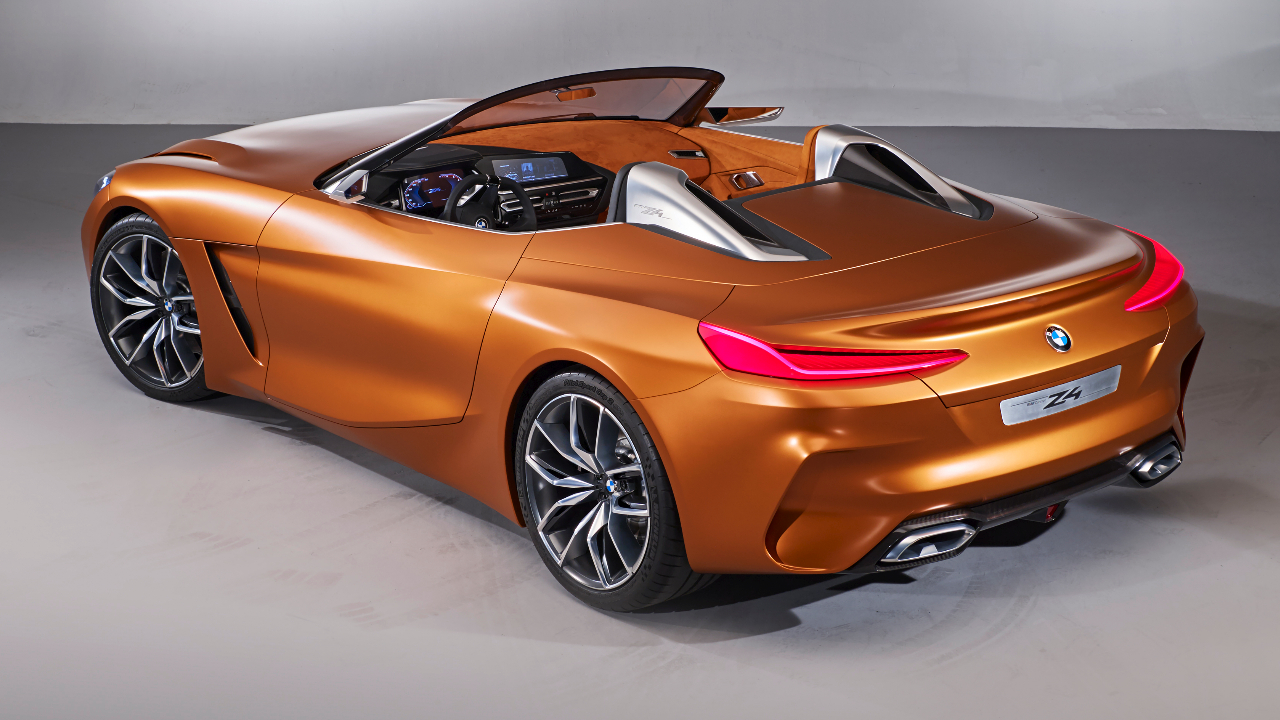 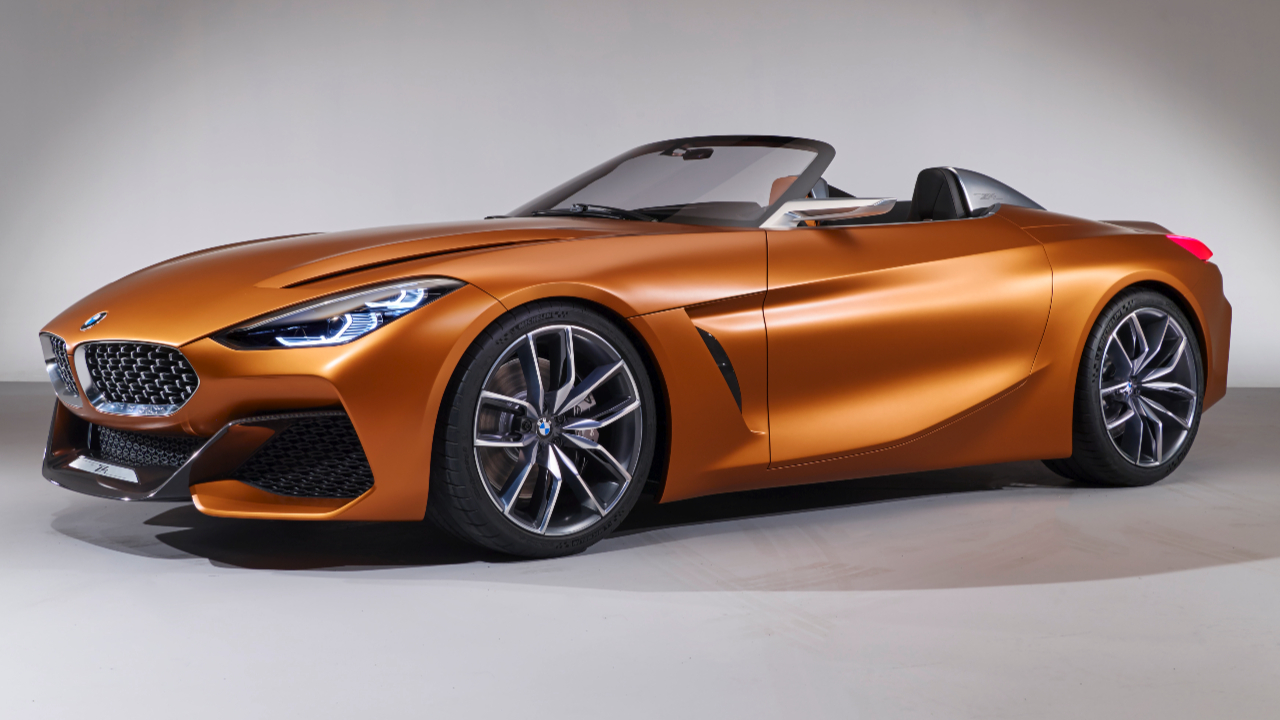 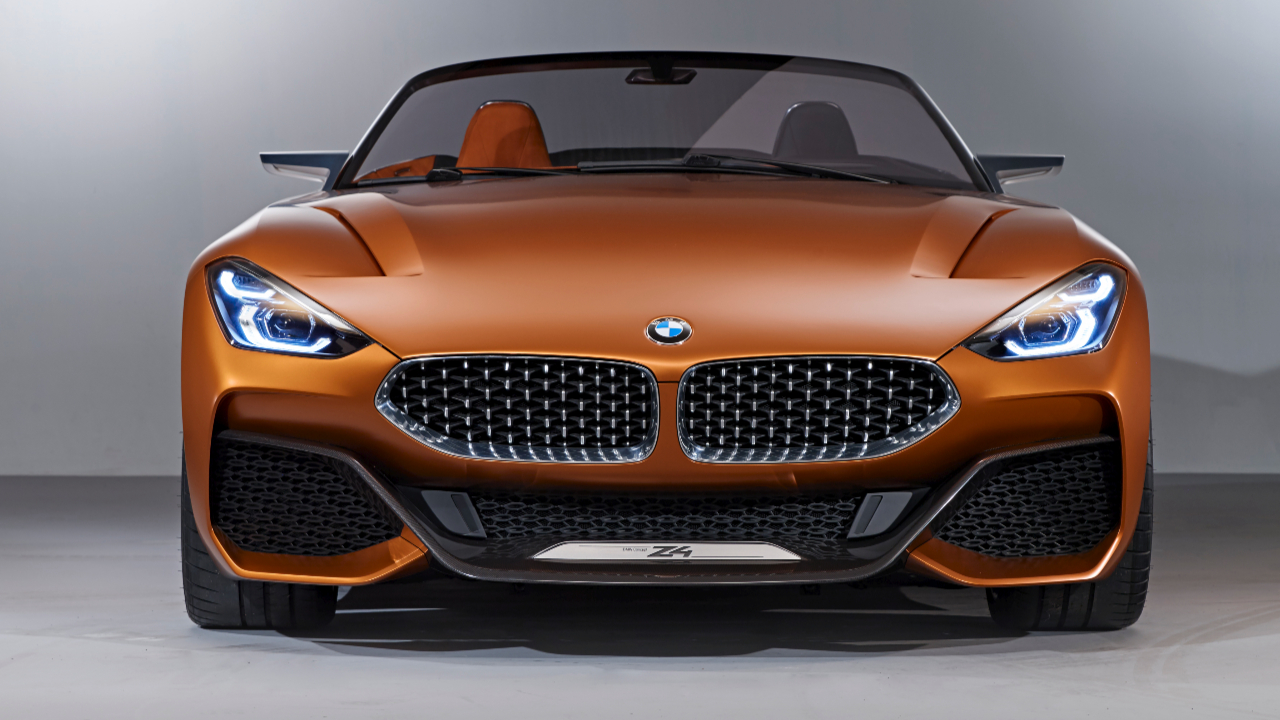 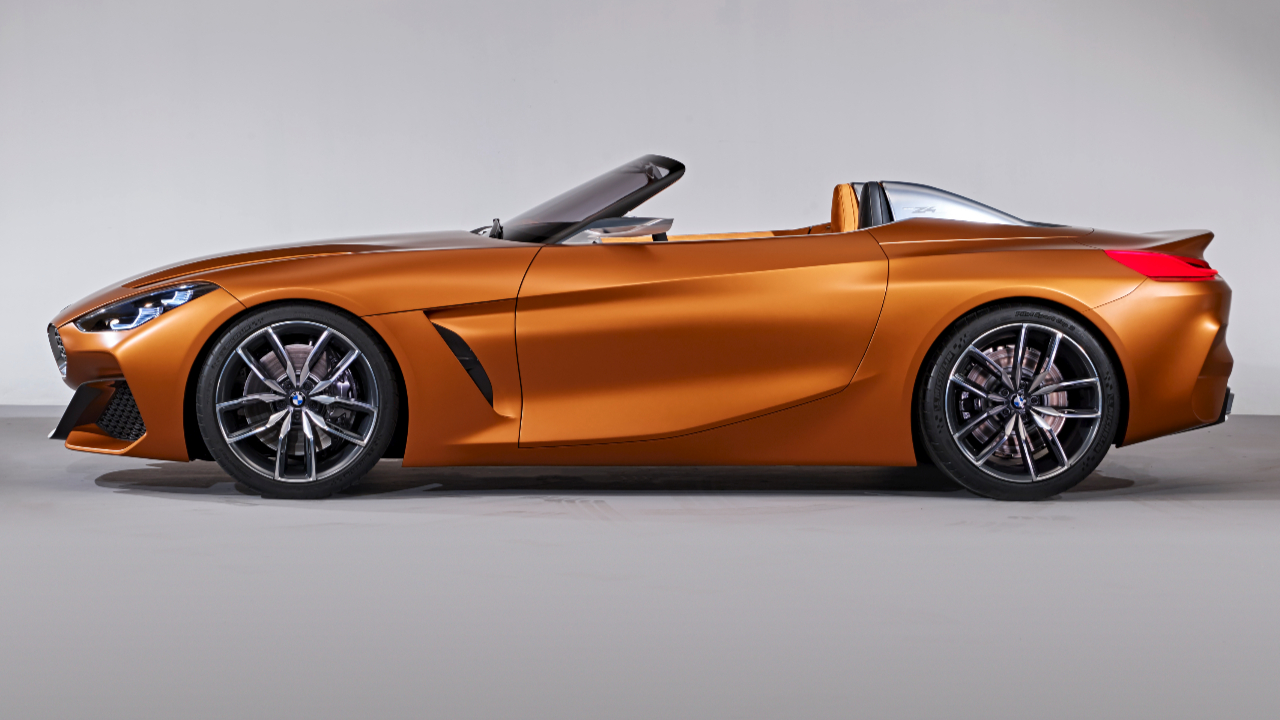 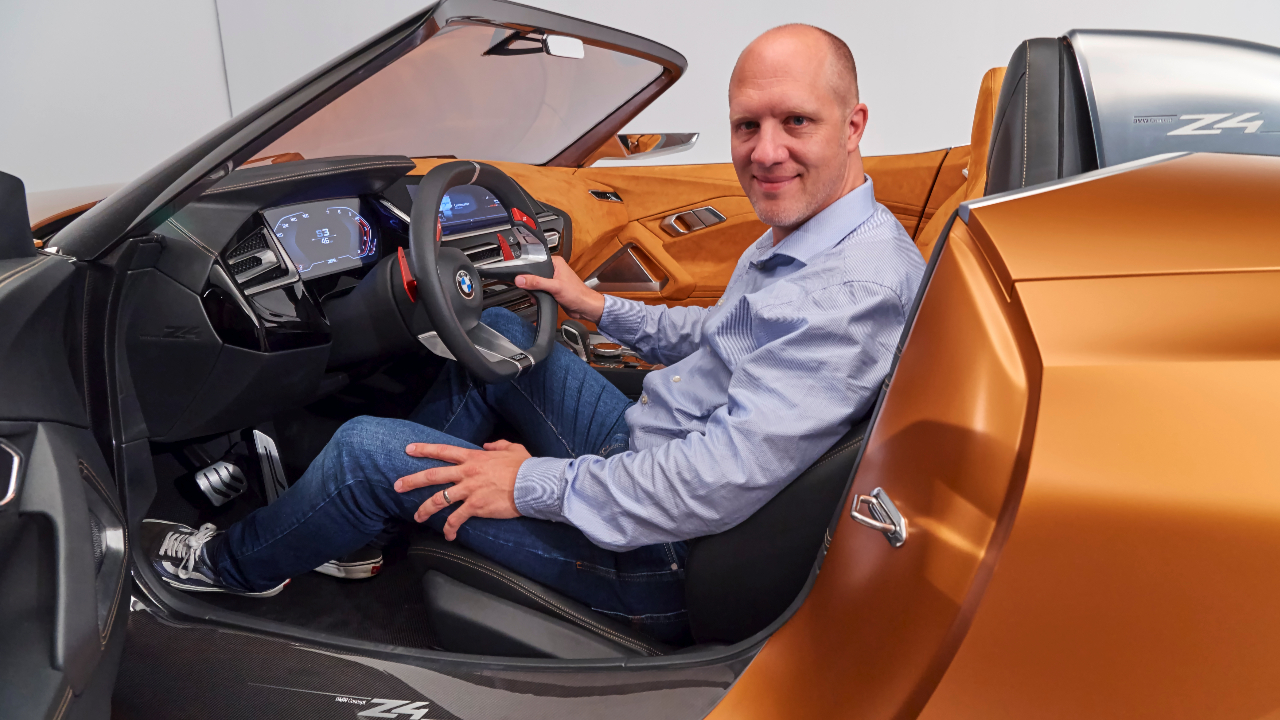 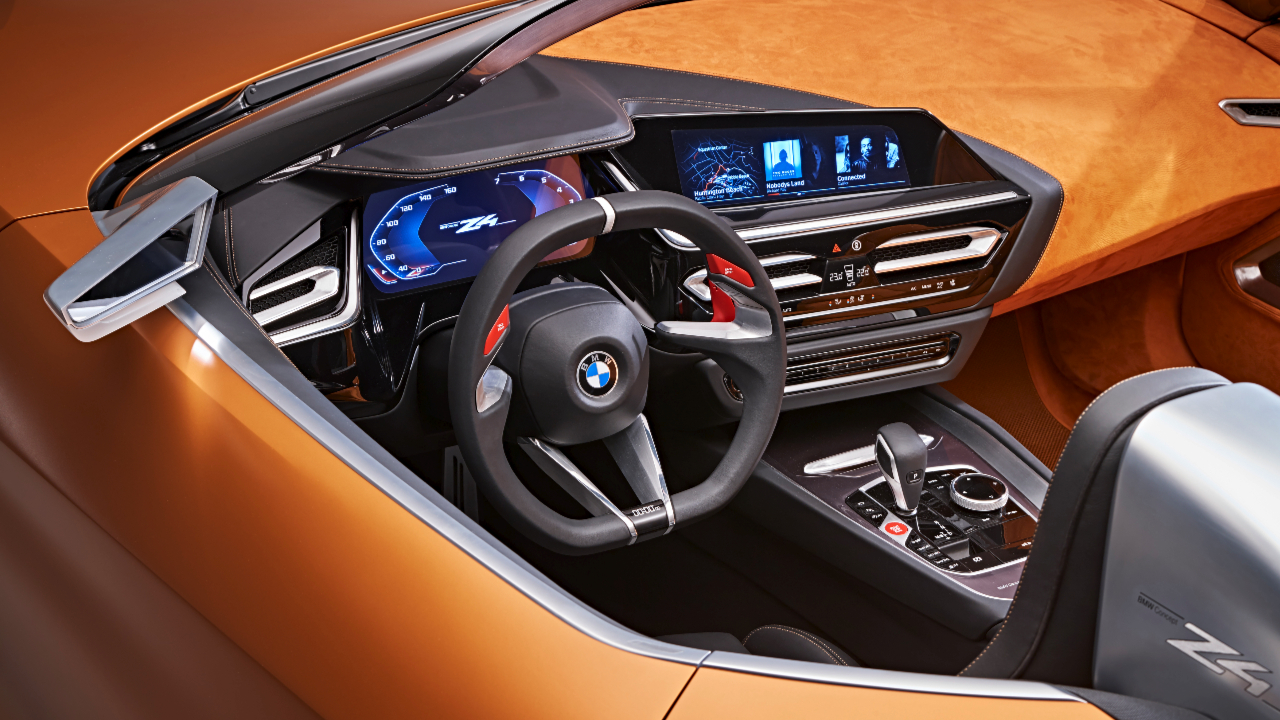