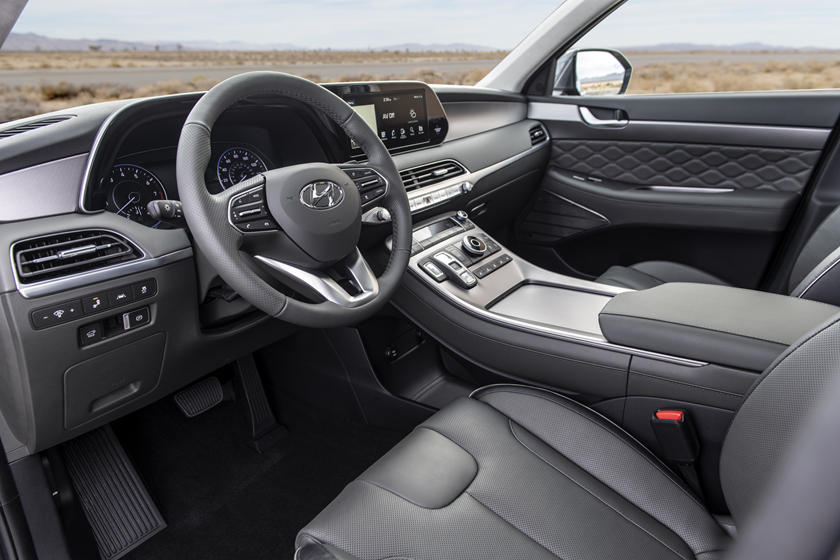 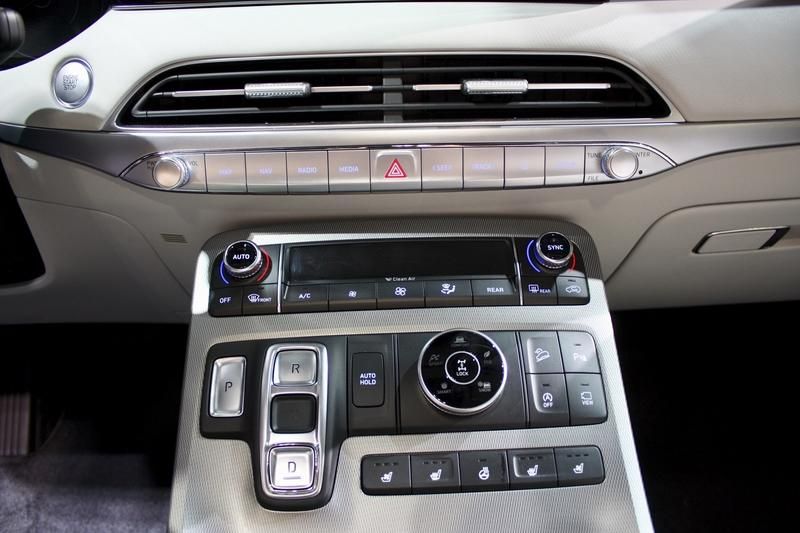 After a couple-week wait from when I did earlier static-inspections of both the Kia Telluride and Hyundai Palisade, I finally got a chance to test-drive a Palisade today. The big Hyundai/Genesis dealership was at had several Palisades in stock, unsold, and, for the test-drive, I chose a Gray SE AWD model that, at $34,775 list, seemed somewhat of a bargain for the price, though some of that bargain-price is muted by the fact that the dealership is asking full-list for it (which is to surprising on a popular new SUV). Rather than try to link a new thread to two or more earlier ones, I'll just do a separate test-drive thread here and briefly include a brief summary of both of my earlier inspection(s).

The Telluride and Palisade, of course, are (more or less) corporate twins, done on the same platform/chassis/drivetrain, although they have different interiors, dash, and outside trim/styling for front and rear ends. I general, inside and out, I liked the looks and materials of the Palisade better....it had what I thought was somewhat classier styling. There also seemed to be less of a visual-shock, style-wise, between the entry-level and upmarket versions of the Palisade. The Telluride, especially inside, seemed to be more of a jump between the cheapish base and top-level SX versions...though the trim on the SX versions was nice. Both the Telluride and Palisade look substantially smaller up close, in real life, than they do in pictures and ads. I don't know if this is a result of the camera lens, camera-angles, or just an optical-illusion from the styling, but the ads make one think that these are (borderline) full-size SUVs when they are actually closer to mid-size. Both of them have third-row seats, though, and, while crossovers, are clearly not intended to be part of the CUV (small/cute SUV) class. But these are still definitely family-machines, any way you look at it. Though still better than average in several areas, neither the Telluride or the Palisade seemed quite as solidly-built as previous recent Kia and Hyundai products. Perhaps the corporation, after a number of years of top-notch workmanship and hardware (and rising prices) on their vehicles as well, is starting to feel some pinch, and a need to cut costs. Still, it is a relatively minor issue, and both have material quality and workmanship that is comparable to, or better, than that of many of their competitors.

As aforementioned, for the test-drive itself, I chose a base-level Palisade that seemed a bargain at its $34,775 price, though it included almost on options or accessories. When I got in, for instance, I had to adjust my seat with a couple of manual pump-levers and a slide/pull-bar. That's fine for one person, but something to think about if you are going to have more than one driver getting in and out regularly......might as well just pay a little more and get an upmarket version with power seats and/or memory-function. The cloth drivers' seat itself, though, is extremely comfortable, and fits the shape of my torso and rump perfectly, even with seat-padding that, like on most Korean-designed vales, is a little firmer than I'd like. The base-level Palisade has nice tall 18" 60-series tires that help smooth out the ride a little...but not as much as I expected (more on that in a minute).

On the SE version, start the 3.8L normally-aspirated V6 (it is standard on all versions of the Palisade and Telluride, a real feather in the cap of both companies) with a dated-style key, fob, and side-mounted ignition switch on the steering column. Want push-button? You'll have to move up to another trim level or a special package, but I actually like the dated key-setup, for several reasons. Still, it's nice to have a standard V6...I'm not a big fan of turbo fours. This, however, is not a particularly powerful V6 for its size, with 262 ft-lbs. of torque, but that's enough for most normal driving needs. Besides, the main advantage of an engine like this is refinement, not power.....and, in that area, it does not disappoint.

Neither does the standard Shift-Tronic 8-speed automatic, whose shifts seemed smooth, well-spaced, and instantaneous/lightning-quick shifts, with no slip or hesitation all between gears. It felt almost like one of VW's original superb, smooth twin-clutch auto-manuals in its operation. Park/Drive/Reverse functions are controlled by large, well-marked square buttons on the console.....even a monkey would have a hard time mismanaging them.

The rest of the SE's road manners, though, varied from nice to not-so-nice. The steering response was fairly quick for an SUV this size, but the steering itself had a light rubbery feel, and there was noticeable body roll despite the rather firm suspension. Ride comfort was OK, but not as silky a I had expected from the 60-series tires.....perhaps the suspension needed some firmness to accommodate seven people in its three-row seats. The ride, however, seemed to smooth out a little as the tires and suspension/shock-fluid warmed up on the road, though it was a fairly typical hot D.C. summer day as it was, with a little less humidity than usual. Road noise level, though not obtrusive, was noticeable, especially on rough or coarse asphalt pavement. Wind noise, as on most modern vehicles (and, especially, with the relatively tight standards of Hyundai/Kia workmanship/materials) was well-muted. Drive-modes, which includes a number of settings for both good and bad weather, is controlled by a rotary-knob on the console, very smooth but a little sensitive in its operation...you have to be careful to twist/align it lightly and carefully, when a light for each function will show. The Sport function seemed to raise the transmission shift-points some, but little else...the ride, to me at least, didn't feel any firmer. The Eco function also didn't seem to do much but lower the transmission shift-points a little for better economy. Normal is the default setting, and probably where most drivers will leave it most of the time, though there are a couple of others, including one for snow which limits torque starting up from rest...and, of course, the AWD drive helps out there.

And, there are a couple of quirks in the electronics that I personally found annoying, though other persons may not necessary be bothered by them. Chief among them is the lane-drift feature, which, to my taste, is WAY over-sensitive and is constantly tugging at the steering wheel when you are trying to drive yourself. I finally said the heck with it, and shut the feature off....a button on the under left side of the dash. Then, there is the programming of the the Heat/Vent/AC system, which, even in Manual-Control mode, also has a mind its own. The A/C button, which turns the compressor on and off with a small blue light, will only work in certain settings with vent/levels or outside/recirculated air, and some vents will not operate at all on certain heat/AC settings. I don't know who designed the programming on this system, but IMO it is a mess. Yes, it's true that many vehicles automatically switch from recirculate to outside air when the windshield defrost is on (that's a safety-feature to keep the interior of the windshield from fogging up from recirculating the same interior humidity), but, otherwise, they get by without this complex electronic guessing-game. I was generally pleased with the brakes, which were reasonably effective, and had a well-placed brake pedal which did not interfere much with my big size-15 shoes moving from the gas to the brake and getting caught on the edge of the pedal, like it does on some vehicles.

Anyhow, though, quirks aside, the Palisade SE is a pretty nice vehicle, though it could be a little nicer in some areas. I'd recommend getting an upmarket version, with the power seats, if frequent re-adjustment of the driver's seat is going to be an issue...such as with a husband and wife often alternating as the drive. Otherwise, if you have 35K to spend and want a well-built, mid-to-large-size SUV with one of the best standard factory warranties in the business, consider one.

This thing is a Pilot killer. Selling like crazy, at or near MSRP and they can't build enough. Its amazing the excitement people have for a SUV.