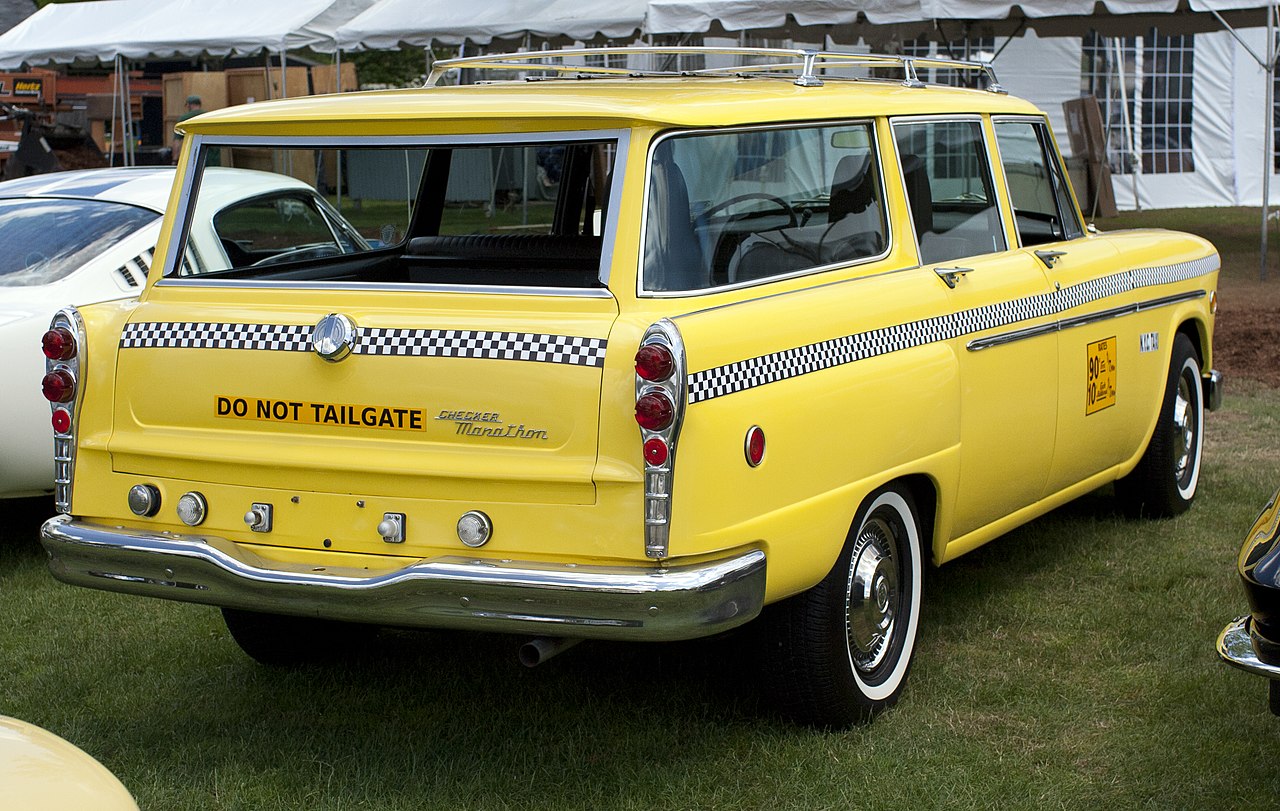 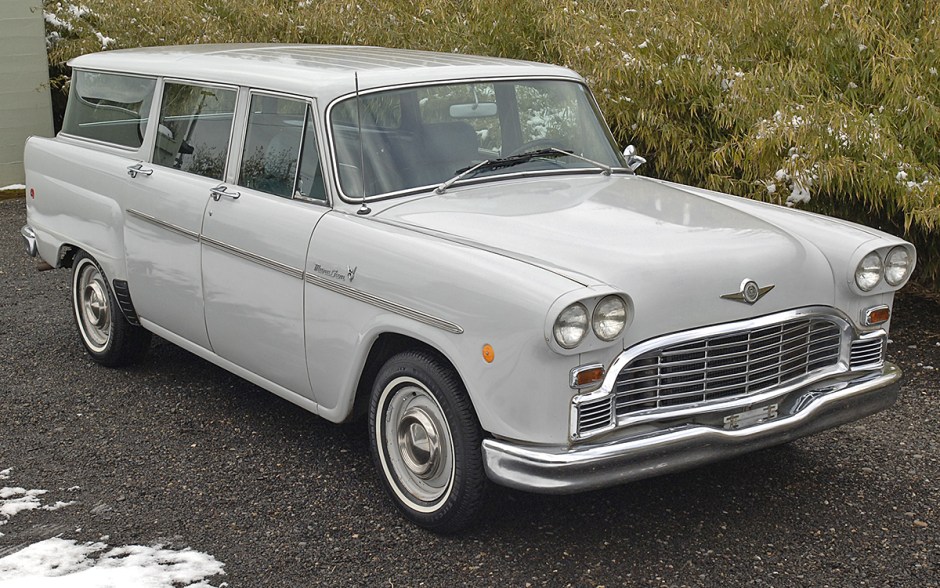 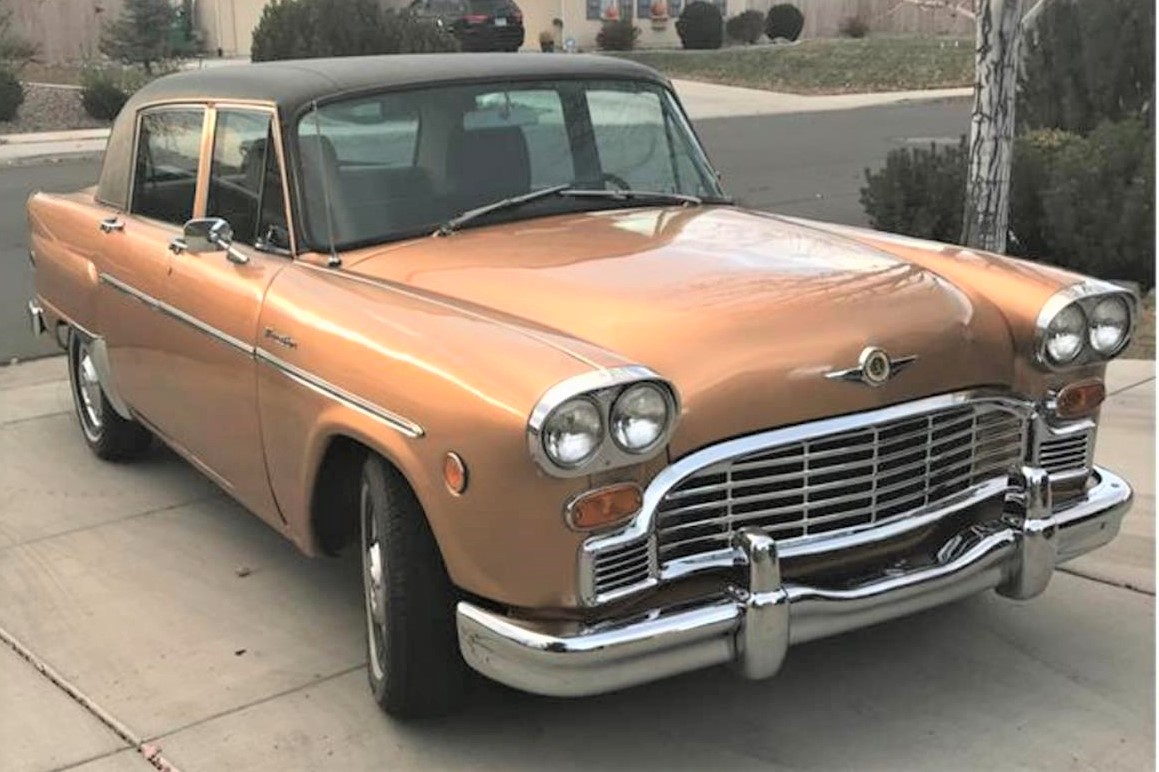 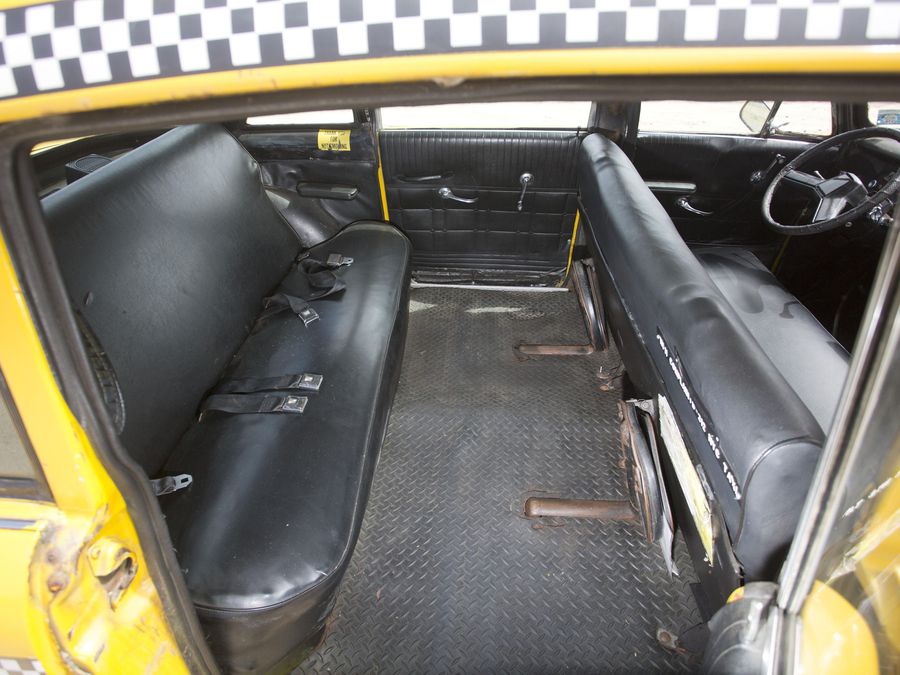 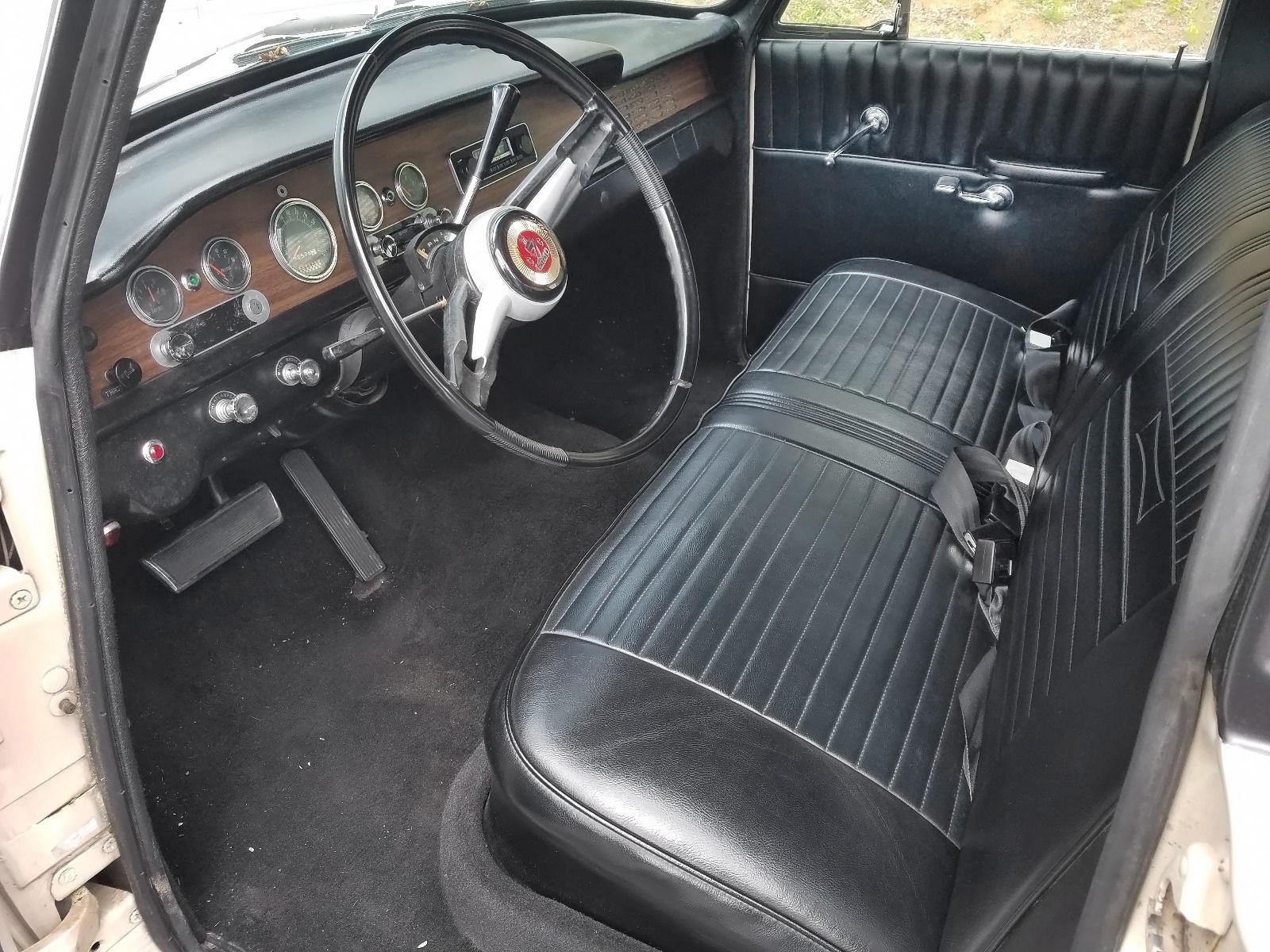 IN A NUTSHELL: The ubiquitous American taxicab....1950s styling that lasted into the 1980s.

In an American automotive world where, for decades, better meant longer, lower, wider, more power, more features/conveniences, and, often more bling, the Checker Marathon stood out, like the air-cooled rear-engined VW Beetle, as a truly unique vehicle whose very symbol meant practicality, utility, resistance to change (especially just for change's sake), and mobility-for-hire. Introduced in 1960, for the 1961 model year, by the Checker Corporation of Kalamazoo, Michigan, it immediately became a hit with many taxi companies in large cities because of its ultra-conservative early/mid-1950s styling, lack of tail-fins, roomy/space-efficient interior, stout body/frame construction, ability to stand up to potholes on city streets, simple no-nonsense interior that emphasized utility over gimmicks, and the more or less continuity of the general design, which did not change from one year to the next, making many parts relatively easy to get. It was, in many ways, the near-perfect taxicab, though many taxi firms also chose to purchase Plymouth/Dodge sedans with the extremely durable Slant-Six engines and the almost-as-durable small V8s. Together, the Marathon and the Plymouth/Dodge sedans, for years, dominated the American taxi scene, although, of course, the Chrysler products changed every couple of years and the Marathons didn't.

A notable difference, however, between the Marathon and the Plymouth/Dodge taxicabs, was the fact that the Chrysler products used their own corporate-designed engines/transmissions, whereas Checker was not in the business of designing powertrains, and had to rely on other companies to supply them. The engines for the first few years were L-head straight-sixes (OHV sixes on the station-wagons) that came from Continental, a company that also produced agricultural and air-cooled general-aviation engines (I've flown a couple of light planes with Continental flat-air-cooled sizes in them). A Perkins diesel was an option for one year. Most, however, over the years, were built with Chevrolet 250 c.i. (4.1L) in-line sixes and small-block Chevy V8s of varying displacements, with Chevy, of course, being in a position to supply relatively large numbers of drivetrains. Near the end of production in the early 1980s, a few GM-sourced V6s were used. A few stretched versions with 6 doors were built, but it never really caught on as executive transport, because it was never designed as a luxury vehicle to start with.

Marathons were also bought up by some police departments, among them, notably (and not surprising), the Kalamazoo Police Department where the factory was located. But, in general, it was first and foremost a taxicab, although a number of civilian versions, including a classic square-styled station-wagon, were produced for those private customers who appreciated the car's uniqueness, durability, and wanted one as their daily-driver. But the noted lack of dealerships meant that most of the sales were going to be in fleet-units.

I don't really consider myself an expert on how the Marathons drove, as I never owned one, and only rode around in them on a few occasions....whereas, of course, as a teen-ager, I knew the competing Plymouth/Dodge Slant-Six products inside and out, since I had first learned to drive on them, and had spent many hours in them. I did, however, get a couple of chances to test-drive one or two Marathons (not for a long distance), and, when I was a teen-ager working in a car wash after school hours, ferried a number of them in and around the wash. The local cab companies would bring them to the wash like clockwork, and I'd drive them in, hook them up, unhook them, drive them out, and help dry them. What little experience (and limited distance) I had in them clearly showed one thing, though....they were MUCH different in basic feel from the velvety-slick GM and Ford products of the era, and a little closer (but not exactly) like the unibody Chrysler products, though the Marathons were body-on-frame in their basic design. The big GM cars and most of the big Fords of the era (late 60s) had ultra-plush seats inside, particularly on upper-trim levels, excellent soundproofing, and a velvety-smooth character to them....and the GM cars, in particular, had fine-detailing on the dash, door-panels, upholstery, and bodywork. In contrast, the Chrysler products were more utilitarian-looking, more crudely-assembled/finished, lacked detail, and lacked sound-insulation, although their drivetrains were durable and their handling, with the torsion-front/leaf-rear suspensions, was better than most of Ford or GM. The Marathons were much-better-assembled than the Chrysler products, but had much of the same utilitarian character inside, even on the ones built for private owners, which had slightly better interiors than the utilitarian taxicabs. The Marathons seemed a little better-insulated against noise than the Chrysler products, simply by the fact that their bodies were built like tanks, were bolted onto separate frames, and did not have the noisy-but-effective (for handling) Chrysler suspensions. I do distinctly remember that Marathons, like the Chrysler products, also steered with well-overboosted power steering that took only one finger, whereas the Fords and GMs had softer suspensions but a slightly firmer feel to the steering.

Nothing lasts forever, of course, but the Marathon remained in production a long time....until 1982. That's quite a while, particularly for a vehicle that basically did not change its design every couple of years the way most vehicles did back then. But the taxi companies (and a few police-departments) kept demanding the vehicle in fleet-orders, so, of course, there was an incentive for Checker to keep them in production...and for GM to keep selling them powertrains. Eventually, though, for a number of reasons, ever-tightening Federal regulations made it more and more difficult to adapt the1950s design of the Marathons to the modern world, and the long-ubiquitous taxicab sadly met its demise.

And, as Always, Happy Car-Memories.