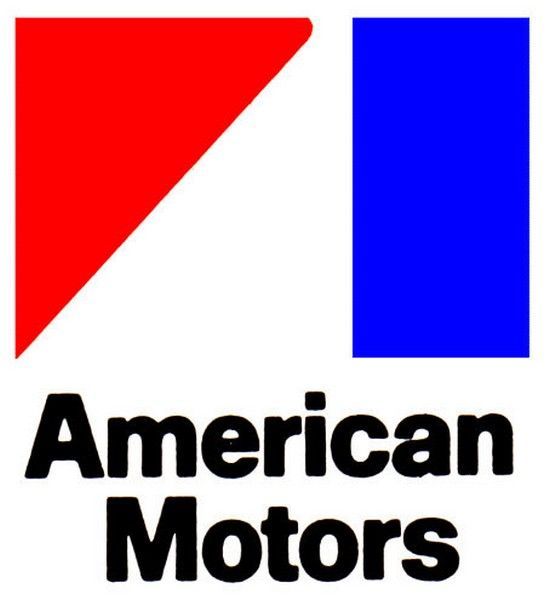 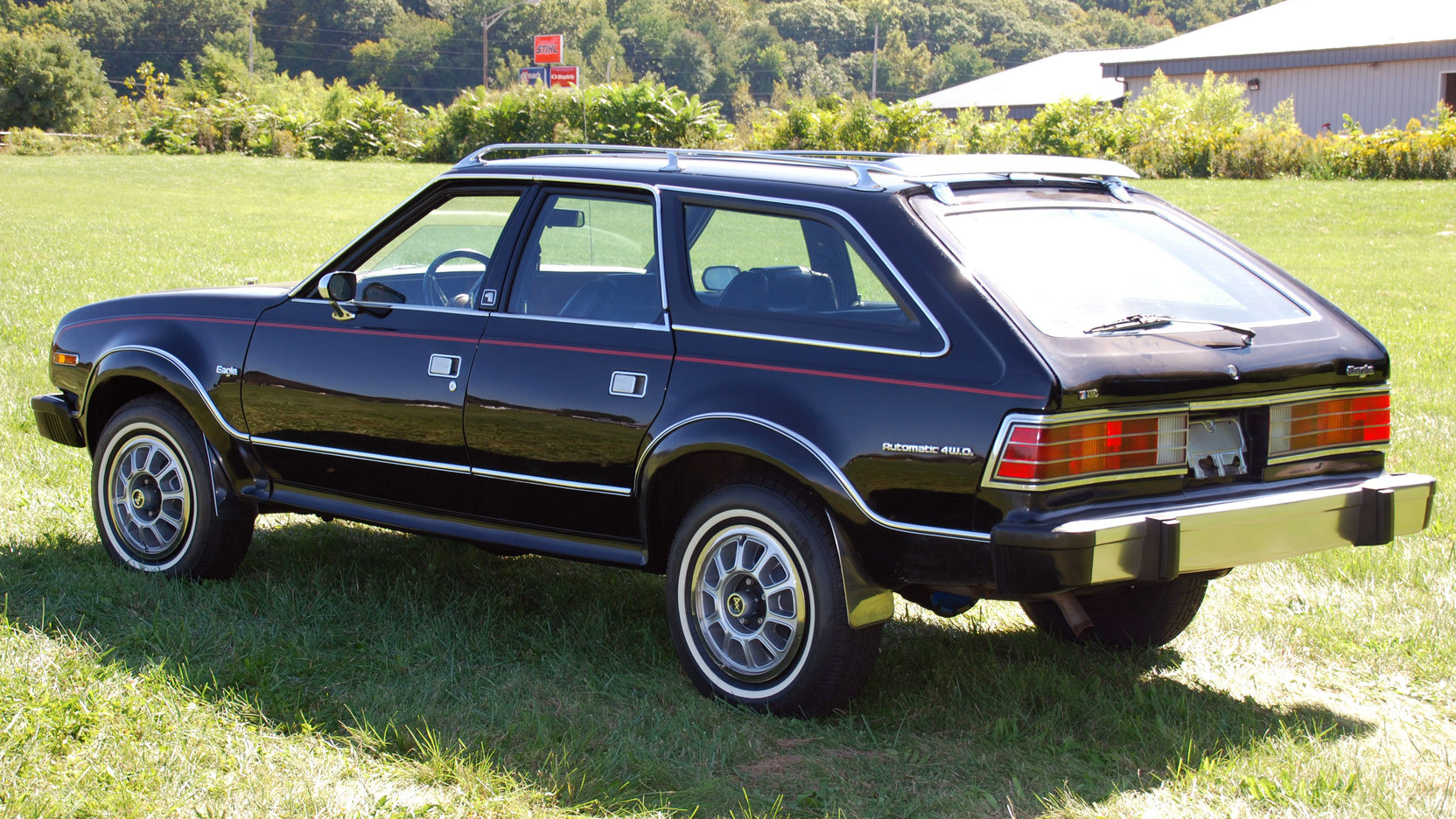 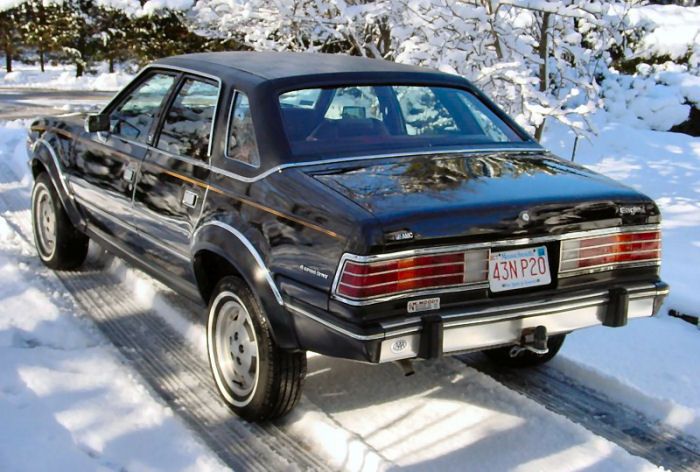 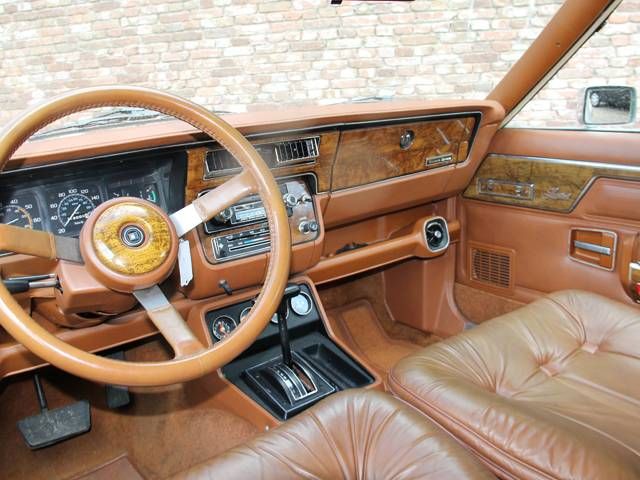 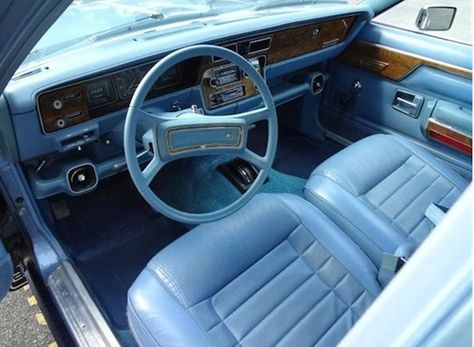 IN A NUTSHELL: The original AWD crossover-vehicle, and fifteen years ahead of its time.

AMC (American Motors), as a corporation, tends to be overlooked in automotive history, as, for most of its own history (and in its earlier ties to Nash and Hudson) it was overshadowed by Detroit's Big Three, and, for a time, after Renault ownership, was actually owned by one of the Big Three (Chrysler). However, despite some controversial styling-designs such as the Gremlin, Pacer, and mid-70s Javelin, most of its vehicles drove like appliances, and it was never really able to significantly bite into the Big Three's share of the U.S. market. By the late 1970s, it was foundering badly, and the company decided it had to do something new and radical, to give the public a good reason to visit an AMC showroom.

The project turned out to be the 1980 Eagle, based on the compact Hornet/Concord, and the smaller Eagle SX-4, based on the sub-compact Gremlin/Spirit. The Eagle represented something that had never been attempted before on a production basis...a regular production station-wagon/sedan/hatchback, raised up several inches from its normal suspension-height for added ground clearance, and equipped with a novel car-based All-Wheel-Drive system. This differed radically from earlier, truck/Jeep-based 4WD systems, which had no center differential, went in and out of 4WD with a manually-shifted transfer-case, locked up all four drive wheels up at the same rotation-speed, usable only off-road or on slick surfaces, and, sometimes, required the driver to stop the vehicle, get out, and manually lock or unlock the front hubs to engage/disengage. AMC's new system did away with most of that procedure, with an automatic transfer-case, permanently-locked front hubs, and a center-differential, which used a viscous-type material inside to split the torque between front and rear wheels, which, in conjunction with the front/rear differentials, allowed all four wheels to rotate at different speeds, so the vehicle could go around dry-pavement curves without binding up. Although the Eagles used a traditional fore/aft engine-alignment (AMC in-line sixes hooked to the Chrysler Torque-Flite automatic transmission), the general idea, using transverse-engines, became the cornerstone, some 15 years ahead of its time, for an eventual revolution in the auto industry. Subaru, which, along with Audi, had perfected the concept of car-based AWD after AMC went out of business, expanded upon the Eagle's original idea with its revolutionary 1995 Outback, which went on to enjoy tremendous success, and is still a huge seller today. Indeed, today's entire world of crossover AWD vehicles, which represent a clear majority of the industry today, can ultimately thank AMC for the original concept.

Despite the fact that it was not a huge seller (and, of course, did not prevent AMC from going out of business), the Eagle and SX-4 had several other advantages besides just the concept of the new torque-slitting viscous-coupling. Its higher ground clearance made it easier to go through deep snow, even with AWD, without getting stuck. The ground clearance also made repairs/service under the car easier without using a lift or ramps. The doors were at just the right height for easy entry/exit without having to stoop down or step up on a running-board...a boon for a lot of older people. And ditto for the trunk-loading height...easier loading/unloading.

Unfortunately, perhaps because of the AMC logo (the public, back then, was not particularly enchanted with the company), these cars languished in the sales department, and their true worth was not recognized until well over a decade later. This was not (and is not) the first time in automotive history that something like that had happened, but I felt it was a real shame that these cars, at the time, did not get the credit they deserved. I confess that I myself, to an extent, did not fully-appreciate them myself, since I had, as with most of my classmates in high school, grown up with a questionable view of AMC. One of my friends had a (then-new) 1970 Hornet that his parents had bought him, and, while reasonably well-asssembled, it used ultra-flimsy trim-materials inside, and drove and sounded like a mail truck.

I don't remember a great deal about how the Eagle actually drove, so I certainly couldn't write a review (especially a full-review) about it....but, what little I recall about it is that it was pretty much what one expected.....a run-of-the-mill AMC Concord with a slightly firmer suspension, slightly more body-roll from the higher center of gravity, and, of course, (although I didn't sample it in the snow) a lot better wet/winter-traction than the RWD version.

Do I wish I had actually bought/owned one? Maybe. It certainly would have made winter driving a lot easier, albeit at the expense of some engine power and gas mileage from the weight/drag of the AWD system. And it (probably) would have been a better car than my awful Chevy Citation was, which I bought around the same time....1980. All Eagles also came with standard Ziebart rustproofing and Galvanized steel body panels. But AMC, though not down to Chrysler and GM's level of poor quality control at the factory, was not known for particularly good fit/finish, and their vehicles were not known for long-term durability or longevity. And I wouldn't have wanted to be stuck with a vehicle from a company that was going out of business. So, the Eagle simply remains something for me to write about from memory, and for what it accomplished later on when its true qualities were appreciated.

My reaction in the 90s when Subaru started doing this formula was that it wouldn't go because it hadn't for AMC, but obviously that wasn't true!

Ian Schmidt said:
My reaction in the 90s when Subaru started doing this formula was that it wouldn't go because it hadn't for AMC, but obviously that wasn't true!
Click to expand...

That was also around the time when Subaru dropped its FWD products in the American market and made AWD a selling-theme....a policy it was to stick to until Subaru and Toyota both jointly-developed the rear-drive BR-Z/FR-S sports-coupe.
You must log in or register to reply here.
Share:
Reddit Pinterest Tumblr WhatsApp Email Link
Top