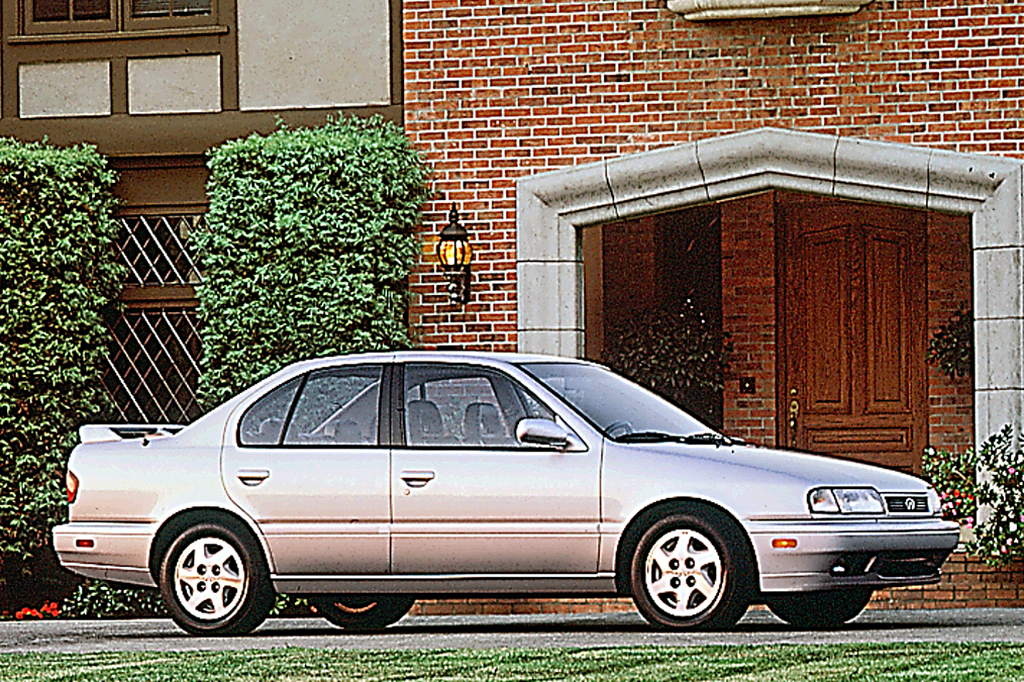 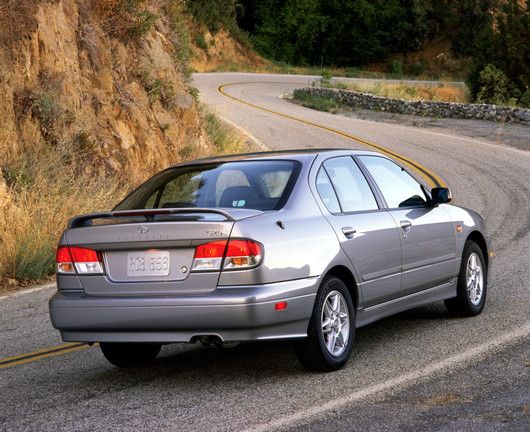 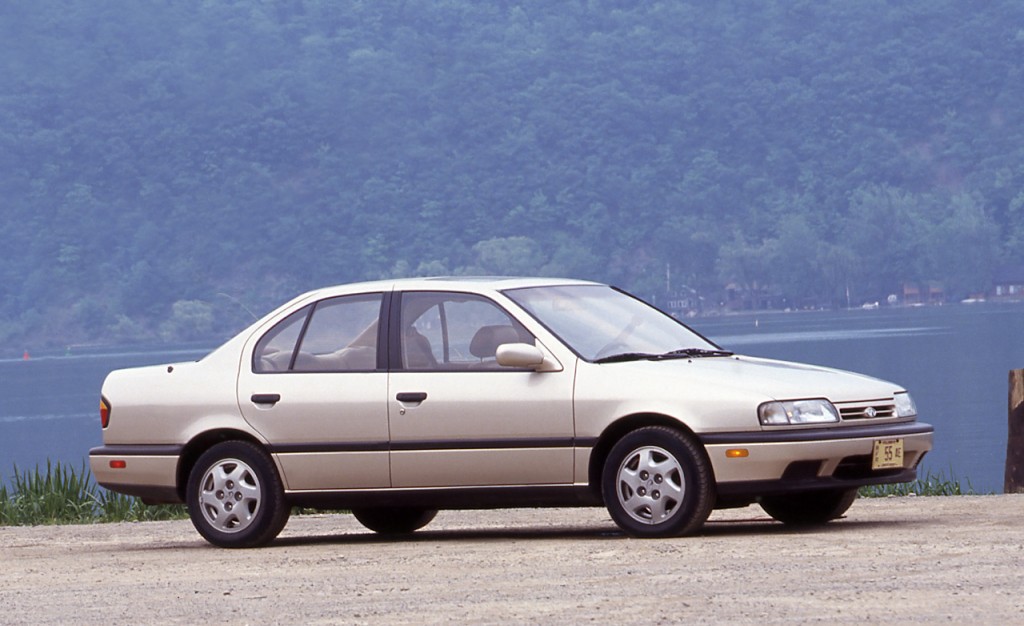 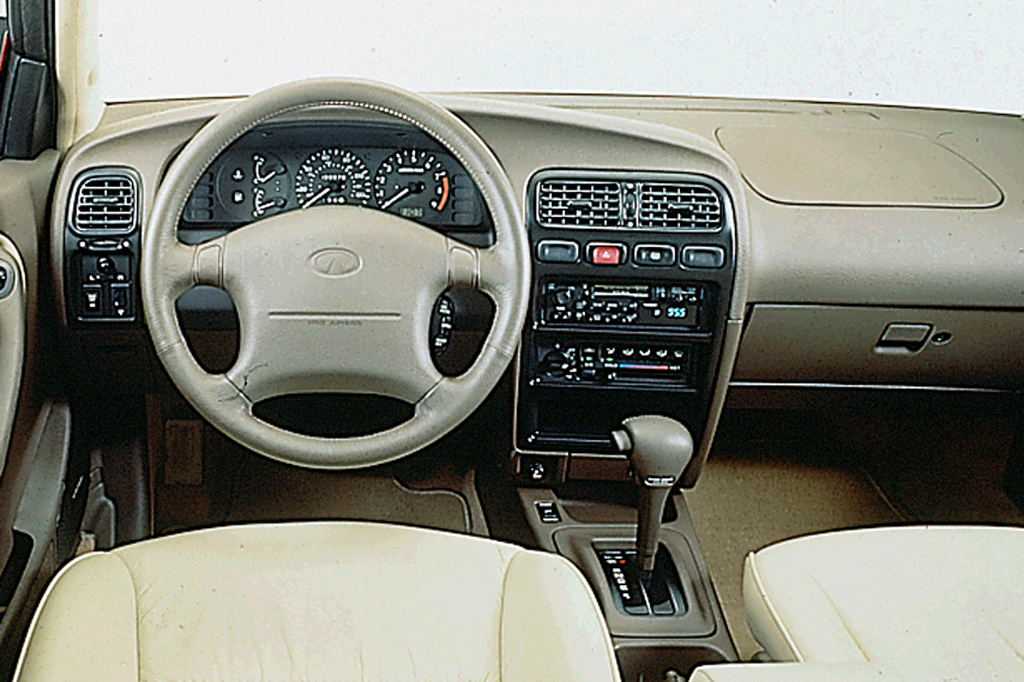 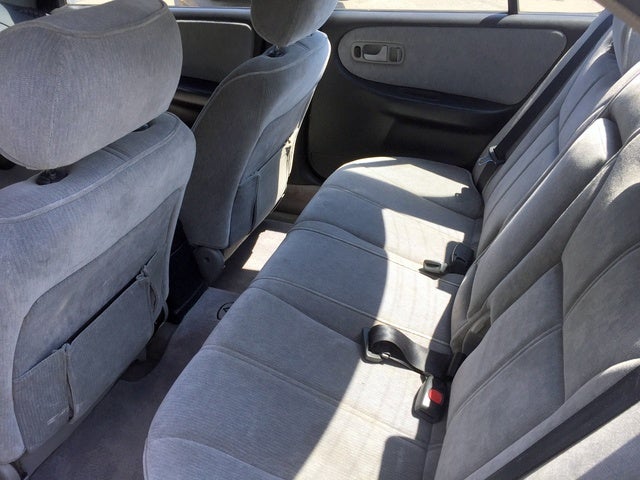 
IN A NUTSHELL: A nicely-done compact sport-luxury sedan from some of Nissan/Infiniti's best days.

I have some experience (not a lot) with the First-Generation Infiniti G20, and, although I was driving a First-Generation 1990 Mazda Protege at the time, liked the G20 enough that I actually came close to buying one. What limited experience I had with the car, though, I think, was enough for at least a brief write-up.

The first version of the G20 was introduced in the American market for the 1991 model year...only a year after Infiniti itself, as a brand (Nissan's upmarket division) started selling here in 1990. When I first saw the G20, I thought (mistakenly) that it was a slightly-expanded, upmarket/premium version of Nissan's Sentra, somewhat similar to what Lexus was doing with the initial ES250/Camry relationship. Not so. In fact, the G20 was an upmarket version of the Nissan Primavera's platform.....a sedan that was not sold in the U.S. market. The "20" part , as with many vehicle-names, came from the well-known (by then) normally-aspirated 2.0L in-line four of 140 HP and 136 ft-lbs. of torque that was also used in the hot-selling Nissan Sentra SE-R....a car well-liked by both the auto press and public.

Although at that time I was pretty much a Mazda fan (even though Ford's ownership, by then, was starting to take some of the uniqueness of Mazda's vehicles away), the first G20 was just one of those vehicles that I took an instant liking to....even more so when I saw it at the D.C. Auto Show. I liked its (IMO) handsome looks, body-styling, well-crafted and attractive interior, nice materials inside, seat comfort, gauge-layout, color-options, and a number of other features. It came standard with a 5-speed manual transmission (something that is very difficult to find nowadays) or Nissan's smooth-shifting 4-speed automatic....that automatic seemed especially smooth in the first Altimas. So, I decided, after work one day, on the way home, I'd stop at an Infiniti shop near where I was working in Rockville, Maryland, and check the car out.

Only, I was unlucky enough to get a salesman whose mental-stability I ended up questioning....this guy scared me stiff. He went and got the keys and dealer-plate for an automatic version (more automatics than manuals were usually kept in stock because of the heavy D.C.-area traffic, which was not well-conducive to a stick shift even back then. Many dealerships usually trust me enough to test-drive alone, but not this one...he insisted on taking the first part of the drive out behind the wheel himself, and then exchanging seats wth me. I said OK...after all, it was the dealership's car, not mine, and that's their prerogative. So, I got in the right front seat, adjusted the seat back/headrest/cushion, and got belted up....he does the same in the driver's seat, and adjusts the mirrors. Then, he starts the car up, with a cold engine (it was fairly cold outside, but not freezing cold), slips the gear-lever into Drive, wheels it around the lot through a couple of rows of parked vehicles, and then asks me....."Are you buckled up tight?". I tugged the belt a little tighter, and said, "Yes.....Why?" He said..."You'll find out"

I sure did find out. After we cleared a couple of rows of new cars, he turned into another double-row of cars, with a relatively clear path down the middle, points the nose of the car right toward a large brick wall at the corner of the lot......and floors it with a still-cold engine. Within a couple of seconds, he had us charging towards the wall, and I was just beginning to wonder if I was going to get back home alive. Then he jams the brakes on full, and both of us go pitching forward...fortunately, held in by the belt/restraint. We stopped maybe ten feet from the wall....or maybe even a little closer than that. I was irked (but relieved to be alive), and said "What the hell do you think you're doing?" He said..."Oh, I just wanted to show you how well these Anti-Lock brakes work". I said "Listen, this is your (the dealership's) car, and I agreed to follow the rules on the test-drive. But NO MORE of this crap...what if this car had had a problem with its brakes?".....which, admittedly, was highly unlikely on a brand-new vehicle, but not impossible, especially considering what I had seen on new Chrysler and GM products the previous decade. "From here on out, take it easy...this is not a race course." We stayed out a few more minutes, and, even though he didn't pull any more stunts like that, I just did not feel comfortable with him in the car, even when I was driving it myself on the way back. So, I (privately) decided I was not going to buy from that place, and went home.

A couple of days later, in a far nicer setting, I took out a new G20, on my own, with no one else in the car, without any fear or pressure, at the local Infiniti dealership at Tysons' Corner, VA....and drove sanely. It was a much better experience than with that overzealous guy in Maryland....I found a nice light ice-blue metallic G20 automatic, wth a light beige/Ivory cloth interior (leather was also available), and, alone, took it out at my own pace, and had a very nice test-drive. Like I said above, I was well-impressed with the car's workmanship, decent handling, adequate power, space-efficiency inside, relatively low noise level for a car of that size, and relatively good cushioning/ride-comfort over bumps for a sport-oriented sedan. The gauges were clear/easy to read, and controls easy to use. Best of all, the car was relatively affordable.....it didn't cost an arm and a leg. I went home, called up GEICO to see what insurance would run on it (I don't remember what the exact quote was), and checked Consumer Reports to see if there was any reliability data on it....too early, and not enough data yet. However, history has showed that Nissan and Infiniti built some of their best products during that period (early-mid 1990s), before serious product-cheapening and cost-cutting started several years later with the Renault ownership.

I don't remember exactly why I decided not to take a new G20 home with me (there were certainly a number of reasons).....but the fact that I had not owned my latest Mazda that long was probably one of them. Also, by then, the plastic-body Saturn S-Series cars were coming on the market, and I was equally, if not more, mesmerized with them.....and I eventually DID end up taking a Saturn SL2 home some years later. I still lament the loss of the Saturn S-series, as they were a superb and unique design, with unusual features, and customer-friendliness from the manufacturer, that has never been adequately copied by any other manufacturer.......but this is not the proper place or write-up to go into that.

The initial First-Generation G20 was built from 1991 to 1996. Then, the first model was dropped from the American market, but brought back a few years later in a new Second-Generation model, from 1999-2002. As is often the case, the Second-Generation model was a disappointment, and, IMO, was either built as well as the first model or used as nice materials, particularly inside. Overall, even though the suspension was a little more advanced, the car had a cheaper feel to it, which was more or less in line with the direction that other Nissan and Infiniti vehicles were starting to take at the time. I checked it out and test-drove it once or twice, but never had the respect for it that I did the first version. Later G-models from Infiniti, like the G25 and G35, also featured coupe and/or AWD versions.

And, as Always.....Happy Car Memories.