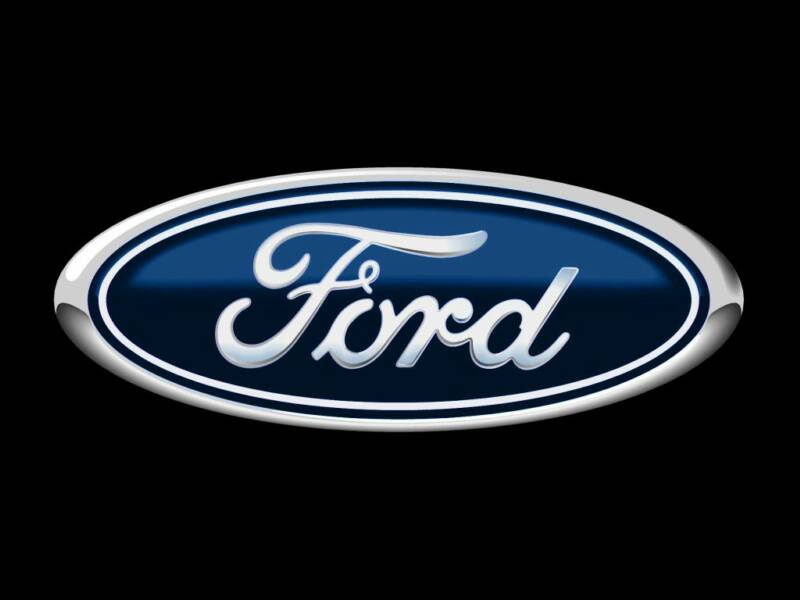 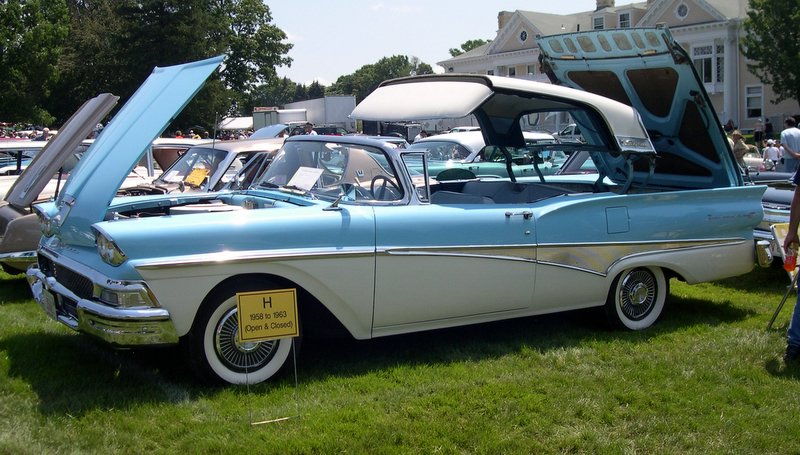 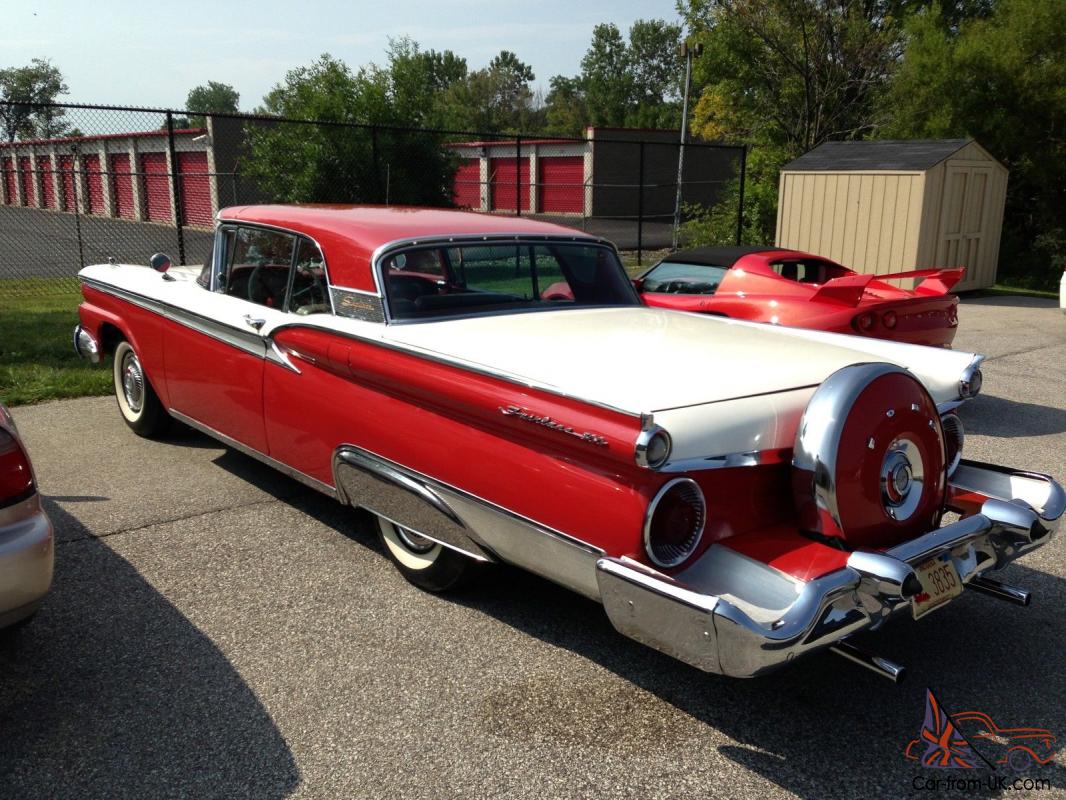 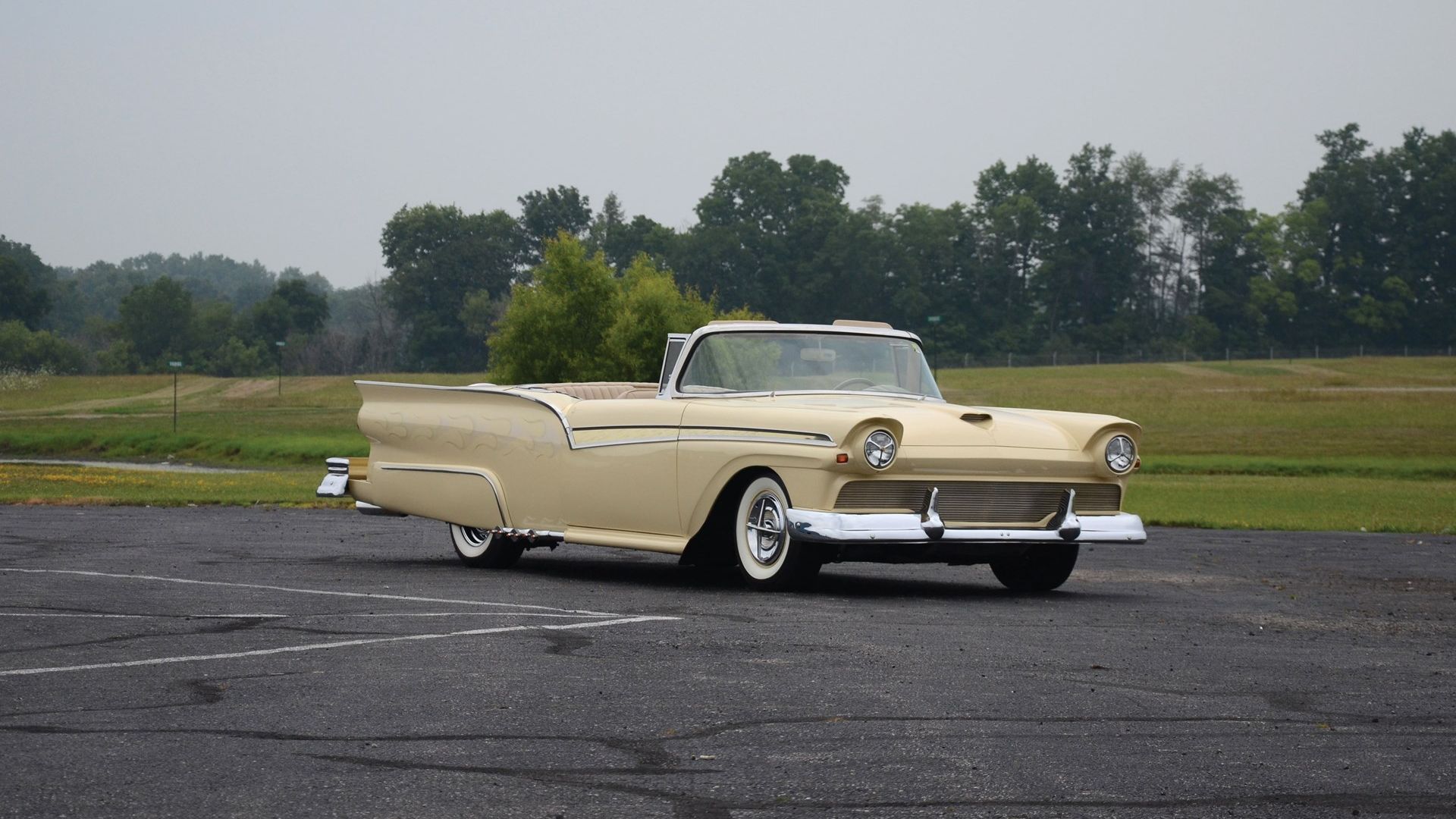 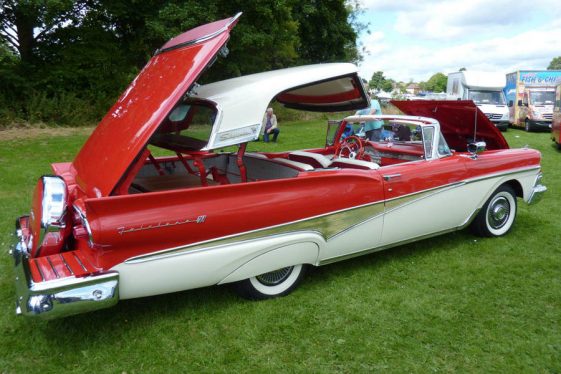 
IN A NUTSHELL: The first attempt in the American market to produce a classic retracting-hardtop convertible.

I can’t do a really long or detailed write-up of this vehicle for two reasons….First, I did not own one, and, Second, I did not test-drive one, although I did get a chance to sample one or two full-size Fords from this era on more or less the same platform. But I thought I’d write some comments and do a basic article on it, if for no other reason, because it was a very interesting concept that, while mechanically complex and (potentially) unreliable, introduced a whole new possibility to the realm of top-down motoring without the compromises of the traditional soft-top.

One of the great symbols of American automotive freedom has traditionally been the open road, light traffic, Al-Fresco/Fresh-Air, wind-in-your face experience…as long as it doesn’t blow off the wigs a lot of Baby-Boomers are wearing today LOL. Unfortunately, for many years (and, to an extent, still does with soft-top convertibles), that experience was also accompanied by cowl-flex in the vehicles’s frame because of the loss of the added stiffness of an integral top. Anyone with a sharp knife could slit the roof open and break in at will. Rear-seat and trunk room, even in those days before 4-door-convertibles were dropped, was significantly compromised because of the room needed for the hinges and framework supporting the fabric roof to fold up in storage. The fabric roof, when it was up, provided little insulation against road/wind/engine-noise, and, in many cases, not much better insulation from the weather itself. The frames had to be at least partially-stiffened with extra bracing underneath to make up for the loss of structural integrity……the added weight not only stressed the engine/drivetrain more, but, all else equal, affected acceleration, braking, handling, and steering response……which was already weakened by the chewing-gum frame-solidity. In general, top-trim interiors were not available back then in convertibles, because the thinking among auto manufacturers (with some credibility) was that classy upmarket upholstery/trim materials inside would not stand top to a lot of bright sunshine and the elements as well as cheaper base trims and/or vinyl. So, in short, the image and ownership-experience of the big classic American convertible at that time, with the open road, breeze coming in, and Marilyn Monroe or Jayne Mansfield in the front seat with you, often fell well-short of reality.

For years, the concept of a convertible-hardtop-roof had been floated in the design-departments of American automakers. By the late 1950s, at the height of the post-World-War II Age of American Automotive Excess, the designers at Ford got the OK from King Henry Ford II (he was known as “King” because of the way he ran Ford as a family fiefdom) to seriously attempt to put one into production. The result was the 1957-59 Skyliner (in early 1959, the name was changer to Sunliner).

However, like with the notorious mid-priced Edsels, which Ford also debuted roughly within the same time-period, the Starliner/Sunliner produced a lot of staring and attention from crowds, but not a lot of actual sales. Part of that, of course, was the Recession of 1958, which cost jobs/income and took some people out of the new-car market, period. Part of it was general wariness of something that was potentially complex and unreliable…the electro-mechanical actuation system, for example, used some 57 different sensors/solenoids. Ford, at that time, was not known for building the most reliable vehicles on the planet back, particularly compared to the excellent quality that the West Germans were producing after they got their postwar auto-industry back on track, which had been wrecked by bombing during the war. The retracting one-piece-roof solved some of the earlier problems that had plagued many earlier ragtop designs, but introduced other new ones. One was the aforementioned complexity. The large steel roof added even more weight to an already heavilty-burdened vehicle. The design was only available as a two-door, not a 4-door like the Lincoln Continental soft-top convertibles. The entire roof retracted into the trunk space, in one large piece, and did not fold, so the design needed a huge trunk to accomodate it…..which most 1959 full-size American cars had anyway. Once retracted, as common sense could easily imagine, there was little if any trunk space left for anything else like luggage or a spare tire. It turned out to be a potentially good idea on paper, but, like the Edsel, a flop in the actual market for those and other reasons.

As for how the Starliner drove, or its road manners, like I mentioned above, I can’t say directly because I never sampled one. However more or less equivalent conventional hardtop Fords I have sampled, like most 1950s-vintage were clearly biased towards comfort rather than steering response or handling. They were noted for flaccid suspensions, slow response, squat/dive (on already very low-slung bodies) from acceleration/braking, high-torque/Low-RPM long-stroke engines, inefficient Ford-O-Matic and Cruise-O-Matic automatic transmissions, and a tendency to squeak and rattle. On the positive side, Ford’s rust-resistance was better then average, the paint was better than that used at rival GM, and the engines had a generally good record for durability.

So, the Starliner/Sunliner, like the Edsel, was a flop, but its production (and experience) was not entirely in vain. Later, of course, auto companies, like with the 90s-vintage Mitsubishi 3000GT VR-4, came up with the idea of folding/retractable hardtops, made out of much lighter composite-materials which technology had developed by then, which folded back into the trunk taking up much less space or back seat room. But, of course, the technology for ragtops themselves was not standing still, and improvements in the quality of fabric tops, their insulation/noise-absorbent capabilities, pop-up roll-bars for added safety in roll-over accidents, and in frame-strength for cowl-flex resistance eventually won out in the end. The auto companies found that the added complexity/expense of folding hard-tops was not worth the little added benefit they added over the existing power-operated soft-tops, and, today, they have all but disappeared from the American market. In fact, only a few true convertibles themselves, like the Mazda Miata, are even left, period. Two leftover convertibles, the Fiat 124 Spyder and Buick Cascada, were recently discontinued here in the U.S. What’s left of the topless market is now mainly seen in removable-top Jeep Wranglers and the upcoming Ford Bronco/Bronco Sport.