Supposedly the Supra will have turbo four cylinder with 260 hp plus engine next year. Also the current 3.0 liter will get upgraded to 380 hp plus. Finally the Supra will get blue and matte black special edition next year as upgrades.
M

Conclusion
Although the BMW Z4 M40i and the Toyota Supra have the same platform and powertrain, their interior and exterior designs are so different that it's hard to see the relationship. Both drive and handle similarly, and our test numbers confirm how close these two cars are.

But with that in mind, we asked ourselves—is the BMW Z4 worth the nearly $16,000 difference? The Z4 M40i is a compelling package, but it's not that much better than the Supra.

Not sure we need to keep posting videos if there is no engagement. This thread looks like a YouTube feed.

I'm loving it! Thanks @Motor!

I do appreciate the videos @Motor posts here and on other threads even if I'm not posting about them.
M

"There’s more news for the 2021 Supra than just the four-cylinder, though. Toyota has upped the power output for the inline-six from 335 horsepower and 365 pound-feet of torque to 382 ponies and 368 pound-feet. You may recall those figures as the exact same numbers as the BMW Z4 M40i. Toyota claims the added power drops the 0-60 mph time from 4.1 seconds to 3.9 seconds. On top of the extra power, Toyota also re-tuned the chassis by increasing roll resistance by adding aluminum bracing in the engine bay, fitting new bump stops and tweaking the damper tuning. Additionally, Toyota re-tuned the electric power steering system, adaptive suspension, stability control and the active differential.

The last nugget of Supra news is a new special model called the A91 Edition. There will only be 1,000 sold for the 2021 model year, and they’ll be available with the inline-six engine only. The package adds a carbon fiber lip spoiler, matte black wheels, C-pillar graphics, carbon fiber mirror caps, and a two-tone black and blue Alcantara interior. It’ll be available in two colors: Nocturnal black or Refraction blue. The latter is exclusive to the A91 Edition." 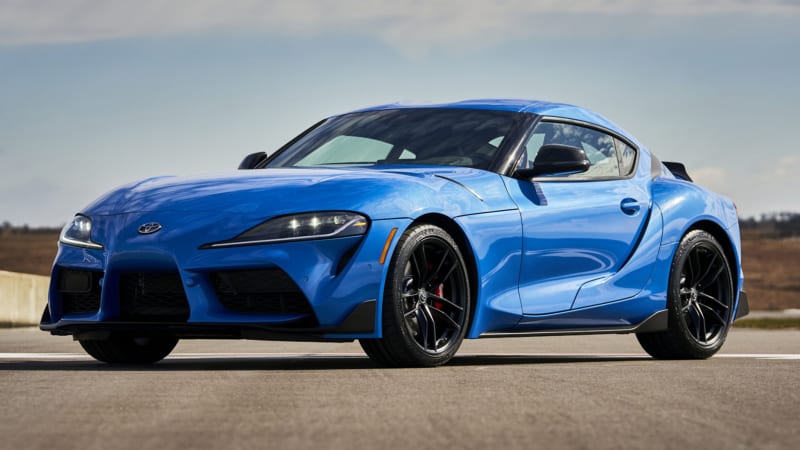 The 2021 Toyota Supra brings big updates to the sports car including a new four-cylinder model, a more powerful six, and an A91 special edition.


What will be interesting is to see if there are any changes on the dyno for the 2021, or if Toyota is just being more honest in the HP rating now.

However, seeing the substantial list of other improvements is very encouraging. I'm wanting/liking this car more and more as time goes on.