Lexus Shuts Down Most Manufacturing Around the World 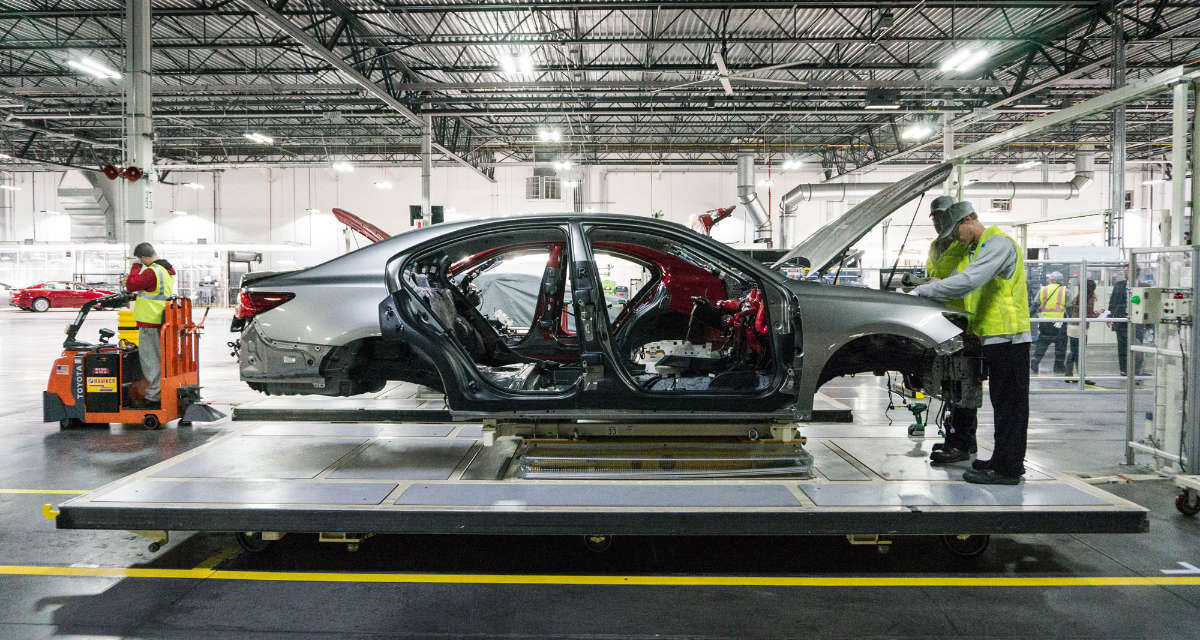 The Lexus USA Newsroom informs us that the current production stoppage of Lexus models built in North America (ES in Georgetown, Kentucky, USA and RX in Cambridge, Ontario, Canada) will be extended by another 2 weeks, until May 3.

With the plants down and rumors of the GS going away, I wonder would they make anymore

mikeavelli said:
With the plants down and rumors of the GS going away, I wonder would they make anymore
Click to expand...

Ironically, the Motomachi plant now making the GS is the only one that currently isn't down.

Joaquin Ruhi said:
Ironically, the Motomachi plant now making the GS is the only one that currently isn't down.
Click to expand...

"It's a pandemic".
"We still have parts for the GS left, just finish it off and kill the line."
"Shouldn't we send people home?"
"You heard what I said."

Joaquin Ruhi said:
Ironically, the Motomachi plant now making the GS is the only one that currently isn't down.
Click to expand...

I heard it was from someone in Japan. Seems someone in that plant had COVID-19...

Toyota Motor on Friday said it was halting production at five plants in Japan in response to a sharp fall in overseas demand due to the global COVID19 coronavirus pandemic.
www.just-auto.com

mikeavelli said:
I heard it was from someone in Japan. Seems someone in that plant had COVID-19...
Click to expand...

A Toyota Global Newsroom release admits this is true, but it wasn't sufficient cause to shut down the entire plant. Here's the full story:

Apr. 04, 2020
Statement on Reported COVID-19 Infection at Toyota Work Site in Japan
Today, Toyota confirmed that a male, full-time employee in his 20s working as a line worker at its Motomachi Plant in Toyota City, Aichi Prefecture, Japan has tested positive for COVID-19. The employee in question developed a fever on Monday, March 30, and, on April 2, the employee was transported by ambulance to a hospital in Toyota City, at which he underwent a COVID-19 virus test. The test returned positive today. The employee is currently hospitalized.

The employee, who used two paid holidays on March 26 and 27 to visit his family in Tokyo from March 26 to 29, including a two-day weekend, last reported to work on March 25. As such, there was no occasion for the employee to have close contact with other employees in his workplace after developing a fever. However, two employees who share common space in the dormitory at which the employee lives have been asked to stay home for 14 days from the date of their last contact. Toyota also immediately and thoroughly disinfected the affected work sites on April 2 and resumed operation shortly afterwards.

We sincerely apologize for any anxiety or concern that this news might cause people in the immediate and surrounding regions. We are treating this as an issue that affects all locations and will further enhance our communication with staff at all locations, including about how to spend time off away from work and to be aware of the state of their health, to prevent the spread of COVID-19. We will do our best to provide timely updates as the situation progresses and will implement measures to prevent the further spread of the virus.

I hope everyone is ok and positive results are minimal

As automakers and suppliers prepare to restart North American production over the coming weeks, they'll have more to worry about than just how to keep their parts supplies coming and how to keep their factories sanitized.

Among them: When the nation and the world are flying by the seat of their pants trying to deal with a deadly new virus, what is an employer's liability exposure if something goes wrong?

Attorney Chris Reynolds — who also happens to be head of manufacturing for Toyota Motor North America — says the industry as well as other employers are about to discover the answer to that question.

"What is the liability standard for a situation that is unprecedented? We will surely find out," Reynolds said as he laid out plans Thursday, April 23, for Toyota's plants in the United States and Canada to return to limited production beginning May 4.

"Nobody has a good fix on it, if I put my legal hat on. But what our legal department and our health and safety groups are doing is, they are very carefully looking at the county-by-county, state-by-state and federal guidelines that apply to things like essential business activities; what that means, how people can undertake them and how people can comply with whatever guidelines apply to a given location."

Reynolds said it can "sometimes require a lawyerly examination" of those guidelines, especially in cases where they might conflict. And in such cases, employers might find themselves exposed.

While its production across the U.S. and Canada has been suspended since March 23, and its roughly 29,000 production workers have been idled, Toyota has recorded 24 cases of COVID-19 infection among its work force, Reynolds said, including 13 individuals who have fully recovered.

Reynolds said despite taking huge steps to improve worker safety on the job and limit exposure among employees, it's not realistic to assume there won't be more cases.

"That number is going to change. This is not a situation where we expect zero cases. We just have to be realistic," Reynolds said. He noted that Toyota plants in China and France have already returned to operations. "Believe me, we've been avidly following what they've been doing and how effective it is. We're not letting that go to waste at all."

The automaker has developed a best practices handbook to guide its return to production and is complying with the advice distributed by public health officials, Reynolds said.

While the automaker has sufficient stores of parts on hand to start building vehicles once workers return to plants, Reynolds said Toyota would take time "to shake off the rust" with workers who haven't been on the job in more than a month, and to implement and train workers in extensive new safety procedures that will both slow the run rates of assembly lines and hopefully help keep them safe.

"I would be surprised if a car rolls off a line anywhere on May 4," Reynolds told reporters last week.

The new procedures — including staggering entrance and exit times to avoid crowding, altering workspaces to allow workers to be separate from one another and placing physical barriers to separate workers in close proximity — "are going to take some time, and we're going to take the time."

The Lexus USA Newsroom informs us that the current production stoppage of Lexus models built in North America (ES in Georgetown, Kentucky, USA and RX in Cambridge, Ontario, Canada) will be extended yet again, until May 10.
You must log in or register to reply here.
Share:
Reddit Pinterest Tumblr WhatsApp Email Link
Top