Joaquin Ruhi said:
In the case of the outside rearview cameras in lieu of mirrors, part of the problem is that they are still illegal in the United States. The laws as written require an actual, physical mirror. Both Audi (whose outside cameras in the upcoming e-tron SUV are also banned here) and Lexus have petitioned NHTSA for a change in the laws, but they don't seem to be coming anytime soon.
Click to expand...

F1 Silver Arrows said:
Will close this up, but if the LS dies out of all the cars in their lineup, I actually cannot believe I would say this, but... well... Lexus would be dead to me. And they would be dead overall. Chasing sales (by abusing the ES and RX to death) won't save them forever when they have a sh*tty image as a luxury car company by killing off the one who started it all. By doing this you're no better than Acura. In fact, I would get a RLX Sport Hybrid to be spiteful.

I be very frank I never thought we would even FATHOM of talking about something like this. It's like saying Lamborghini losing the V12, BMW killing off the 3 series, Rolls-Royce killing off the Phantom or Mercedes-Benz never having an S-Class again. These are topics that never exist. The fact that just one of us even uttered something like this IS CRYSTAL CLEAR that Lexus is genuinely f*cking this up. Sorry. That's the sad truth.
Click to expand...

uh, why would LS die? And why is making a better ES and RX, abusing them?
S

Either full lineup as the German 3

Or Luxury sport lineup as Jaguar/Porsche/Maserati

Or the third will be another Acura/Infiniti/Lincoln/Cadillac

And stuck to this formula forever , they will then gain a lot of momentum by pushing themselves to this model a niche but with affordable price

Now they are failed in the full lineup model and they are starting to be taking ***/USA luxury failed model
Click to expand...

Lexus sells 12 vehicles worldwide, it is already a full lineup manufacturer... Rest of your post makes no sense, why would Lexus kill its successful vehicles and become small niche manufacturer?
S

F1 Silver Arrows said:
The fact that just one of us even uttered something like this IS CRYSTAL CLEAR that Lexus is genuinely f*cking this up. Sorry. That's the sad truth.
Click to expand...

Here is hoping that the LS+ would become the true prestige program Lexus should have had in the first place.

Anyway here is the end of the digression.

spwolf said:
Lexus sells 12 vehicles worldwide, it is already a full lineup manufacturer... Rest of your post makes no sense, why would Lexus kill its successful vehicles and become small niche manufacturer?
Click to expand...

Because in this current model they are becoming just Toyotas with good interior materials, and that's not what Lexus role when it was firstly created

Honestly now Lexus harm both Lexus and Toyota, they're harming themselves by not seen as premium and just another Toyota, and they're harming Toyota by not letting them putting better material with better fit and finish as the fear it will intersect with Lexus

Imagine the UX, NX, RX, ES as the top line of the CH-R, RAV4, Highlander, Avalon not design wise or even design wise I mean but fit and finish/ material with less 5k MSRP , Toyota will make and earthquake to the market

That's what I am saying, keep Lexus totally away from Toyota even if you need to merge the RWD Toyotas inside Lexus lineup

Not a single intersection you are freely put AWD in any but it will not be always the same
Last edited: Oct 31, 2018

This thread wandered so much I had to look and see what the original topic was!

I think right now it's just a bit of a mad dash to get everything on TNGA, coming out of the "lost decade". What they do after that is when you can start pulling your hair out, or not. I'm talking about the next LS refresh, the production LF-1, stuff like that.

BTW: a positive tech feature that's new in the LS500 that I noticed recently is that if the wipers are on for more than like 30 seconds the car automatically turns on the headlights. Just one of those nice little touches that let you know someone was thoughtful.

Agree we are far from the main topic and I apologise but honestly it frustrates me to hear from every single car reviewer that overall Avalon is the sporty and ES is the luxury, this wasn't suppose to happen, especially if they want the ES to take the place of the super handling GS

Reasonable enough in price, though I'm not impressed with the placement of the screens -- takes up a lot of the dash and clutters everything up. Thing is, I can't really imagine an alternative solution.

(Well actually I can, but it would involve transforming the entire instrument panel. Maybe once these digital monitors are no longer optional.)

I think the right solution for digital side mirrors is probably as part of a HUD, but those are too expensive to use widely right now.
W

Reminds me of those dinky little pods that Japanese cars had for blind spot monitoring back in the early 2000's when the tech was still new. 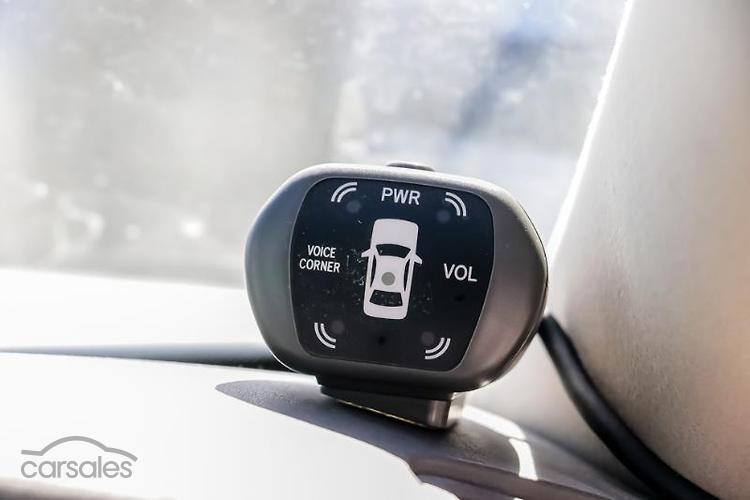 Regarding the screens I think we will see it well indicated within the dash from the next car , whatever which car it will be

Ian Schmidt said:
I think the right solution for digital side mirrors is probably as part of a HUD, but those are too expensive to use widely right now.
Click to expand...

I don't know about using the HUD, as it would be visually distracting to see two moving images directly in your line of sight at all times. I'm picturing something more like the LF-FC setup, with segmented screens to left and right of the IP.

As a sidenote, boy oh boy do I still love this interior.

You're right, that's an even better place to put the mirror displays.

And that *is* still a great interior.

Joaquin Ruhi said:
In the case of the outside rearview cameras in lieu of mirrors, part of the problem is that they are still illegal in the United States. The laws as written require an actual, physical mirror. Both Audi (whose outside cameras in the upcoming e-tron SUV are also banned here) and Lexus have petitioned NHTSA for a change in the laws, but they don't seem to be coming anytime soon.
Click to expand...

WASHINGTON (Reuters) - The U.S. National Highway Traffic Safety Administration plans to test how drivers could use cameras to replace traditional rearview mirrors in automobiles, a technology already allowed in other countries, the agency said on Tuesday.

The planned test by the agency known as NHTSA would examine “driving behavior and lane change maneuver execution” in cars with traditional mirrors and camera-based visibility systems, the department said in a notice offering the public a chance to comment.

In March 2014, the Alliance of Automobile Manufacturers — a trade group representing General Motors Co, Volkswagen AG, Toyota Motor Corp and others, along with Tesla Inc, petitioned NHTSA to use camera-based rear or side-vision systems. A similar petition was filed by Daimler AG in 2015 seeking approval for camera use instead of rearview mirrors in heavy-duty trucks. Those petitions are still pending.

NHTSA said in a report last year it was still studying the issue. The new testing would initially focus on passenger vehicles and later on larger vehicles.

Auto manufacturers have commonly added front and rear cameras to assist with maneuvers like parking, but some are now adding side cameras to provide visibility without traditional mirrors in other markets.

Both sell versions in the United States with traditional mirrors.

Honda Motor Co Ltd will have the technology standard on its Honda e when the model goes on sale in Europe later this year or early next year, a spokeswoman said.

The technology is already approved in Europe and Japan.

Mirrorless systems are “an example of where automotive technology is ahead of the legislative curve” in the United States, said Mark Dahncke, an Audi of America spokesman.

The test comes as automakers are investing in technology and autonomous driving capability.

Tesla said in October it had made all eight external cameras on its Model S, Model X and Model 3 cars active, providing a “360-degree visualization of surrounding vehicles,” though the cars still have traditional mirrors.

There's a bit more movement as NHTSA opens a 60-day comment period on amending Federal motor vehicle safety standard (FMVSS) No. 111 to allow for outside rearview cameras instead of mirrors. Here's the latest:

WASHINGTON -- Drivers in the U.S. may one day no longer have to crane their necks to check their blind spots if regulators agree to let high-tech cameras and screens replace the humble side-view mirror.

The National Highway Traffic Safety Administration said in a notice on Wednesday that it is seeking public and industry input on whether to allow so-called camera monitoring systems to replace rear- and side-view mirrors mandated by a longstanding U.S. auto safety standard.

Tesla Inc. and the Alliance of Automobile Manufacturers in 2014 petitioned the agency to allow cameras to be used in lieu of traditional mirrors, citing improved fuel economy through reduced aerodynamic drag as the primary benefit. Cameras feeding one or more displays inside the car could also improve rear and side visibility, the Auto Alliance has said.

Toyota Motor Corp.'s Lexus brand rolled out the technology last year on the ES sedan in Japan and is reviewing feedback from drivers about the feature.

Mirrorless cars -- or vehicles that drop old-school glass mirrors in favor of video screens -- have long been proposed by stylists and engineers wanting sleeker looks and improved safety. They can also help improve a vehicle's fuel efficiency because the camera setups have lower wind resistance.

But NHTSA, which has been studying the possibility for more than a decade, says camera monitoring systems may also introduce new safety risks. A five-year agency study of the technology on heavy-duty vehicles found display screens were too bright, making it harder for drivers to see objects on the road ahead.

NHTSA’s 2017 tests of a prototype camera monitoring system found it was “generally usable” in most situations, and produced better-quality images than mirrors at dusk and dawn. It also found potential flaws, including displays that were too bright at night, distorted images and camera lenses that would become obscured by raindrops.

NHTSA said in a notice in the online Federal Register is seeking outside research and data about the potential safety impacts of replacing mirrors with cameras to inform a possible proposal to alter the mirror requirement in the future.

The comment period will be active for 60 days after the notice is formally published in the Federal Register (from Thursday 10 October thru Monday 9 December 2019). The agency didn’t offer a timeline for a final decision, but changes to auto safety standards typically take years.
Click to expand...