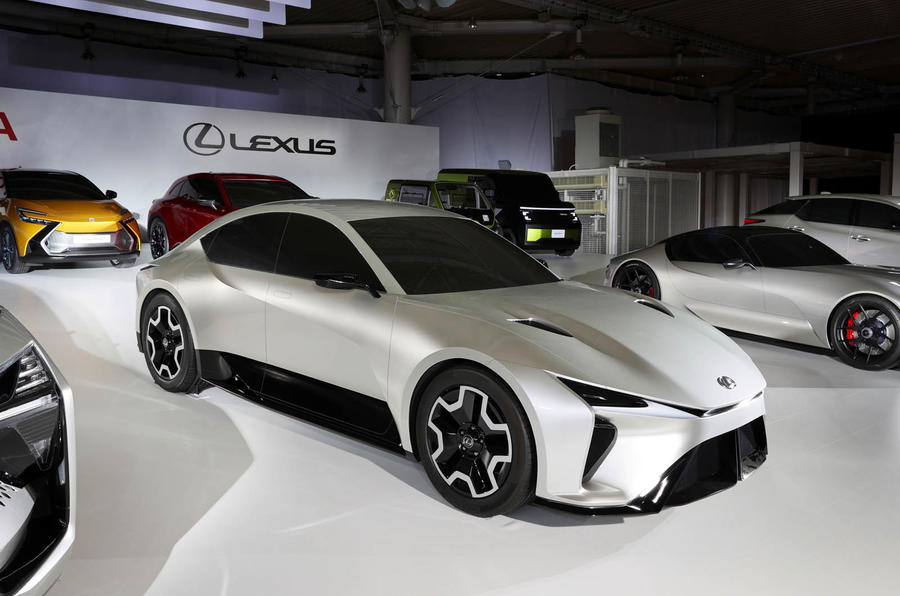 Like the LFA inspired supercar, initial reaction is that the spindle grill is completely dead. There are going to be two camps on this one, those are going to be losing their mind with excitement that Lexus is taking a more elegant approach with this conservative front end and those who will feel the brand identity has been lost.

Although I love the LC and loved the LF-FC, I do feel this sedan and the LFA inspired EV look fantastic. 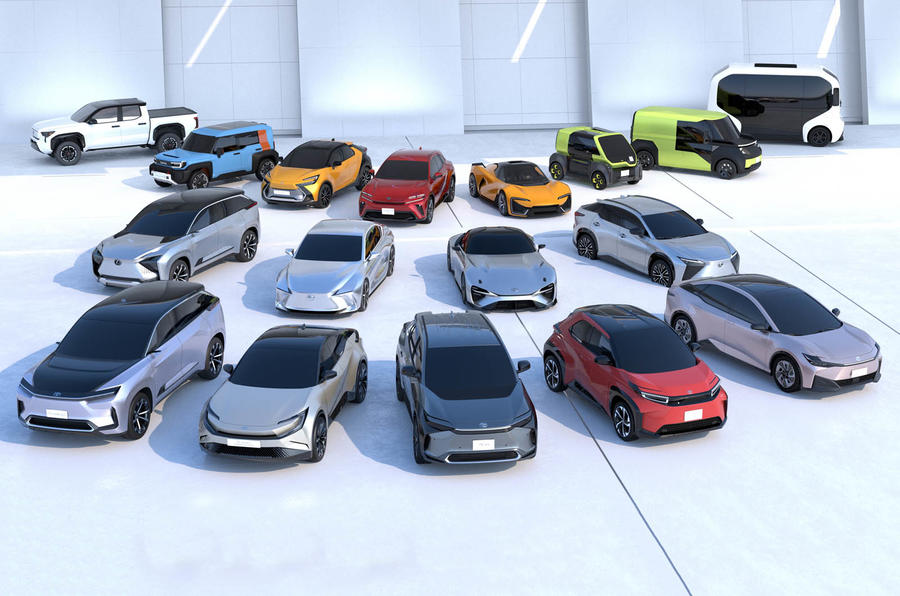 Interestingly, you can see from this CGI image that they have also revealed that the sedan had a completely different front end originally, with seemingly a decision to move to the more conservative front end at this full size clay-model stage.
I

This compact sedan BEV is something I look forward to.

Hmm. Makes me wonder, is this going to be the next-generation IS or will there still be a Mazda-based variant first AND THEN a full BEV IS? Either way, it looks great!
S

Did they say these were BEV or electrified vehicles?
L 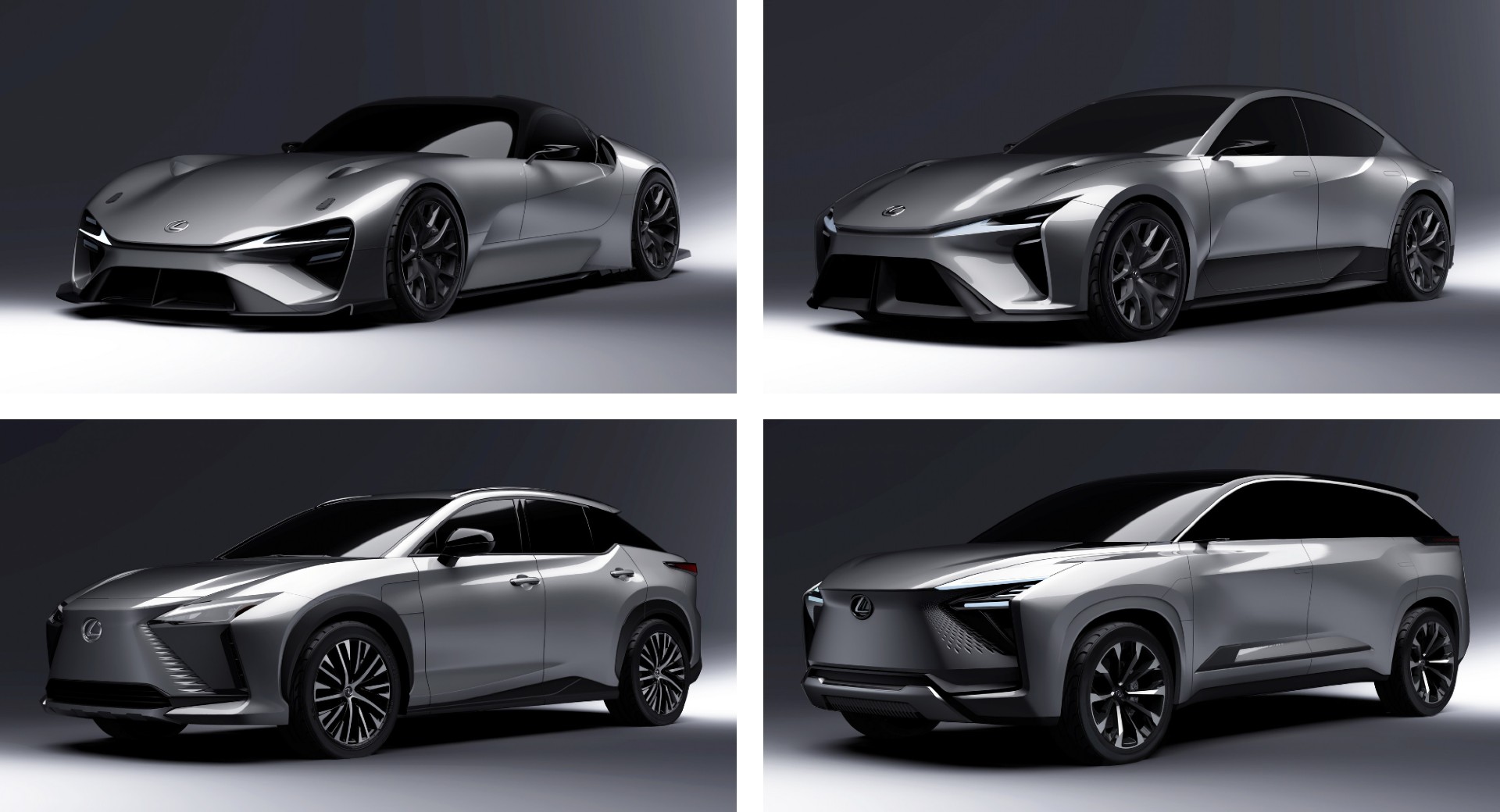 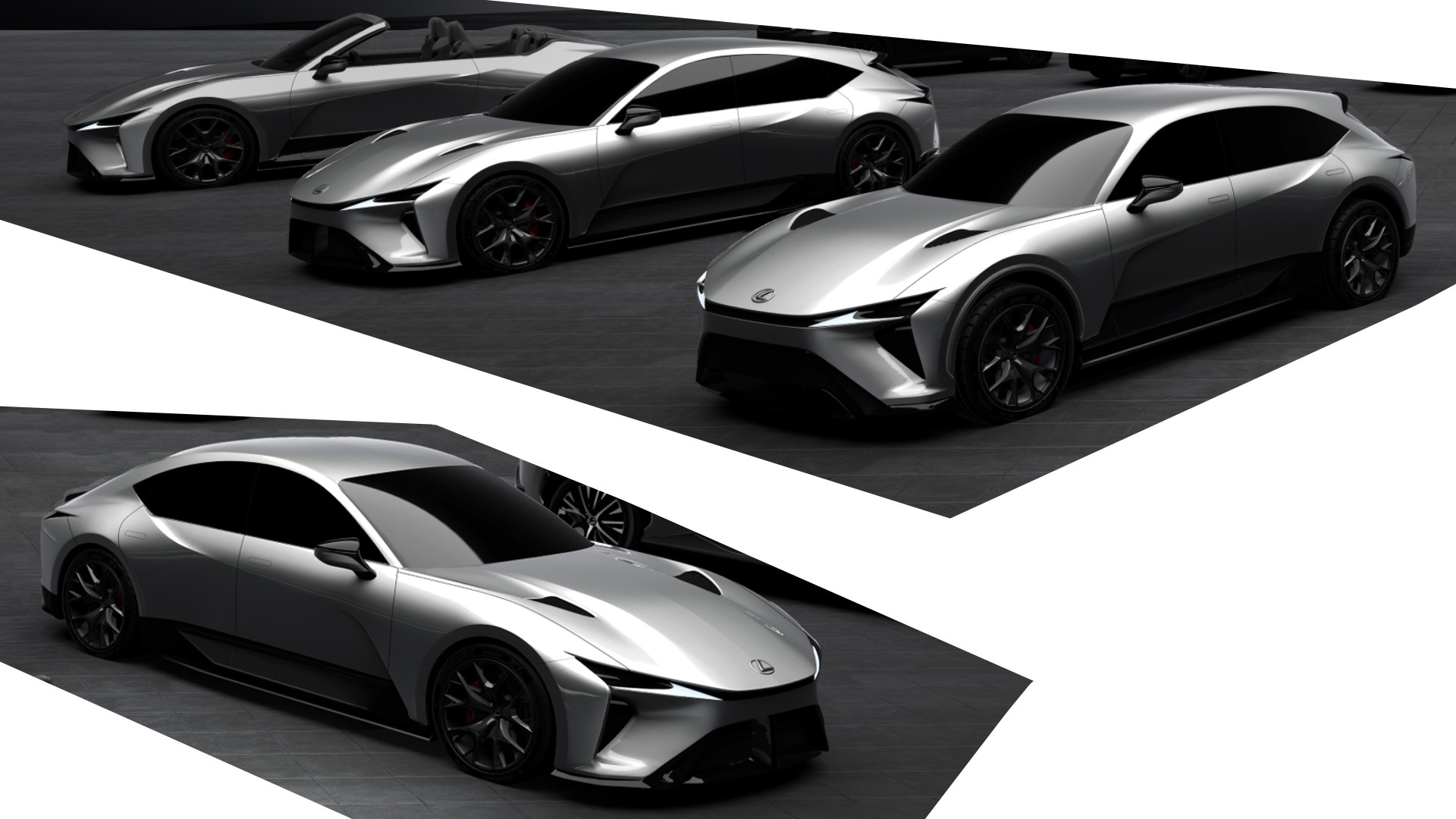 Finally, Lexus showed a mysterious low-slung four-door sedan with an aerodynamic silhouette and aggressive styling cues inspired by their sportscar. Despite the fact that a full-scale prototype was parked in the presentation hall, Akio Toyoda didn’t mention much about it. However, looking closer to the official rendering of the Lexus future EV range we can see additional variants of the same car.

More specifically, there is a five-door shooting brake bodystyle, a very similar-looking and slightly raised crossover, and a two-door four-seater convertible. All of them are sharing the same design for the front end creating a family look. They will likely sit on the e-TNGA platform but judging from the sporty styling we should expect increased power outputs and a focus on driving dynamics.

Yes it all looks very nice, however there is one vehicle which doesn't appear in concept form anywhere - LS.
S 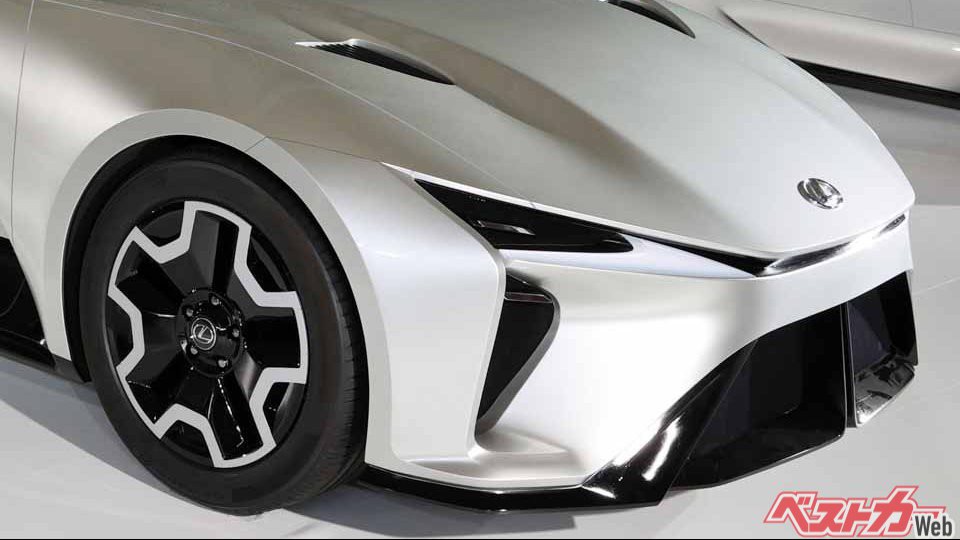 The "Battery EV Information Session" was held in December 2021 and was sent by President Akio Toyoda himself. 16 concept cars were released at once to appeal that Toyota's EV strategy is serious, but of course not all the concept cars shown here will appear as they are. And, of course, not all the models here are dream stories. To put it more clearly, "some models come out almost as they are." Toyota officials confess that there are two models. Of the models exhibited there, two will come out with almost the same design. One is a bZ Compact SUV. The identity will be the next model of the current C-HR. And the other one is ... the next Lexus IS? ?? ??


◾ The next Lexus IS, which Toyota officials thought, "Can I show this?"​

Among the 16 concept cars that were unveiled at the "Battery EV Information Session," Toyota officials wondered, "Can I show this?" The Lexus brand Lexus Electrified Sedan. ). It is one of the four Lexus brand models released this time.

The Lexus Electrified Sedan was unveiled at the "Battery EV Information Session" in December 2021. The next IS will be released with almost the same design

Among the public models of the Lexus brand, it has already been revealed that the "RZ" will be on the market in 2022, and it will appear as an EV model of the current RX series.

At the same recital, Lexus has announced that it will use its advancedness as an EV brand as a weapon by 2035, but among them, compact SUV and UX are already part of the grade although it is not an EV dedicated platform. The EV model has already been introduced (UX300e). Next, this RZ centered on North America will appear.

And next is this Lexus Electrified Sedan. This is the next IS. The debut is in 2025, three years later.

Speaking of IS, the FR model that can be said to be the only domestically produced vehicle that can compete with the mid-sized saloon army in Europe, such as the BMW 3 Series and Audi A4. Following a big minor change in March 2021, in July of the same year, the IS F equipped with a V8 and 5-liter engine was revived for the North American market, limited to 500 units.

In the first place, this IS was scheduled to undergo a full model change by 2022. It is said that it was planned for a long time to extend the life of it until 2025 and to make it EV. That is to say, the EV branding of Lexus has been a decision for a long time, and it is also a proof that Toyota did not rush to take the EV route backwards to EV.

Looking at the design of the Lexus Electrified Sedan again, the whole form clearly has the image of IS, and the front area also expresses the new Lexus EV in the future like the RZ.

When the new Lexus IS debuts in 2025, as with overseas brand EV models, there will be many variations, including FR or 4WD, sports grade due to differences in motor output and cruising range, etc. , Lexus will make a big turn toward EV.

As mentioned above, the next IS will be an EV sedan. I want an IS, which is a high-quality FR sports sedan with pure gasoline specifications! That means that you need to aim for the current model.

I really am looking forward to one of these. Preferably with solid state batteries.
N

I like the design, but cant help everyone and their cousin are going to launch EVs that basically have the aerodynamic design and profile of a Panamera.

NXracer said:
I like the design, but cant help everyone and their cousin are going to launch EVs that basically have the aerodynamic design and profile of a Panamera.
Click to expand...

There is the wagon in case sedan is too panamera-ish.
N 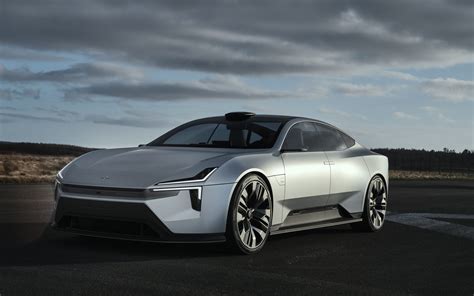 I will need/want a new car soon. Regardless of finances, where I am and in my position, I am fine and find it more judicious to wait for 2025. For one, there will be a better indication if BEV is the future only, or part of the future, (try arguing with pro BEVs that sales won't be exponential). Should I have to get a BEV it will be IS (sedan or wagon) or CH-R. In ICEV category, there is the coming Mazda 6 and the next Crown/ES for choice (both AWD too).

I really like this (as I already to like the CHR, more than UX): nice grill-less front design, short front overhang, door mounted side mirrors, overall low, looks production ready or close to final... 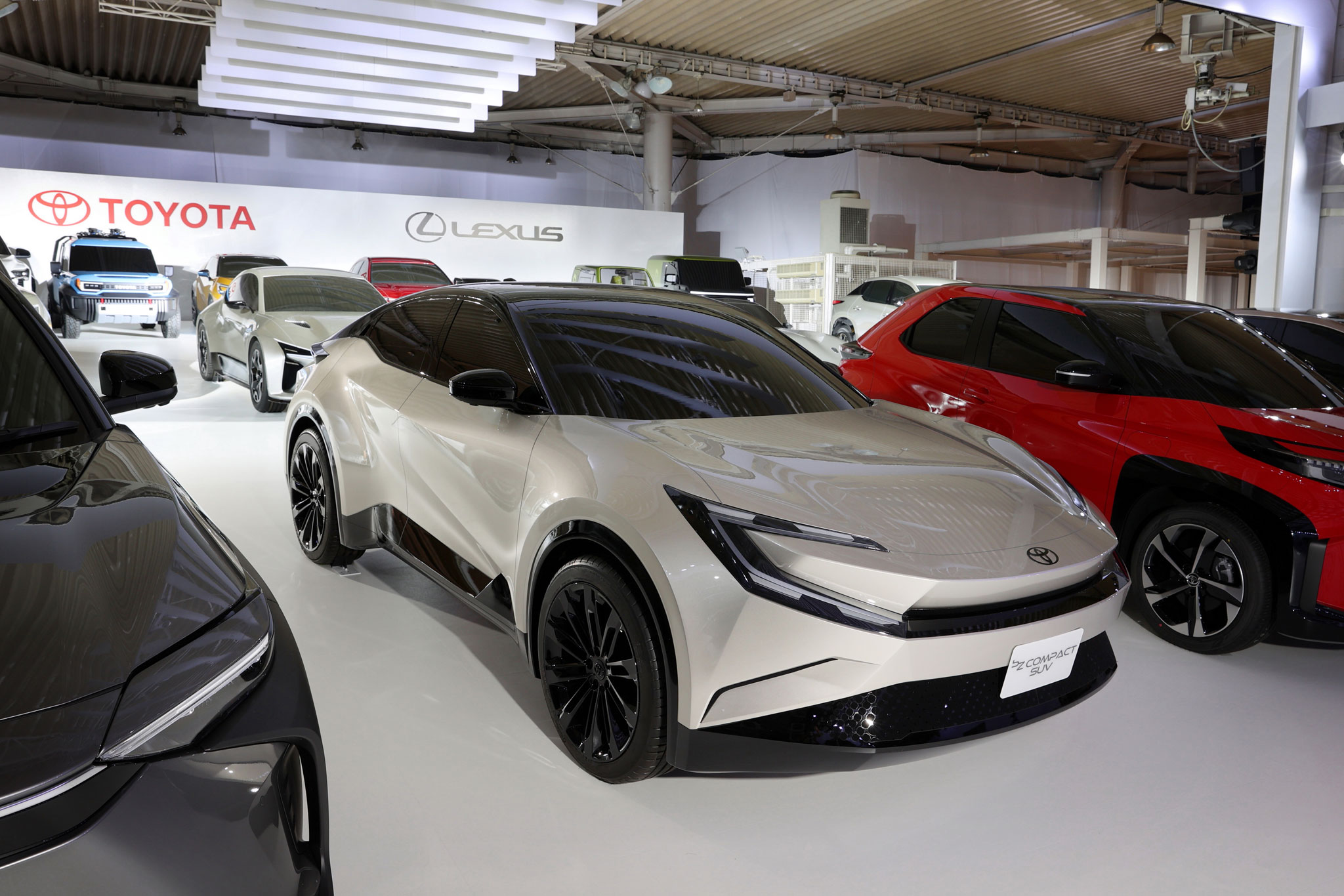 With Yaris Cross and Corolla Cross, Toyota will have it hard to justify the high sales price of CH-R against two cheaper and more practical alternatives. While the bZ4X is the electric RAV4 alternative, making CH-R a BEV makes alot of sense in the meantime while ICEVs are yet on sale. I hope they'll still give it something closer to 200 HP rather than 150 HP, and also make it AWD.
Last edited: Jan 22, 2022

Looks so good, can't wait for the 4th gen IS! Also... they call it Electrified Sedan rather than Electric Sedan.. possibility of the next gens having PHEV instead of just full BEV?

First view of the rear. ES = Electrified Sedan? This looks still very short, more like IS.


Gor134 said:
Looks so good, can't wait for the 4th gen IS! Also... they call it Electrified Sedan rather than Electric Sedan.. possibility of the next gens having PHEV instead of just full BEV?

Lexus/Toyota being deliberately vague to be able to shift depending on market evolution/condition without having to come up with dumb excuses/justifications? If car companies cannot become 100% electric but have no more ICEVs, what are they going to say to their shareholders? Lexus can go full electric because sales of Lexus are rather low on the larger scale, having a few PHEVs for some will be like BOF SUVs for some now.