mikeavelli said:
No, the vast majority of current owners bought it at 25-30k. That’s barely a new Corolla. They are not in the market. There are a couple guys that told me they are but they are a different IS F owner. What I’ve seen is most talking crap about the 500. It’s sad.
Click to expand...

That's straight up sunk cost fallacy. Even worse, they're not helping out overall - V8 powered sedans have mostly disappeared except in the lineup of less than a handful of manufacturers. It should be in their interest to support Lexus' efforts to keep cars like these alive, even if they're not buying one.

GNS said:
That's straight up sunk cost fallacy. Even worse, they're not helping out overall - V8 powered sedans have mostly disappeared except in the lineup of less than a handful of manufacturers. It should be in their interest to support Lexus' efforts to keep cars like these alive, even if they're not buying one.
Click to expand...

Agreed. The attitude is pretty disgusting. Many even slander the LC and RC F and GS F. When a car is 25k you get that mentality.

If anyone remembers in 2008 the IS F was cool and an awesome product but got its ass kicked in every review. And people made fun of the hood and the vents and the tailpipes and white carbon trim. It drove so harsh your teeth shattered. The ride was bumpy. Many of you here and myself defended the car. We saw the IS F as family. 13 years later a lot of these new IS F owners just bash anything not an IS F. They don’t really understand the history. They would not have bought it new back then af 65k. Hell I even paid for the IS F driving course here in Atlanta.

Imagine in 2014 it sold so poorly even after substantial improvements they only sold 85 or so. 85!

The fact is if the IS F did come with a new engine they can’t buy it. A new M3/M4 is 75k-110k. An IS F would be similar. They would buy it 10 years from now and it’s irrelevant. This will be a key and cool part of the IS 500. It will be relatively more accessible since it’s not a full blown F. We can add brakes, oil coolers etc. We can’t really add an engine. We got the core heart and it comes standard with the RC F tranny and LSD!

The IS F is still cool (hell I’m shopping for one) but an old legacy product. And people buying them for 20-35k are irrelevant to the conversation when a new base UX is 35k. So you aren’t really a Lexus customer within that price range. That is where they sell Toyota’s. I think one should be a bit more humble.

I try my best to bring this community together and Lexus has been amazing with support as of late. We all should welcome an old school IS 500 even with its imperfections in a world where most everything not Mopar downsizes to a 4 or 6 cylinder with boost or is going BEV. The thought of a photoshoot with an IS F and IS 500 excites me. I welcome and will love both.

mikeavelli said:
Many of you here and myself defended the car. We saw the IS F as family.
Click to expand...

bogglo said:
With the IS 500 going on sale soon, do you think it will affect the used market value of the IS F?
Click to expand...

Not really. They're two totally different price points and different buyers. A buyer of a 2022 IS 500 F SPORT is not in a market for a 13 year old car, sorry to say.
C

Lmao, those loud and opinionated keyboard warriors always complain about this and that, but at the end of the day they will never buy a new car, only used piles that have depreciated heavily, they do car manufacturers absolutely no favours at all yet they have the audacity to talk crap about new cars, and not just any new car but new cars that are actually really good. Seriously what's the problem with those kinds of people?

Sadly this IS500 wasn't going to be for me either way, but Lexus screwed all of us Europeans 🤣

We had that 2nd facelift CT but we're missing this beauty, doesn't feel fair to me!

Brought it by my dealer Hennessy Lexus of Gwinnett and they loved it!

From 2:31 he has some info on the IS500, hoping they are just being conservative with the timeline PLANO, Texas (September 10, 2021) –The 2021 Lexus IS launched with a slew of design and handling enhancements, making it the best IS to date. It was also designed with the Lexus Driving Signature philosophy under rigorous testing and evaluation at Toyota Technical Center Shimoyama. For many...

Obviously I’ll have a ton more but here is a hot lap I had yesterday with Townsend Bell going 10/10 in the IS 500. I’m still grinning.

This should answer the question above. In a straight line, it is quite close to the RCF to the 1/4 mile (I had predicted that). About a couple of tenths slower in a straight line. However, at higher speeds at 130 mph, RCF gets there half a second quicker in 17.0 seconds vs 17.5 seconds.

The handling numbers (as expected) is where the performance diverges justifying the much higher price where RCF pulled a 0.98G vs IS500 F-Sport Performance's 0.89G. They say it is because of the soft suspension and less grippy tires.

The chassis doesn't quite live up to the Performance label, delivering just 0.89 g of lateral stick and a suspension tune that's more in line with Lexus's cushier offerings. The relative softness means that, under hard acceleration, the car rears up dramatically. There's also the squishy brake pedal that only got more so during testing, although braking distances didn't suffer.
Click to expand...

Tested: 2022 Lexus IS500 F Sport Performance Channels the Past

Lexus pulls out its sonorous 5.0-liter V-8 for another go in the new IS500 F Sport Performance.

Put some better tires and a stiffer suspension setup (which most people will), the IS 500 F SPORT Performance should perform as good, if not better than the RC F. The 2022 Lexus IS 500 F Sport Performance marks the return of a V8 to the IS range, but this is not the second coming of the IS F.

Motor1 got pretty aggressive with their reviews too.

We can stomach the prices of the competition because they're big, all-around upgrades. The $13,000 that separates the M340i from the 330i feels reasonable not just when charging forward, but when attacking a corner. You look at the C43 and understand why it's $14,900 more expensive. It's a similar story with the Audi and even the Cadillac. But with $13,550 separating the IS 500 from a car that's almost identical in all but the way it accelerates and sounds, there's a sense you're not getting everything the higher price tag suggests you should.
Click to expand... 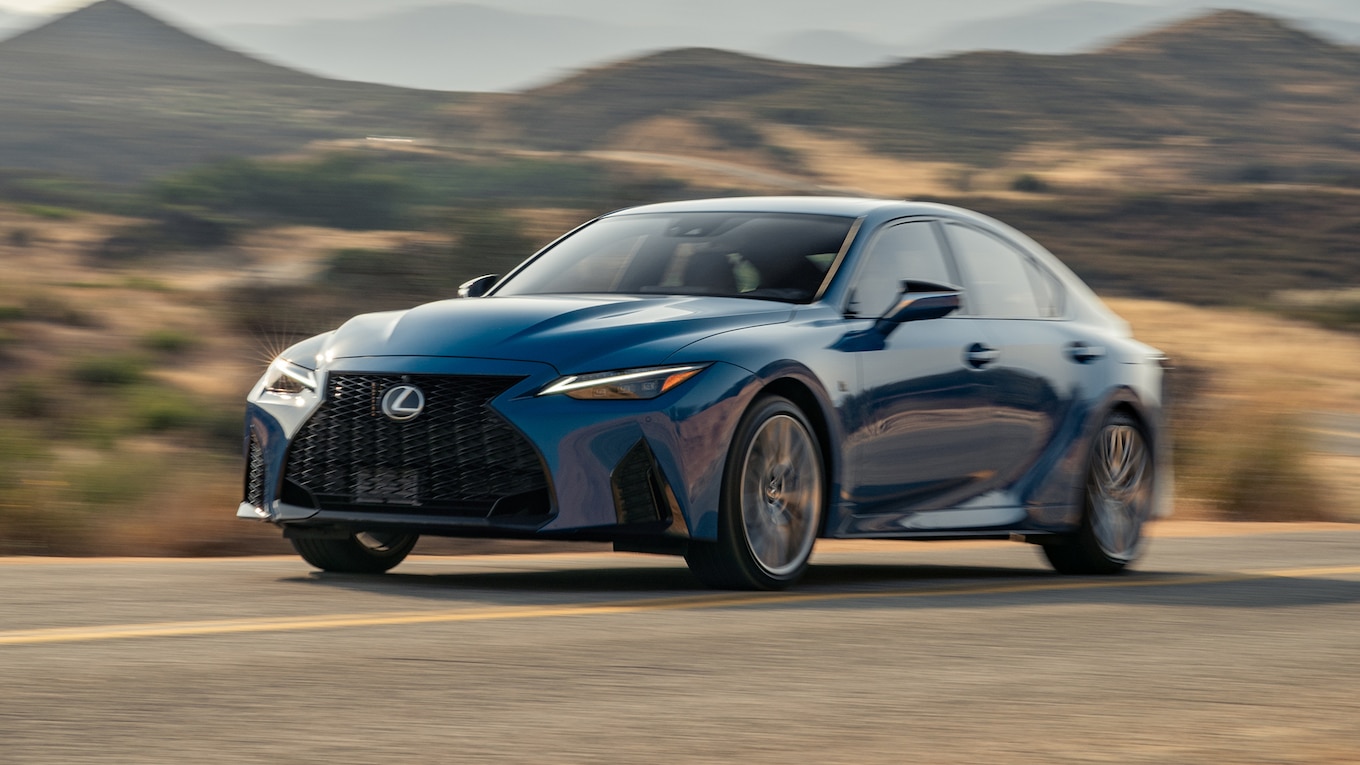 If you’ve waited for a new, naturally aspirated V-8 sport sedan, get the IS500 F Sport before it's gone. 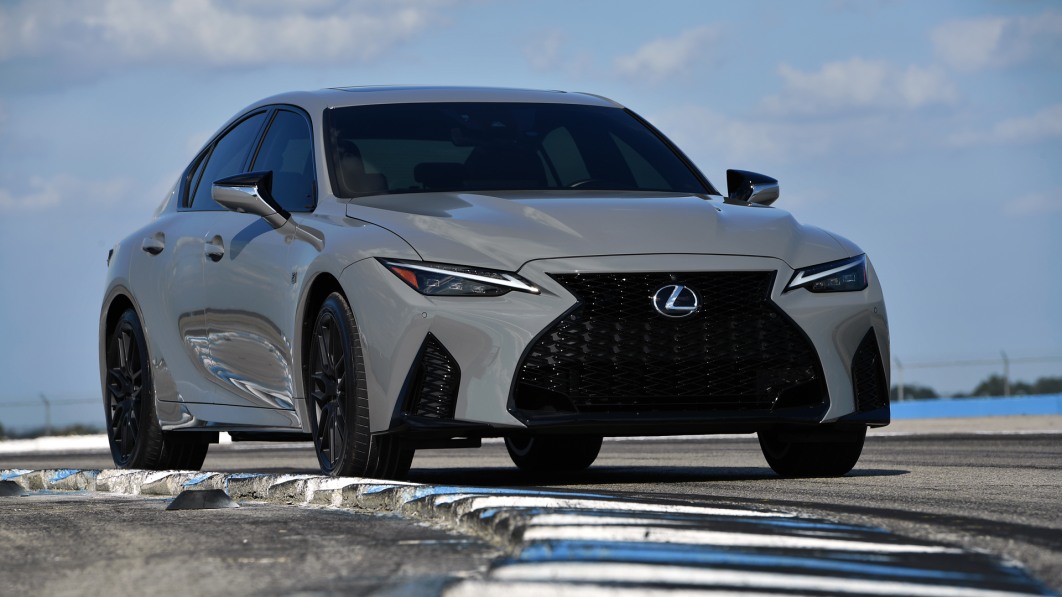 2022 Lexus IS 500 F Sport is a cool and fun sports sedan with its burly V8. It helps make up for some of its other shortfalls in features and infotainment.