Her Toyota Was Built for a Racing Legend: Lisa Weinberger’s 1972 Celica 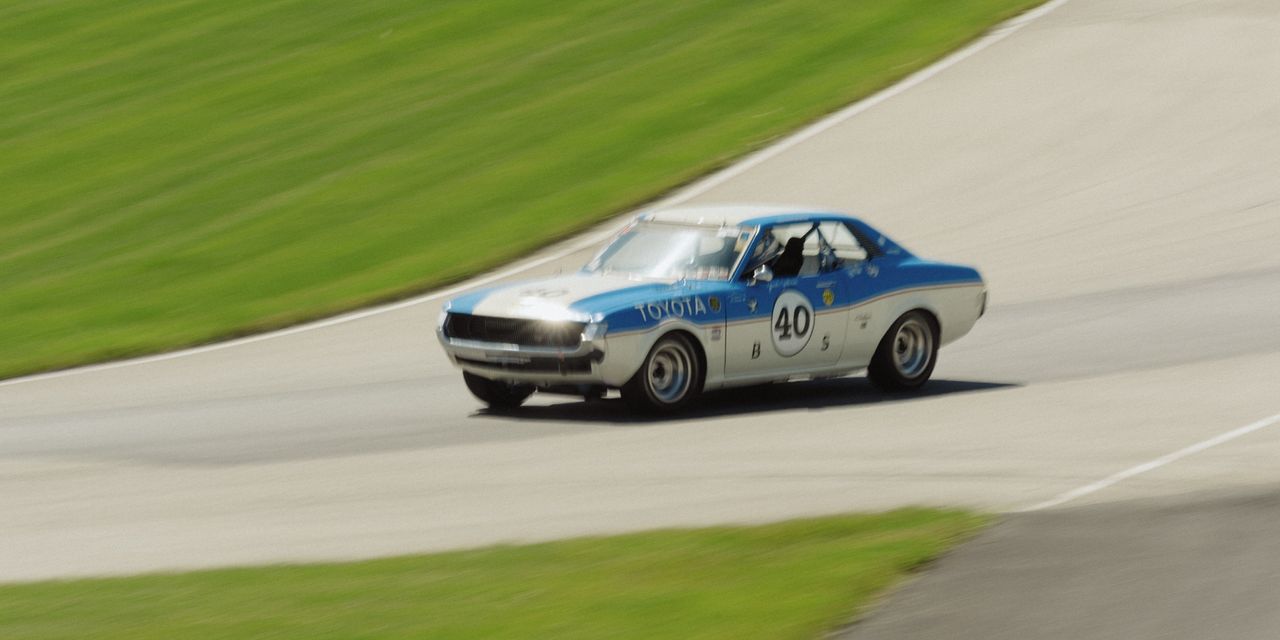 Her Toyota Was Built for a Racing Legend

Lisa Weinberger’s 1972 Toyota Celica was driven by Janet Guthrie, the first woman to compete at the Indianapolis 500 and Daytona 500.

Her Toyota Was Built for a Racing Legend​

Lisa Weinberger’s 1972 Toyota Celica was driven by Janet Guthrie, the first woman to compete at the Indianapolis 500 and Daytona 500​

Lisa Weinberger, 64, of Austin, Texas, and Naperville, Ill., who is president of the Footprints Foundation, which helps students pursue careers in the automotive industry through its Driven to Care program, on her 1972 Toyota Celica race car, as told to A.J. Baime.
Click to expand...

In 1989, I was driving through Chicago when I noticed this guy in a white Acura Legend. I thought, “I know that guy.” We pulled up to a tollbooth side by side and I saw him throw up his hands. I rolled down my window and asked what was wrong. He said, “I went into an unmanned exact-change booth and I don’t have exact change. I was looking at you wondering why you were looking at me, and I got distracted.” That man was John Weinberger and, seven years later, he and I were married at that same tollbooth. 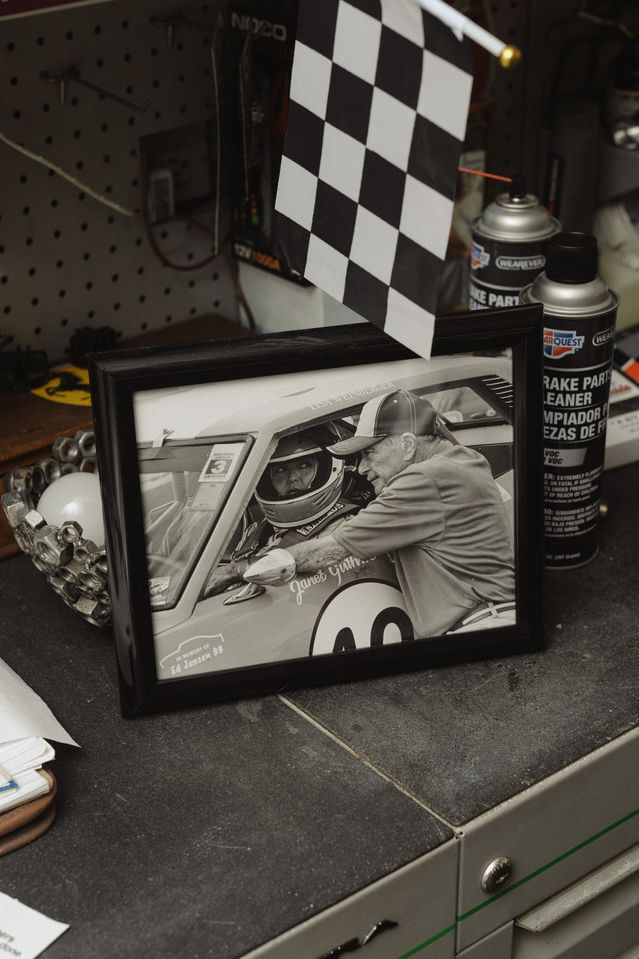 Ms. Weinberger in the car with her husband, John, coaching her, at a race in 2018.

John’s life was all about cars. He was a high-school dropout who started out working as a mechanic. Then he got into the gas-station business. Then he built one of the largest car-dealership groups in Illinois. When I met him, I didn’t even know how to drive a stick shift. But John raced cars and he wanted me to learn. So he bought me this 1972 Toyota Celica race car, and that is how it all started.
Click to expand...

This specific Celica was originally built out as a race car by Janet Guthrie, who raced it mostly in the northeast at tracks like Watkins Glen International and Lime Rock Park. She later went on to become the first woman to compete in the Indianapolis 500 and the Daytona 500. My husband bought it from a friend of his and, I believe, we became the third owners. The car is not street legal. 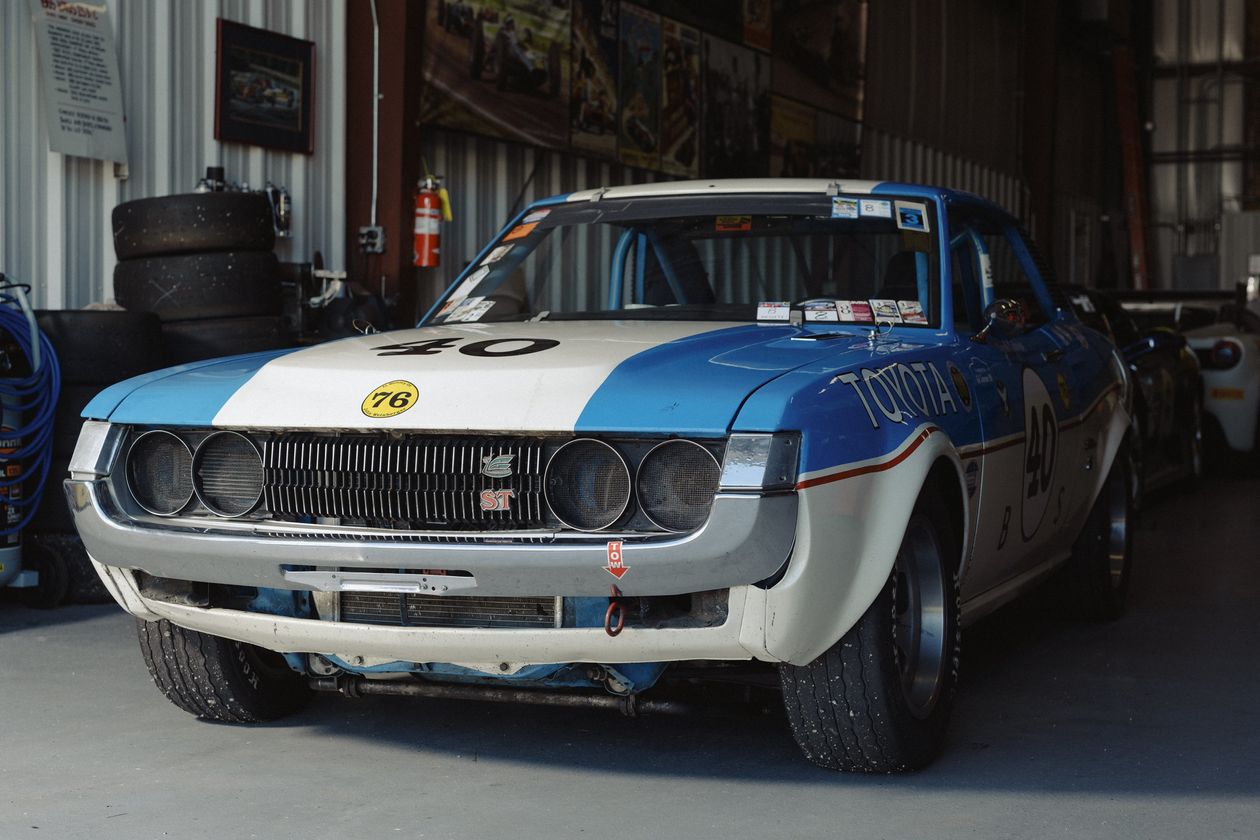 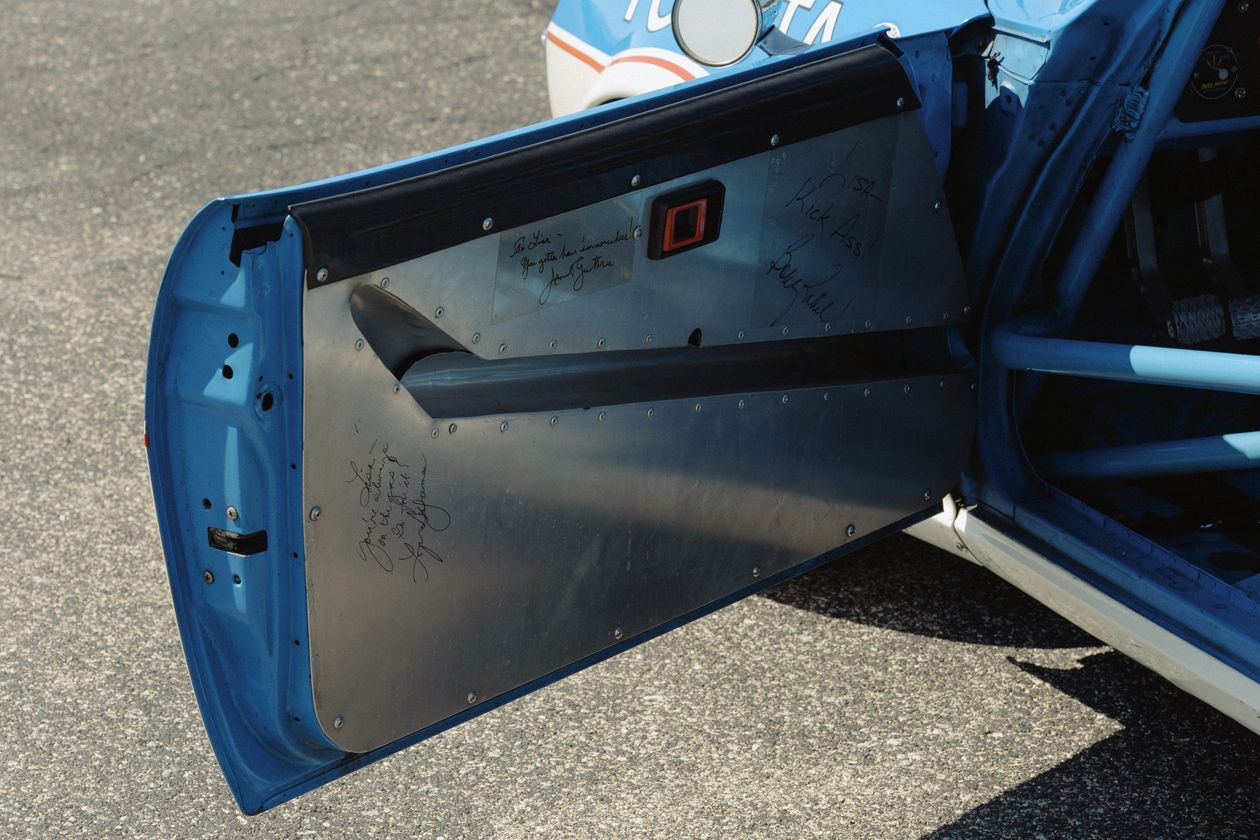 Because it is strictly a race car, things such as door fabric have been stripped out. Race-car driver Janet Guthrie’s signature can be seen on the door, top-center.
The first time I took it out, we were at Road America [a well-known racetrack in Wisconsin]. By that time, I had had some training in racetrack driving, but still, after a few laps, I came in crying. The seat in this car was way too big. The brakes were squishy. I was all over the place. Instead of the compassion I was expecting, my husband said, “Get back out there.” Which, it turned out, was pretty good advice.

We later replaced the seat with a go-kart seat because I am small. I was instantly able to cut a lot off my lap times. I put the number 40 on the car, because that is how old I was when I first drove it. Since then, I have competed in this car in vintage races around the country, at the Circuit of the Americas in Texas, Autobahn [Country Club] in Illinois, the Indianapolis Motor Speedway, and other racetracks.
Click to expand...

I have blown the engine twice. My husband made trophies for me using components of these blown engines. 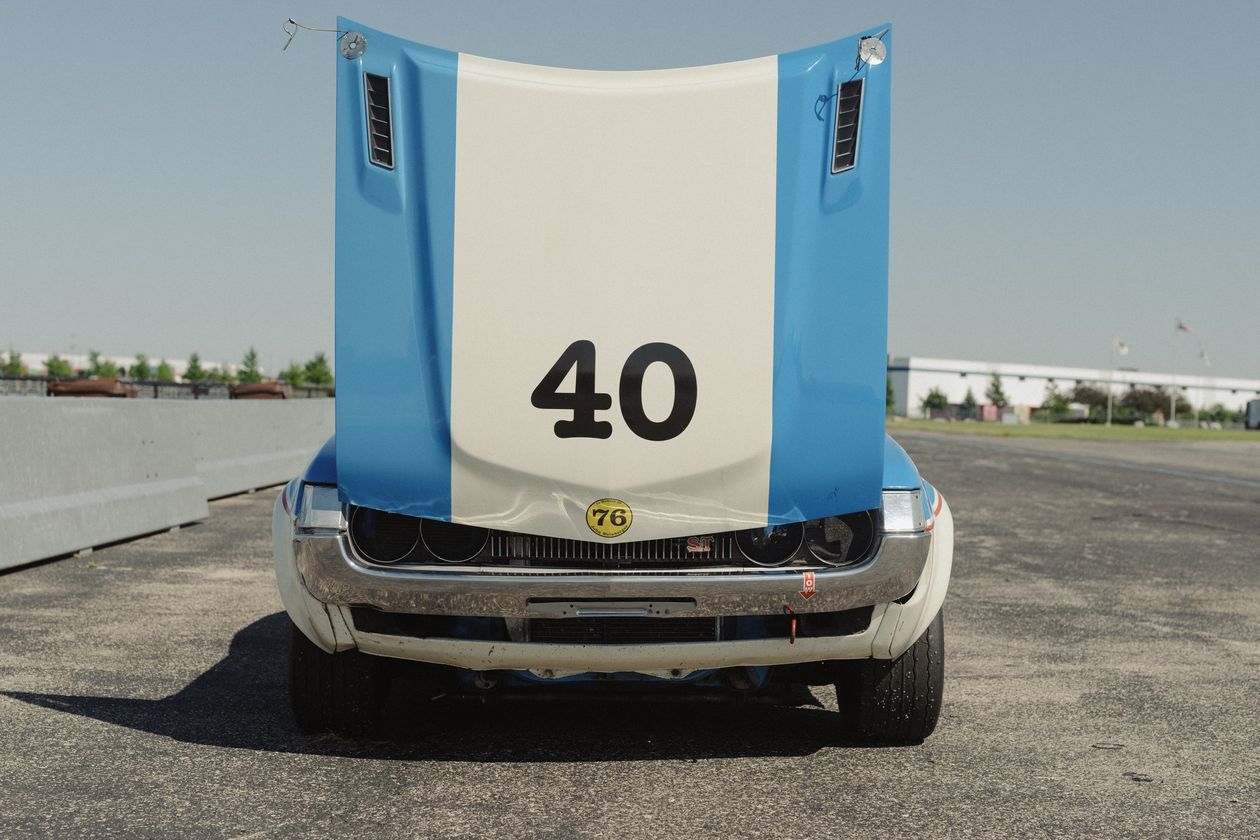 Ms. Weinberger put the number 40 on her car because that was her age when she first drove it.PHOTO: LYNDON FRENCH FOR THE WALL STREET JOURNAL 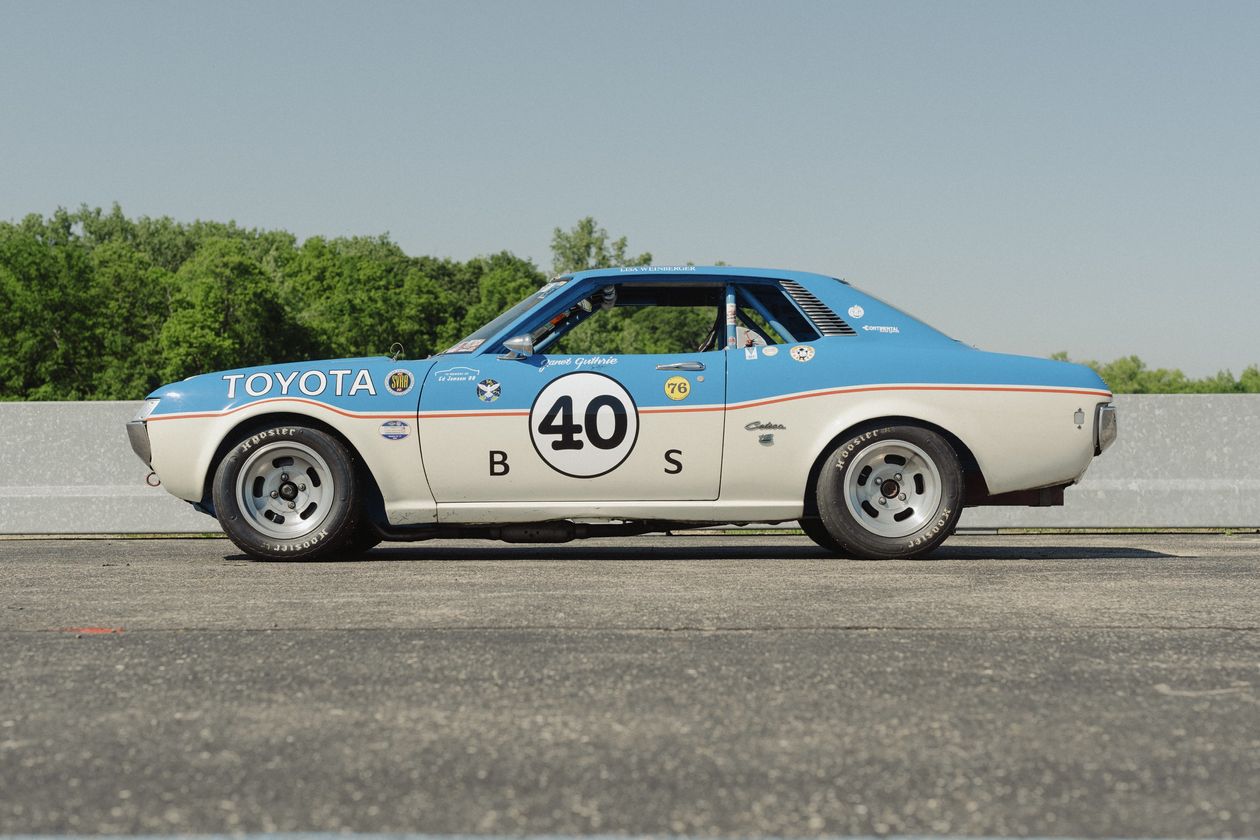 The 1972 Toyota still has Ms. Guthrie’s name above the racing number on the door. 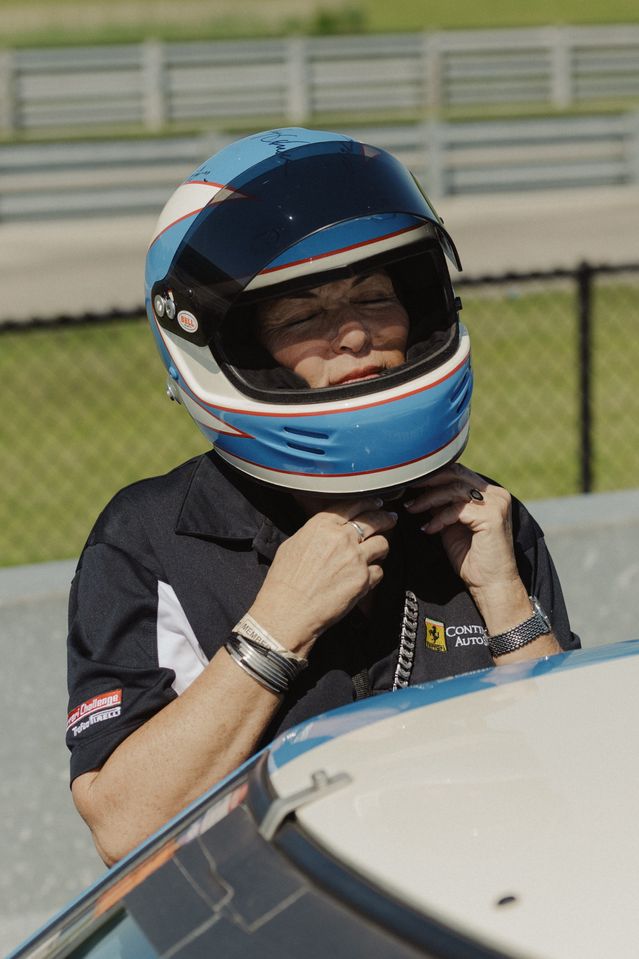 Ms. Weinberger with her helmet on, preparing to take the car out on track.
Click to expand...

Over the 24 years of owning this car, I have had the pleasure of knowing Janet Guthrie. She is an amazing woman, and she built out this Celica race car when Toyota was relatively new on the scene in the U.S. I once asked her how she handled the chauvinism in motor racing. She said, “I was a racer. I never thought of myself as a woman racer.” That is how I feel.
Click to expand...

Once, at an event at Road America celebrating the launch of her book, “Janet Guthrie: A Life At Full Throttle,” some years ago, I was able to reunite her with her old Toyota race car. She and I got to drive the track together, in this car.
Click to expand...

My husband, John, passed away during the pandemic. I was able to hold a celebration of life for him at the Circuit of the Americas in Austin, Texas. On that racetrack, I got to drive a hot lap [a lap at high speed] in the hearse with John’s casket in back. I hope that there is an afterlife so he could see how much I loved him and how much everyone else loved him.
He always said that he measured success in smiles, not dollars. Janet Guthrie is of that camp, and that is what this Toyota race car means to me. 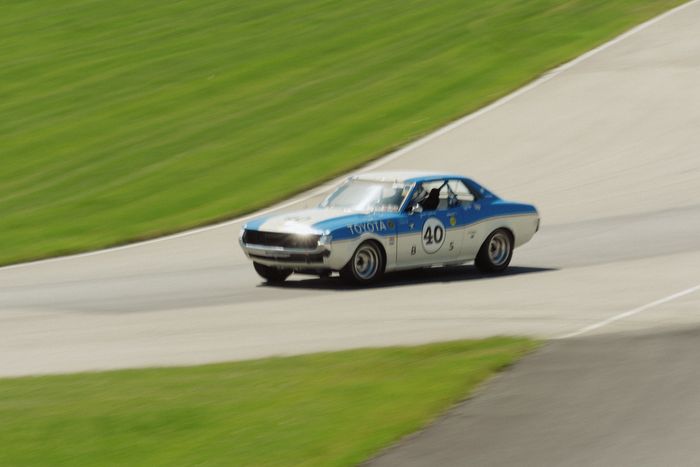