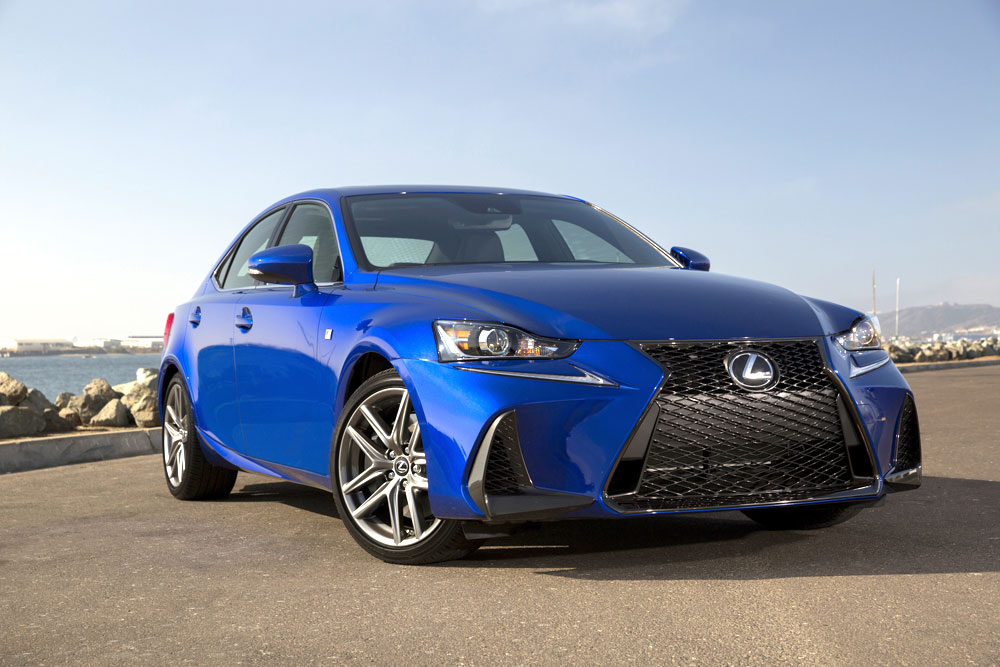 New front, new back, and new screen are the highlights for 2017.
Click to expand...

Lexus really botched the front end of this car. In my opinion, it's the worst spindle implementation ever.

Busy, jagged, haphazard, overly complicated, cartoonish, there's no flow. It honestly looks like something Lexus threw together to pitch the IS for a Transformers movie.
A

Gecko said:
Lexus really botched the front end of this car. In my opinion, it's the worst spindle implementation ever.

Busy, jagged, haphazard, overly complicated, cartoonish, there's no flow. It honestly looks like something Lexus threw together to pitch the IS for a Transformers movie.
Click to expand...

I agree with you 100%. One thing that is wrong with the IS is the shape of its spindle grill and they didn't bother to fix it. This is a very lazy update, this car needed a total front end redone with a wider spindle grill resembling the one of the RC atleast, total redone of the hood and headlights. The rear could have used a unique rear lid spoiler to square up the rear end because this car looks very weak from behind. Lexus please a refresh is not about making things look different it an opportunity to retify some design imperfections if possible. This is fail!

Gecko said:
Lexus really botched the front end of this car. In my opinion, it's the worst spindle implementation ever.

Busy, jagged, haphazard, overly complicated, cartoonish, there's no flow. It honestly looks like something Lexus threw together to pitch the IS for a Transformers movie.
Click to expand...

I haven't seen it in person but it seems evolutionary and not a far stretch from current trends. I don't care for fake scoops, bric brac or unnecessary embellishment. Form follows function is still the Bauhaus standard that I adhere to. I really like the new 10.3 in nav. display. I look forward to driving it to see if there has been any suspension evolution. The larger 3.5 Liter engine on the 300 was the big improvement last year on the AWD. The Safety System Plus will save some pedestrian lives and have a dynamic control system for highways that is almost auto pilot. A new IS-F would be an enthusiast dream.

Here are photos from Press Preview at the 2016 Miami Beach International Auto Show. Grill is extended all the way down eliminating painted frame at the bottom. Gray pieces added on horizontally to the brake duct openings look out of place and aftermarket IMO. Wheels stay the same from previous 2014-2016 F Sport. Rear valance update now matches the rest of the lineup with square exhaust ports.
Didn't think white was the best choice to show off a freshened model but that's what Lexus brought to the show.
As a 2015 IS 250 F Sport driver, I don't hate the update, but IMO there is nothing compelling here that says o must go out and get one. Loss of V6 and loss of Matador Red Mica will keep me in my present car for the foreseeable future.

I guess I don't have much more to add other than - WHY DIDN'T THEY MOVE THE DAMN CUP HOLDERS??
Also, I thought the F-Sport wheels were pretty week, but they left those the same :-(
Do like the larger nav screen as it was needed.
I much prefer the previous front end compared to this "update". Especially the headlights and grill.
Oh well, I'm looking forward to my 2017 RC 350

Sorry not a fan.

32 new photos of the updated sports sedan.
Click to expand...

Don't tell me those headlights will not coming to US 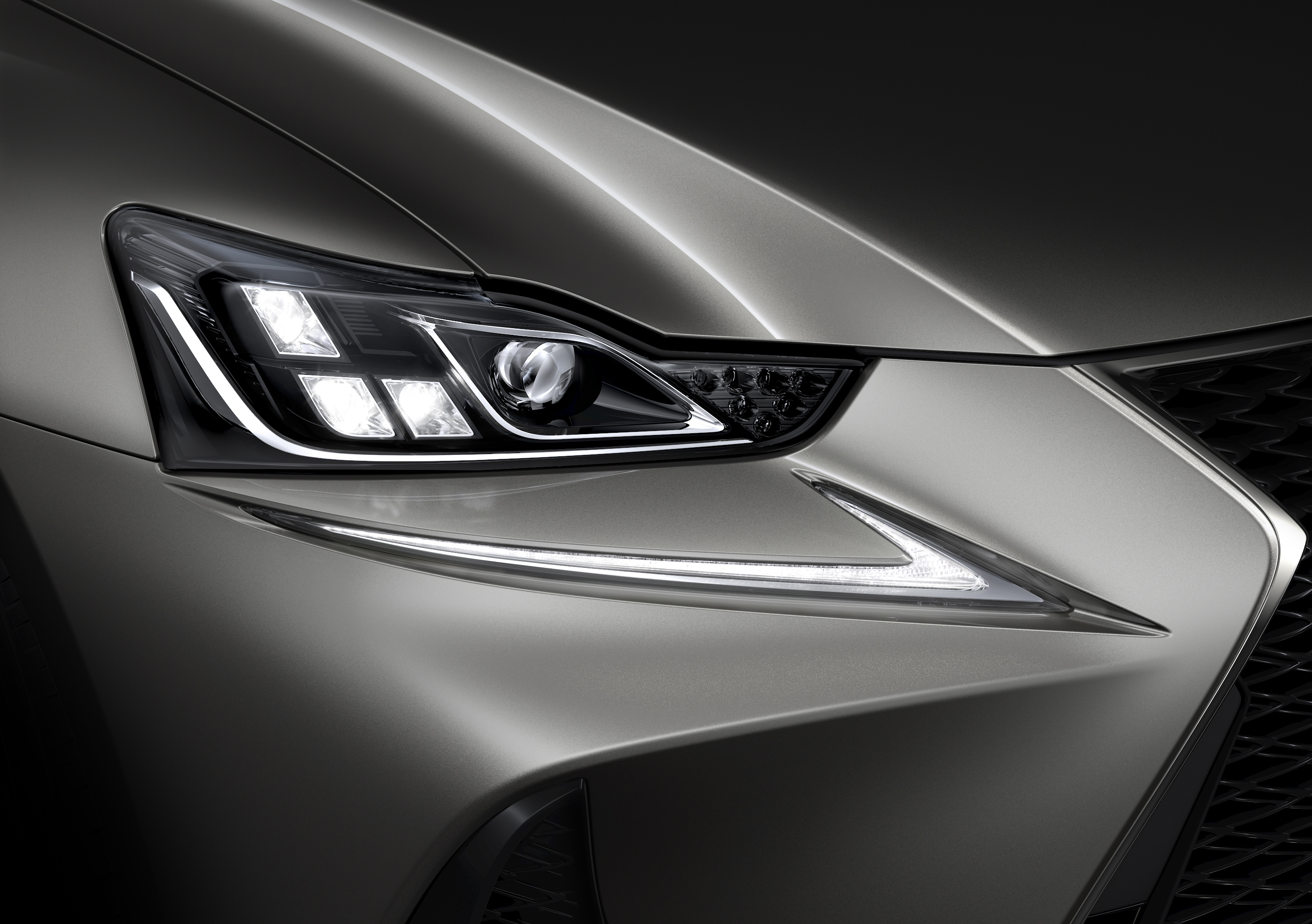 Madi said:
Don't tell me those headlights will not coming to US

This is a great question -- have to think these headlights would have been featured in the photos if they were coming to America.

I don't know what to think -- in some photos, the update looks good, and then in others...

Always thought the standard IS looked better than the F SPORT version, and I still do. But really though, who buys sedans anymore?

(P.S. I'm waiting to hear from @Joaquin Ruhi, who I know was at the Miami show.)

The front end would look a whole lot better if that vent thing in the headlights wasn't there IMO.
D

A lot of people are saying that the spindle grille is one of the worst implementations. I have to disagree. Looking at just the grille, it's definitely a good size for the IS. The issues are those side vents and headlights. Too be honest, Ive never been the biggest fan of these separate LED DRLs. They are just choppy and not the Lexus image Ive known. Those side vents add such a huge bulge to the front. Overall though, I don't mind it. I personally think that USB FSport looks fantastic! The rear also looks a lot better (especially that bottom portion of the bumper).

Love this refresh. But if I can have an RX F-Sport in Nightfall Mica, why not an IS as well?

It's nice enough, most people (including Lexus buyers) will hardly notice. Don't expect it to make much of a difference.

Not really feeling the FSport version, I might have to wait until I see it in person to pass my judgements.

krew said:
I don't know what to think -- in some photos, the update looks good, and then in others...

Always thought the standard IS looked better than the F SPORT version, and I still do. But really though, who buys sedans anymore?

(P.S. I'm waiting to hear from @Joaquin Ruhi, who I know was at the Miami show.)
Click to expand...

I have to admit that, during the Saturday morning press conference, I was far more focused on the LC (which I'd never seen in the metal) than on the IS facelift. Last night, however, I went back to the show and focused more on the 2017 IS.

Frankly, I've never been a fan of the 3rd-gen IS's styling. In 2014, when the lease on my 2011 IS 350 F Sport was up, I had the choice of leasing a 2014 3rd-gen IS or buying the "old" 2011. While recognizing the 3rd-gen IS's advantages in a number of areas (nicer interior, roomier back seat and trunk, quieter highway cruising), it was, to me, a no-brainer to buy the 2011 2nd-gen IS instead. It just suits my tastes and personality better.

Like many of you, I don't quite know what to think of the 2017 facelift, either, and that's after seeing it in person! The front end is, overall, no better or no worse, just different for different's sake (and ugly in either iteration). I'd always hoped against hope that, for the mid-life facelift, Lexus would tone down the hood cutline / headlights / Nike swoosh DRL mishmash into something more akin to the 2nd-gen IS (such as what Theophilus Chin rendered back in 2013: https://lexusenthusiast.com/2013/09/03/photochop-new-lexus-is-with-old-headlights/ ). Alas, the 3 elements now seem to be more randomly thrown together and unrelated to each other than ever.

Judging by the pictures (since it wasn't present at the show), one area in which the facelift appears to have been an improvement is in the non-F Sport grille, which is now seemingly all horizontal bars, as opposed to the previous mix of horizontal bars and honeycomb pattern which struck me like wearing a striped polo shirt with plaid shorts.

At the rear, again, it's mostly different for different's sake. I do think that the "diffuser" portion between the exhaust pipes looks tidier in the new one.

I took a few cameraphone shots that appear on Instagram via the Kaizen Factor Twitter feed: https://twitter.com/KaizenFactor

My best guess for the 4th-gen IS (based on my research for one of my recent Kaizen Factor pieces) is a debut during the first trimester of calendar year 2019 (Detroit, Geneva, New York and Shanghai being the major auto shows during that time frame) followed by a traditional late summer/early fall 2019 on-sale date (2020 model year).
You must log in or register to reply here.
Share:
Facebook Twitter Reddit Email Share Link
Top