ssun30 said:
They are targeting 50k a year, which is how many Reiz they were selling back when it was popular. But I think they can be much more ambitious than that. Not having a 2.0L certainly limits its volume, but in its segment there's simply no serious challenger.

FAW played the right card by promoting it as a sporty sedan, like GAC did with the Camry. They did not call it a 'full-size premium car' to not affect the Crown. They are also making sure nobody is cross-shopping it against the ES. It is the spiritual successor to the Reiz (the world is a crazy place), which makes me worried that Toyota is seriously considering replacing the Mark X with the Avalon in Japan.
Click to expand...

btw what engines in china?

First time I see the A25B-FXS engine code. What differentiates it from the A25A-FXS?
S

Joaquin Ruhi said:
First time I see the A25B-FXS engine code. What differentiates it from the A25A-FXS?
Click to expand...

ChDM engines usually carry a separate designation (but not always). It's identical to the A25A.
M

Toyota has significantly underestimated demand for Corolla Hatch, that car seems to have lowest days on lot stats for Toyota right now.

I have heard that in the US, dealers "can barely keep them on the lot."
S

seems like Toyota capped it to 20k/yr, based on Corolla iM sales I guess... probably could do 50k.

I've seen quite a few around. They were a bit hit at SEMA and the youth are modding them. Mahn if they made a hotter version it would be something!

Following the successful launch of the new Corolla earlier this year – praised for its dynamic look and engaging driving capabilities – Toyota presents the Corolla GR SPORT, a sportier variant that injects some of the passion of TOYOTA GAZOO Racing. After the introduction of the Yaris GR SPORT at last year's Paris motor show, the Corolla GR SPORT is the second model to join Toyota's European GR SPORT range.

Available on both Hatchback & Touring Sports models and with a choice of 1.8 or 2.0 litre self-charging hybrid powertrains, the new GR SPORT grade takes the GAZOO Racing spirit to the heart of the Corolla range; its unique, sporting design cues targeting younger and enthusiastic customer.

On board, the GR SPORT is equipped with model-specific Sport seats in black fabric with leather-like bolsters, which may be optionally upgraded to full leather upholstery. Additionally it features black and red stitch on instrument panel, steering wheel and shifter.

The Corolla GR SPORT will be on sale from January 2020.

Corolla TREK, available only on Touring Sports models with a choice of 1.8 or 2.0 litre self-charging hybrid powertrains, reflects the growing popularity of crossover-type, rugged looking vehicles within the European C-segment.

Designed to appeal to people who enjoy active lifestyles and outdoor pursuits, Corolla TREK has sparked a collaboration between Toyota and Trek Bicycle. This partnership brings together two brands that have similar environmental values to offer complementary mobility solutions.

Founded in 1976, Trek Bicycle is one of the world’s most popular bike brands currently selling about 1.5 million bikes per annum globally. In addition to manufacturing high performance cycling equipment, Trek uses the bicycle to break down the barriers that prevent people from living happier, healthier, more active lives.

On board, the Corolla TREK is equipped with a 7-inch TFT infotainment screen, model-specific, two-tone fabric seats and matching wood deco elements.

The Corolla TREK will be on sale from August 2019.
Click to expand... 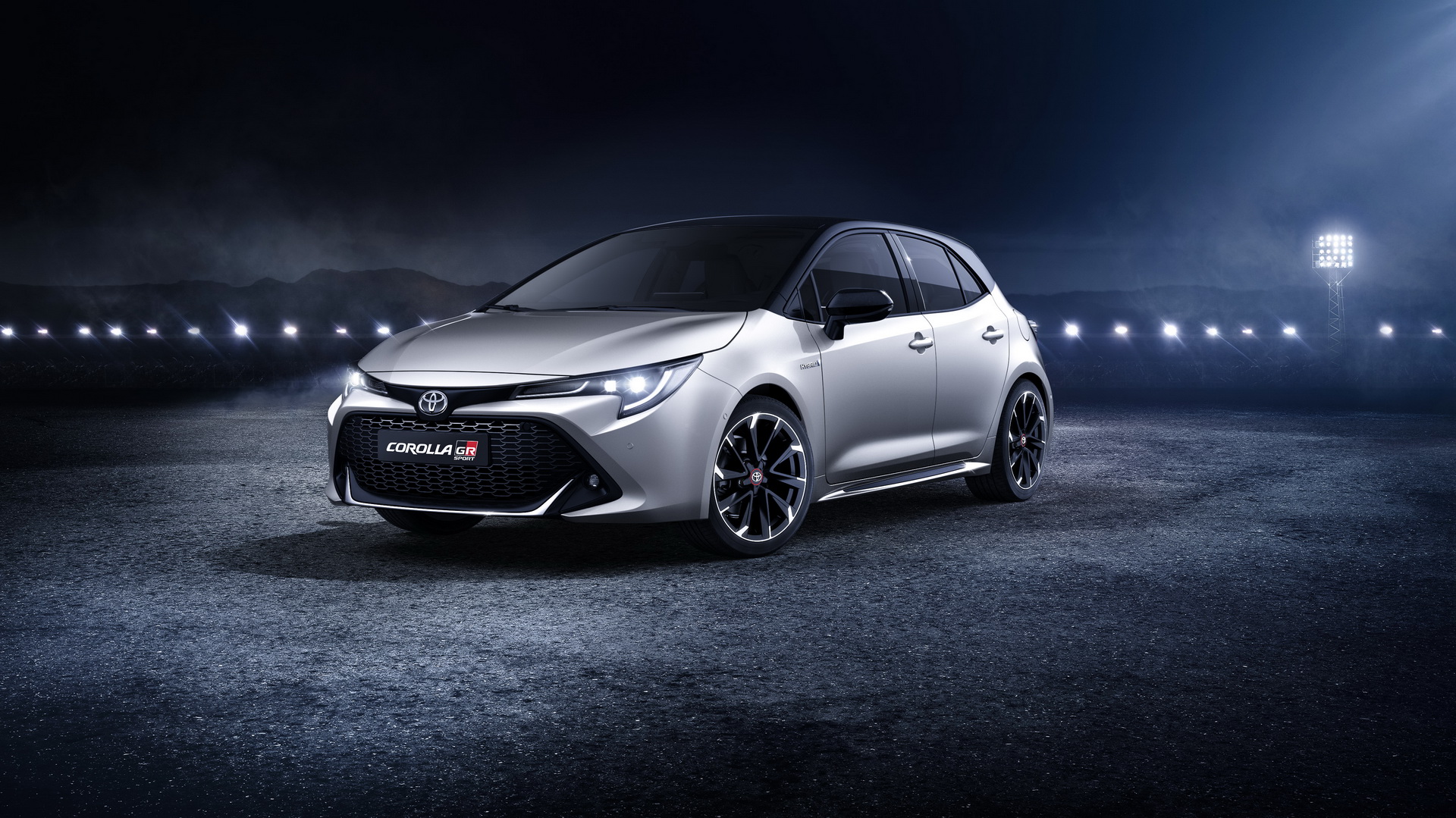 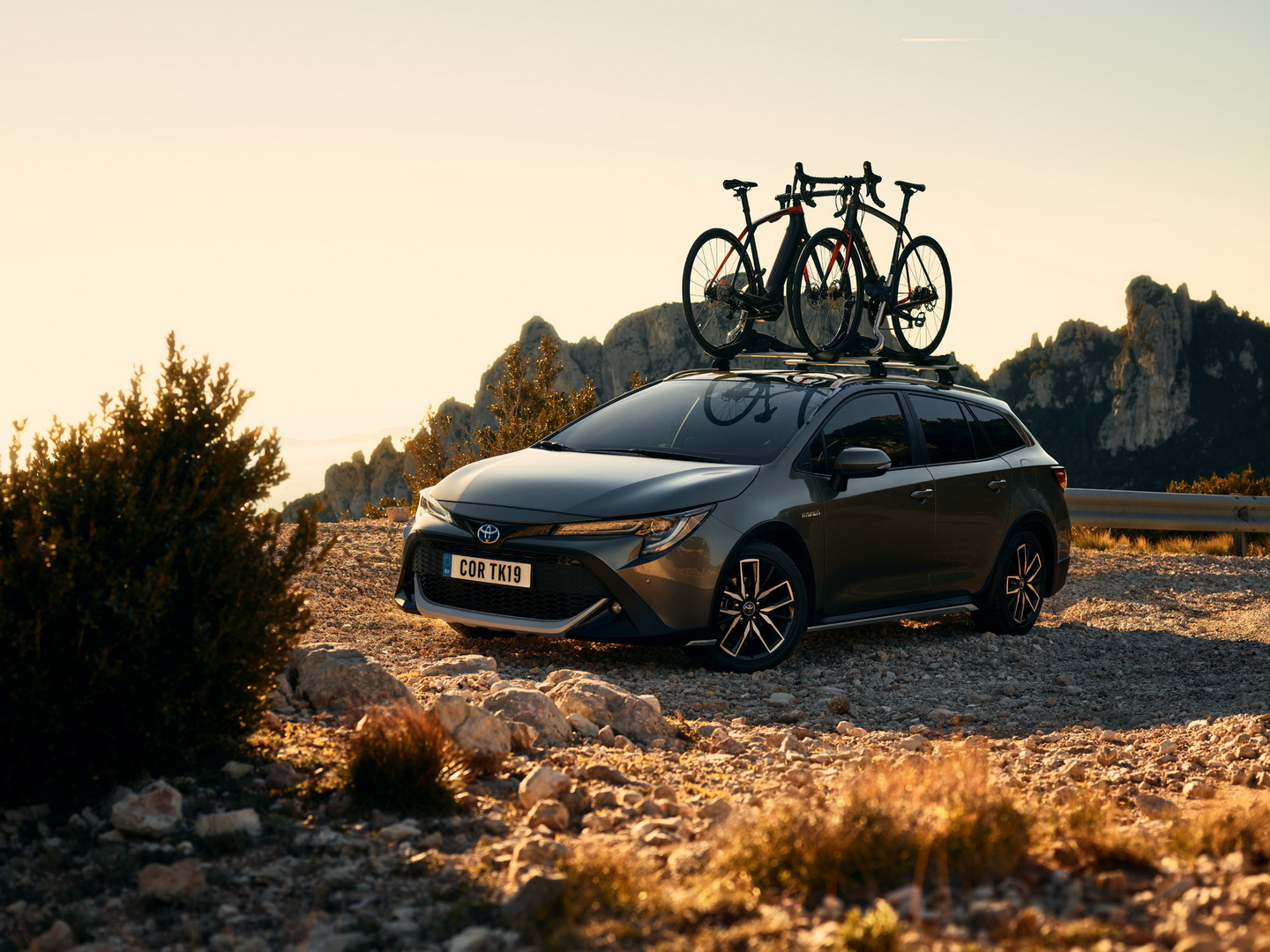 I wonder if the European Corolla TREK has any relation to the Corolla Cross trademark filed in the U.S.?
M


With more than 46 million Toyota Corollas sold globally since its introduction in 1966, it would be difficult to find a driver who did not recognize the name. Everyone, it seems, has a Corolla story. Many, though, are going to be doing double takes when they see the re-imagined and reconfigured 2020 Toyota Corolla sedan. And that’s exactly the point.

The 12th-generation Toyota Corolla made its arrival in three chapters: the all-new Corolla hatchback arrived last summer, and then came the current best-selling Corolla body style, the sedan, in two waves – a reveal of the new gas model in Carmel and then the introduction of the U.S.’ first Corolla Hybrid at the Los Angeles Auto Show. All three are based on the Toyota New Global Architecture (TNGA), which is far more than a new body structure, bringing together new approaches to engineering, design, assembly, and materials. Now, there really is a Corolla for everyone.

TNGA transforms Corolla styles into drivers’ delights while also bolstering the model’s renowned value and reliability. They draw from the same DNA. It’s no surprise, then, that the 2020 Corolla sedan dramatically elevates this model’s focus on comfort and refinement while also infusing it with the Corolla hatchback’s feisty personality.

The Corolla sedan’s bold new look is a perfect reflection of the bumper-to-bumper, wheels-to-roof transformation that has taken place. The TNGA platform means an available engine that produces more power than its predecessor yet delivers better fuel efficiency. TNGA imbues the Corolla sedan with greater agility, yet also with its smoothest, quietest ride. TNGA also means an elevated feeling of quality in every surface, switch and control the driver sees and touches. And, critically, TNGA delivers on Toyota’s commitment to driver and passenger safety with the Toyota Safety Sense 2.0 suite of active safety systems – standard on every Corolla sedan model.
Click to expand... 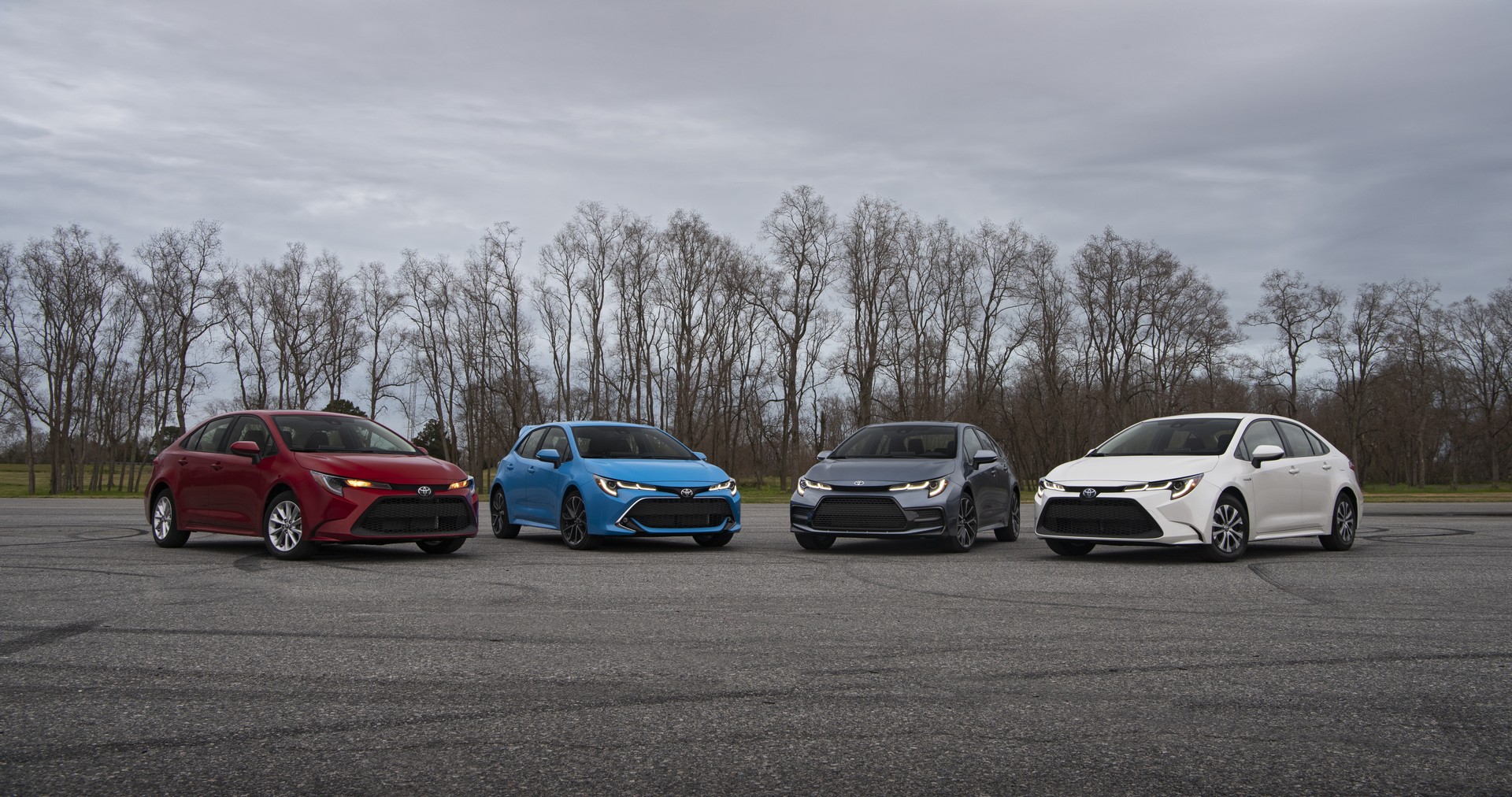 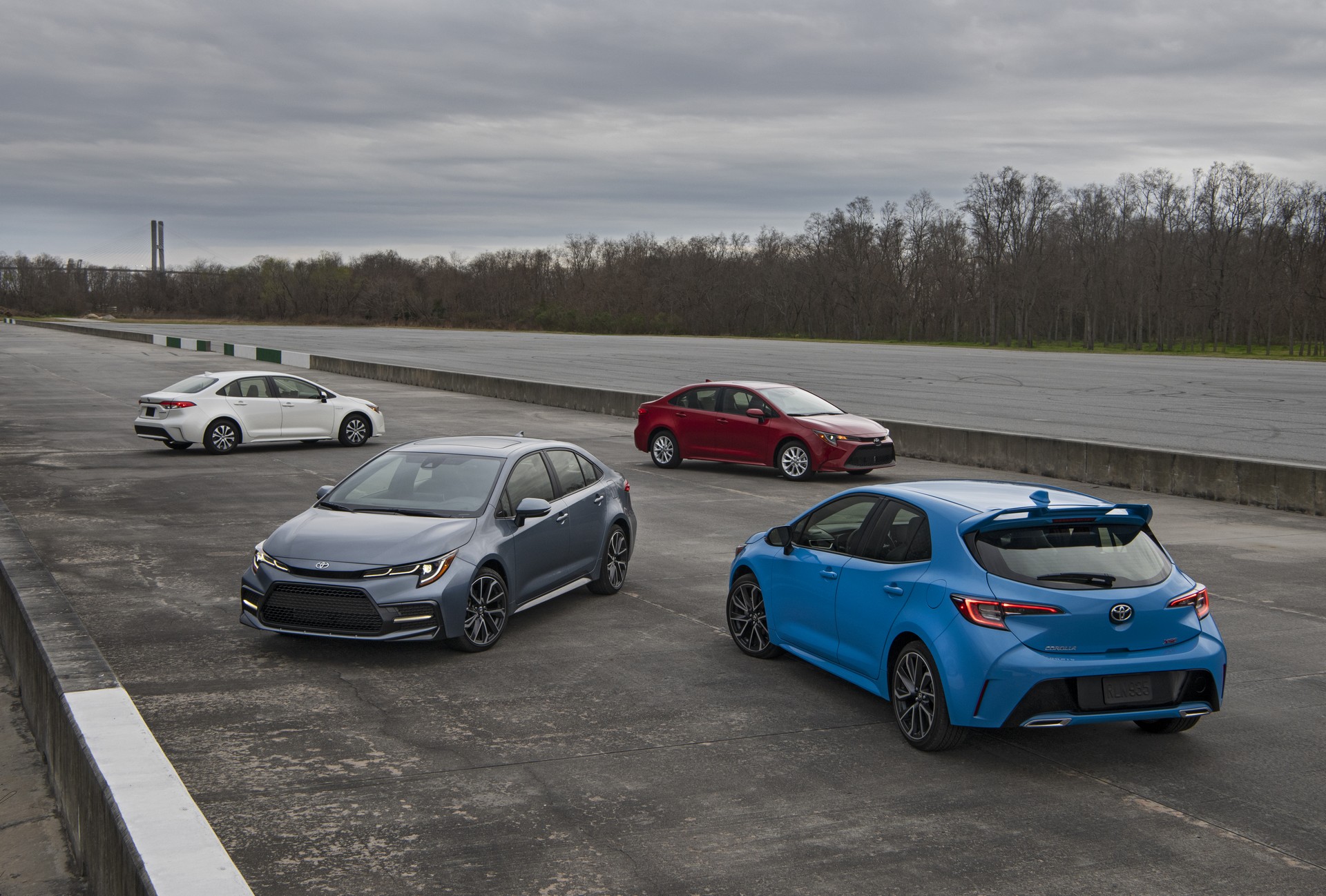 That new gray color that looks blue looks good. Kinda like Atomic Silver on all the Lexuseses

Tragic Bronson said:
That new gray color that looks blue looks good. Kinda like Atomic Silver on all the Lexuseses
Click to expand...

This is why I use "Lexus vehicles" for the plural, because there's no way to make it sound reasonable otherwise.
You must log in or register to reply here.
Share:
Reddit Pinterest Tumblr WhatsApp Email Link
Top