REDESIGNED MODEL KICKS OFF A NEW GENERATION OF MAZDA CARS

Mazda Motor Corporation today hosted the world premiere of the all-new Mazda3. The fully redesigned model will be rolled out to global markets starting from North America in early 2019. The all-new Mazda3 will be on display at the Los Angeles Auto Show, open to the public from Nov. 30 through Dec. 9.1

The all-new Mazda3 adopts a matured Kodo design language that attempts to embody the essence of Japanese aesthetics. While the overall form presents a simple, single motion, subtle undulations bring the design to life through shifting light and reflections that glide over the body surface. The result is a richerand more powerful expression of vitality than previous Kodo models. Despite sharing the Mazda3 moniker, the hatchback and sedan models have distinct personalities—the design of the hatchback is emotive, the sedan elegant.

The all-new Mazda3 adopts Mazda’s new Skyactiv-Vehicle Architecture, designed to enable people to make the most of their natural sense of balance. The powertrain lineup comprises the latest Skyactiv-X, Skyactiv-G and Skyactiv-D engines, each of which provides responsive speed control in any driving situation. Based on its philosophy of designing the car around the human being, Mazda has dramatically enhanced the car’s fundamental driving attributes such that accelerating, turning and braking feel completely natural.

Having sold over 6 million units2 since its 2003 debut, the all-new Mazda3 is a global strategic model that has driven Mazda’s growth from both a brand and business perspective. It has delivered Mazda’s renowned driving pleasure to customers all over the world and been a mainstay of production at key plants globally.

“The all-new Mazda3 we unveil today begins a new era for Mazda,” said Akira Marumoto, Mazda’s Representative Director, President andCEO. “The next generation of Mazda cars will enhance the value of the car-ownership experience. Though these products, we will further raise Mazda’s brand value and work towards our goal of building strong bonds with customers all over the world.”
Click to expand...

The competition has some work to do.
S

Incredible work by Mazda. IMO it easily overshadows the just-launched Corolla sedan. Exterior design is much more elegant. Interior they seem to got rid of the much-despised tack-on tablet. And the engine, simply one full generation ahead of everyone, including the Dynamic Force.

Before calling this COTY 2019, I will wait to see if Mazda offers as good a safety/driving aid package as the TSS 2.0. And the Skyactiv-X better be reliable.
L

Looks nothing like the concept. Proportions are all wrong: C-pillar looks too thick/heavy, front overhang way too long, and with huge rims the wheels still too small, interior too dark (light, not color) and high.

I also struggle with that super chunky C-pillar... it messes up the design of the hatch, IMO. Sedan and everything else about both is very nice.
M

When is the new Corolla getting AWD?

Levi said:
Looks nothing like the concept. Proportions are all wrong: C-pillar looks too thick/heavy, front overhang way too long, and with huge rims the wheels still too small, interior too dark (light, not color) and high.
Click to expand...

I find myself with deeply mixed feelings about this new Mazda3. Historically, GM and Subaru concepts, in particular, have suffered enormously when transitioning to production, whereas Mazda stood out for production cars that skewed closely to their concept forebears. Not this one, though. In transitioning from the Kai Concept, the 4th-gen Mazda3 hatchback has lost much of the concept's allure. Levi's comments above nail the criticisms, although the optional (on the hatchback) burgundy interior does look quite attractive. 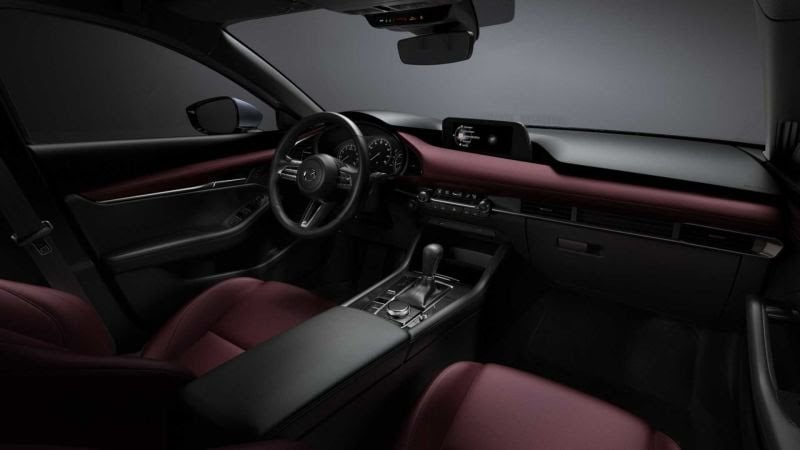 Another major disappointment is the downgrade of the rear suspension from multi-link to a torsion beam axle. So, at least on paper, the latest Corolla has a more sophisticated rear suspension than the Mazda3!

On the plus side, optional AWD is a pleasant surprise, the pseudo-HCCI Skyactiv-X promises to be a grand-slam home run (assuming it's reliable, as ssun30 noted), and nobody does manual transmissions like Mazda. Overall, the jury's still out for me on this one...

I like the interior, but the exterior's wrong for all the reasons noted, especially that C-pillar. Yikes. The resemblance of the Tesla Model 3 to the outgoing Mazda 3 has been noted before, but this one seems to return the favor and borrow some styling elements from the Model 3. Unfortunately it's not quite as successful with them as the Tesla is.
S

Yeah, I noticed that too. One small line about it, but it's a pretty big deal. Guess they had to cut costs somewhere...
M

Mazda president and CEO Akira Marumoto told Australian outlet Drive at the LA Auto Show that Mazda’s a small company, so a performance version of the new Mazda 3 is not “a high particular priority” and the company isn’t planning one.

Mazda’s CEO of North American Operations, Masahiro Moro, even told Australian outlet Motoring in 2016 that the company was too mature now for those silly little hot hatches and “Mazdaspeed” things:

“As a brand we are trying to elevate again a little bit more, because execution of Mazda MPS or Mazdaspeed 3 or whatever you call it was a little bit – I am not afraid to say it – childish.”

When our David Tracy asked Mazda representatives in LA about a Mazdaspeed version of the new 3, we were also told not to expect one. But hey, we were reminded, the company does offer “Signature” versions of the Mazda 6 and CX-5, which, along with other higher trims, both get 2.5-liter, four-cylinder turbocharged engines rated at 250 horsepower.

“When asked if that engine fits in the 3, they said it does,” David reported back from the show floor.
Click to expand...

So much for "zoom-zoom".

Autoblog's Joel Stockdale addresses questions on powertrains, suspension, AWD and the possibility of a future 2.5 turbo. Here are the main excerpts:

First off, of the five engines announced for the Mazda3, just two of them are slated for the United States. At launch, the Mazda3 will be offered only with a naturally aspirated 2.5-liter four-cylinder. It's mechanically pretty much the same as what you'll find in the Mazda CX-5 and Mazda6. It even features cylinder deactivation. The only real difference between this engine, its predecessor, and the one in other Mazdas is some minor engine tuning tweaks. Power is almost the same with 186 horsepower and 186 pound-feet of torque, gains of 2 horsepower and 1 pound-foot. Fuel economy is rated at 27 mpg in the city, 36 on the highway, and 30 overall for front-wheel-drive models. We would expect the all-wheel-drive model to have slightly worse fuel economy simply due to extra weight and having to power two extra wheels.

The Skyactiv-X engine will become available later in 2019. It will be rolled out in Europe first, with America coming after. When it does come here, it will be offered in states with stricter emissions regulations before coming to other states.

While we're on the topic of engines, we also probed a bit about the possibility of the turbocharged 2.5-liter engine coming to the Mazda3. We did get the typical response of not being able to comment on future product. However, they did confirm that the turbocharged engine does in fact fit in the new Mazda3, since it and the naturally aspirated engine are very similar, and the naturally aspirated engine still uses an enormous header, meaning turbo plumbing wouldn't be an issue. Everyone we spoke with at Mazda did emphasize that they are listening closely to buyers, which is what led to the turbo engine being offered on the Mazda6 and CX-5, as well as the introduction of all-wheel-drive to the Mazda3. So, if you, like us, want to see the turbo engine added to the Mazda3, let the company know. They might just do it.

This all-wheel-drive system we've mentioned is interesting, too. Mazda has engineered it to work in tandem with the G-Vectoring systems. In case you're not familiar or don't remember, G-Vectoring cuts power briefly at turn-in to shift weight forward, increase the contact patch of the front tires, and generally make the car more eager to enter corners. G-Vectoring Plus, which will be on the Mazda3, adds a dab of brakes to the outside front wheel to help the car straighten out more readily on corner exit. What happens with all-wheel-drive, is that the rear axle is decoupled from the engine as the car turns in. The engineers found that the drag from the rear wheels and drivetrain made the car more reluctant to turn. Then, as the car straightens out, power is returned to the rear wheels to again help it on corner exit.

Finally, we come to the rear suspension. We were surprised to see the Mazda3 abandon a multi-link rear suspension in favor of a torsion-beam rear end. Torsion beam suspensions are generally considered less capable and refined since it ties both wheels together. Sometimes it's used because it's cheap to develop, or because it's easy to package. Everyone we spoke to at Mazda said that this design wasn't chosen for those reasons, but rather because they were able to make the car ride and handle better. The company found that the design offered more natural reactions to bumps for the passengers inside, and the company was able to really dial in every single part since it was a simpler suspension with fewer variables to worry about. For example, one of Mazda's engineers mentioned that each side of the multi-link suspension had 10 bushings to mess with, and the torsion-beam setup has just one on each side for the trailing arms.
Click to expand...

I skipped the Mazda event but saw them at the auto show. Surprisingly in person I liked the hatch much better than pics. The fat C-pillar is different but someone pulled it off for me. Nice detailing you can't see in pics.

Gecko said:
Yeah, I noticed that too. One small line about it, but it's a pretty big deal. Guess they had to cut costs somewhere...
Click to expand...

My experience, over the years, has been that there's not much difference between a torsion beam and full-IRS in most normal driving....you've got to push things pretty hard, or have a pretty rough road in a corner, to see a real difference in handling. A beam-axle also makes things much simpler for rear-wheel alignment....most vehicles I knew with that feature don't need rear alignments at all.
M

Its so, so nice
M

I have to say Mazda continues to impress and they are really moving upmarket. Lets be honest, how is an Acura ILX any better than this? Its worse in many cases if not overall.

At Rolex 24 this year even the Mazda booth could have been confused with a luxury marque. It was very impressive, as their merchandise. They are paying attention to the details.
M