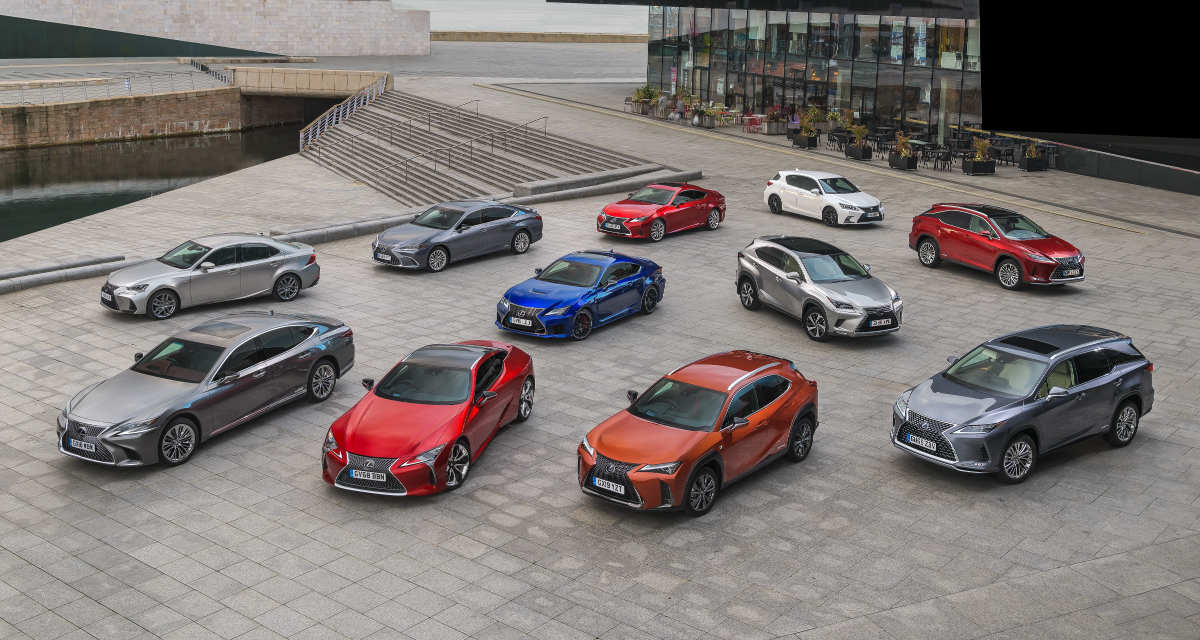 Even with two weeks remaining in the 2019 calendar year, a trio of Lexus markets are expecting record sales.

As of December 10, Lexus UK surpassed its all-time sales record – 15,126 vehicles – with a forecast of 15,700 total deliveries at year-end. Those numbers already surpass the previous record for the brand in Britain (set in 2007, before the global financial crash) and represent a sizable 25% increase over 2018 sales figures.

Much credit goes to the marque’s lineup of hybrid crossover SUVs, which comprise 70% of total sales for 2019 and a 58% increase versus 2018. NX sales led the way with more than 4600 units sold, while the RX line saw a 19% rise versus 2018 and the new-for-2019 UX saw approximately 3500 units delivered in its inaugural year. On the sedan front, the new ES is experiencing a 3-month wait on new orders.

The Lexus Spain news release doesn’t delve on individual model sales figures, but reminds us that the brand’s current lineup is 100% hybrid and that the 2020 calendar year will alter that fact with 2 new models: the battery-electric UX 300e and the “spectacular” LC 500 Cabrio.

Surging sales in the second half of the year brought Lexus’ Australian sales through November just 136 units short of breaking their all-time record of 9027 units sold in all of 2016. And sales through the first week in December are estimated to have shattered that mark.

A Lexus Australia Pressroom release notes that, as with most world markets, the NX is the most popular model line (with 355 sales in November alone). The LX posted its strongest January-November sales tally in 16 years with 396 units sold, and the ES notched its highest January-November totals in 5 years with 519 units sold (versus just 185 units last year).

China has grown too and bunch of other markets as well

The global market is getting towards luxury, within 10 - 15 years the mainstream carmakers either becoming more upscale lux side or be closed
S

maiaramdan said:
The global market is getting towards luxury, within 10 - 15 years the mainstream carmakers either becoming more upscale lux side or be closed
Click to expand...

Is the global automotive market becoming more premium (moving upmarket towards luxury) or is it merely that features that were once considered "luxury", such as leather-covered, heated and ventilated, power-assisted seats or electronic safety features, now becoming available (even standard equipment) on increasingly more vehicles, even compact and sub-compact models?

Sulu said:
Is the global automotive market becoming more premium (moving upmarket towards luxury) or is it merely that features that were once considered "luxury", such as leather-covered, heated and ventilated, power-assisted seats or electronic safety features, now becoming available (even standard equipment) on increasingly more vehicles, even compact and sub-compact models?
Click to expand...

No I mean luxury fit and finish
In 2019 alone Mazda , Subaru , Toyota , Honda among others published officially that they will move up to Premium carmakers

I may get a lot of bash but honestly from my view the current new A class is in the same quality/fit and finish as A3, 1 series, Golf, Octavia, Astra, Focus, Corolla, 3, Elantra, etc.

You won't see a major differences as previous generations of all of them, the line differentiate the lux and mainstream was gone forever die to the fierce competition

See the Palisade، Telluride, even Highlander, Explorer in competition to their lux counterpart, yes in this mid SUV segment there are still some differences here and there but that line keeps vanish by time
Last edited: Dec 21, 2019

Great news for the brand