Reviews are starting to trickle in for the limited-production Lexus RC F Track Edition, let’s take a look at the first impressions.

First up is Alex Kierstein of Autoblog with a detailed review. He notes how RC F Track Edition Chief Engineer Yuuichi Tsurumoto’s true ambitions were held back by Lexus accountants:

If corporate would just loosen the reigns, Tsurumoto and his team of engineers could have built something truly exclusive, something truly special. A real ultra-performance limited-edition RC F model for a select few hardcore enthusiasts, one with a special powertrain, extreme tires and even more aggressive weight savings. Instead, the RC F Track Edition comes off as a glorified $32,000 Sport Package.

It’s unfortunate. Lexus can do better. 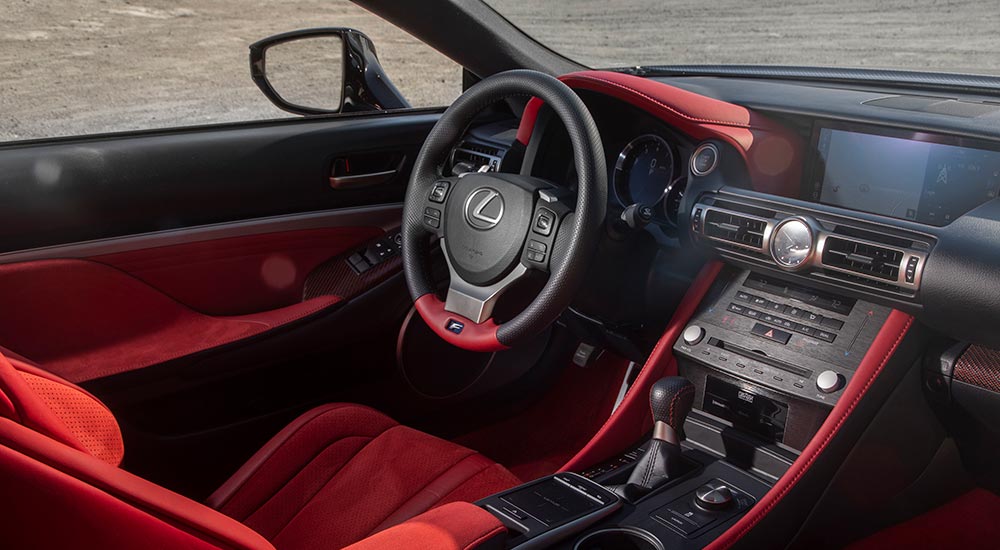 Car and Driver’s Josh Jacquot notes that his time with the RC F Track Edition was limited to nine minutes, making it difficult to render an absolute verdict:

The 2020 RC F Track Edition speaks the language of chunked rubber and gray smoke. It paints its character in broad, black swaths at corner exit and speaks its mind through titanium mufflers. It is a driver’s car in the way that only a Japanese luxury coupe can be—sharp and loud when that’s what you want, yet still mighty opulent…

It’s not, despite what its name implies, a no-compromise track car like a 911 GT3 RS or the late, great Camaro Z28. But it will tingle your frontal lobe in many of the same ways. 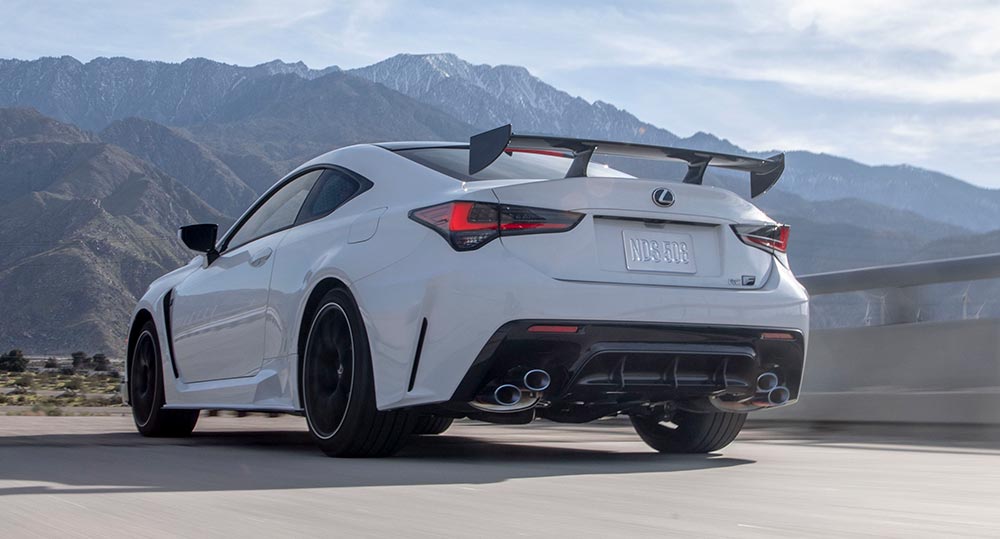 The impressions of Automobile magazine’s Nelson Ireson are quite favorable:

The updates to the 2020 model make even the standard RC F a friendlier and livelier dance partner, but the Track Edition upgrades take the RC F from track-capable to track-ready. The difference is immediately apparent and appreciated even more after a few laps have heat-soaked the brakes and left the standard car’s pedal feeling long and soft, even if they’re still plenty able to stop the car. The Track Edition’s upgraded brakes are indefatigable…

…In all, the RC F Track Edition feels like it belongs on track as much as any other luxury sport coupe in its price range, and that’s quite a compliment, considering it shares space with the BMW M4 Competition and AMG C63 S. 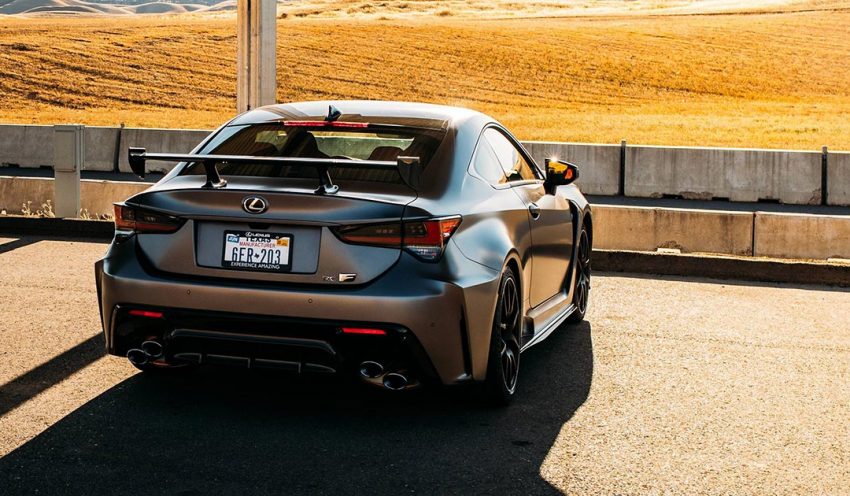 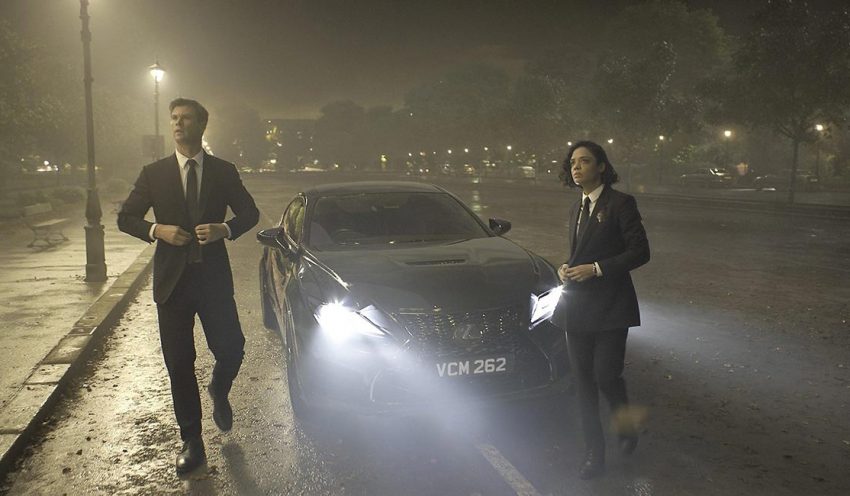 I'm getting a little perplexed by some of the responses here because I am leaving you guys information (INSIDER INFO FROM TMC). This is the third time that I am leaving the same clue all over LE. Think. About. The. Future. *sigh* since many of y'all really even bother searching the forums, I'll indirectly show you what the future in powertrain design is. Think about motorsports.

Merry Christmas......
If you guys are still unsure about where Toyota and Lexus' new powertrain technology will all be coming from, here you go. The Toyota TS050 Hybrid. 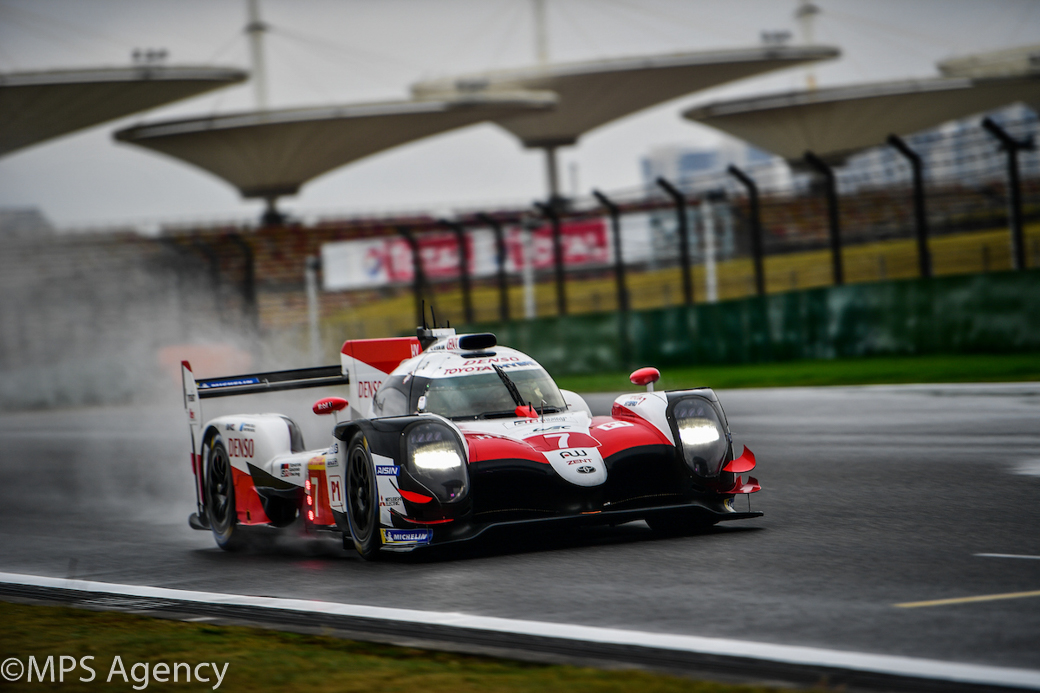 Lexus Released a teaser for the RC F TRACK EDITION 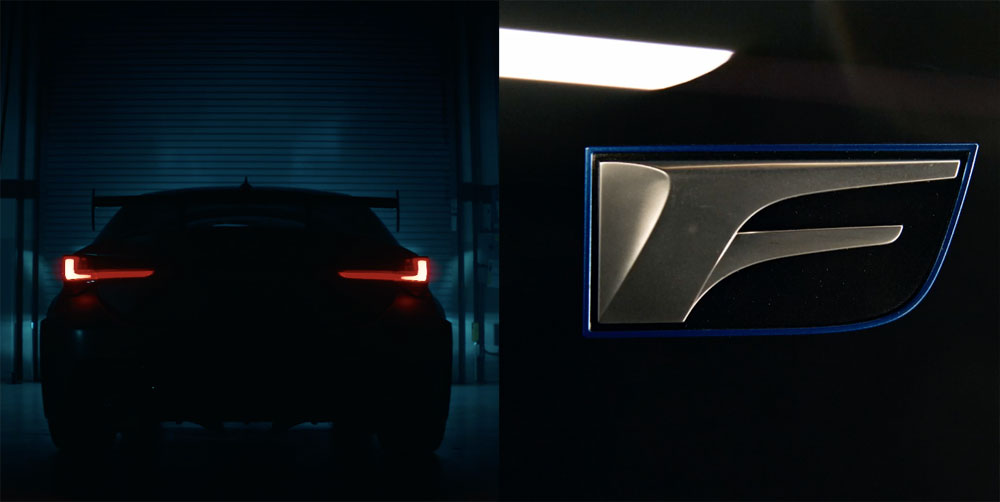 I think they should use this as advertisement what a great 15 second commercial that you could spike peoples interest not only about Lexus but the F badge.
got a good snippet of it


A video just came out, but I laughed when he said the Track only got 472HP.
Lexus said it will be the most powerful car excluding the LFA, but damn, 1hp increase over the LC500 is bizzare.

176lb lighter is a good improvement though!
They could have made this the new RCF.

Wish Lexus put the LC500 steering wheel in it, slight dissapointment.
A limited production of 60 units makes me afraid this might be the last model before the discontinue the model.
https://www.wardsauto.com/north-ame...lexus-refreshes-rc-f-debuts-new-track-edition

BUT 472? XD I HEARD EITHER FROM THIS FORUM OR SUPRAMKV FORUMS ABOUT SOMEONE MAKING A JOKE ABOUT IT BEING 472 HP.

AND AHHHHHHHHHHHHHH LORDD OMG I CANT EVEN IT HAS LAUNCH CONTROL FINALLYYYYYY. 3.96 SECONDS 0-60

AND ITS SO MUCH LIGHTER ASD WELL YEEEEEET. I WANT THIS ONE BADDDD..


YO OMG THE SUPRA IS JUST LINGERING IN THE BACK LIKE THEY DON'T CARE ANYMORE LOOOL. 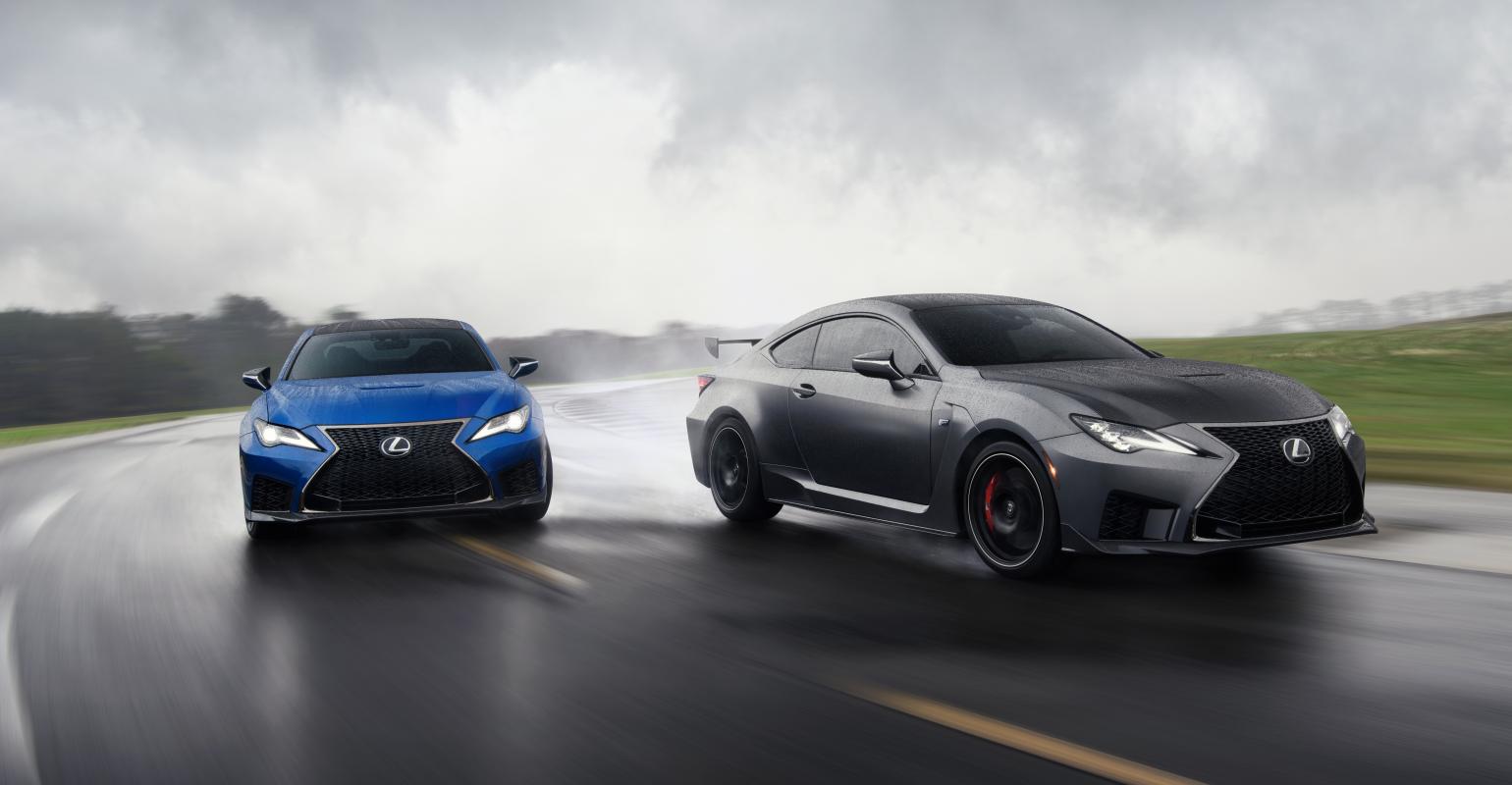 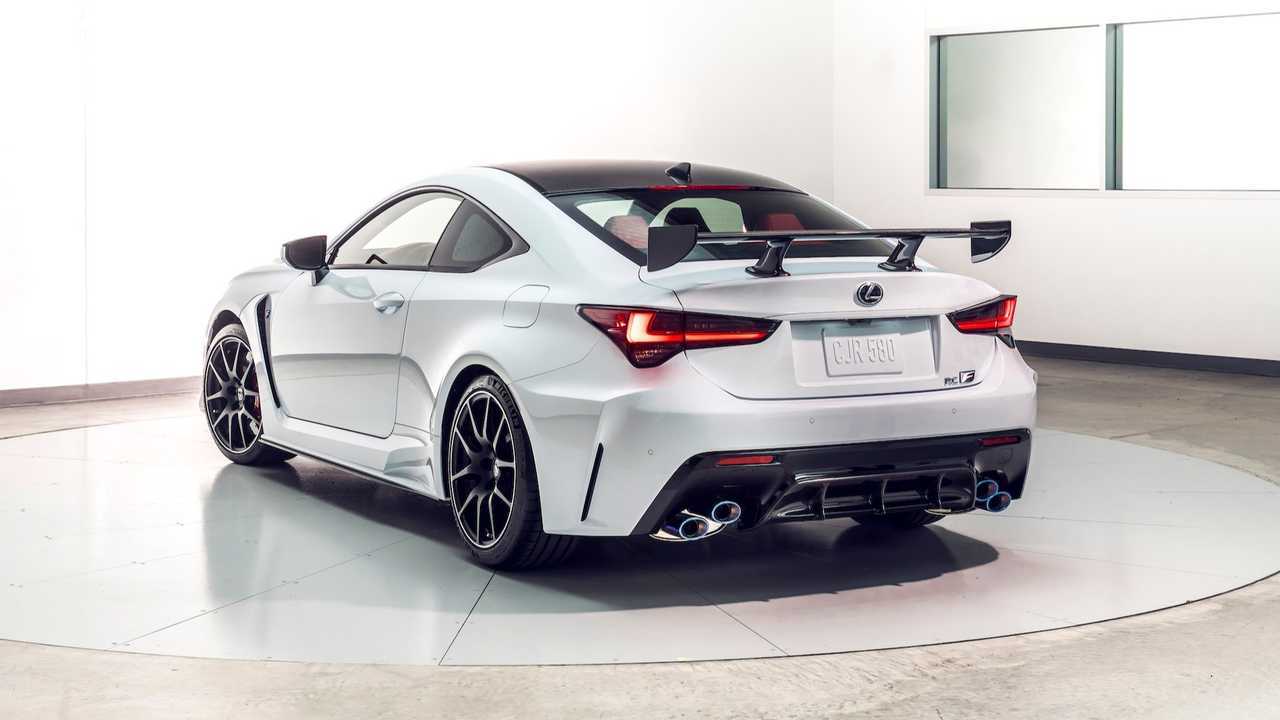 Even the standard RCF gets launch control now improving 0-60 mph by 2/10ths.

176 lbs weight drop without sacrificing practicality by taking out the rear seats (and with those heavy a** 80 lbs front seat), is very impressive.

Now imagine if they did take away the backseats, and gave it way lighter seats?

Another 150 lbs less? Lexus killed it with this car. I'm so proud of them. However I did expect more power ngl.

Agreed. Was disappointed in the 472 HP (considering a standard RCF in Asia/Europe makes 471 HP already), but they made improvements in other areas I did not expect (shorter gearing, launch control and more weight loss than I thought they would be able to).

F1 Silver Arrows
Now imagine if they did take away the backseats, and gave it way lighter seats?

Another 150 lbs less? Lexus killed it with this car. I'm so proud of them. However I did expect more power ngl.

There is weight reduction on the standard 2020 RCF s well

https://newsroom.toyota.co.jp/en/lexus/26154336.html
I saw, but it's definitely not as much as the Track Edition. What's really revolutionary is that Lexus right now showed that these two cars are a pivotal point in direction for Lexus. I remember we had a slight discussion because of my slight dislike to the RC F because of it's architecture, but it's moments like these where I told everyone before to not turn their backs on Lexus' (and Toyota's) engineering prowess. These two cars (I am more interested in the Track Edition however) show that. I am genuinely happy for Lexus.
I have to say it looks sick! I wish more HP as well but still looks so good! Now Lexus you are doing a great job with the RCF track edition and RCF and LC convertible let's not stop there! Keep the F's coming and make them on more products! I like the limited edition versions but don't get rid of the "standard" F cars. Weird to use "standard" F with Lexus now that we have a track edition! Love it!
krew 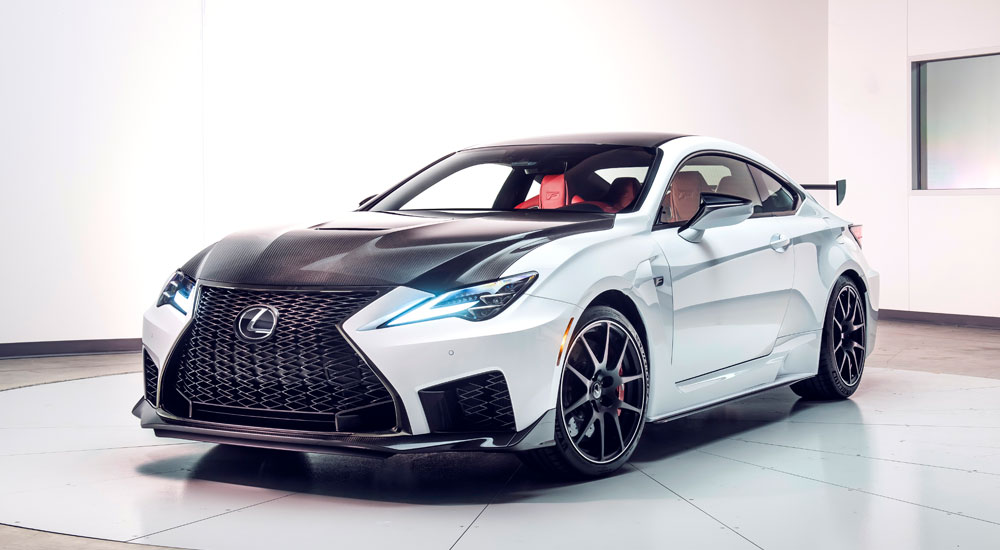 View the original article post
Overall, I am very impressed with this car. A lot of effort and R&D went into this refresh, which is awesome for such a low volume car in a market that's bullish on SUVs.

Gecko
Overall, I am very impressed with this car. A lot of effort and R&D went into this refresh, which is awesome for such a low volume car in a market that's bullish on SUVs.

I'd be very disappointed if the Supra was better...are we going to have a new thread for Supra or since it's not Lexus we won't? I'm really curious what people think of the Supra. I've talked to two different people who both loved the old Supra and were like it's eh. I think it looks cool...but back to RCF they knocked it out of the park! 10/10 on this and LC convertible.
Looks so sexy! Damn! Great job Lexus!

James
I'd be very disappointed if the Supra was better...are we going to have a new thread for Supra or since it's not Lexus we won't? I'm really curious what people think of the Supra. I've talked to two different people who both loved the old Supra and were like it's eh. I think it looks cool...but back to RCF they knocked it out of the park! 10/10 on this and LC convertible.

https://lexusenthusiast.com/forums/...thread-officially-unveiled-pg-26.2666/page-26
I love the updates. Lets be honest you can't reasonably expect much more power from this engine as a N/A. What they did do is work on the weight which everyone complains about.

Overall they literally fixed most of what people complained about. It now has the best power to weight ratio in class.
Do we have any idea on pricing for these? I would assume RCF would stay pretty much the same but how much is the track edition going to be? Up to the GSF price?
I really dig that updated rear end, but the front will take some getting used to...
I love the new 19" BBS Forged Wheels with red brakes, looks beautiful. I expected more power and a faster 0-60 time than just under 4 seconds for the Track Edition, but 4.2 for the regular RC F is still not very competitive but better. I'm proud of Lexus for being able to reduce the weight so much, but it is still overweight. Guess that's the best they could do with the Frankenstein body.
Beautiful and brilliant. Love all of the upgrades and design cues. Lexus is not giving up on performance and sex appeal (never doubted it). Its really a shame they'll only offer white and matte gray, orange would've been excellent, and an homage to the LFA Nurburgring Edition.

With the surprising release of the aggressive looking RCF Track Edition, can you guys even imagine what they have it store for the LCF?
I usually think these types of decklid spoilers and aero bits look cheap, but Lexus did an amazing job at creating a package that looks purpose built, expensive and badass all at the same time. Also, the interior with Alcantara inserts is GORGEOUS IMO: I think folks are equally divided on the RC/3IS interior - some say it's old and outdated looking, but others like the retro Japanese feel. I'm in the latter category and think the additional bits from the Track Edition make this car an instant classic.

James
Do we have any idea on pricing for these? I would assume RCF would stay pretty much the same but how much is the track edition going to be? Up to the GSF price?

Think it will be more expensive than the GSF. The track is limited to 60 cars.
Some very nice video of the details on this car:

I love the lights so cool looking! Honestly the whole car looks so damn good. great job Lexus! Keep up this mentality!