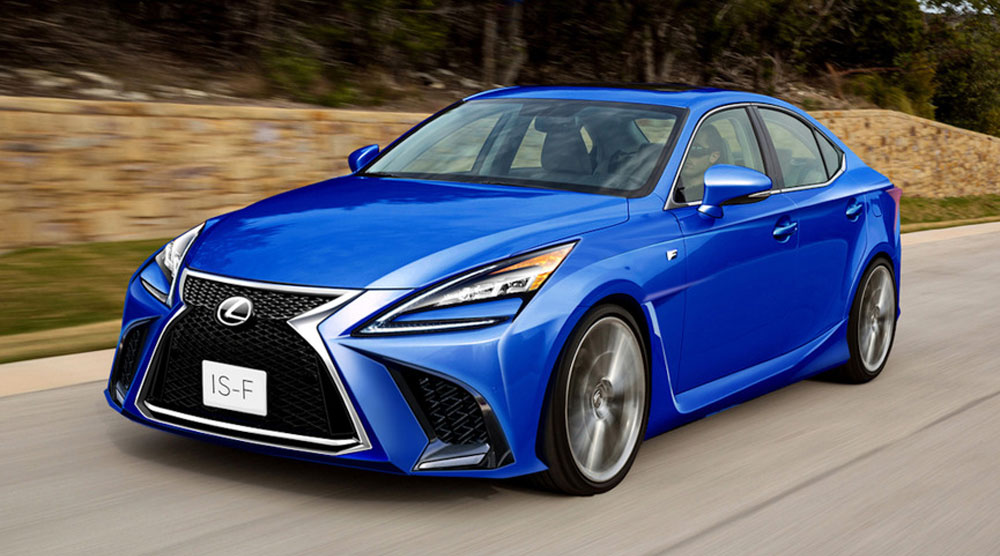 Lexus will release a new IS F sedan in 2022, according to a new report from Japanese news site Response.

The Lexus super-sedan was discontinued in 2014 in favor of the RC F coupe and GS F sedan, and brand enthusiasts have been wishing for a new version ever since. According to this latest rumor, the IS F would be powered by the 3.5L twin-turbo V6 from the fifth-generation LS 500 — if true, it’s likely this engine would require a boost over its current 416 horsepower in the LS 500, as current competitors to the IS F already surpass this number.

(Response also mentions some possible powertrain options for the next-generation IS sedan, including the 2.5L Dynamic Force hybrid engine from the UX 250h and a newly developed 2.4L turbo with 318 horespower. A 2020 release date for the new model is the latest estimate.)

Yes please!
New IS-F :D
3.5L TT V6 :confused:
Render :confounded:
Looks like someone took a flamethrower to a current generation Prius.
They would definitely need to tune the 3.5L TTV6 (if that is this rumor is true) to have higher output by putting bigger turbos or something like that to be able to compete with the Germans (and Italians now). Both the Mercedes-AMG C 63s and Alfa Romeo Giulia Quadrifoglio have over 500hp, and so will the upcoming M3 most likely.
Maybe Lexus ought to focus on Luxury rather than gunning for sporty. Lexus left that segment open for Genesis to enter, big mistake. It is still not to late for Lexus to make changes.
While I held out for an RCF sedan/ISF to show up for 2 years so that I could pick up one, I am glad I ended up getting my N/A high-rev V8 RCF afterall.:)

This is one of the worst renders I've ever seen, hands down.
I can't see the current 3.5 tt V-6 used for it. That isn't a punchy engine. Oddly I think its rated with the same HP as the original 5.0 V-8.
Next gen totally should have it IS looks so sporty it desrves the F
So...if I'm reading this correctly, the article suggests that the top trim non-F IS will ditch the V6 for a 2.4L turbo, while the twin turbo V6 will go into the F model? That means there is no Lexus equivalent of the 340i / C43 / S4 / G70 / Q50 Red Sport (ie. turbo 6 cylinder model below the M3/C63)?

krew
This is one of the worst renders I've ever seen, hands down.

This can't be overstated. That's a really sloppy render.
Looks good, hope they make a new IS F
Any rumors for the next-gen IS? It should debut this year (or last year) if it's keeping its refresh pace.

yiantony
Any rumors for the next-gen IS? It should debut this year (or last year) if it's keeping its refresh pace.

Have you read the title of this thread, and krew's post with the rumors? :)
This render is vile. However the insider information I would say is on the right track for Lexus' future, except for a mid-range model.

Ian Schmidt
Have you read the title of this thread, and krew's post with the rumors? :)

I wonder if the guys at Lexus read this forum too, hmm. And if they are, they should know that a twin turbo V6 is the only option for replacing the 2GR-FKS in the IS350. hint hint.

F1 Silver Arrows
This render is vile. However the insider information I would say is on the right track for Lexus' future, except for a mid-range model.

You think that the info on the mid-range model (ie. the 340i / S4 / C43 competitor) that article might be wrong? Just trying to clarify my understanding here, I'm interested in the 4th gen IS only if there is something like the M340i, S4, C43, G70, Q50 in the Lexus lineup.
The next IS will be DOA for all the brand