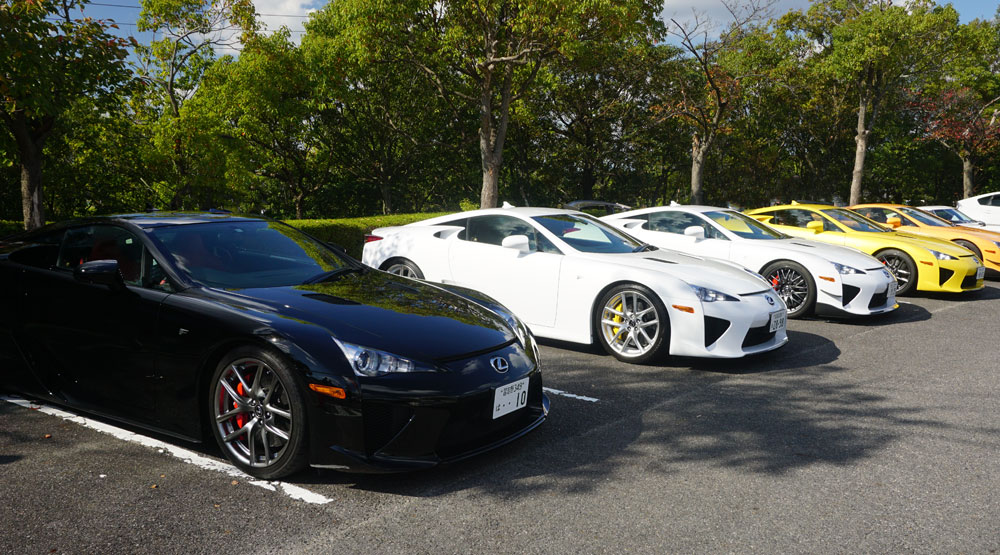 Approximately 200 LFAs were ordered in Japan, more than any other country. With such a large concentration of the limited edition supercar, it was only natural for a owners to independently organize a club to meet for driving, social and motorsports events. For their most recent meeting, the LFA Owners came together in Toyota City outside Nagoya, marking the first time for many of the members to visit the birthplace of their LFAs.

On Sunday, October 28, fifteen members and their guests began arriving at the Toyota Automobile Museum in Nagakute, near Toyota City. They had driven from across Japan, with a stable of six “standard” LFAs and three special Nürburgring Edition LFAs. A couple of owners left the LFA at home, driving their LC 500s or LS 600hLs instead. For two owners, it was a good opportunity to bring out their classic mid-60s Toyota 2000GTs.

(For Lexus fans who haven’t been following the classic car market, the 2000GT is the only Japanese production car that is now more valuable than an LFA, with ‘good’ 2000GTs selling for $1 Million US and ‘great’ ones with all the right features recently selling for a million and a half.)

Many of the owners came from Tokyo Prefecture about 250 km east of Nagoya; one was from Shiga Prefecture, between Nagoya and Kyoto, while two others drove from much further southwest. The longest drive was a 79-year-old owner who drove his Nürburgring LFA from Matsuyama Prefecture nearly 500 km (310 miles) away. This particular owner is a renowned builder of racing engines for TRD and Yamaha Motor Corp. He’s clearly very good at this, as he was able to afford an LFA. 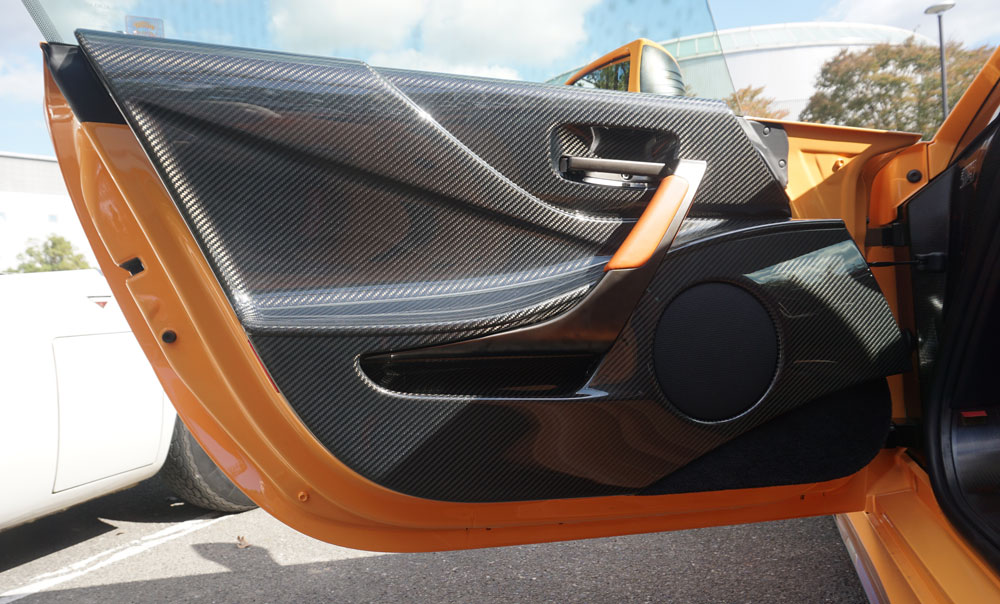 The museum staff and security rolled out the “omotenashi” (hospitality), reserving a row of parking spaces for the LFAs to be displayed. As each car arrived, the owners enjoyed meeting each other, chatting with Lexus engineers, sitting in each other’s cars, and taking photos in the beautiful fall weather. A few of the owners are over-the-top gear-heads as you might expect, but they’re not all car nuts: some are just people who appreciate unique experiences, beautiful art or really well-made things, and are able to afford them.

In addition to the former members of the LFA engineering team, another special guest was Shinji Yoshioka, powertrain designer at Yamaha Motor Corporation and the assistant chief engine designer for the LFA. A senior manager from Gazoo Racing also joined some activities, and your correspondent was generously invited to attend as a representative of the LFA project team from the USA.

When all the owners had arrived, we were met by a docent who had been assigned to greet our group and provide a special guided tour of the museum. She started with the focal point of the entry lobby, a recreation of a 1936 Toyoda AA. This is the first automobile produced by the Toyoda Loom Works before the creation of the automotive company later that year. 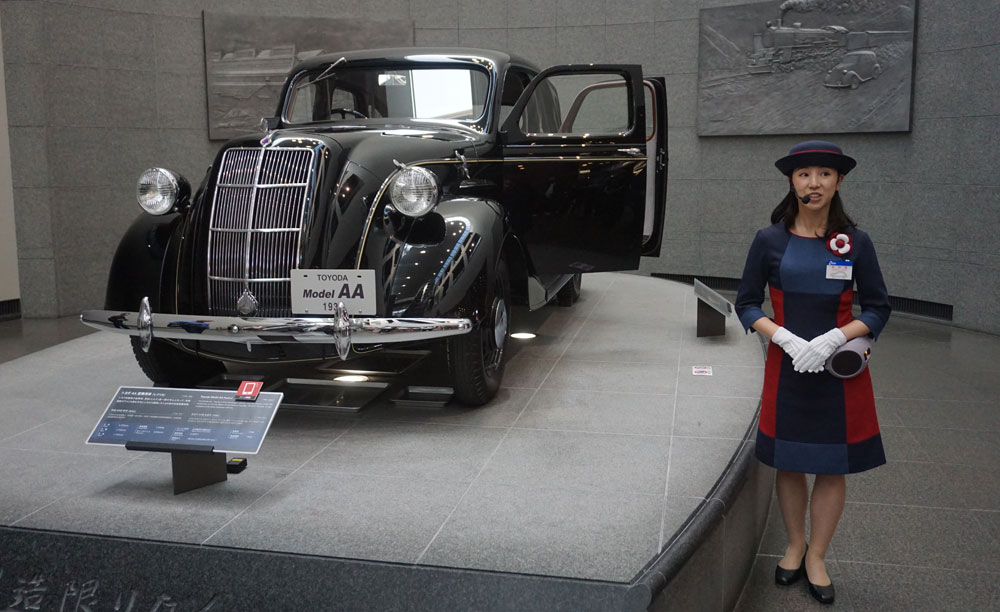 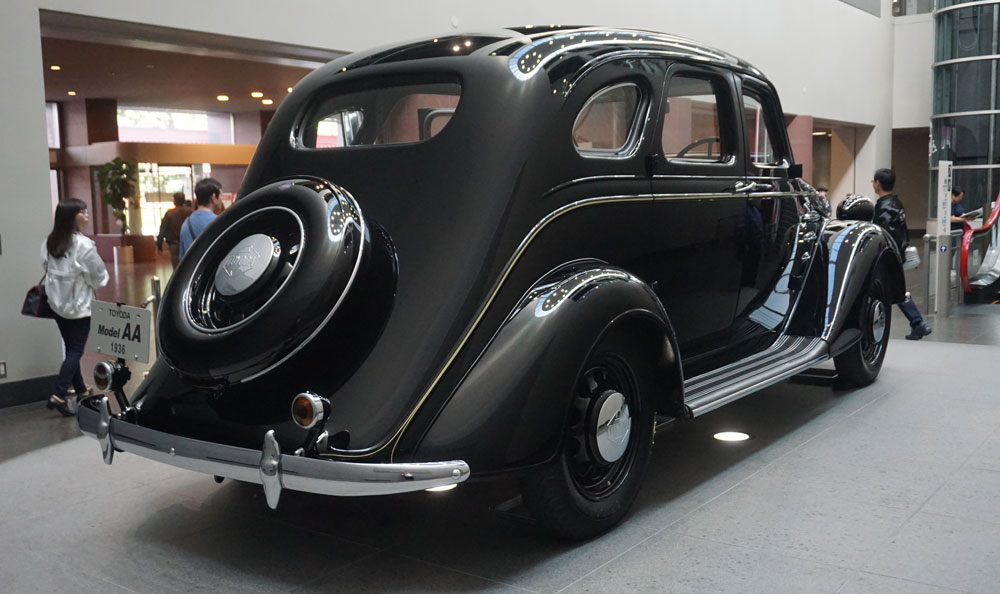 The Toyota Automobile Museum has a world-class automotive collection from the past 125 years; only a small portion are Toyota or Lexus models. The museum’s second floor exhibits follow the development of the motorcar from its origin in Europe in the 19th century through World War II, and includes rare and significant automobiles from the earliest decades.

Every car is displayed in period-correct perfection, and nearly all are maintained in running condition. The museum’s restoration shops are able to match or re-create appropriate metal finishes, paint and varnish, carpeting, upholstery and fabric wiring insulation. Many cars in the collection have earned awards at Pebble Beach or other major concours around the world.

Of particular interest is the display on early aerodynamics, and a particular pairing that brings to light the similarities between the 1934 DeSoto / Chrysler Airflow and the Toyoda AA. 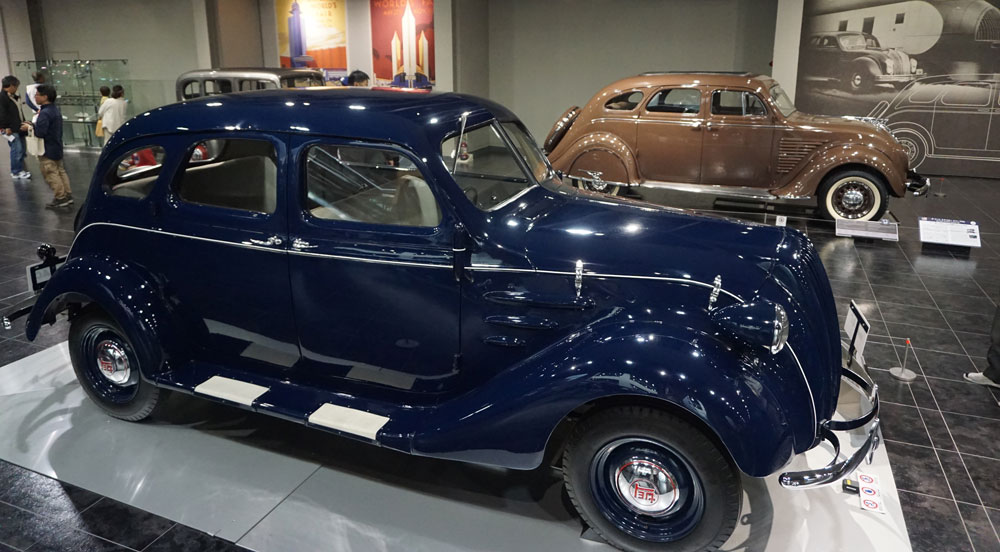 The collection on the third floor picks up with the global post-war expansion up to modern times, and includes significant American and Japanese cars from all makers.

Among the most recent displays is a multi-part diorama of the special LFA assembly line that operated at the Motomachi Assembly Plant nearby in Toyota City. The displays are mounted low to the ground so children can easily study them. 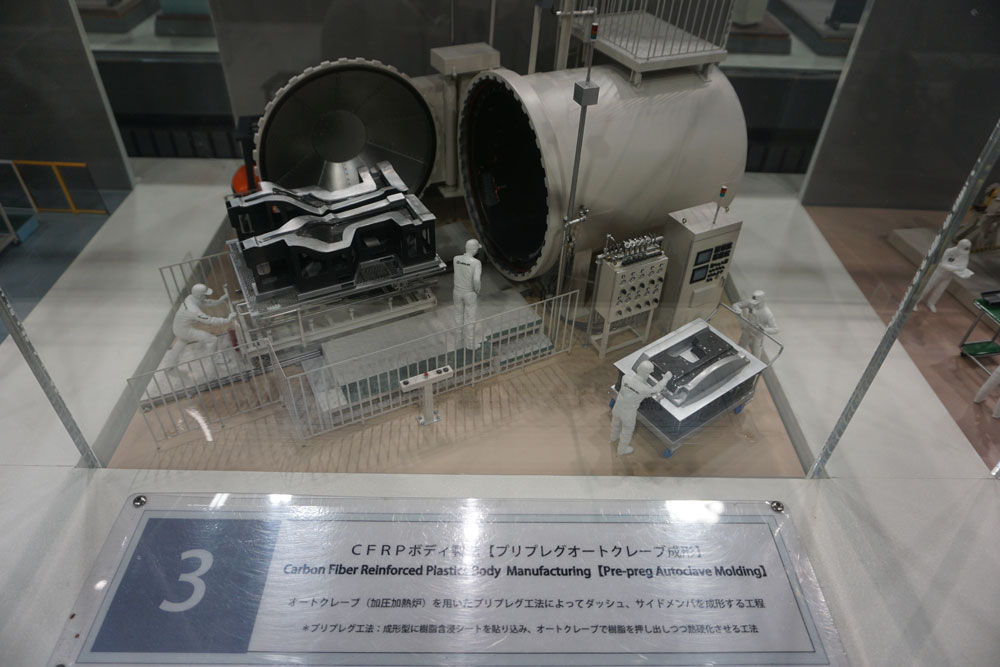 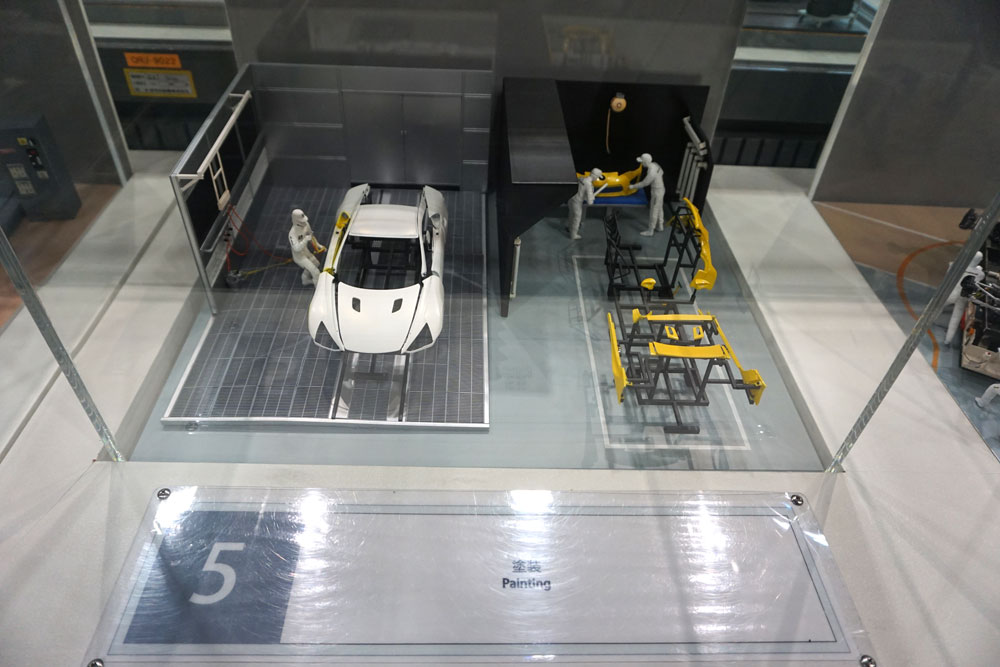 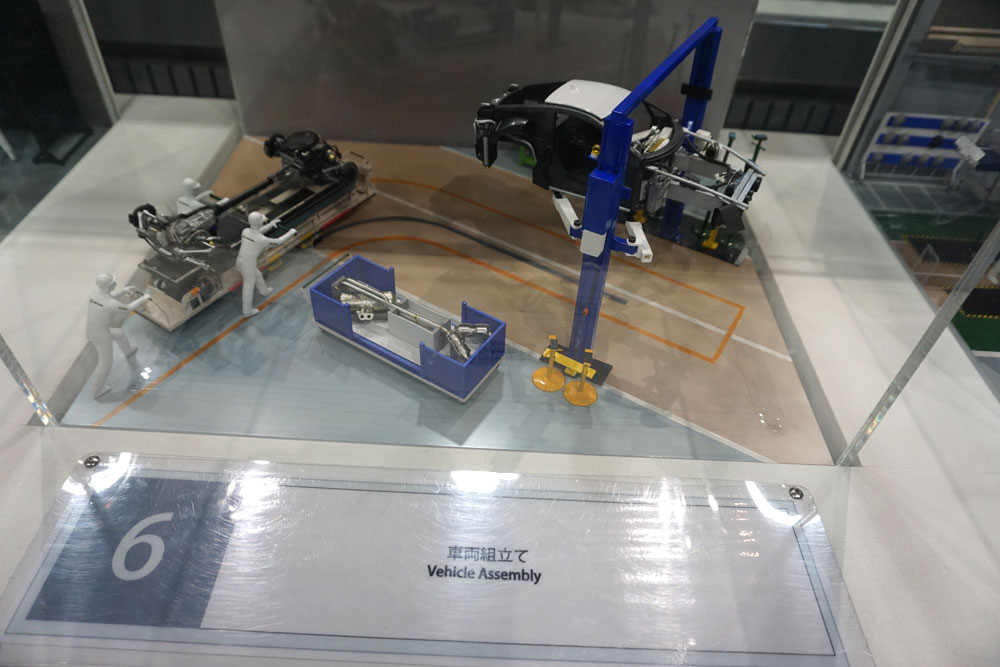 The dioramas were built by LFA team members to show how the production line at Motomachi was able to produce one LFA every work day for the total run of 500 vehicles. The models were made using parts from commercially-available 1/25-scale kits, and the engineers described to us the microscopic modifications they made to some parts to achieve the accuracy they wanted. 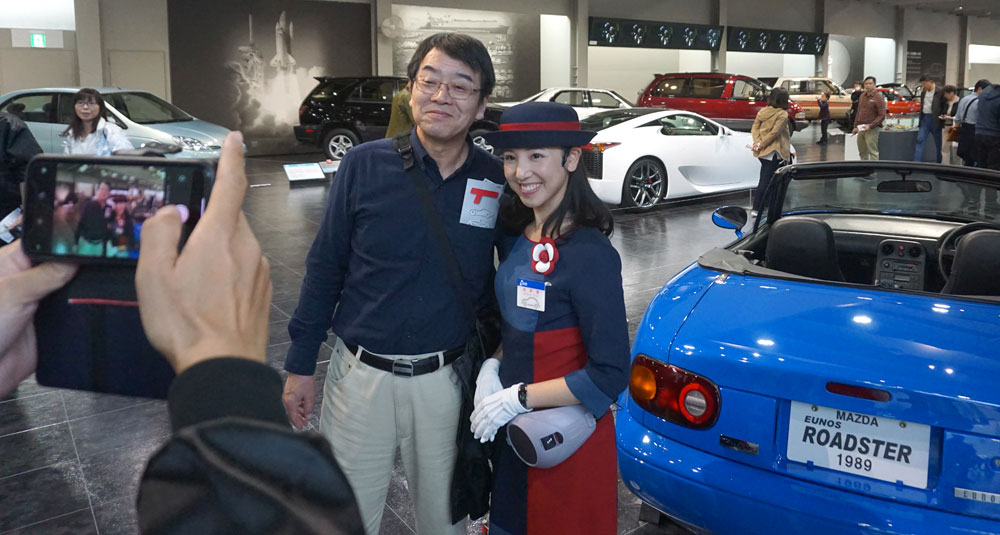 Club members toured the Museum Annex, recently re-opened as a display of the Museum’s most popular cars. Highlights included a recreation of the endurance-racing 2000GT lost to a fire after setting numerous world speed records at Fuji Speedway in 1967, and one of just two 2000GT Spiders hurriedly built for the filming of the James Bond film, “You Only Live Twice.” Museum staff graciously opened hoods for inspection and photos. 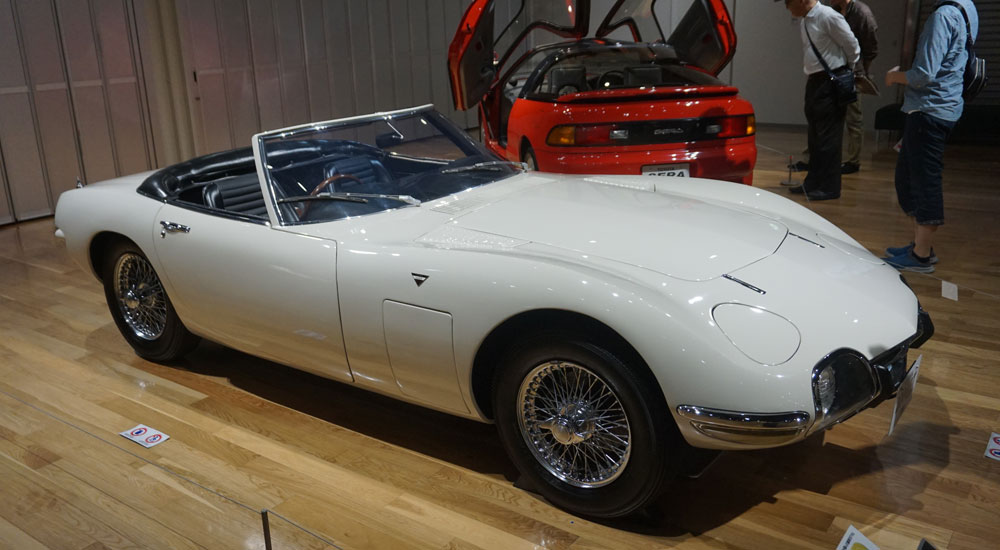 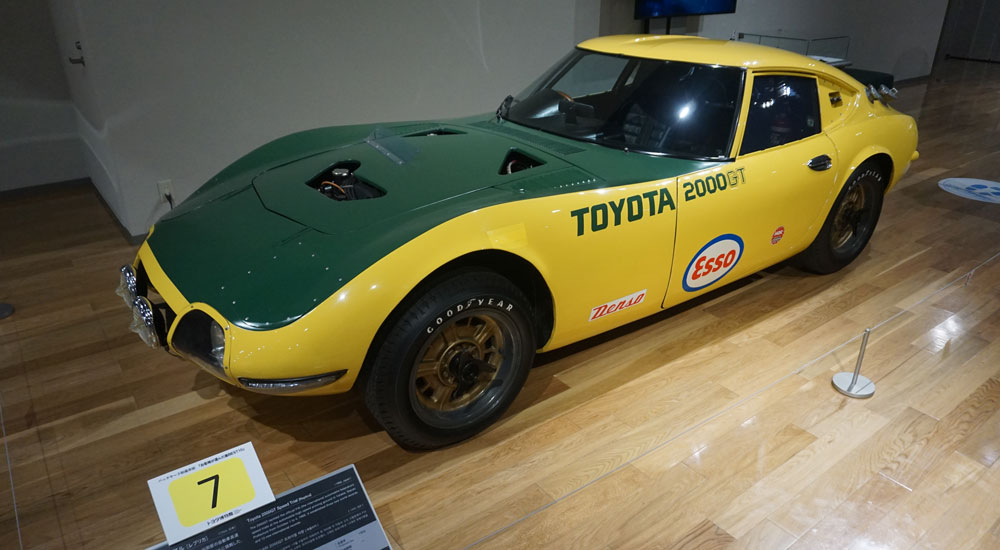 There was even one of the surviving Toyota Group 7 “CanAm” cars, a fiberglass body with a light aluminum-tube chassis powered by a thundering twin-turbo 5.0 L V8. Sadly, two drivers perished during testing in Japan and the 7s were withdrawn from racing; they never made it to the U.S. to race in the CanAm series against the other fire-breathing monsters from McLaren, Porsche and Ferrari. 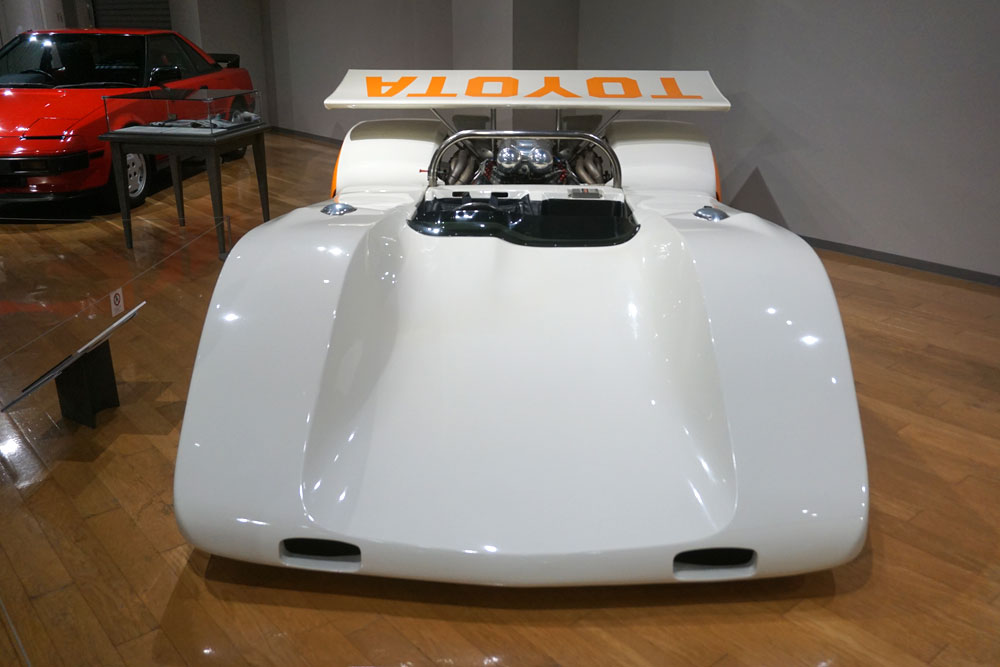 Following the thorough and informative tour of the public displays, the LFA owners met the assistant director of the Museum who led us up a back stairway for a private viewing of “The Backyard,” the fourth floor storage of extra Museum vehicles.

Among special treats not currently on display was the LFA Spider prototype and the Whitest White LFA prototype displayed at the Tokyo Motor Show in October of 2011.

A recent acquisition not yet fully prepared for display is a US-spec 1990 Lexus LS 400. The Museum also has a Panasonic-Toyota F1 car, which the staff permitted the Owners Club chairman to sit in for photos.

Finally the LFA owners descended on the Museum gift shop, cleaning out the inventory of several LFA models and getting the Chief Engineer’s autograph on various items. 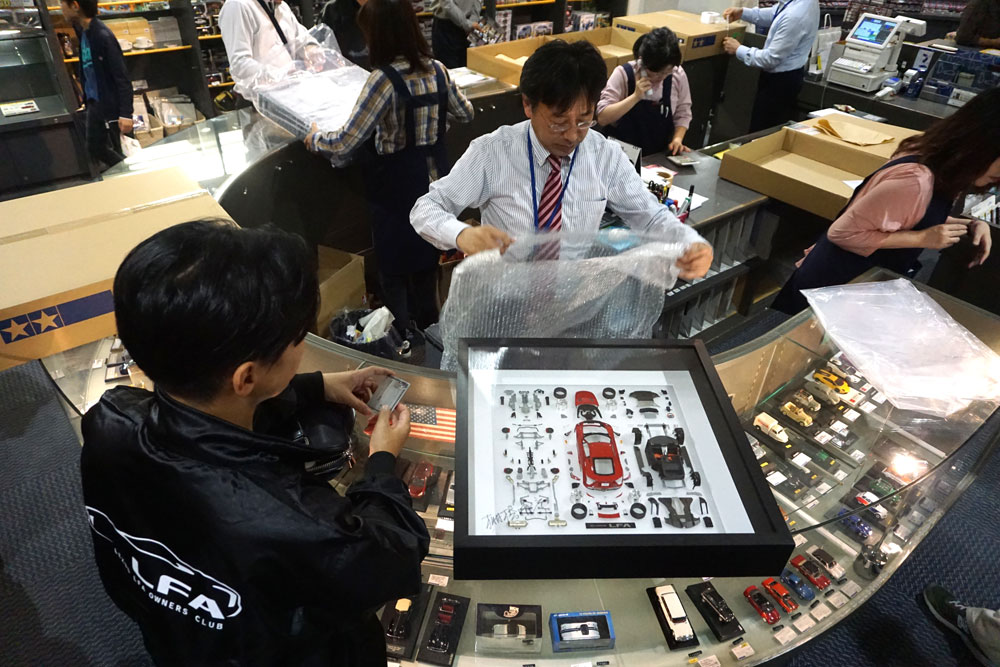 Club members then drove their LFAs to the Foresta Hills resort nearby, where a row of spaces were reserved for their cars. That evening, the group enjoyed a keiseki dinner in a tatami room at the resort restaurant, discussing many aspects of the auto business and their cars with the engineers. 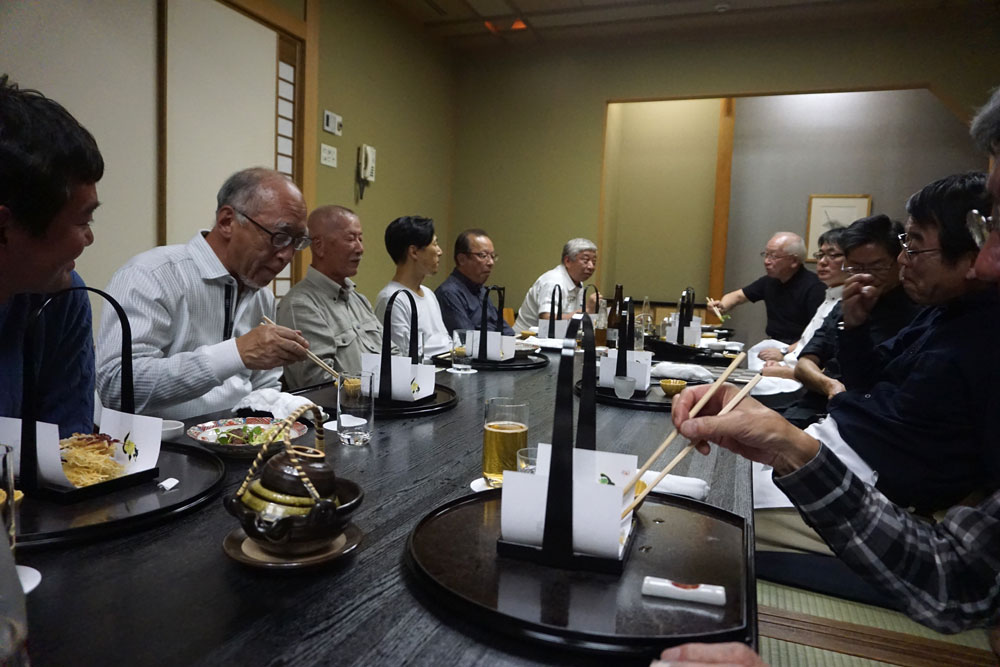 Tanahashi san described the role of the chief engineer as leading a team of one (only assistant chief engineer Tamura reported to him directly); his mission was to rally the leaders of other divisions and suppliers to provide the engineering and develop the tooling to support his project.

Tanahashi san said he was lucky that the LFA project was so appealing, as it was easier to get support from engineering development groups and production teams all over the company. Suppliers such as Yamaha, Aisin, Bridgestone, Toray (carbon fiber) and others were also excited to help.

On Monday morning, it was off to the Motomachi Plant in Toyota City.

In the parking lot, the owners compared interiors and even engine bays: several had already had their engines autographed by luminaries including Tanahashi san and one also had Morizo’s signature under his hood.

From there, we boarded Coaster buses for a detailed guided tour of the assembly line that builds the Lexus LC 500 flagship coupe. Then it was off to the location of the previous LFA assembly line, which has been reconfigured to produce the Mirai fuel-cell hybrid vehicle. Regrettably, cameras were not allowed inside the Motomachi buildings.

Leaving Toyota City, the LFAs enjoyed a long drive in the beautiful autumn weather from Toyota City to Tajimi, stopping for a group lunch at the Kamigo rest area along the expressway. The rest stop was another opportunity for the owners to compare notes and share ideas.


Arriving at the Tajimi Service Center, we were met by the general manager for a thorough tour. The new center was built to support the technical services of distributors around the world. State-of-the-art shops enable engineers to validate new diagnostic techniques, document new repair procedures, and perform complete crash diagnosis, structural repair and refinishing on existing production models or future product prototypes. 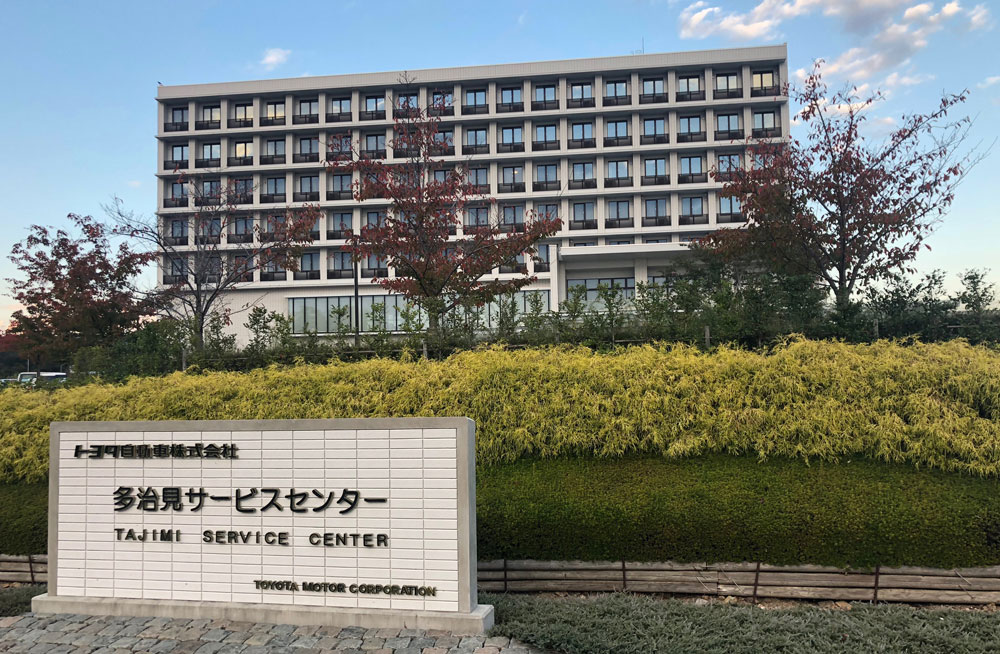 An adjacent technical training development center documents their findings and turns them into teachable classroom courses used to train service technicians, collision repair techs, and diagnostic specialists from around the world. Again, no cameras were allowed.

Among the facilities of special interest at Tajimi is the special LFA shop, which still provides technical training to distributor or retailer staff and also performs certain repairs that cannot be done effectively at a dealership, such as damage repairs. This facility houses the LFA bare rolling chassis and also displays the major components of an LFA 1LR-GUE engine.

We did several laps around the Tajimi test course in our 18-seat Coaster bus to learn about technical driving evaluation. At the on-site technician hotel for trainees nearby, some LFA owners scoured the lobby gift shop for remaining LFA items, while others studied a display of technical service tools and diagnostic technology over the decades.

Before departing this final activity for their long drives home, each LFA owner was presented with a copy of “The Art of Lexus” 25th anniversary book published by Lexus International in a special Japanese-language translation bound in black leather in a bamboo slip-cover. 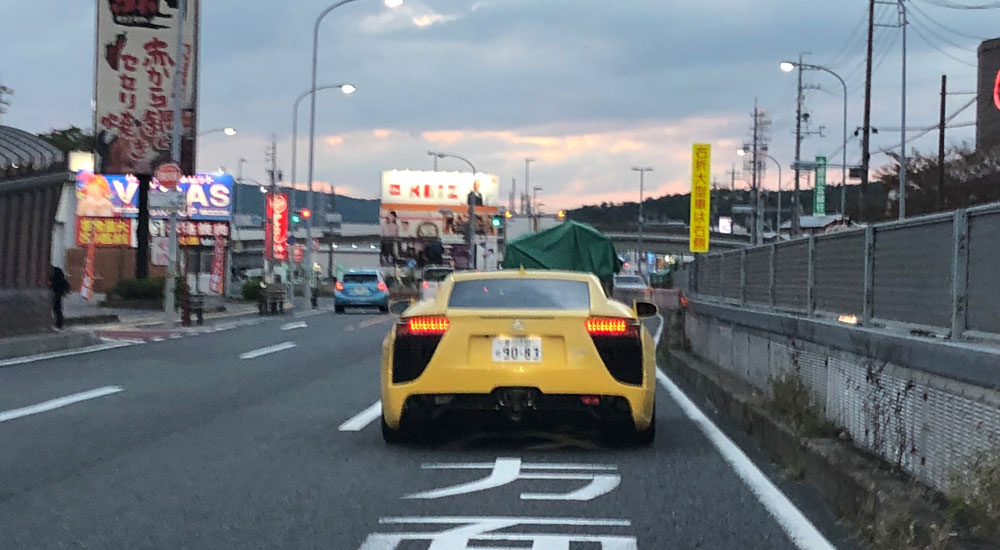 As the Lexus brand develops and performance models proliferate, clubs like the LFA Owners Club of Japan may form organically in other countries that have significant populations of LFAs and other F models. Hopefully, the Lexus distributors in those countries will be able to link with the clubs to support, sustain and encourage the owners to associate independently in the future.

Your correspondent was an early Lexus service technician and longtime owner of a first-gen SC 400. He is a charter member of the Lexus Enthusiast community currently living and working in Japan where he drives a Toyota Mark X G’s 2.5.

The Mark X is the sportiest Toyota sedan sold in Japan. It’s built on a short-wheelbase version of the GS platform and is powered by the same type 4GRFSE 2.5 L DOHC direct-injected V6 as an IS 250 or GS 250. The Gazoo Racing G’s edition for the Mark X is like an F Sport package: it has a distinctive black carbon and Alcantara interior with red stitching, special white-faced gauges, sport-tuned suspension, and the forged alloy wheels & performance tires of a GS F, along with massive GS F brakes. In Pearl White, of course.

Amazing! Lots of drool-worthy content.
Wow!
Fantastic! That museum is so amazing I almost forgot to look at the LFAs.
This is awesome! Please continue to make more badass high performance cars.

carguy420
On another note, is the Mark X and the GS seriously going away?

Sadly, it looks that way.