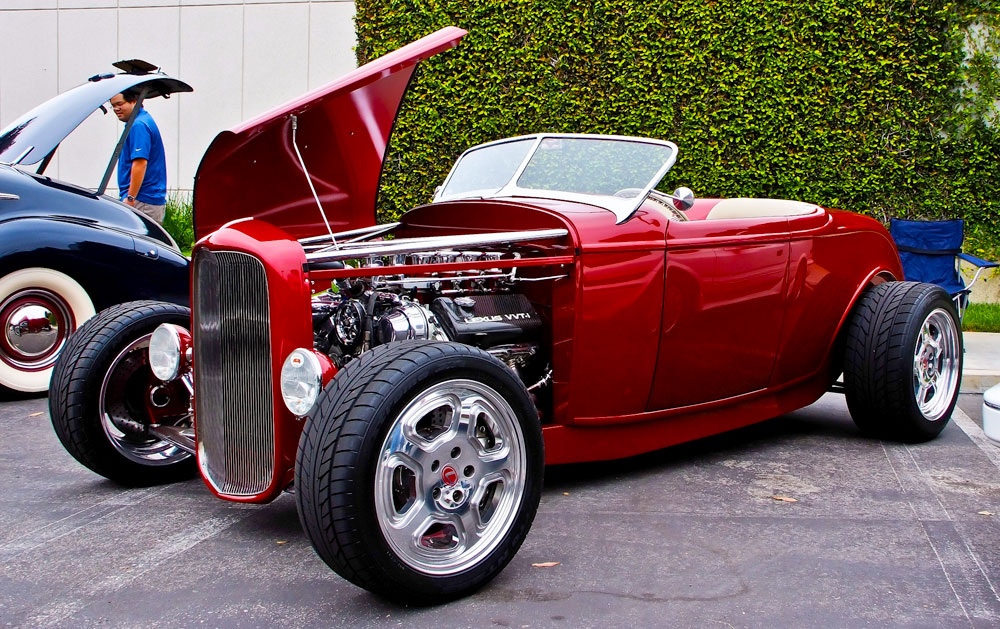 Here’s a throwback for the ages — in 1998, Lexus revealed the Street Rod concept, modeled after a 1932 Ford roadster. Amazingly, the Autoweek website has the full story:

“The concept was, Lexus was known for all those quality, dependability, reliability and comfort things but not for performance, so let’s make a performance car,” Bergsteinsson said.

The official reason for doing it was that the hot rod would serve as a promotional vehicle for the new Lexus VVTi V8, something that could be justified as a legitimate business/promotional deal. That was their only motivation, right?

Writer Mark Vaughn even got to drive the thing:

All well and good, you say, but how does it work? Anyone that has driven any other hot rod would be amazed at this Rod Millen-TRD-Lexus version. Most such cars are aimed more at show than go, and those that give any consideration to suspension tuning do so only so far as it affects straight- line performance at the drag strip. This thing, on the other hand, is amazing.

Our first drive came with Rod Millen in the passenger seat. That was understandable. No one at Lexus has been able to put a price tag on this car (“Value?” asked a PR person. “We haven’t a clue”) but it was enough that Lexus executives didn’t want just any knucklehead taking it around the block.

Pretty impressed that someone put together a video slideshow of the Lexus deuce coupe:

Ooops, didn't know about that! Funny :)
Not much of a fan myself of these 'fake' hot rods...
Has it been an official Lexus one-off prototype or was it some local custom built initiative?

Joe
Ooops, didn't know about that! Funny :)
Not much of a fan myself of these 'fake' hot rods...
Has it been an official Lexus one-off prototype or was it some local custom built initiative?

I obviously wasn't an insider when it was designed, but, from what I know about it, Lexus officially stated that it was to be a one-time project, not intended for mass-production, and something that money and resources were given to the designers for to come up with a special display to promote the company.

Also, from what I know, it was actually a joint project of Lexus, TRD, Millen Works, and California Street Rods....with California Street Rods doing much of the body/interior work (note the accurate imitiation of the '32 Ford gauges in the center of the dash). It used the GS400's power-steering system, though, with the pump relocated for clearance. (most real street rods used unassisted manual steering). The 4.0L Lexus V8 was a good choice because it made good power (especially in that tuned version) but took up little space underhood by V8 standards. Flip-up (and removable) hood panels exposed the gleaming engine-work.

From a marketing standpoint (and potentially competing Prowler), at first I was not totally convinced by Lexus's explanation that it was not intended for production. But, on the other hand, there were indeed a lot of definite signs that that non-production was indeed the case, and that the explanation was true. Unlike the Prowler, which was intended for production from the start, the Lexus was apparently not designed with any Federal safety-regulations in mind. It had no front or rear bumpers, no air bags, no headrests on the seats, no significant roll-over protection of any kind, no side-impact protection on the doors, no third safety-light in the rear......not even a rear-view mirror on the windshield. To develop a full-production version would have taken a lot more time and resources. And, of course, in a production mode, Lexus would have had to rely on California Street Rods for bodies and interiors, which would have (probably) greatly limited production. Of course, history itself ended up making that unnecessary........the Prowler fell flat on its face in the sales-department (partly from greedy dealerships), and no real competition was ever needed.
Lexus also did an interesting concept for the movie "Minority Report"

Thanks. :) I wasn't aware of that one.......first I've seen of it. The rear end looks a lot like the 2-seat Chrysler Crossfire.

View the original article post
Gorgeous! Anyone know if that was a new-fabbed body or if they used a real '32 Ford donor? Because it looks pretty authentic, not that I'm an expert.
Driving the NX 450h+